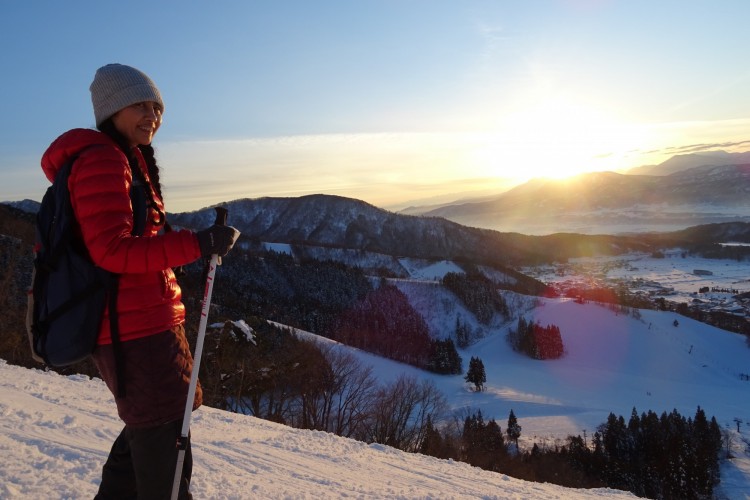 The beautiful sunset is one thing to look forward to at Nowaza Onsen. Photo: Greg Goodmacher

First Trek of the Season with Nozawa Onsen Tours

After months of hiding from COVID, every moment of my journey to the historic hot spring village known as Nozawa Onsen, Nagano prefecture, Japan, invigorated me. Five days of snow had blanketed Nozawa with two meters of clean snow. The storm, luckily, ended the night before our arrival.

Firstly, I strolled through a neighborhood developed around a slew of community hot springs on the slopes of mighty Mt. Kenashi. Octogenarians were shoveling snow away from front doors while their grandchildren precariously pushed snow off the roofs of two-story homes. 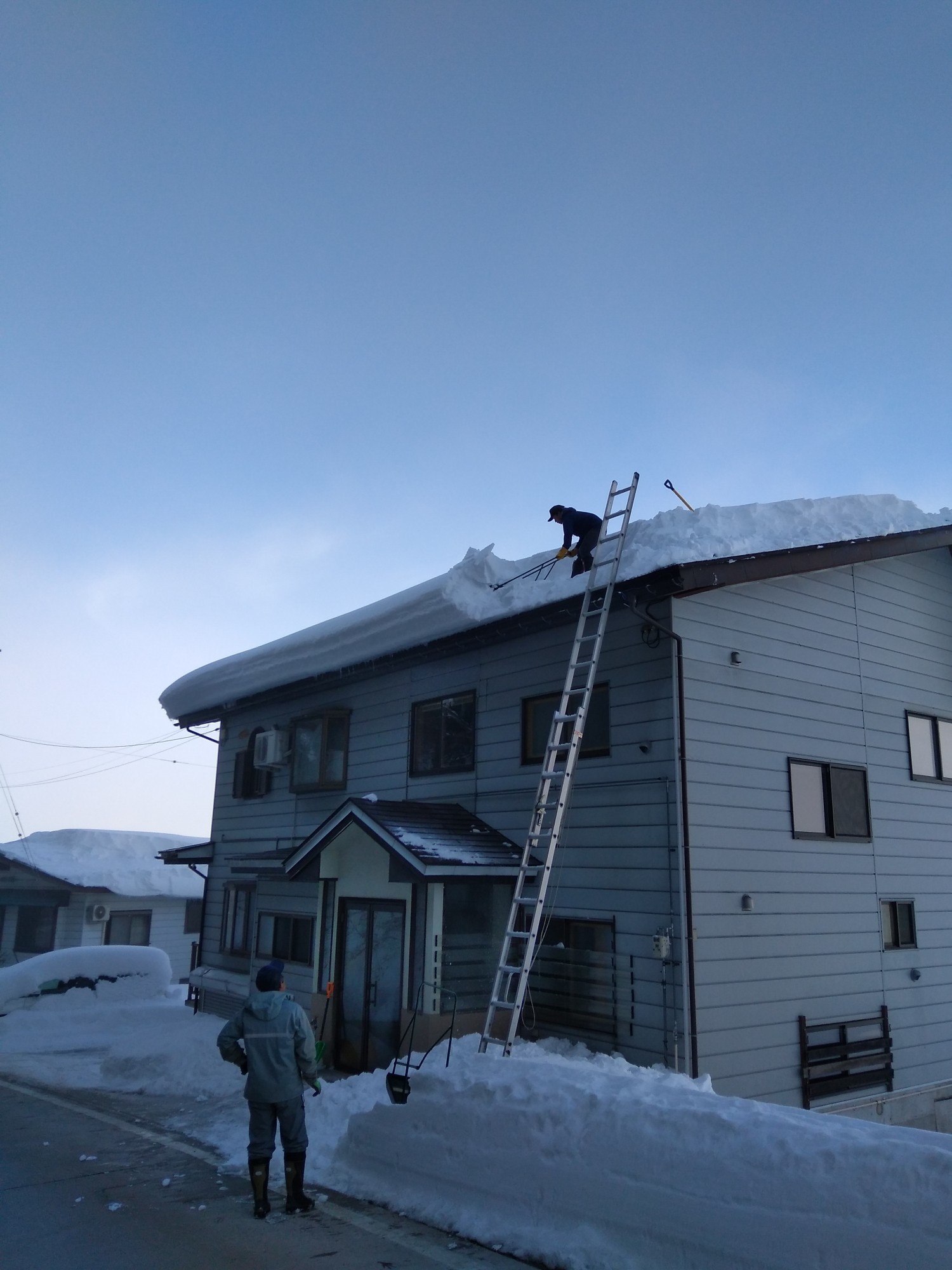 The residents pushed the new snowfall from their buildings. Photo: Greg Goodmacher

Takako Iida, my English-speaking guide from Nozawa Onsen Tours, was waiting for my wife and me at Nozawa Onsen Ski Resort’s new Nagasaka Gondola, which lifted us over 3.1 kilometers (1.9 miles) of sparkling slopes.

Meanwhile, Iida briefed us on our trip and her credentials. She is one of a few Japan Mountain Guide Association certified guides who also hold level one avalanche certification. Snowy fields, slopes, and ridges abound in Nozawa, so avalanche awareness is critical. Iida provides a variety of courses for beginners to advanced trekkers.

Moments after stepping off the gondola, we left the ski runs for a snowshoeing adventure in the quiet Nozawa Onsen woods. 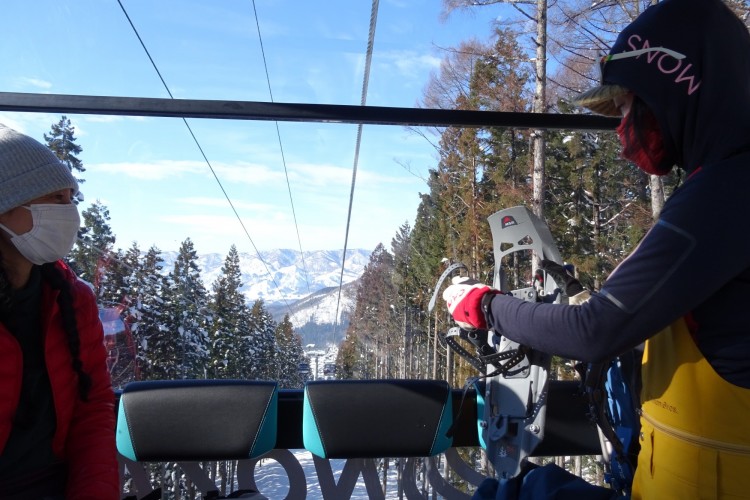 Our view while riding the Nagasaka Gondola with our tour guide. Photo: Greg Goodmacher 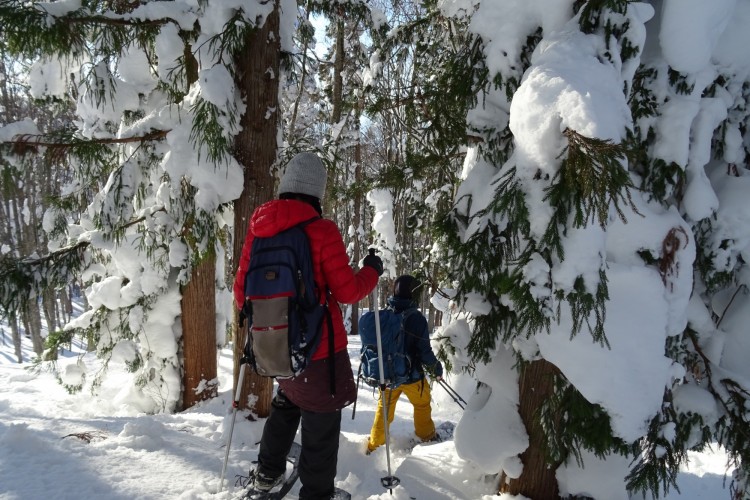 While we snowshoed, Iida San taught us to identify the bear-claw patterns ascending the trunks of beech and Japanese wingnut trees, Pterocarya rhoifolia, a member of the walnut tree family. If alone, I would never have recognized the vertical claw mark trails.

Next, rabbit tracks led us to the freshly nibbled buds of young branches. Finally, we saw trees pockmarked with Japan’s large woodpeckers’ holes and the fresh, deep footprints of Japanese serow (Capricornis crispus). This mysterious large mammal seems like a mix of antelope, deer, donkey, and goat.

Occasionally, we heard the swish of powder flying as off-piste skiers and snowboarders slipped between trees. These fast-moving animals appeared and disappeared like phantoms. But, the woods were soon silent again. 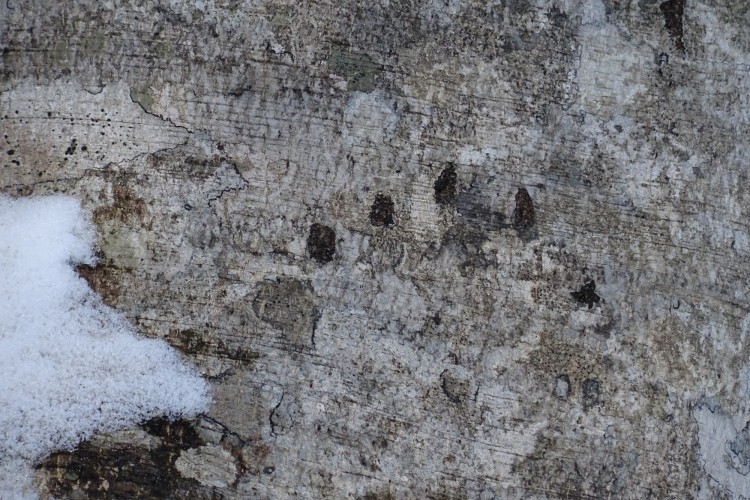 I would never have noticed the bear claw marks on this beech tree without our guide’s knowledge. Photo: Greg Goodmacher 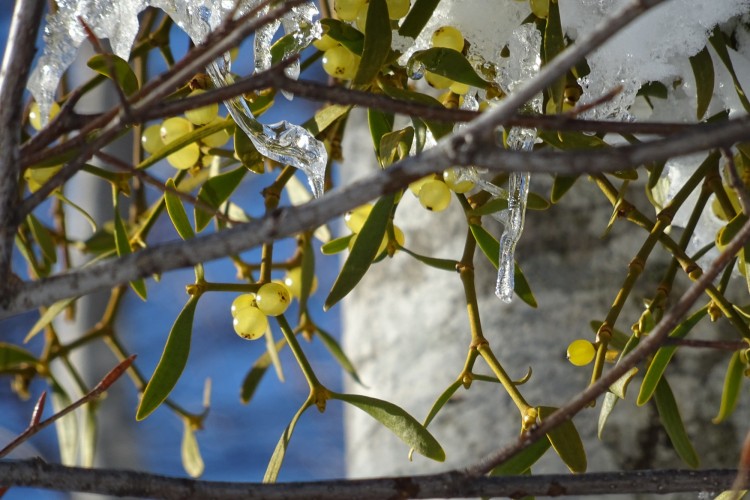 Mistletoe berries were present on the snow-filled trees on our trek. Photo: Greg Goodmacher

Taking in the Beauty

Our guide brought us to a knoll, where we sat on a dry mat and sipped steamy hot drinks. While resting, my eyes took in countless miles of monochromatic jagged snowy peaks and forests, punctuated by the white patches of distant ski resorts and villages, appearing from afar like toys.

Sufficiently rested and caffeinated, we re-entered the woods and continued through forests and dune-like snowfields to the top of the Hikage Gondola, our tour’s end destination. With an hour of blue sky and sunlight remaining, we opted to descend by snowshoe instead of the gondola. 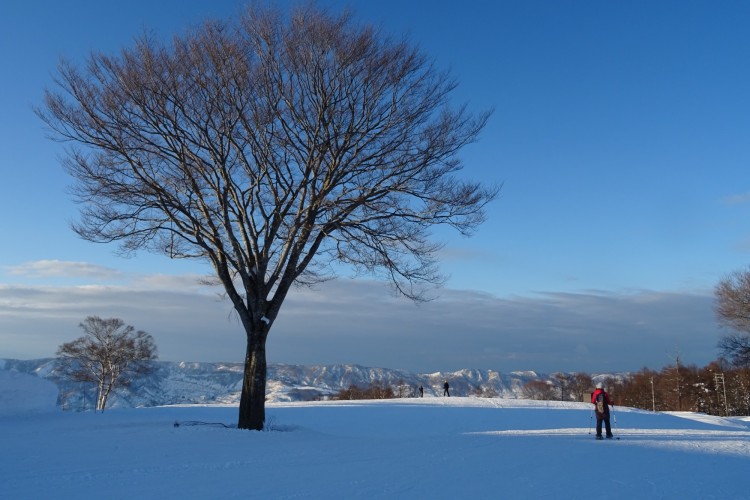 After the gondola ceased operation, the slopes became ours. As the sun descended behind another range of mountains, rosy rays of light streaked briefly upward. The temperature plunge was palpable. So, with my feet in the air, I slid for a long time on my butt, using my poles to steer and slow my fast, fun descent.

The ski resort’s bottom is the highest point of the village. En route to our hotel, we passed hip snow-country coffee shops, bars, and Japanese and foreign restaurants. Luckily, our accommodation was less than ten minutes from the bottom of Nagasaka Gondola. 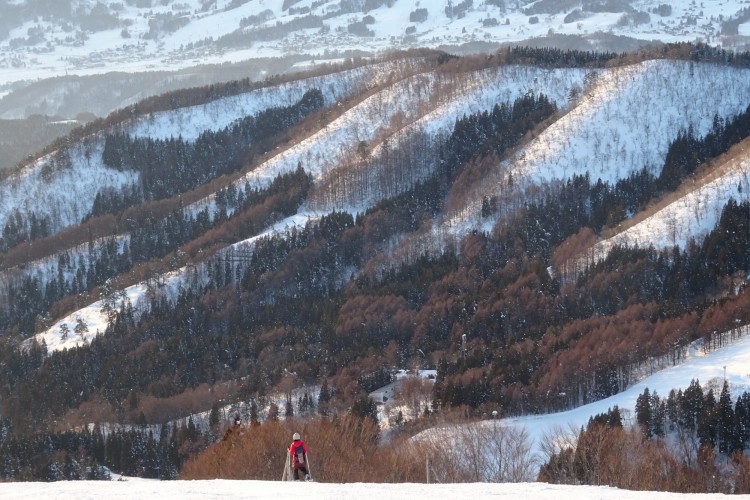 The slopes as we descended toward the village. Photo: Greg Goodmacher

The Night’s Accommodation and Hot Springs

We stayed at The Ridge Nozawa, which offers spacious Western-style apartments by the day, week, or longer. We prepared a hot meal in the fully equipped kitchen that we ate in the spacious dining room. Then, we wrapped ourselves in blankets on a comfy sofa in front of a gas fireplace while playing card games. 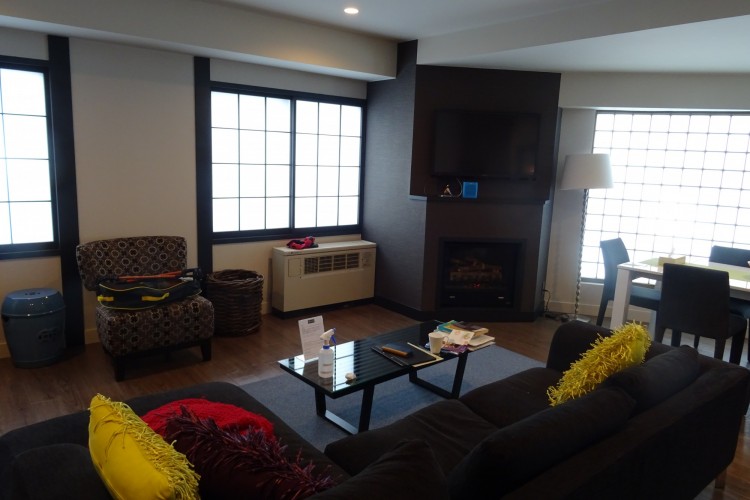 The Ridge Nozawa was a comfortable place to rest after our winter sports. Photo: Greg Goodmacher 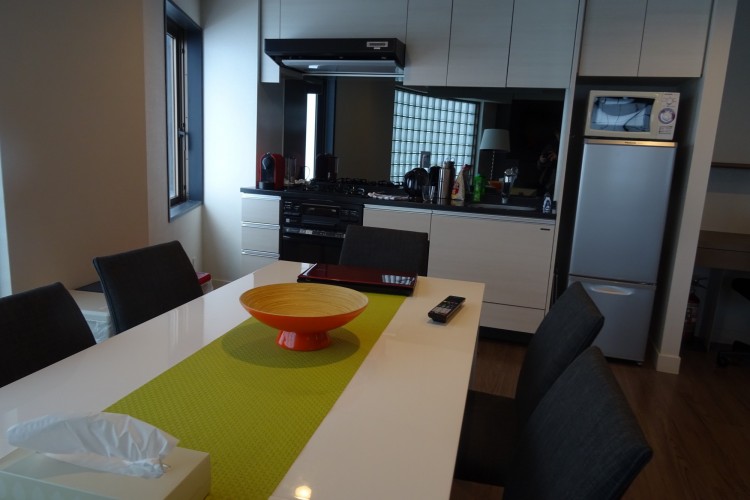 Nozawa Onsen has 13 free hot springs. Cleaning and repairing the baths are community tasks. If you want to aid with maintenance costs, drop coins or bills into collection boxes outside the onsens. 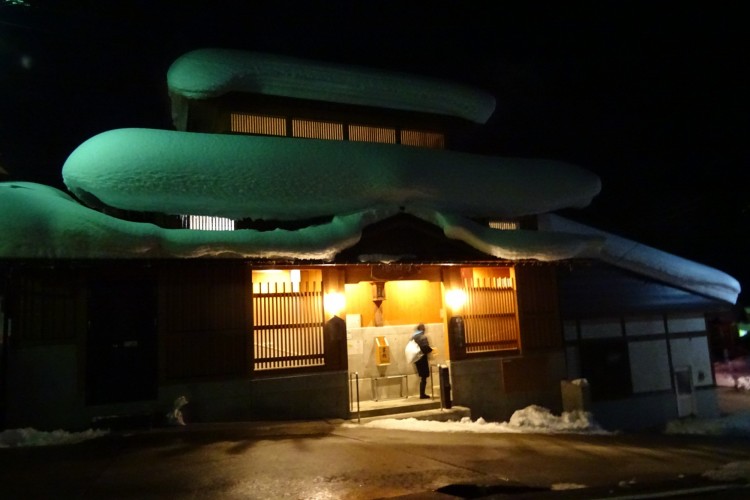 Some locals wash laundry with hot water from the hot springs. Every day, many residents boil or steam spinach and other greens and eggs in Ogamayu, a spring whose temperatures range around 90 degrees Celsius (194 degrees Fahrenheit).

Worried about the coronavirus, I decided to bathe only in uncrowded hot springs with fresh air circulation. We scanned the entrances and walked away if there were many shoes. Finally, we entered one called Jyuodo Hot Spring.

Steam billowed toward roof vents, and fresh air entered through side windows. In the roomy hot spring, only two other men bathed. The thermally heated milk white water with a slight sulfur aroma melted my stiff shoulder muscles. 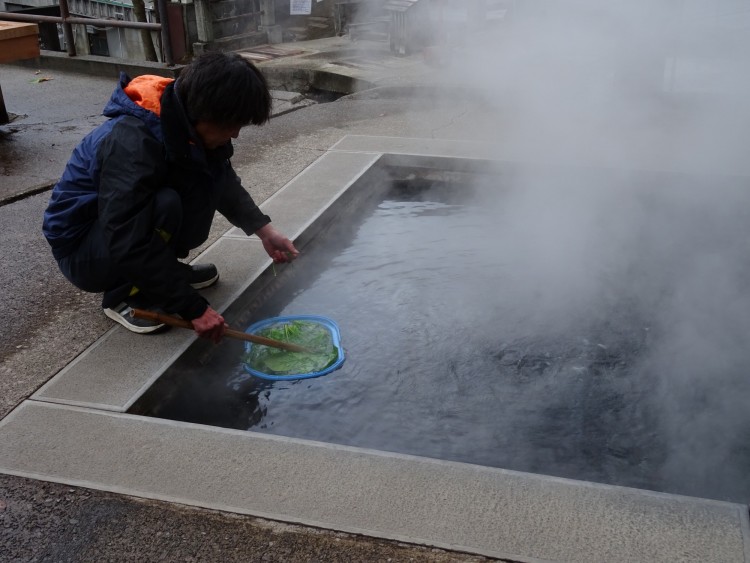 The steam can even be used for cooking spinach, as this resident does near the hot springs. Photo: Greg Goodmacher

In the morning, desiring to snowshoe and far from other people, we consulted our hotel manager, Shannon Walker, for advice. Displaying a topographical map, he suggested a few snowshoeing routes and other places to visit near Nozawa Onsen. 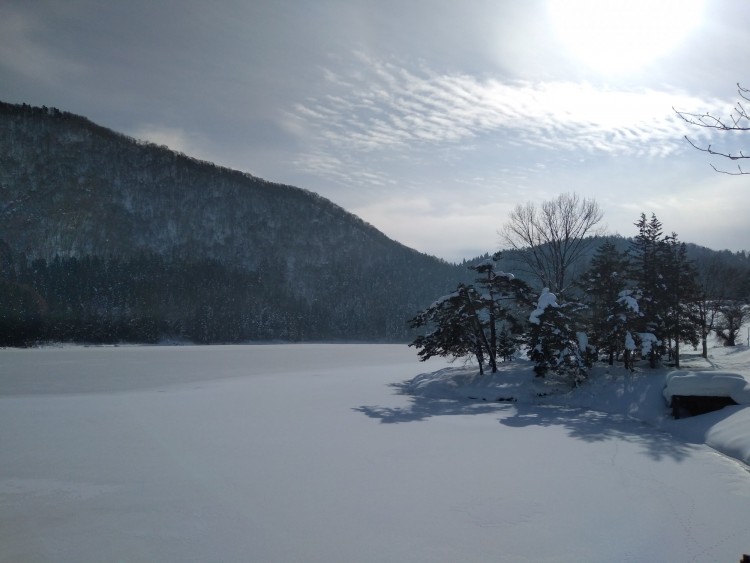 Trekking to Lake Hokuryu (Hokuryu means Northern Dragon), circling it, and then soaking at nearby Maguse Onsen became our goals. Following his helpful directions, we drove about four kilometers (2.5 miles) on a barely cleared snowy road. We passed the closed Hokuryu Ski Resort, whose white slopes were unblemished except for the tracks of rabbits, fox, and weasels. They were reclaiming territory.

A few days before, a blizzard had strewn branches and entire trees across the meandering trail. Stooping under the trunk of one toppled, I discovered a snow spider crawling on the snow. Amazingly, some spiders survive temperatures below freezing by producing chemicals that act like antifreeze. 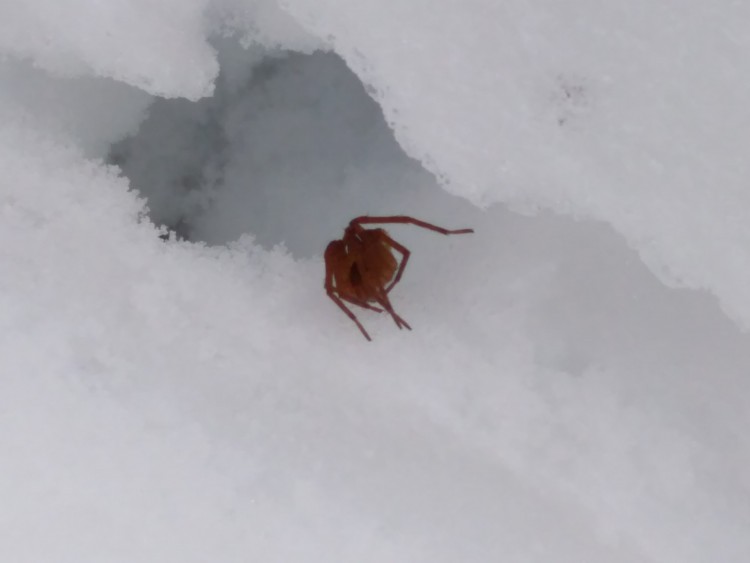 An unexpected snow spider on the trail. Photo: Greg Goodmacher

Thirty minutes later, we exited the forest trail into a wide-open bowl held in the mountain’s fingers. A mythical dragon lay beneath the snow-dusted flat frozen lake. Here, too, lines of animal trails crossed the surface, and impressive tree shadows stretched quietly over the ice.

The idea of testing the thickness of the ice to discern if I could walk across the lake seemed like a great idea. Still, my wife, perhaps wisely, discouraged me. She sped off instead on a circular survey of the area. Then, I followed, scrambling over the limbs of one more giant tree whose being had been split apart by the forces of ice, snow, and gale-force winds a few days ago. 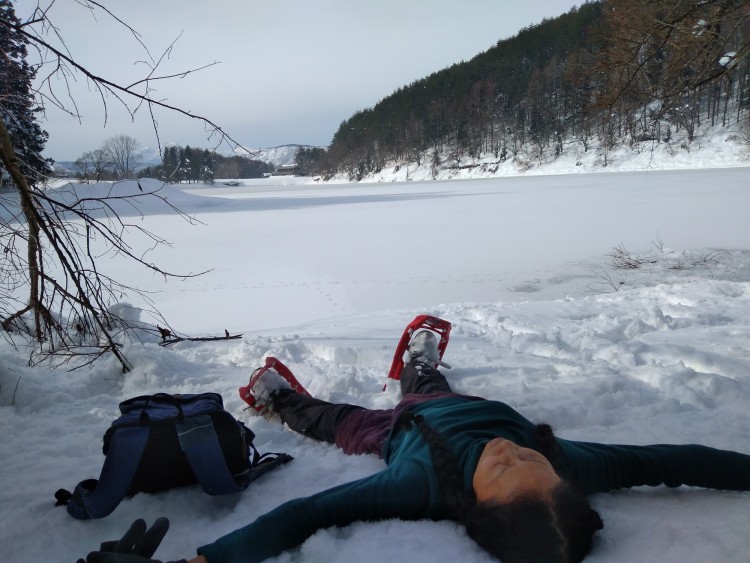 Near the lake, we decided to take a break to relax. Photo: Greg Goodmacher

A Breath of Fresh Air

Now, the air was as calm and clear as the environment was making me feel. A signboard announced that we were exploring the Forest of Kosuge Lake Hokuryu Therapy Road.

There was no trash, no car sounds, no one else, but placed along the trail were statues of ancient Chinese and Japanese gods and spirits. The small shrines, tiny temples, and statues of deities in Japanese parks turn hikes into cultural explorations. 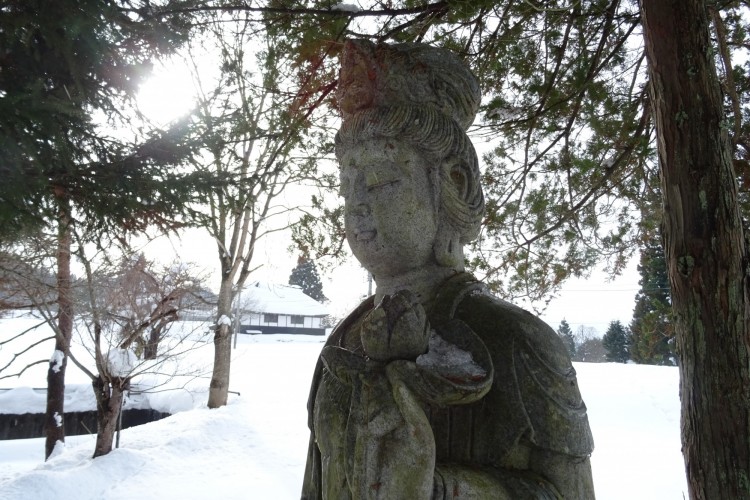 The silent statue by the lake. Photo: Greg Goodmacher

We walked for around an hour, discovering wonders around each curve until we returned to our starting point. In the distance, I saw the silhouette of a woman alone by the lakeshore behind some trees. Surprised and curious, I approached for a brief friendly conversation. But, it turned out she was a life-sized statue. Perhaps, she had something to do with love.

From above, Northern Dragon Lake looks like a heart. People say that visiting the lake and crossing a bridge to a small island will bring love into one’s life or deepen a love that already exists. It must have worked. My wife and I had a very harmonious journey together.

After Northern Dragon, it was time to continue that journey by going to Maguse Onsen. Many onsen connoisseurs judge Maguse to be the best in Eastern Japan. Immediately after seeing a photograph of the outdoor bath, I was hooked. I had no choice but to bathe in its thermal waters.

The bath was stunning. After paying 500 yen, less than $5.00, I walked from the parking lot down a snowy staircase to a simple wooden changing room on the edge of a mountain. I undressed and walked outside with a tiny towel. Simultaneously, the only other person in the bath walked inside, leaving me alone in the men’s section. 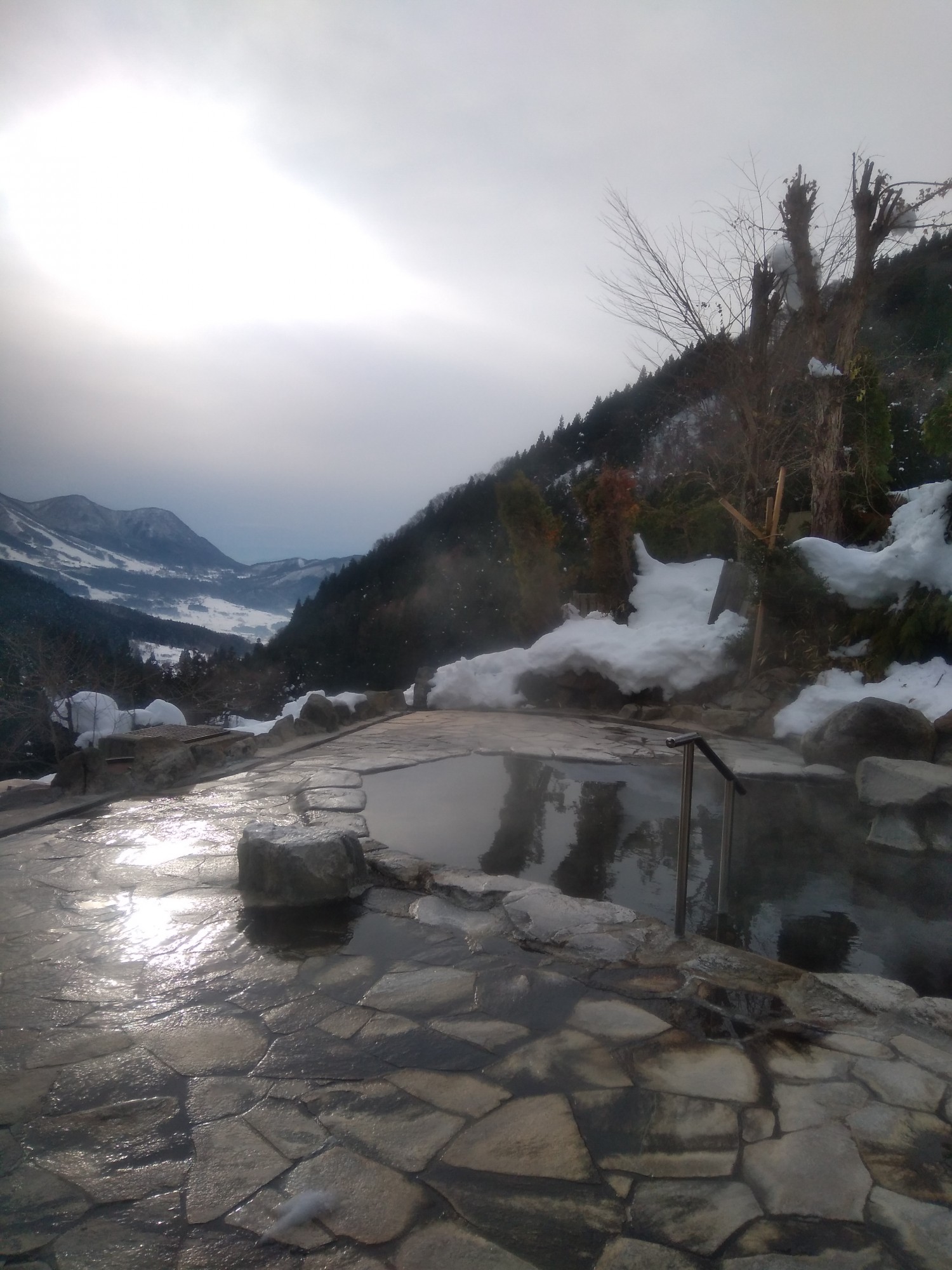 The elevation is 700 meters (2296.59 feet). The water was as clean as the sky, so the Northern Japanese Alps appeared clearly in front of me. Kijimadairi Ski Resort was visible. Though surrounded by snow, I was comfortably warm as the water is under 40 degrees (104 Fahrenheit).

If I had had more time, I could have spent the night in one of the hotel rooms and have enjoyed an indoor bath, but with plans to hike elsewhere, we drove away. I will definitely return to Nozawa. 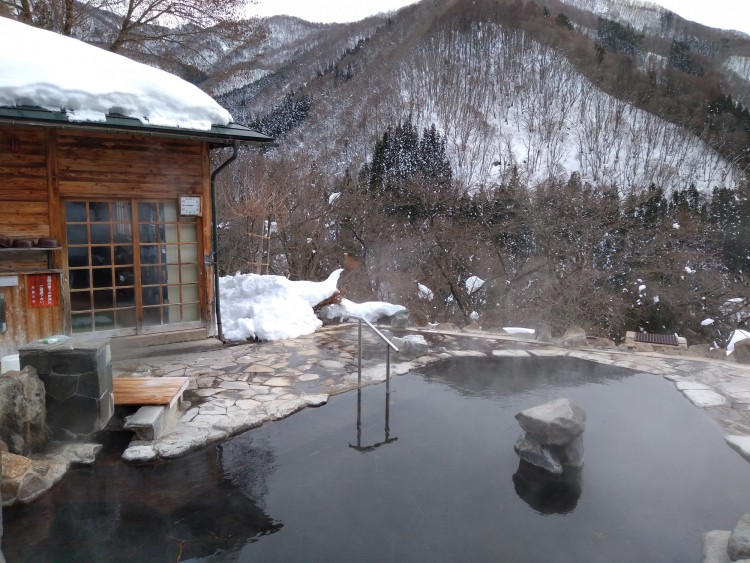 The bath and changing room at Maguse Onsen had a stunning view. Photo: Greg Goodmacher

For a trip similar to the one here, contact Nozawa Onsen Tours for details about snowshoeing tours in and around Nozawa Onsen.

From Nozawa Onsen, drive 25 minutes on winding mountain roads that can be slippery and dangerous in winter. However, if you are unfamiliar or uncomfortable driving in such conditions, take a taxi from Nozawa Onsen.

Getting to Nozawa Onsen from Tokyo

You can ride the Shinkansen (Japan’s famous bullet train) to Iiyama Station. After the train, you can board a bus to Nozawa or share private taxis, buses, and vans. These options pick passengers up at Narita or Haneda Airport and drop them off anywhere in Nozawa.

While in Nozawa, you can experience sensory pleasures such as claw-scratched bark, a frozen lake under a pure blue sky, the whooshing sound of a passing off-piste snowboarder cutting fresh powder trails between trees, crisp air, and soothing hot springs.

So, would you visit this area? Further, if you’ve been, what are your tips for visiting Nozawa Onsen and your favorite snowshoeing areas? Please share your insights in the comments below.

The author received a discounted stay at The Ridge. His review of the comfort and spaciousness of the accommodations is his honest evaluation.

Read Next:
Snowshoeing Amidst Japanese Snow Monsters
Snowshoeing for Beginners: The First-Timers Guide
Your Brain on Nature: A Book Review of ‘The Nature Fix’