The pandemic kept me home but introduced me to views as gorgeous as anywhere on Earth. Worried about traveling and contracting COVID, I never strayed far from my house last winter. For most of my life, I mistakenly believed hours of traveling were necessary for memorable experiences, so I ignored local areas.

But one unusually sunny day, my wife impulsively suggested we grab our snowshoe gear and dog, pick up lunch, and see what we find where the snowplows stopped plowing. We decided to snowshoe on the road we usually drive to reach cool forests during the hot, muggy summer. It cuts through valleys with rivers and ends at a dam. 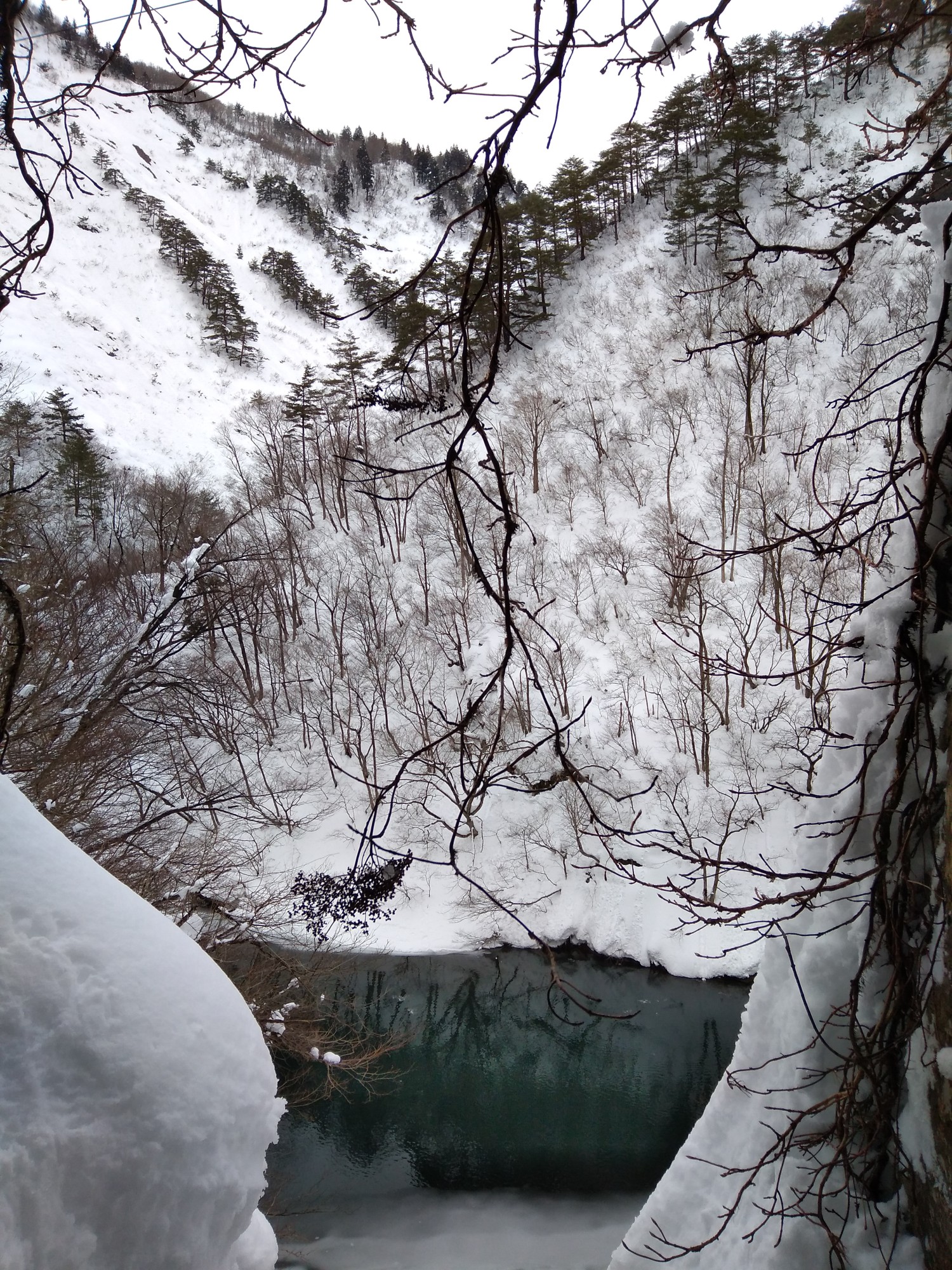 We live in rural Northern Japan, where a freshly roasted sweet potato is an affordable, healthy, and delicious snack sold at many supermarkets. After driving up a winding mountain road until snow blocked our path, we ate the toasty potatoes while sitting in the middle of sun-warmed Route 335, also known as Takidani Kami Akadani (roughly translated as Waterfall Valley in the Upper Red Valley), in Shibata City.

Then, we carefully placed our fifteen-year-old miniature pinscher and her hot-water bottle in her doggy backpack. Her tiny head stuck out, and she gazed in astonishment at several meters of snow on the ground. 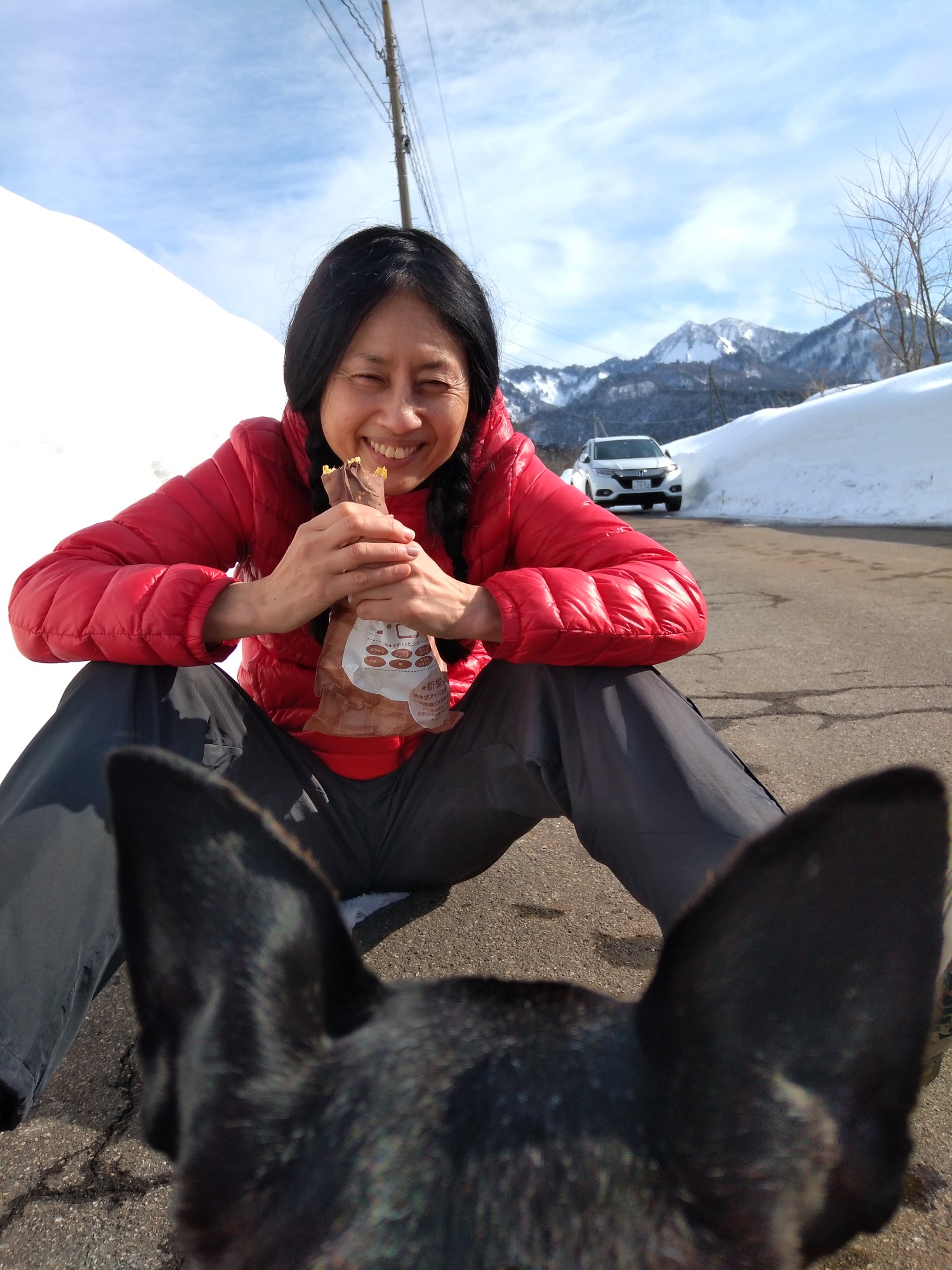 We climbed a snow-packed slope created by the weight of previous snowshoers and walked between the cedar-tree-fringed sides of the road far below our feet. The route curved and steepened. Then, a solitary snowshoer carrying a camera with a lens about two feet long appeared from around a bend. “Get any good shots?” I asked. Grinning, he replied, “Up the road, the icicles on the cliffs are impressive, and the views both in and from the tunnel are great.”

Expectantly, my wife and I trekked forward, and we were soon on the edge of a valley. On the mountainous side, icicles as thick as my arms protruded from cracks in rocks. The rumbles of an unseen river reached our ears through the trees on the slope leading downward.

The river’s song grew louder as we moved onward. And the slope to the left of our path descended more steeply as the road curved. Then, finally, through a gap in the trees, a long rocky wall on the other side of the gorge appeared. Five-, six-, maybe even eight-meter-long silvery icicles and patches of white snow were dripping from the dark rocky face. It looked almost as if a giant had dangled lace over the cliff. A waterfall also cascaded downward.

I moved to peer over the snow cornice at the river below, but my sensible wife reminded me of the danger of an avalanche. 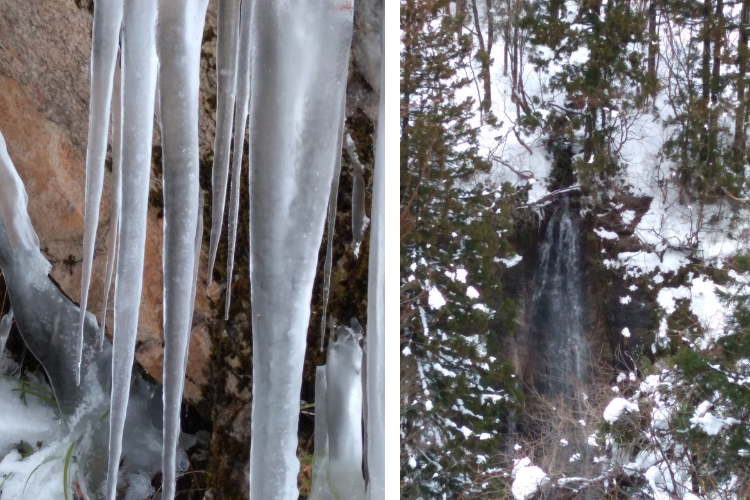 L: Thick icicles stood along the path. R: A waterfall cascaded down from the cliff. Photos: Greg Goodmacher

We just stared in awe at the perpendicular cliff decorated with more icicles than I had ever seen. Then, finally, we remembered the tunnel the other snowshoer had mentioned, and realizing that the sun would soon fall behind the mountains and temperatures would plummet, we sped up.

The path gracefully swerved, and we saw more icicles around each bend. The icicle-decorated wall stretched for several kilometers. Then, the Higashi Akadani (East Red Valley) Dam Tunnel appeared.

Bizarrely, despite four meters (twelve feet) of snow and the lack of vehicles, a streetlight flashed from red to yellow to green at the entrance.

We descended into the old, narrow, open-road tunnel and let our dog walk freely where the ice and snow were not too deep. My cute dog seemed to be happy.

Read More: Benefits and Tips for Snowshoeing With Pets 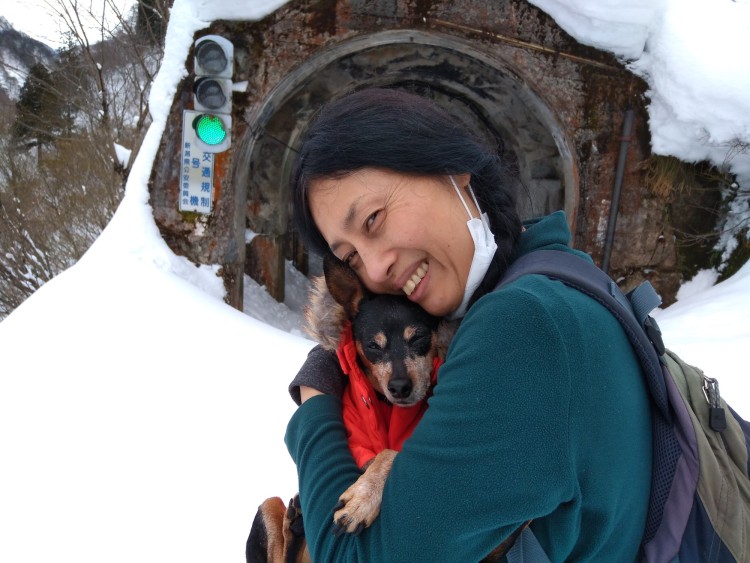 Despite four meters (twelve feet) of snow and the lack of vehicles, a streetlight flashed from red to yellow to green at the tunnel entrance. Photo: Greg Goodmacher

Arched openings on the riverside of the concrete tunnel gave us safe vantage points to look down into a bright, gray lake that reflected trees and snowy peaks. Surprisingly, we discovered orange lichen thriving on the tunnel walls despite the below-zero temperatures.

Sunlight shone into the tunnel from the other end, and I wanted to continue exploring. There were more cliffs and tunnels ahead. But I also worried that my minuscule, skinny dog would suffer from the cold, so we decided to return.

When we hike with our dog, one of us stays behind to keep an eye on her condition. My wife reported that our dog appeared cold, so we wrapped a blanket around her and ensured she was sitting on her hot water bottle. We also did not stop to gaze at the views or take photographs, so we were back in the car before sunset.

Read More: Snowshoeing In Your Own Backyard: Options Close To Home 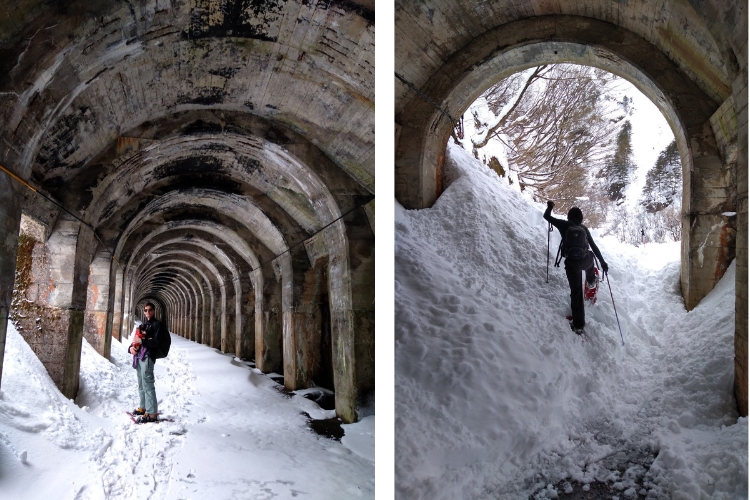 That incredible and impulsive trip was near the end of last year’s snowshoe season. In the future, I will remember to revisit other nearby valleys, rivers, cliffs, and dams that are beautiful in spring, summer, and fall. Winter snows are sure to add a special seasoning.

Yesterday, I spotted the first white-capped peak near my home. The weather forecast is for heavier-than-usual snowfall this winter, so we look forward to other local discoveries this coming snowshoe season.

Where is your favorite spot for local snowshoeing? Have you been surprised by what you found? Please share your experiences with us in the comments below.

Read Next: 10 Ways To Get Outside and Explore Your Local Backyard This Winter