Each year, Snowshoe Magazine presents the Cindy Brochman award to an individual that embodies snowshoeing through their love and advocacy for the sport, fitness, and healthy living. This award serves as a remembrance of Cindy Brochman, the first recipient of the award, who sadly passed away in 2009. In 2022, we, in collaboration and sponsorship with Performance Medicine® are honored to present the award to a very deserving snowshoe racer, community organizer, and advocate – Jackie Hering.

If you’re familiar with the snowshoe racing community, you may be well familiar with Jackie and her many accomplishments. Not only has Jackie recently stepped in as the new director for the United States Snowshoe Association, but as an avid racer and professional athlete, founded the Snowshoe Scurry Racing Series (along with two other series throughout the year), which takes place near her home in Wisconsin.

As Jeff Kildahl, President and Creator of Performance Medicine®  shared, “Jackie Hering epitomizes the significance of this award. It was abundantly clear during our initial correspondence that her boundless energy and unrelenting visionary spirit mirrored Cindy Brochman’s zest for life. Hering, a top-tier professional triathlete, masterfully combines girl-next-door charm with the incisive precision of a surgeon to boldly catalyze the future of our beloved sport”.

Here are just a few of the many reasons why we are honored to present the 2022 Cindy Brochman Person of the Year award to Jackie Hering. 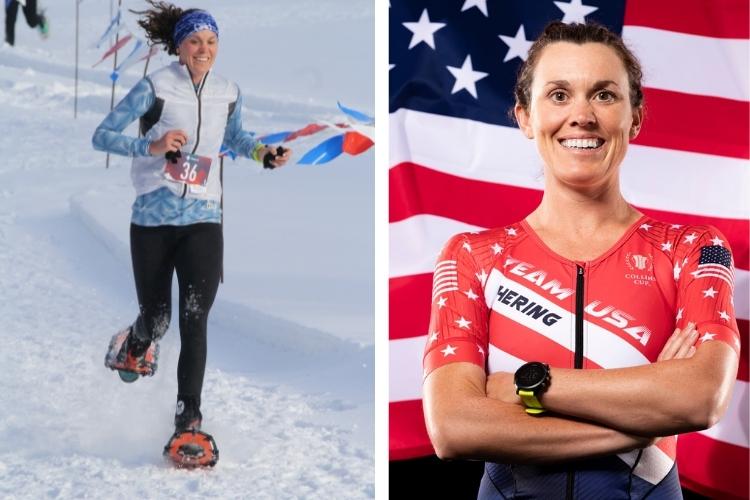 Jackie has an impressive athletic background! R: She’s cruising to a win at the 2022 Snowshoe National Championships. L: Jackie as a member of Team USA Photos: Jackie Hering

Jackie has traveled across the U.S and around the world to compete in events. Some of her travels have taken her to races such as the Half Ironman World Championships in South Africa, the 70.3 Ironman in Campeche, Mexico, and of course, many marathons and half-marathons across her home state of Wisconsin.

In many of her races, Jackie consistently wins or places in the top 3. Most recently, in May 2022, she won the Ironman 70.3 North American Championships in Chattanooga, TN. Moreover, she has several middle-distance wins and one full Ironman win in Wisconsin in 2013.

Currently, Jackie is ranked 11th in the world in the Professional Triathletes Organization long-distance rankings! You can view all of Jackie’s professional race finishes (there are 70+) on her website, keep track of her athletic accomplishments through Strava, or say hello via Instagram.

In addition to her athleticism as an award distinction, her passion for the snowshoe racing community is strong. Jackie, founded and currently directs the Snowshoe Scurry Racing Series.  In our conversations, Jackie emphasized how much she loves snowshoeing. Thus, she wants to get people out on the trails during the winter. With a career in event planning, the Snowshoe Scurry is the perfect combination of passions to achieve this goal.

Now, for 9 years, the series has included at least 3 snowshoe racing events, ranging from 5ks to half-marathons. With the onset of COVID, the series was on pause for 2020 and 2021. However, races returned in early 2022 with three free self-timed events. Since 2017, Jackie has even expanded the series to include fat bike racing events.

Furthermore, these events give back through donations to the local community including Friends of Donald Park and Racers Against Childhood Cancer.

The Snowshoe Scurry winter series is one of three that Jackie has created through her company, Rooster Events. When the snow is not on the ground, you can catch the Cottontail Classic in the spring and the Big Swell Swim racing series in the summer. 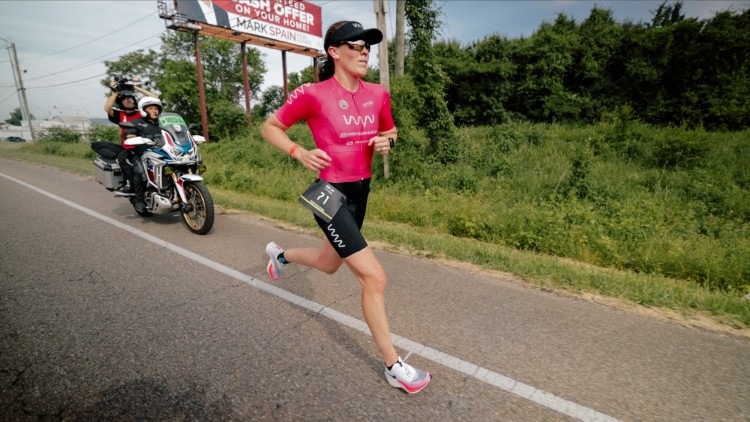 Jackie not only regularly races but is the race director of multiple series throughout the year. Photo: Jackie Hering

The Future of the United States Snowshoe Association

In 2018, as another award distinction, Jackie became more involved with the United States Snowshoe Association (USSSA), the national governing body for snowshoe racing.  Her drive to support the athletic community and snowshoers skyrocketed with the onset of COVID in 2020. As we learned, exercise engagement served as one of the primary resources used to get through the pandemic. But unfortunately many races were canceled due to COVID restraints, causing a flux in the racing industry.

With the 2021 U.S. Snowshoe Nationals canceled and the future uncertain, Jackie stepped up to the task. “Jackie wanted to make sure the snowshoe nationals kept going [for 2022]. She was also very willing to put in the work and corral others to the new USSSA cause”, shared Richard Bolt, 2017 Person of the Year recipient and current board member of the American Trail Running Association.

In 2022, she officially took over as director of the USSSA for Mark Elmore, who served in that role for the last 20 years and is also a former recipient of this award. Elmore shared, “The USSSA was very pleased when Jackie agreed to assume guidance of our US National Snowshoe Championships Program. The 2022 championships offered some innovative new wrinkles, like splitting the High School/Collegiate events out from the Senior events, expanding the US National Team, etc.”

Even with these changes, Jackie led a successful 2022 Snowshoe Nationals event in March with over 100 participants! As Bolt mentioned, “Without Jackie, there would not have been a 2022 snowshoe national championship”.  She was the perfect director for this event. Bolt also commented on how friendly and kind Jackie was throughout the event. As he said, she truly is a model participant having previously raced in the event and being such an accomplished triathlete.

Moving forward, Jackie’s goal is to increase awareness of snowshoeing and snowshoe racing. As she mentioned, not many people have learned to embrace winter properly. Moreover, Jackie said she used to be there too. Now, she wants to show others the joys of winter through snowshoeing. This passion shines through to others involved in the sport. Kildahl mentioned how “[Jackie’s] passion and commitment to advancing the limitless potential of snowshoeing bolsters her role as executive director of the United States Snowshoe Association”.

As the new director, Jackie wants to provide more support for local snowshoe events through USSSA. Support for events through the governing body can truly invest in the grassroots of the sport. Next year, expect one national event to bring together snowshoe lovers of all ages and abilities!

Jackie truly exemplifies the characteristics of this award as a snowshoe racer and advocate. Her dedication to the sport through race directing, management of the USSSA, and extremely impressive athletic career are all models of what this award stands for in the community. Moreover, Jackie shows kindness and caring for those around her, whether giving back or a friendly smile on the field.

As Elmore mentioned, and the rest of the snowshoe community can certainly agree, we’re excited about what lies ahead for our sport with Jackie at the helm!

Please feel free to share any other impactful memories or experiences with us regarding Jackie. We’d love to hear about her snowshoe racing and this award in the comments below.