Sadly, Snowshoe Magazine has learned that Cindy Brochman, 44, has passed away after a hard-fought battle with liver cancer.

“Cindy represented everything to the sport of snowshoe racing.  She was exceptionally giving of her time and constantly displayed a winning attitude no matter the situation,” said Ryan Alford, publisher of Snowshoe Magazine.  “The worldwide snowshoeing community will miss her smile, competitive spirit and grace.”

Cindy was the first recipient of the Snowshoe Magazine Person of the Year Award, which she received during the medals ceremony of the 2007 United States Snowshoe Association (USSSA) National Championships.  (See the photo below of Cindy officially accepting the award, which was taken this past spring.)

As the USSSA’s Committee Chairperson, Cindy was responsible for organizing the championship races in 2007.  Two weeks before the races were scheduled to start near the Twin Cities, the ground was still bare. 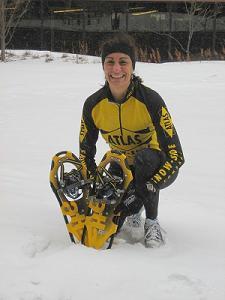 “Bringing the Nationals to the Twin Cities, Cindy showed wonderful vision and she was a terrific leader.  She did such a great job pulling it all together,” said Phillip Smith, Snowshoe Magazine’s senior editor.  “I believe it was Cindy’s tremendous willpower that forced the snow to come that year.  Right before the Nationals took place, there were two blizzards that hit the Cities.  We had plenty of snow to race on – thanks to Cindy, of course.”

Cindy was also known for her efforts as a member of the Atlas Snow-Shoe Racing Team (http://atlassnowshoe.com/team) and a member of the USSSA National Team for two years (2005 and 2006).  In addition, her experience as a snowshoe racer took her to Italy to compete in La Ciaspolada – the world’s largest snowshoe race.  Read more about Cindy’s experience: click here.

Snowshoe Magazine and its staff extend their deepest sympathies to Cindy’s friends and family. 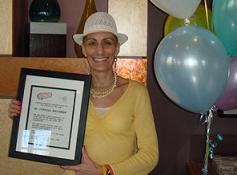