One of the most productive athletes ever in the outdoor snow, trail, and mountain scene–Richard Bolt–wins the 2017 Cindy Brochman Memorial Snowshoe Magazine Person of the Year honor. 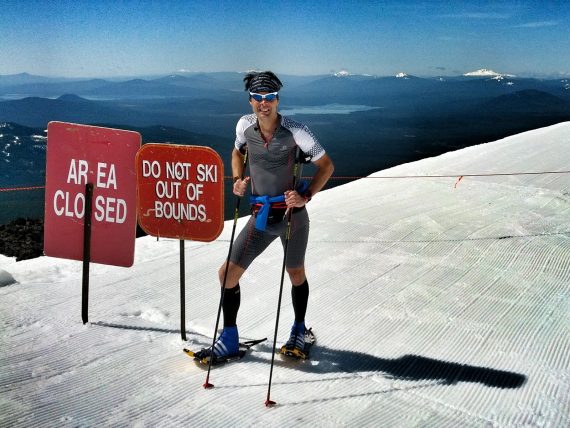 His resumé reads like someone whose only rest occurs when just taking a break to enjoy a view from the trail. Otherwise, it’s go, go, go. Like a time crystal, Richard never seems to stop. Perpetual motion frames him as a perfect recipient of one of outdoors sport’s prestigious awards now with the 11th honoree starting its second decade.

Presented annually to a person reflecting the passion and drive for snowshoeing, fitness, and healthy living, the honor remembers the life of Cindy Brochman who became the first recipient of this award in 2007. Naming the award in her honor seemed so natural. See her history HERE. 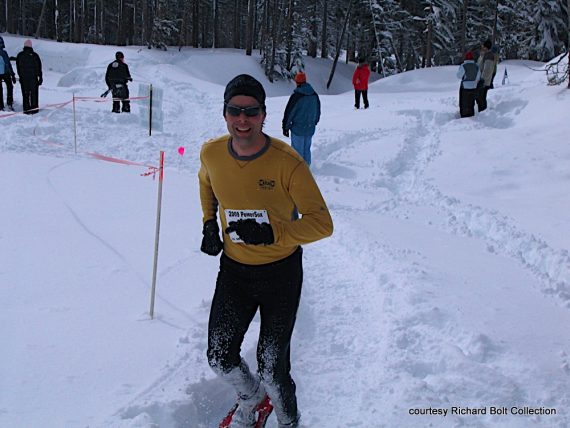 Racing to the Mt. Hood finish at the 2009 PowerSox USSSA National Championships with some of the deepest snow conditions ever for this race. (photo Eric Willis)

Finding Richard at any moment requires super energy. With a past leading from Rochester, NY, Nashua and Manchester, NH, then west to Portland, OR, and now Mountain View, CA, Bolt doesn’t just look at the mountains. He lionizes them. 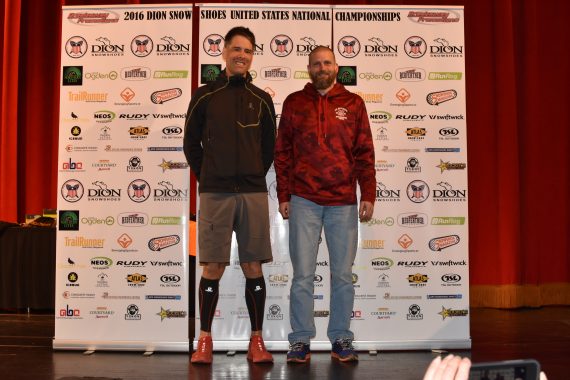 In the midst of the technology oligopoly where many famous companies found their beginnings, his search engine finds trails, mountains, and activity to support and encourage lifestyles where “active” seems way-too-understated. 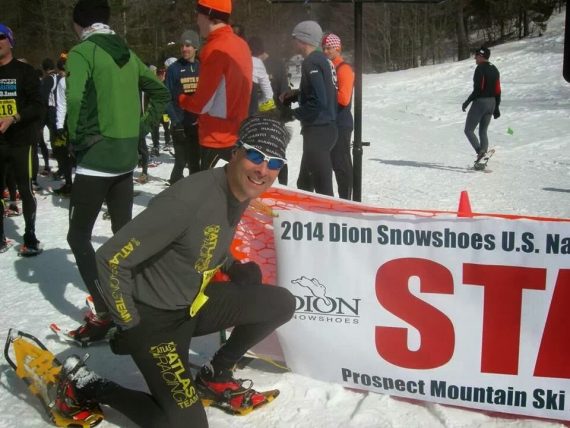 In 1988, he earned New York’s High School Cross Country Running State Championship along with the U.S. Junior Men’s Cross Country Skiing Championship. He had to rank as a prize prom date after those first credentials.

Back to the time at St. Lawrence University, Canton, NY, he earned NCAA All-American Cross Country Skiing honors, twice winning NCAA’s skiing-only conference Eastern Intercollegiate Ski Association Championship. He made time to study geography and environmental issues graduating with the 1992 Senior Scholar-Athlete Award, which annually honors one male and one female. Joe Keniston, Director of Laurentian Engagement, explained “(The recognition) takes into account academic and athletic accomplishments during their careers at St. Lawrence. Richard was a model student-athlete at St. Lawrence, as he excelled both in and out of the classroom.  To no surprise, his athletic prowess remains strong at this stage in his life, and all of us on campus are proud of him and thank him for representing the Scarlet and Brown with class and drive.”

Embodying a creative knack, he led the current craze of electronic music by a quarter-century teaching composition for two years post-graduation. 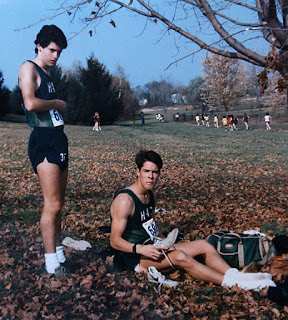 Richard competed at the professional level of cross-country skiing in the 1990s. He raced that sport’s U.S. Olympic trials for 1992, 1994 and 1998 enduring “the high pressure I put on myself trying to make Olympic teams.” He was a member of the 1997 World Duathlon Team where a running leg and a cycling leg end with another running distance.

Next came passions that drive him yet today: in 1999 he made the U.S. World Mountain Trophy Running Team where he finished third along with another bronze result at the Challenge Stellina, Italy, leading to a constant presence in that sport. Completing all three of the 2002 selection races, placing sixth at the Wolverine Mountain Run, ninth at Mt Washington, and eleventh at the Vail Hill Climb, confirmed his enthusiasm for the sport. He wrote “I was looking for a new racing challenge that didn’t require as much gear, travel or snow (as skiing). Most runners hate hills, but these races were all hills complete with a rewarding view at the finish.”

His second National Team came in Vermont’s 2006 race (fourth overall). A Masters National Team membership came later at 2016’s competition in Ogden, UT. More than half of the 17 USSSA Nationals thus far found him racing or directing the events. 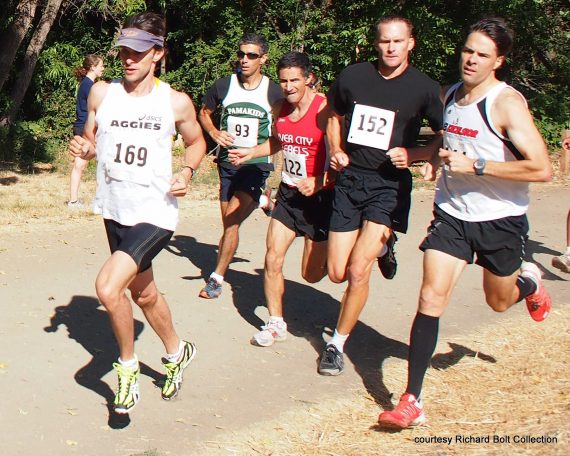 He filled the role of co-race director at USSSA’s 2013 Bend, OR, races along with the 2017 edition also in Bend, the first time the sport has returned to the same address. If you have ever competed on one of his course layouts, you may think Richard a masochistic race director delighting in the misery of others. Instead, he just likes to put forth challenges for athletes, himself in the lead pack. He added a steep climb in the most recent nationals that elicited reviews like medalist Kris Borchardt: “Mount Bachelor’s National Championship 10 km race was the ‘anti-Kris’ course: a very hilly event, soft powder at 6500 ft that included 1300 ft of climbing a slanted incline so steep… ,” so steep entrants got to enjoy the loop twice.

Mark Elmore, Sports Director of the USSSA, said “Richard has been a long time USSSA member, National level competitor, three-time US National Snowshoe Team member and advocate for the sport. His history of outstanding finishes at the annual US National Snowshoe Championships reflect his dedication to the sport and his talent.” 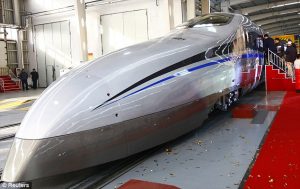 Richard’s interest in high-speed trains: A 300-mph UK train might be fast enough for him. (photo Reuters)

Richard added cycling and mountain running to his bag-of-tricks. Involved since 2003, he notes “As team leader for the US Mountain Running Team I work with other volunteer staff members to determine selection races and lead the team at the World Mountain Running Championships each September. The team is sanctioned by USA Track & Field (USATF) and funded through the ATRA.” Since 2013 he fills the role of Director of Online Marketing for the American Trail Running Association (ATRA). 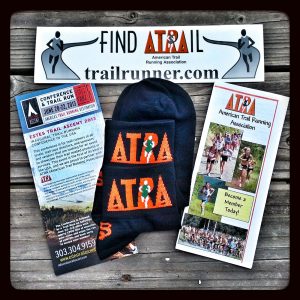 Along with Mountain/Ultra/Trail (MUT) Council member Nancy Hobbs—also Executive Director of the ATRA—Bolt and Elmore explore a possible merger of the USSSA with the MUT as the governing body. Elmore said, “Richard has long been involved in the mountain and trail running community and one of the leaders in the USATF’s MUT Council. After he co-directed the 2013 US National Snowshoe Championships in Bend, I asked him what he thought of the idea of merging the USSSA’s National Championship Program into the MUT.

I saw this as a natural fit, a sensible evolution of the USSSA and the MUT, as the sport of snowshoeing is largely mountain and trail running but during the winter season. He agreed. Together with Nancy Hobbs, also an avid snowshoer, we began discussions to see how this might take place. These proceedings continue.” 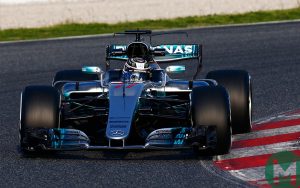 On Richard receiving this award, Adam Chase wrote: “Richard is a very deserving recipient. With his background in Nordic skiing and running, he made an easy transition to snowshoes and has been a successful and a wonderful ambassador for Atlas Snow-Shoe Company. I’ve been lucky enough to work with Richard through the American Trail Running Association, Atlas Snow-Shoe Company, and Salomon and to witness his devotion, enthusiasm, work ethic and sense of responsibility to doing what he does well and thoroughly. He also has a delightful sense of humor that lightens the mood.” 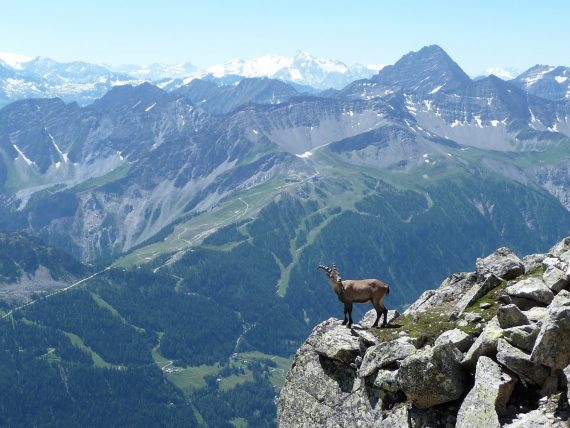 On the Alps’ Mont Blanc, this mountain goat seems to ask, “Where’s Richard?”

Nancy Hobbs said, “Richard is a fantastic choice as the 2017 Cindy Brochman Snowshoe Magazine Person of the Year. He is tireless in his commitment and support of all things trail, mountain, and snowshoe running. His impact on the sport is evidenced through his dedication as a team leader for many USA national squads. Work as a course and race director, his ambassadorship for brands like Atlas-Snowshoe, Salomon, Suunto, and his contributions as a committee member on USATF’s Mountain Ultra Trail Council, and the International Trail Running Association. Furthermore, Richard’s work as the American Trail Running Association’s Director of Online Marketing has been instrumental in elevating the organization’s profile.” 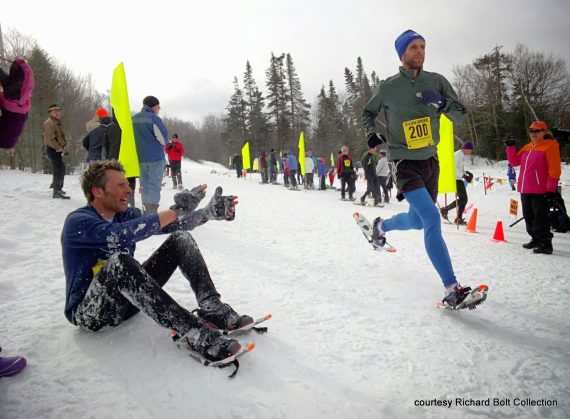 For an article dated January 2015 that Richard wrote for Google’s Glass Journal comes a glimpse of his active life. “Today I’m still an avid trail runner—traveling fast and light—exploring the world beyond paved roads while staying connected and sharing my experiences from the trail. In the past 12 months, Glass has been my exploration companion while trail running across the United States and around the globe. I’ve run mountain trails in eight US states, Italy, Switzerland, Austria, Germany, Poland, the Czech Republic, Slovakia, Canada, Mexico and captured them all through Glass. While I often run alone or in small groups, Glass keeps me connected with my once elusive and now larger community of trail runners. Now they see what I see and trace my route from afar.”