Stepping down from the plane, we fought through the heavy snow swirling across the tarmac and briskly walked into the arrival lounge of Tromsø Airport. It was midnight, and after sitting for two hours in a warm jet, I felt cold as melting flakes dripped down my face.

I had finally arrived in the arctic……entering a dream lodged in my thoughts for decades! Over the years, I had become a passionate fan of Norway. We had many visits to the classic cross-country ski trails of the Nordmarka area above Oslo and the extensive Sjusjøen Plateau near Lillihammer. 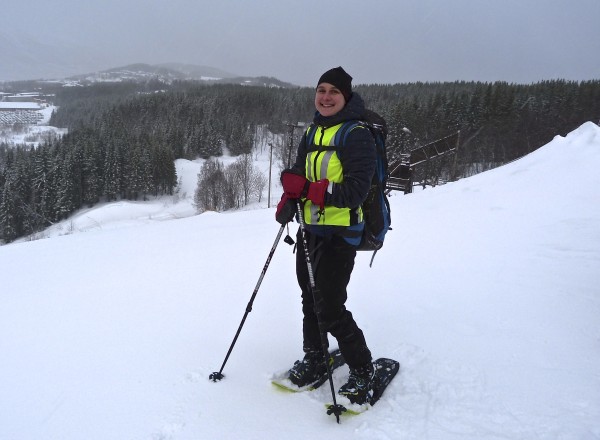 Traveling To The Far North

Norway’s physical nature and its entire character had become a fascination. So it seemed like a logical move to go to the far north of Norway. We longed to find out more about this narrow Scandinavian land. Norway runs 1752 kilometres (1089 miles) long and just 430 kilometres (267 miles) wide, located on the upper edge of Europe. This trip would be the first northern visit for both my wife, Jackie, and myself. It was our opportunity to taste the arctic!

But why specifically go to Tromsø, you may ask? Well, Tromso is a convenient airport to fly to with its regular daily flights from Oslo. But, it just seemed such an interesting place to visit. 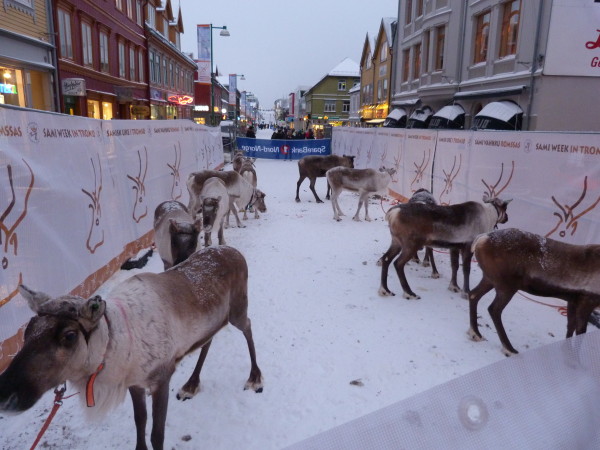 Reindeer tethered for racing on the main street of Tromsø, part of the Sami Festival held each year.

Tromsø, built on the island of Tromsøya, lies 350 kilometres (217 miles) within the arctic circle. It has been a critical settlement for both Norwegians and the Sami (Laplanders) for hundreds of years. Historically, the area has played an essential part in arctic travel. Maritime enterprises, hunting, and exploration have all made use of the natural harbour and facilities of Tromsø. It became a gateway to the arctic world.

But, above all, there are many opportunities for several arctic outdoor winter activities in Tromso, including snowshoeing, dog sledding, and the Northern Lights. Also, there’s an added advantage of having numerous specialists at hand to assist and guide people if required. We just had to go…..and here we were! 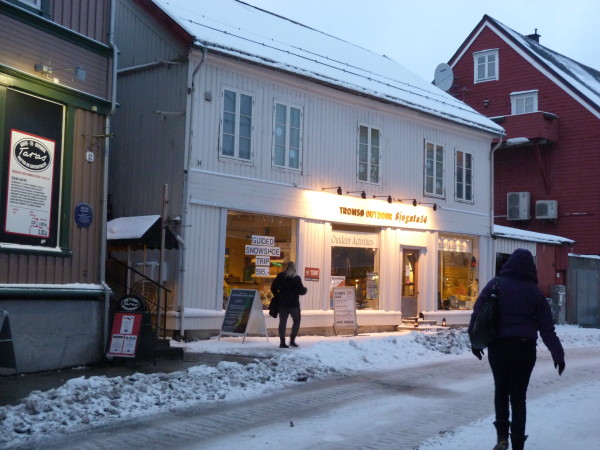 Out Onto The Snow- Snowshoeing In Tromso

The next morning I was standing in Tromsø Outdoor to rent some equipment, saving on the transportation of skis and snowshoes from the UK. Magne Aarbø, the owner of the shop, provided me with a Tromsøya Island map. He pointed me in the direction of the cross-country ski trails that run within ten kilometres (around 6 miles) across the length of the island.

It wasn’t long before I clipped on the skis and was off. Within half an hour, heavy snow was falling as I skied to Nordspissen at the northern end of Tromsøya. As I turned around to head back, I faced the full force of a ferocious wind with snow rapidly filling up my tracks. It was enjoyably wild!

Over the next few days, we made other short daily winter activities and explorations onto the island’s ski trails. There was a mixture of weather conditions ranging from further blizzards to more settled weather. Additionally, there was consolidated, packed snow to deep fresh powder snow. The weather was indeed changeable, challenging, but fun. 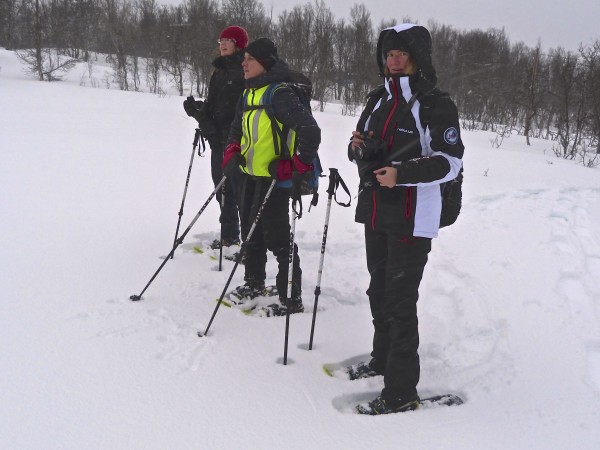 One day during our stay, I joined Kinga Legzczak, a guide from Tromsø Outdoor, on a snowshoe tour of Tromsøya Island. Two visitors from Berlin and myself enjoyed snowshoeing amongst the birch trees, and over undulating terrain in the deep snow of the central part of Tromsøya.

We trekked along, occasionally crisscrossing cross-country tracks, spotting well-camouflaged ptarmigan hidden beneath the trees. Meanwhile, we gazed at the most attractive high country surrounding us in every direction. It soon became apparent that the snowshoeing potential was endless in the vast upland arctic landscape of Tromsoya! Alternatively, my wife’s reindeer sledding was postponed that day due to high winds and menacing snows on a nearby island!

My guide, Kinga, explained that she led snowshoeing trips on Tromsøya and Kvaløya islands. She added that Tromso Outdoor would advise people about the conditions and practicalities of snowshoeing in other areas and can provide guiding facilities to more distant and remote locations. Kinga pointed out that it was always important for visitors to talk to locals before beginning any excursion. That way, they can obtain the most up to date information regarding the suitability of any proposed trips.

The State of Norwegian Snowshoeing 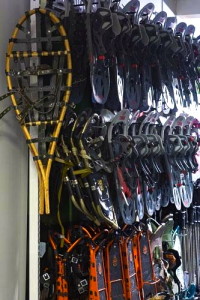 Snowshoeing is rising in popularity in Norway. Snowshoes inside Tromsø Outdoor.

After our adventure, I chatted with Magne Aarbø from Tromso Outdoor. I looked at the mass of snowshoes hung on the wall of his shop. He told me he began his business on nearby Kvaløya in 2006 but needed more room to expand. Thus, he moved to the downtown Tromsø premisses in 2010.

His shop now stocked the largest number of snowshoes in all of Scandinavia. He said there had been a great deal of growth in snowshoeing throughout Norway and in other Nordic countries. The increase was apparent from what I had seen too.

Tromsø and the local region had so much to offer any devotees of snowshoeing. I wish I were staying longer to sample more snowshoeing treats.

In addition to snowshoeing, Tromso, Norway offers a plethora of other winter activities. Two of which that we had the opportunity to do on our trip was the Northern Lights and dog sledding.

The evening after snowshoeing, my wife Jackie, and I realised another strand of our arctic dream. We stood by the coastline on Sommarøy Island, looking upwards and all around us at the ‘aurora borealis’ or northern lights. The incredible view was part of our tour, ‘Northern Lights Chase.’ The chase consisted of an hour and a half drive to a location that would hopefully allow for a suitable viewing, based on local professional aurora watcher’s predictions.

We were not disappointed. We marveled at over an hour’s worth of swaying waves and transparent curtains of light green light in front of a multitude of stars in the clear night. The sky subtly lit up as this polar kaleidoscope gradually changed its colourful tones and hues. It was a unique geomagnetically fuelled spectacle, and we stood transfixed! 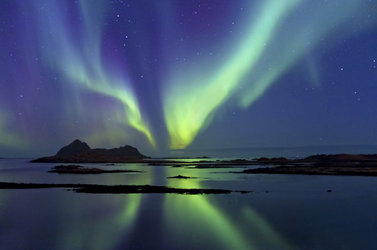 The following afternoon, we found ourselves on Kvoløya Island and were dog sledding with one of Tove Sørensen’s husky teams. Tove has lived in the area for years and has 300 Alaskan huskies. Here at Tromso Villmarkssenter, visitors can experience the joys of sledding and see where Tove trains her selected elite dogs for such races as the Finmarksløpet and the Iditarod.

The weather was truly wild with a piercing wind and snow. However, we thoroughly enjoyed our five-kilometre slide as well as a tour of Tove’s kennels. 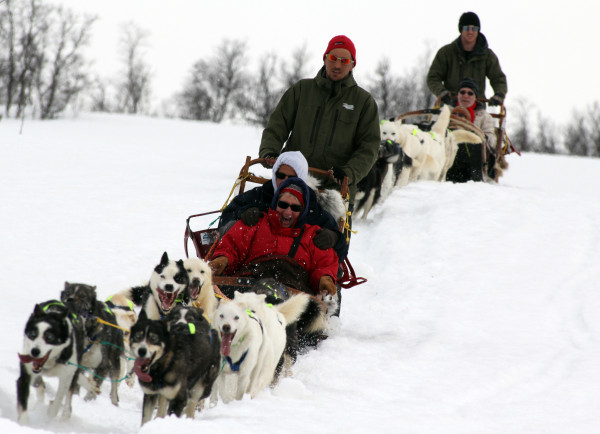 The following day we visited the Polar Museum in Tromsø, where we viewed a host of displays illustrating early life in the far north. I was fascinated by the Roald Amundson antarctic room, along with a particular hero of mine, Fridtjof Nansen. Nansen’s exhibition described his arctic exploits, including his attempt to travel to the North Pole with his compatriot, Hjalmar Johansen. It explained how they were forced to over-winter in a hovel they had made on Franz Josef Land,  surviving on only polar bear and walrus!

After our arctic adventures,  we waited for over an hour for the runway at Tromsø to be cleared of snow from the latest blizzard. You could sense an arctic tug wanting us to stay! ‘Oh dear, we’ll just have to come here again,’ I mused to Jackie. Our trip to northern Norway had not been a disappointment; we had tasted its delights and wanted more. Time to make plans for our return!

Tromso Outdoor: For general snowshoeing information in the Tromsø area, guided trips, and hire of snowshoes, skis, and other equipment.

Some of the links in this article may contain affiliate links. When a purchase is made using these links, part of the proceeds go to Snowshoe Mag. These proceeds help us pay for site maintenance and article contributions. Additionally, as an Amazon Associate, we earn from qualifying purchases. Please see our disclosure for more details.

I am a life-long mountain fanatic! I like wild and mountainous places and have enjoyed a range of experiences in the Swiss, French and Austrian Alps, East Africa, Transylvania, Norway, Russia and in the British Isles. Being a winter creature, I love to cross-country ski, walk and snow shoe. I have recently retired from teaching so I'm now able to spend even more time enjoying outdoor activities. In addition, I also have more time to write about them! Retirement is good.