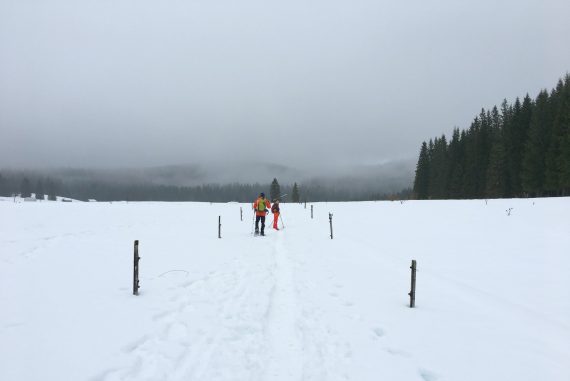 I am sitting in a hut in the Julian Alps in Slovenia drinking a Laško beer. My ten-year-old son, Anders, and I snowshoed up here with our guide Matevž from Altitude Activities. A road biking race in Dubai is playing on the flat screen above our heads, while the old couple that runs the hut speaks quietly in Slovene at another table. It’s one of many times when the Talking Heads Once in a Lifetime pops into my head. How did I get here?

A month ago, I didn’t even know the Alps ran all the way to Slovenia. The Julian Alps are limestone jaw-droppers that scrape the sky. At least that’s what I’ve seen in photos. It was misty and rainy during our four days in these mountains. The Julian Alps are named after Julius Caesar who founded the town of Cividale del Friuli at the foot of the mountains.

I didn’t know much about Slovenia, either, until my husband and I decided to spend a month in its capital, Ljubljana, as part of our year of travel with our two boys. Like most people who were cognizant in the 1990s, I knew Slovenia was a part of the former Yugoslavia and the only country to secede with just a ten-day war. Slovenia, as a country, has only existed since 1991, but as a culture, its history is long, rich, and proud.

Anders, Matevž, and I are in Triglav National Park, halfway between picturesque Lake Bled and lovely Lake Bohinj. Matevž picked us up this morning at our hotel and drove us to the Pokljuka Plateau to start our hike. 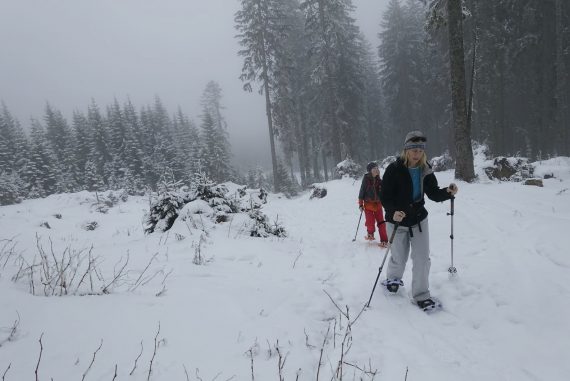 The centerpiece of Triglav National Park is the eponymous peak. The 2864-meter peak has been an important part of Slovene culture for more than a millennium and appears on the country’s flag. The early Slavs believed Triglav (Three Heads) to be the home of a three-headed deity who ruled the sky, the earth, and the underworld. It’s said you are not a real Slovene until you climb the peak.

After donning the snowshoes Matevž brought for us, the three of us started out along a flat, snow-covered road. As we walked, Matevž told us all about the trees, an invasive pine beetle, and the national park. If it hadn’t been so misty, we would have been gazing at rugged snow-capped mountains. I would have loved the view, but the mist created a fairytale aura ideal for this part of the world. 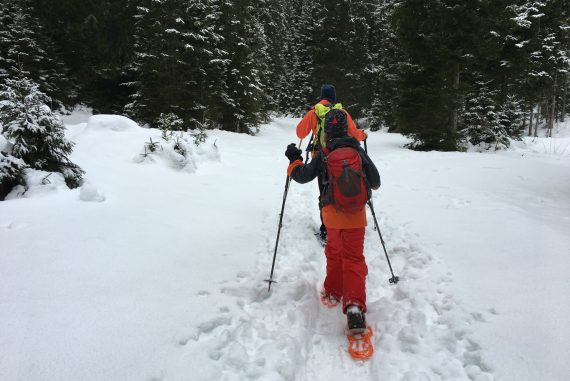 Leaving the road, we crossed Planina Zajavornik, a pasture where Slovenes graze cows in the summer. Wooden signs nailed to a tree advertised milk and cheese for sale. Gray, wooden cottages and barns were scattered across the meadow in various states of repair. Some were nice and obviously livable, while others were bending and crumbling to the ground.

Matevž led us onto a narrower trail, and up a hill through a forest of spruce (Picea abies), larch (Larix decidua) and dwarf mountain pine (Pinus mugo) to the Blejska koča na Lipanci hut.

The hut isn’t exactly a hut. It’s a big building with a restaurant on the top floor and bunk rooms downstairs. In summer, the beds are filled with hikers and mountaineers. Winter was a little slower.

We hiked back through the woods, picking up our pace on the way down. Anders and I were glad we got in a snowy adventure before all the white stuff melted away.

Matevž dropped us off at Bled Castle to meet up with my husband, Henry, and eight-year-old Finn. Peaking over the walls of the castle, we could see Lake Bled where we had ice-skated the day before. You can’t do this every winter, but according to the locals we talked to, the lake freezes once every 5-9 years. We were fortunate to be there the last day of safe skating for the year. 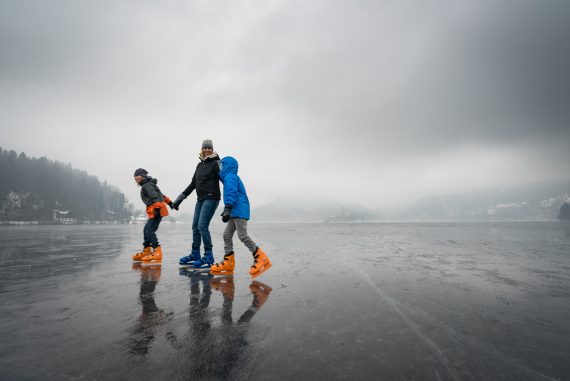 We returned to Hotel Triglav for dinner and a swim in the pool. The hotel was built in 1906 and is filled with antiques and charm, but thoroughly modern in all the ways that matter. The view over Lake Bled and Bled Island, topped with an oft-photographed church, captivated us.

The Bohinj Valley draws winter recreationists from around the country, and more and more, from around the world. Ice skating on both Lake Bled and Lake Bohinj, cross-country and alpine skiing, ice climbing, and of course, snowshoeing, lures lovers of winter sports. It doesn’t hurt that the national park, lakes, and picturesque villages are absolutely gorgeous.

There is a story that tells how Bohinj came to be. God gave out all the land to people when he realized he had forgotten about a small group who were silent and did not insist like the others. Because of their modesty and patience, he felt pity for them. That is why he decided to give them the most beautiful land of all, which he had set aside for himself. It is called Bohinj, because they call God Boh.

Grega Šilc from Hike & Bike said snowshoeing in the Bohinj area is special thanks to “stunning landscape, great views and the fact that there are a lot of difficulty and distance options. A great advantage is also the fact, that all our snowshoe hikes take place in the only national park in Slovenia. The hikes can be really easy or they can be quite long and also hard. Usually the snow conditions for snowshoeing are one of the best in Slovenia.”

The next day we took the bus to Bohinjska Bistrica, a little town in the Bohinj Valley, not far from Lake Bohinj. It was still raining and we saw our opportunity for more snowshoeing melting away.

I had been emailing with Grega about a snowshoeing tour. The plan was to take the cable car up to the local ski area called Vogel. From there we could snowshoe around, avoiding the ski runs, of course. But, Grega told us the area was hard to navigate in bad weather and by the looks of it, it was soaked up there.

We decided to nix anymore snowshoeing on this visit, but we were lucky to find an aquapark right across from Hotel Tripič, where we were staying. The boys slid down the two water slides, spidered up the climbing wall, and splashed in the music cave, before returning to the hotel for a huge dinner.

Despite the rain, we decided to get out the next day and take a short hike to Slap Savica, a 338-foot double waterfall. France Prešeren, Slovenia’s famous and revered poet, wrote, “As in its wrath, its foam flies to the skies!” The waterfall didn’t seem that wrathful to me, in fact it was a delicate stream landing in a turquoise pool. Savica had been frozen just a day or two before, but now the water was rushing over the limestone and the creek was roiling. 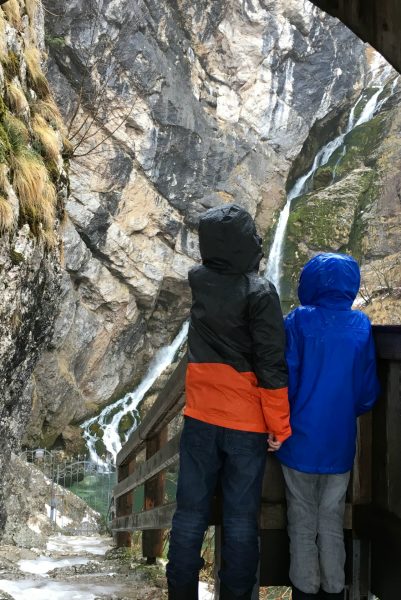 After a 4-kilometer walk through the cold rain to the bus stop, we were all glad to warm up at the hotel. If there is one thing I learned from traveling in Slovenia, it’s that half-board is the way to go. Not only did we have a huge and tasty breakfast, a several-course dinner was included in our stay.

Whether the Bohinj Valley was a gift from a grateful god or the dominion of a three-headed deity, we fell in love with it and look forward to exploring more of its natural wonders. 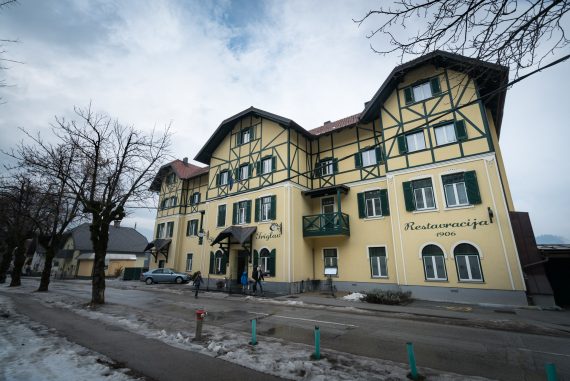 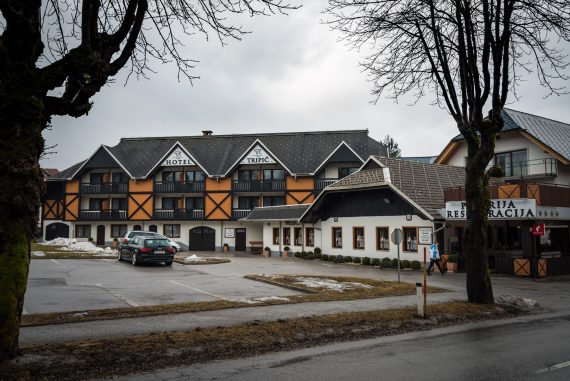