Mt. Bandai, an 1816-meter-high (5958 ft) dormant volcano in Northern Japan, should have looked like a cone of coconut ice cream. Instead, an emaciated cap of whiteness covered Mt. Bandai, and skinny fingers of dirty snow splayed between spindly trees. Empty lift chairs hovered motionless above brown earth and dry grasses. And this was during February, Japan’s coldest month. I released a stream of insults about global warming and climate change while gripping my car’s steering wheel.

My goals on this trip were to explore a vast network of snowshoe trails, visit famous waterfalls, trek across frozen lakes and ponds, chat with ice fishers, and soak in hot springs with vistas of trees draped in thick cloaks of snow. Little of that seemed possible upon arrival. But, that evening, an unexpected two-day storm dropped torrents of snow, like manna from heaven; we could snowshoe to some of Mt. Bandai’s spectacles. The storm saved my winter vacation to Japan’s “lake district.”

In 1888, eruptions and runoff on volcanic Mt. Bandai separated large rivers, creating lakes, ponds, marshes, and swamplands in the hundreds. Urabandai, our destination on this trip, is a highland with wetlands on the northern side of Mt. Bandai. The area offers a range of winter attractions that include Urabandai’s four lakes and more than 200 ponds. 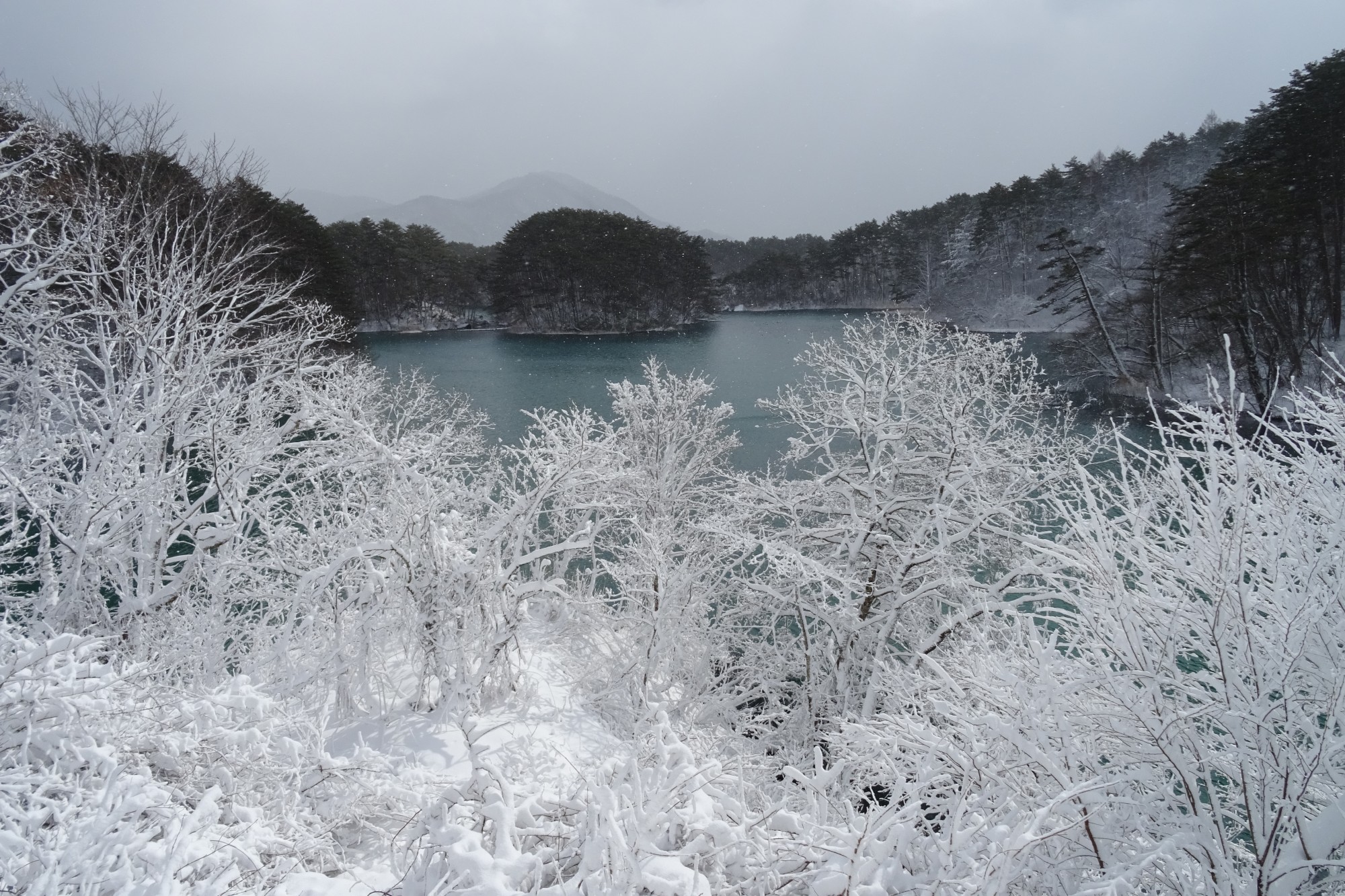 Before my trip, a resident told me the lakes and ponds always freeze and that the Urabandai Ecotourism Association plans a one-day 10 kilometer (6.2 miles) snowshoe trek across Lake Hibara at the end of February. But upon arrival, I learned that the event was canceled because the ice on the lakes and ponds was not solid enough to support walkers.

Similarly, Lake Hibarako, which is a popular spot for catching Japanese pond smelt, was devoid of ice fishers. Some of the frozen waterfalls were also not frozen.

So, instead of walking on Lake Hiraba, we luxuriated in hot spring facilities overlooking the lake. The baths at Urabandai Lake Resort were dreamlike. The naturally heated reddish thermal water was thick with iron and other minerals. Non-staying guests pay about USD 10.00 to experience a variety of gorgeous indoor and outdoor baths.

Rustic rock-lined baths sit on a cliff. Pine, cedar, and other trees grow between the bath and the lake below. We relaxed as a rain drizzle cooled our heads while hot water heated our bodies. As we departed, the drizzle turned into a massive deluge of cold rain so hard that my window wipers could barely keep the road visible. I felt as if my snowshoeing plans were disappearing like snow sculptures pummeled by heavy rain. However, to my great delight, I woke up to a snowstorm and powder everywhere. 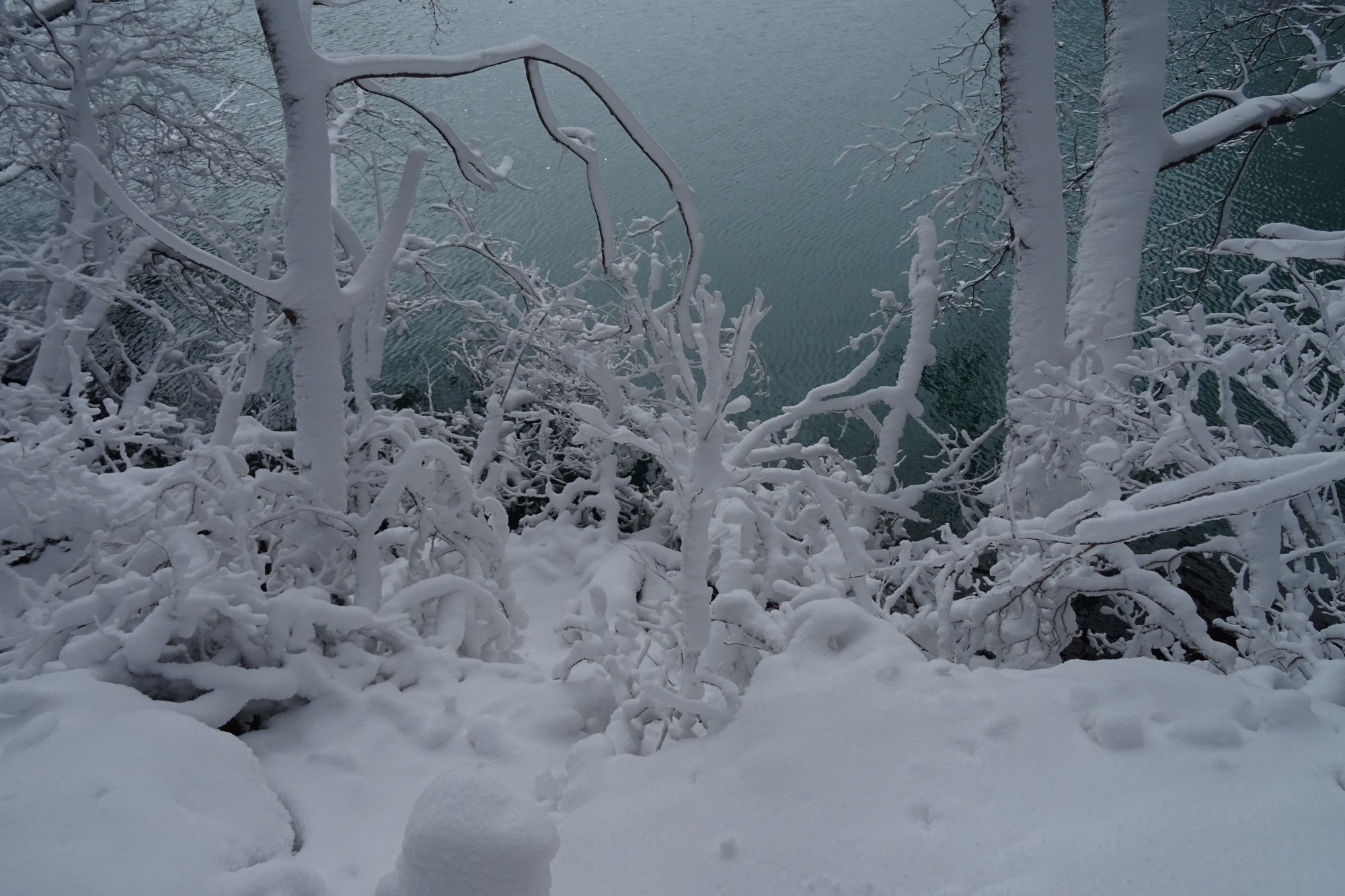 There was so much snow that a bus got stuck on the freshly snow-covered, narrow, bumpy road to Urabandai Ski Resort. We could not visit Urabandai’s famous Yellow Waterfall that day, which was our initial goal. So, after waiting in a traffic jam for half an hour, we looked at a map and made a U-turn.

Luckily, the map introduced us to a breathtaking snowshoe route around unusually colored shimmering ponds. We put on our snowshoes at the Urabandai Visitor Center and began to trek the Five Colored Ponds trail.

Despite the freshly falling snow, the path had been packed by many hikers before us. Arrow-shaped signs pointed out the trail, and plaques along the route named the ponds and marshes.

Each pond was differently hued because of differences in mineral content, pH levels, moss, and other plant life. My friends and I had never seen such extraordinary ponds. The beautiful colors were astounding. 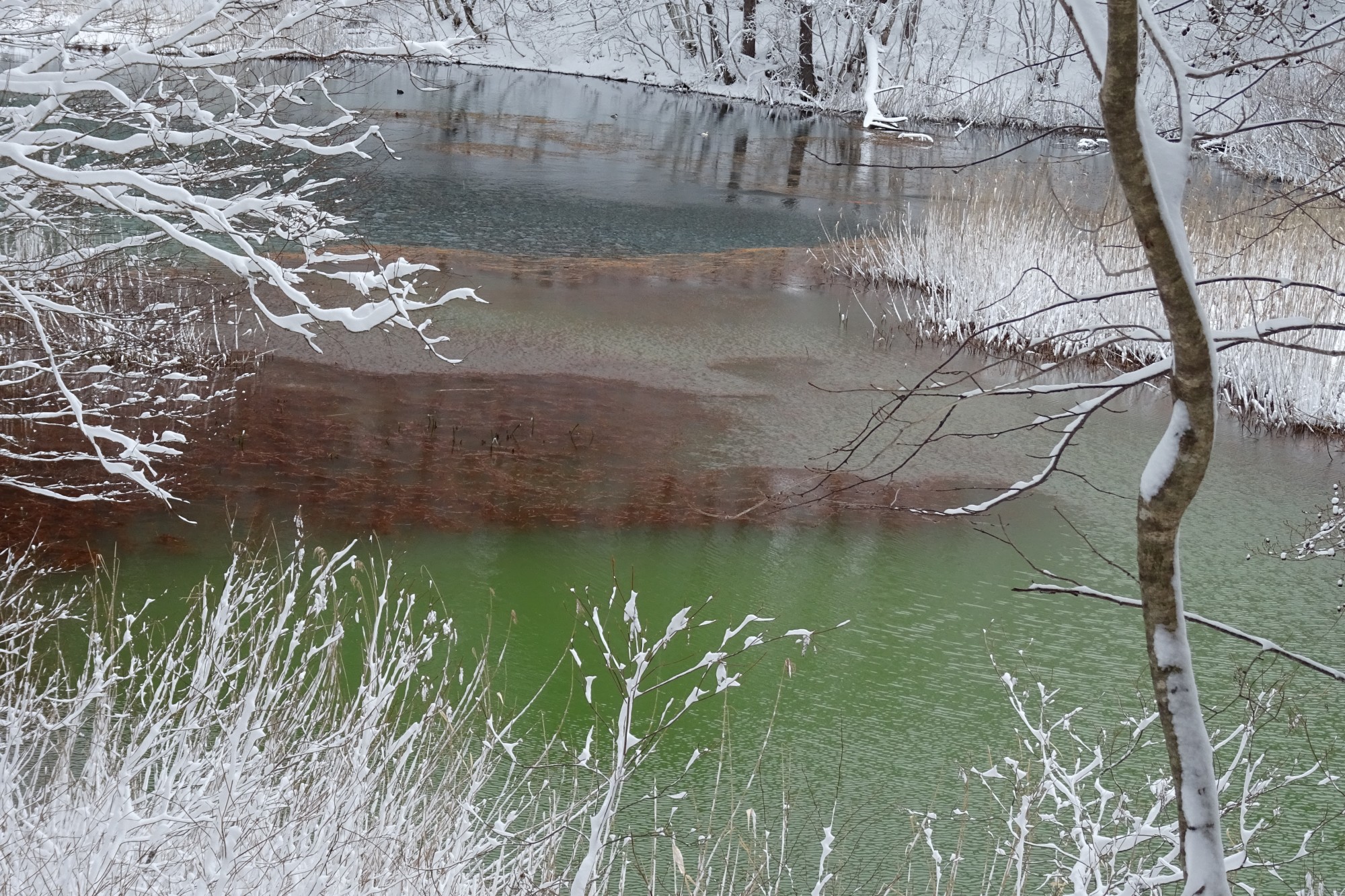 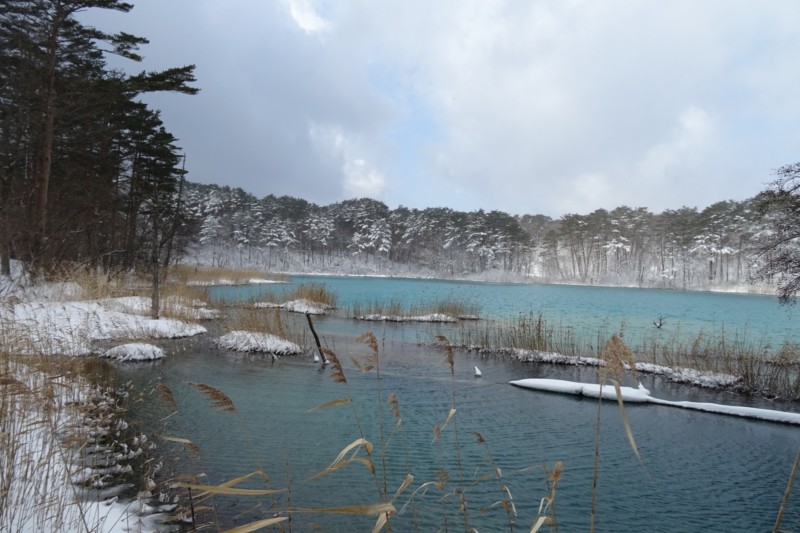 Beautiful Ponds Along The Trail

The water at the edge of Bishamon Pond was crystal clear, but looking across the surface, we observed that changes in the light and depth brought out a deep purplish-blue. The pond water and soil reportedly contain silicate and aluminum minerals.

Akanuma was the second pond. The water is alkaline, and the water is reddish-green. The fresh white snow and colored waters produced a fantastic contrast. The sun suddenly came out, and there was a lull in the storm. We stopped on a hillock above the pond to relish the scenery.

Multicolored Aonuma Pond was next. Hues of green, blue, and turquoise spread across the pond. Ducks in the pond responded to our presence with quacking laughs and drifted away over the shimmering surface.

Despite the name Five Colored Ponds Trail, there were twelve ponds and marshes. During the storm, reeds and trees encrusted with snow and ice looked like fairy-tale beings. The length of this rolling trail is approximately 4 kilometers (2.5 miles) one way. The difficulty level depends on weather conditions. We experienced light snow, medium winds, and periods of sunlight on the way out. On the return, we had to fight against forceful winds and heavy snowfall. All in all, though, the beauty and uniqueness of the area exhilarated us. 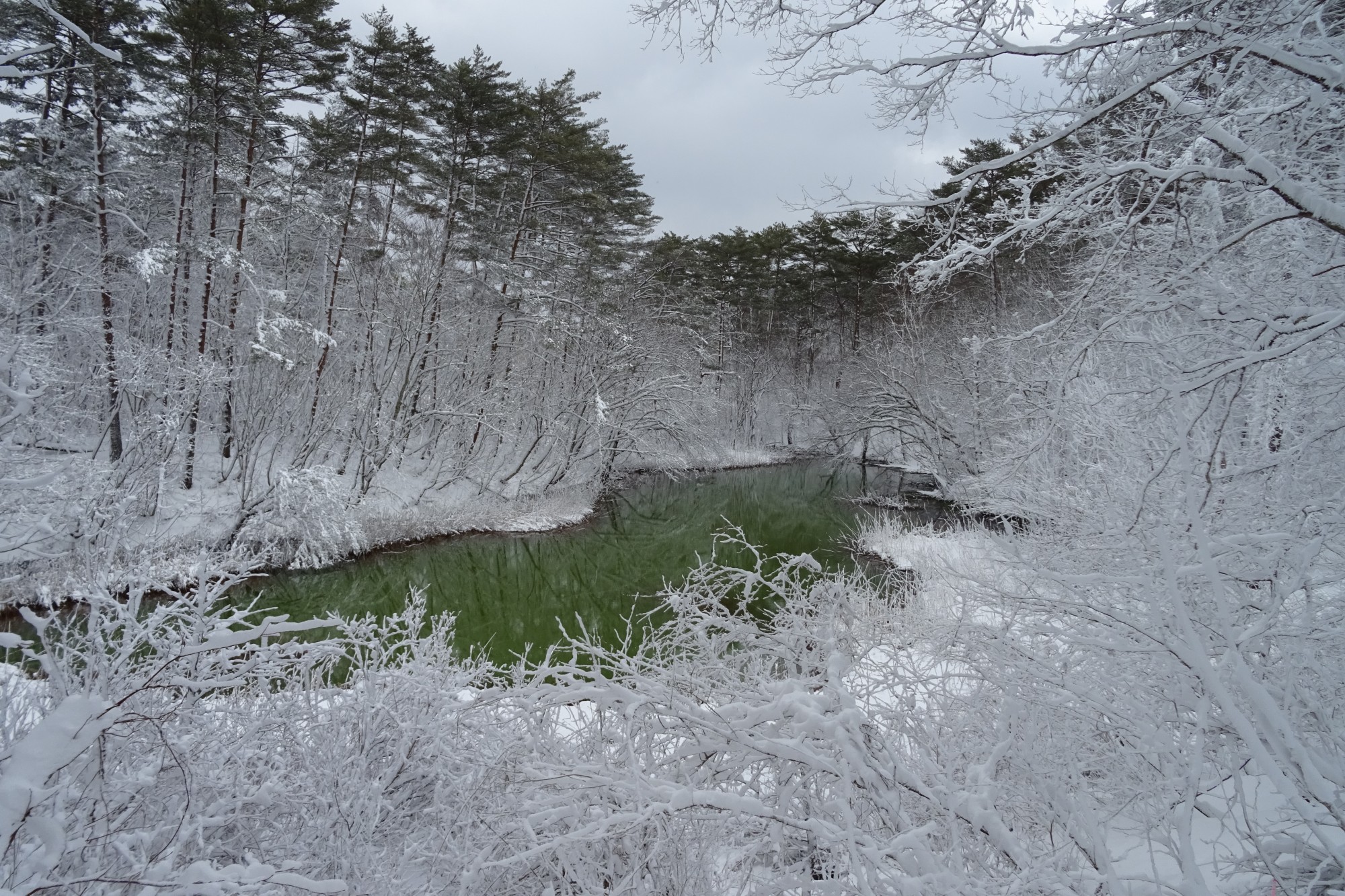 Before departing on our last day, we succeeded in trekking through deep snow to Yellow Waterfall. Sulfur and iron-rich water seep from a cliff along a hiking trail leading up Mt. Bandai. In winter, the water transforms into the 10-by-8-meter (32.8-by-26-feet) natural ice sculpture named Yellow Waterfall.

To get there, ride to the highest ski lift station at the Urabandai Ski Resort. Tickets are less than USD 20. Follow the ski course down on the backside. Then, look for a sign and trail on the right. Follow the footsteps of other climbers.

Despite the yellow waterfall being a sliver of what I had seen in photographs—due to the warm winter—the trip through a forest and views of the ski resort, Mt. Bandai, and distant mountains and valleys were spectacular. The roundtrip takes about two and a half hours. 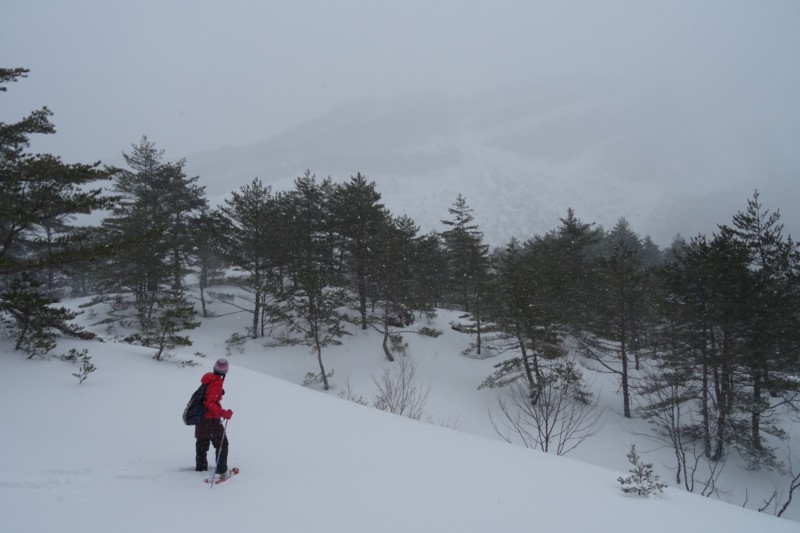 I had hoped to stay at Bandai Lakeside Guesthouse, but no rooms were available on the dates that we wanted. Manager Genta Kanemitsu efficiently and kindly responded to all of my questions about activities in the area. Reviews of his guesthouse, which is in a beautiful location, are favorable.

Reserve rooms in advance at this popular accommodation. I understand that they accommodate dietary restrictions, including those of vegetarians and religious groups. Additionally, Bandai Lakeside Guesthouse will assist guests with joining tours.

However, we ended up on the shores of Lake Soharako in a clean Western-style pension named Baked Potato. Despite the odd name (the owner named it after a jazz club in New York), cooks prepare full-course gourmet French dinners and huge breakfasts with eggs, bacon, and sausages. Guests share toilets and bathing facilities. Considering the quantity and quality of the meals and the comfortable rooms, the rate of US $75 person was reasonable. My only complaint is that the owners were not willing to accommodate vegetarians. 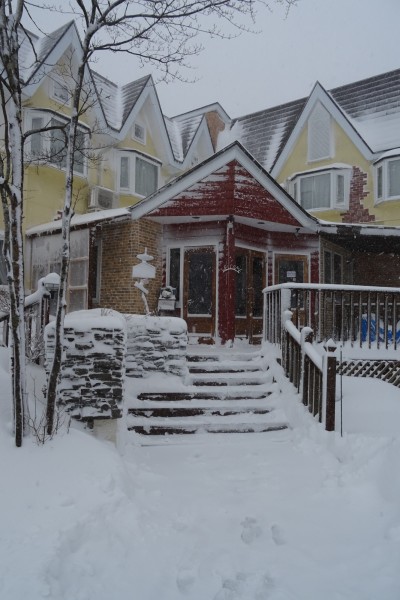 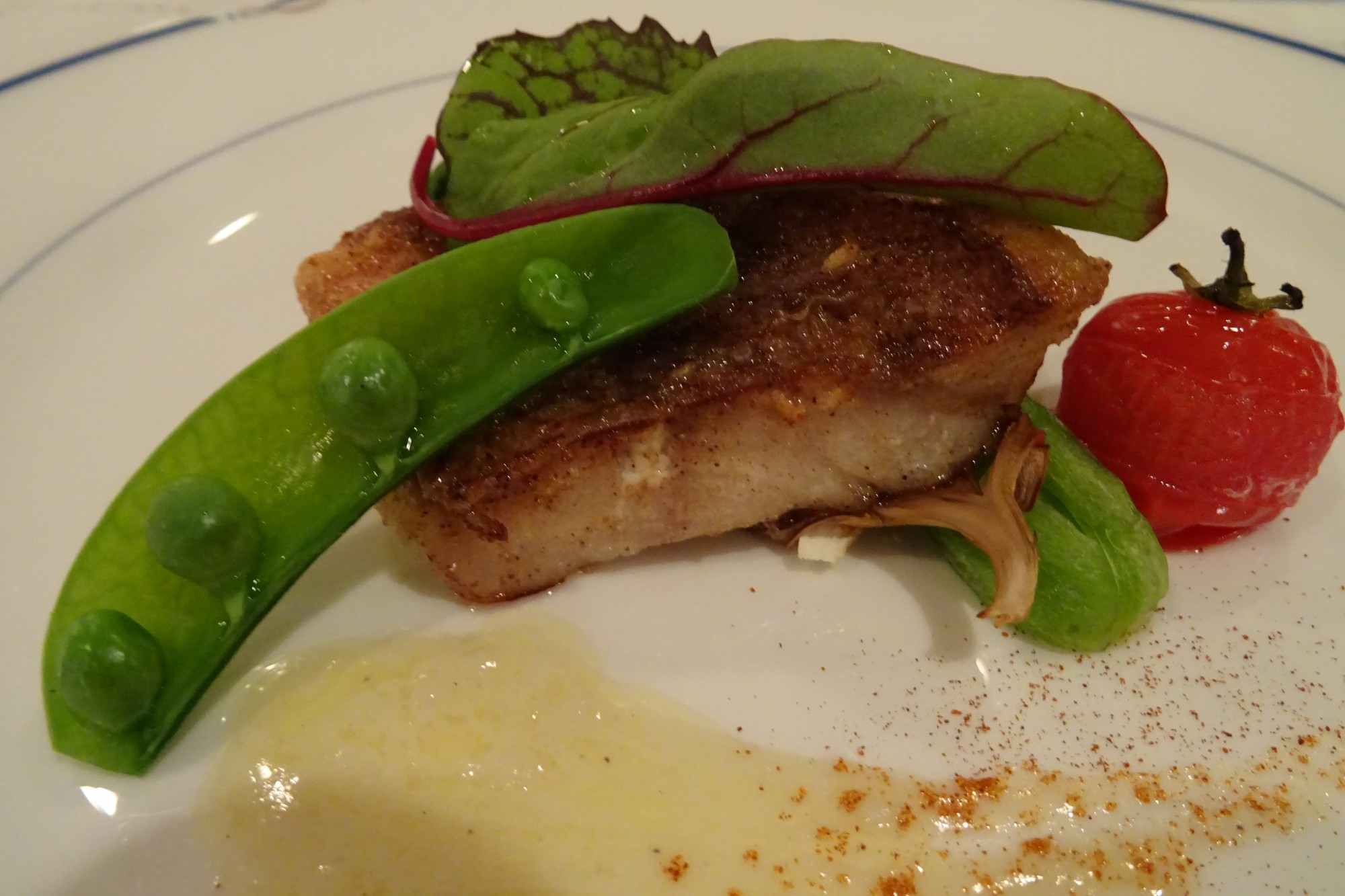 Public transportation from Tokyo to Urabandai is available, but I advise renting a car or staying in a hotel that will help you with local travel or provide tours.

However, if you do choose public transportation, board a JR Tohoku Shinkansen (bullet train) to Koriyama in Tokyo. Then, change to a JR train heading for Inawashiro Station. From Inawashiro Station, take one of the local buses to Urabandai’s town center. Contact the hotel that you want to stay in for specific directions.

A chart on the website of the National Centers for Environmental Information shows that February 2020 was the second hottest in recorded history. The author of this article believes that all of us must take numerous actions to reduce the severity of climate change. As such, he is contributing his payment for this article to NPOs that work to promote tree planting and forest protection. The author hopes that you will do something good for Earth today.

Would you like to go or have you been to Mt. Bandai in the winter? What activities would you like or did you enjoy? Have you noticed a change in winter weather there or elsewhere in Japan? Let us know in the comments below! 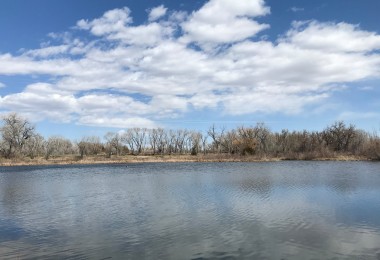