The Jura mountain range runs along the French-Swiss border with some lower foothills just inside Germany in the north. On the Swiss side of the border the mountains drop steeply, often with impressive limestone cliff faces, down to a plateau which rises again to meet the main Swiss Alps.

The Jura Mountains were used by the French Resistance during the Second World War to hide from the German anti-partisan operations. One of the local groups of resistance fighters was known as the “Maquis de l’Ain et du Haut-Jura.” On Nov. 11 1943, defying a Vichy government ban on commemoration of the allied victory in WW1, the maquis marched into the centre of the local town of Oyonnax.

As a symbolic gesture they held a minute of silence to mark the 25th anniversary of the ending of the First World War, laying a wreath with the inscription “Les vainqueurs de demain à ceux de 14-18” (the conquerors of tomorrow to those of 14-18). When this was reported in the English press a few weeks later, it was said to help convince Churchill of the need to arm the French resistance fighters.  Oyonnax was later awarded the Médaille de la Résistance, which is featured on its coat of arms.

The peaks in the Jura aren’t high by alpine standards.  The highest is only 1720m, but the forests and farms of the area make excellent ground for Nordic skiing and snowshoeing. It’s a popular area to go snowshoeing for locals and it’s well known to people in France, but it’s rare that the area sees any visitors from other countries. The Nordic skiing might be some of the best in the world.  There are 52 villages linked by more than 3,000 km of marked trails and you can make journeys of a few hours or many days.

The small peak of Mont d’Or sits (just inside France) with steep rocky cliffs that face into Switzerland and gentle, forested slopes running down into France. These slopes are ideal for Nordic skiing and snowshoeing.

The rhythms of village life in the mountains are dictated by movement of cattle up and down the mountain from their summer grazing to their winter cowsheds, these migrations are often accompanied by local festivals and fêtes. The high mountains are dotted with buildings known as alpages used in the summer to milk cows and often to make cheese. Apart from Switzerland, what other country makes a soft drink from milk whey? Rivella is made in four different forms in Switzerland, but it has not caught on in other countries so far.

So, inevitably, when we visit an area we see the story of the landscape through the cheese produced there. And Mont d’Or is home to some interesting local cheeses. During the summer months when the cows graze on the rich pastures, there’s a lot of milk produced and local cheeses like the French Gruyère de Comté. The Comté cheese takes up to 600 litres (160 U.S. gallons) to make just one cheese of 35 kilos (80 pounds); that’s the daily milk production of about 30 cows. It takes between six and 24 months to fully mature this cheese. It’s made at around 190 different farms and dairies which are called fruitières in the Jura area.

In the winter, the cows spend most of their time in cowsheds eating winter feed.  The amount of milk they produce reduces, which many fruitières switch their production to a different cheese with an interesting history. On the French side of the Jura they’ve produced a goat cheese called Chevrotin.  Part of that name is from the French word “chèvre,” which refers to a goat’s cheese. Over time this came to be made with cow’s milk and the name probably changed to Vacherin based on the word “vache” or cow.

Vacherin Mont d’Or cheese is only made between Aug. 15 and March 15 each year.  The first cheeses don’t appear in the stores until Sept. 10, by tradition.  One way of serving this cheese is to wrap the spruce wooden box containing the cheese in aluminium foil, break the skin with a fork, place some garlic in the new holes, then pour about 100 ml of white wine over it, and bake in the oven for about 25 minutes at 200-degress Celsius. This would be served over potatoes. 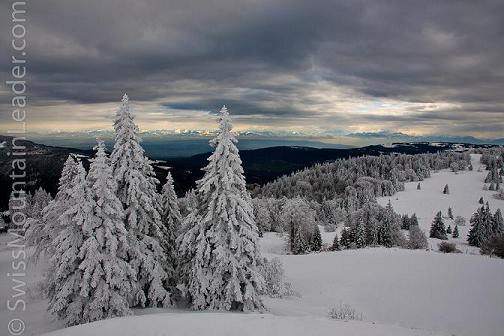