I cruise through the moonlit trail, the world cold, and silver in this wintery twilight. The sound of my feet and the squeak of the snow under my snowshoes reverberates off the dense stands of spruce, which span infinity in every direction. I’m only a couple of miles in, but I can already feel the cool air freezing my breath to the slim beard on my face.

My ears and fingers burn from the cold, despite my wool hat and mittens. My eyes dart across the silver landscape, scanning the snowpack as I go. I weave a bit as I fly down the trail, following the best line of snow. I look for a firm but not yet frozen path, careful to avoid the areas where I would sink in too deep or places where the crampons of the snowshoes would not catch. Then, I call out audibly as I pass by a frozen lake surrounded by alders in an attempt to alert any moose that I have entered their domain. In the distance, I hear a loud body scamper off deeper into the bush.

I then roll onto my forefoot to allow the teeth of my snowshoe’s crampons to dig in as I climb a small embankment. Back down the other side, I ride onto my heels and allow my gate to open as I glissade gracefully between steps. I press onward down the trail, deeper into this milky twilight. This is why I snowshoe run. 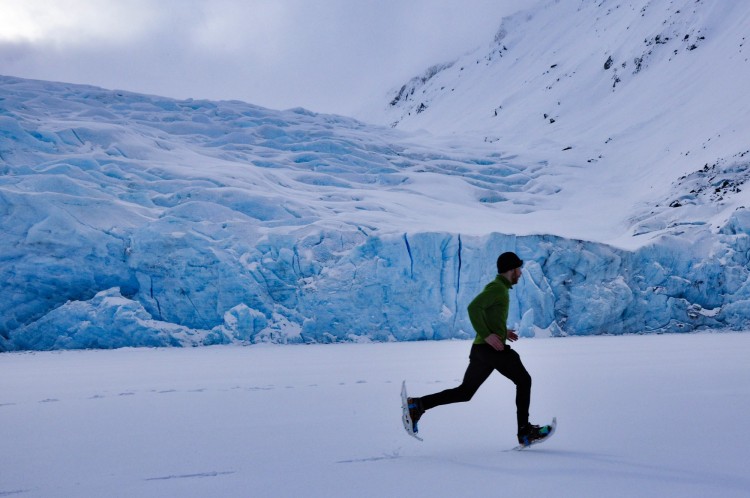 Running amidst incredible scenery on a firm but not yet frozen path. Photo: Connor Dunleavy

The Transition to Snowshoe Running

I started snowshoe running as a matter of practicality. Living in Alaska, running outside can be tricky in the winter. Besides the bitter cold weather and short days, there is also a lot of snow. The trails can be snowed in as early as October and may not thaw out until June. Unlike most places in the United States, Alaskans don’t use road salt and sometimes don’t plow roads altogether. This makes for all-around treacherous running conditions.

In normal times I would have trained on a treadmill to stay in shape for a summer season of trail running. However, this year was far from normal, adding an additional challenge to my running. In Alaska, gyms remained open for the most part. Like many runners, however, I felt uncomfortable with the prospect of catching the virus during a training session in the gym.

I tried cross country skiing the trails in place of my workouts but found it a bit awkward and a rather poor substitute to running. A brief Google search lead me to the wonderful world of snowshoe running. I started by hitting the trails near my cabin, running in just a regular pair of hiking snowshoes at first.

Shortly into my first run, I discovered the magic the snowshoe provided. I found I wasn’t running as much as I was floating through the powdery snow. It wasn’t easy, but by the end of the run, I was smiling broadly beneath my frozen beard. I was hooked. 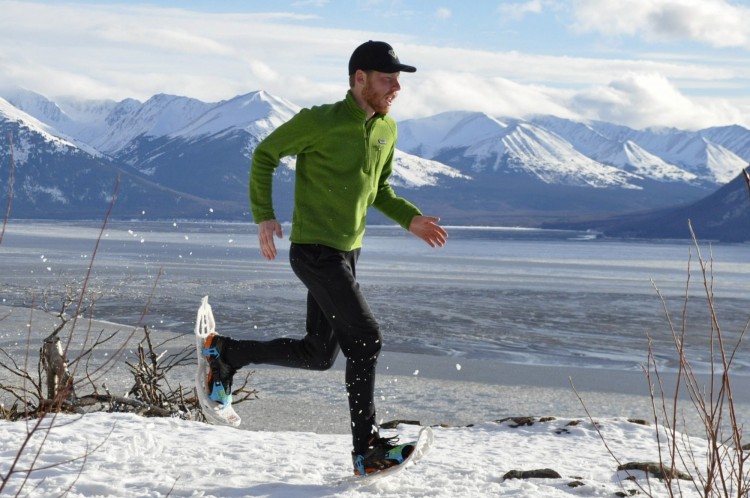 Snowshoe running is an excellent way to stay in shape during winter. Photo: Connor Dunleavy

Tips to Get Started

To me, the appeal to running comes from fluid motion and a sense of presence the activity brings. With a bit of practice, I found that the snowshoe enhances these aspects of running for me. Here are few tips to keep in mind for the first-time snowshoe runner

The rhythm of your steps

To get the snowshoes to function properly, you have to pay attention to your steps’ rhythm a bit more than you would on a regular run. Running in snowshoes requires you to drive your knees higher, keep your legs slightly farther apart than usual, and land with your foot flatter against the ground than you would on a traditional run.

To accomplish all this without tripping or bashing the back of your legs with the snowshoes, you have to watch your form and the cadence at which you move. When you are running in snowshoes, each step must become a well-choreographed dance. This sounds arduous, but this is actually where a lot of the joy is derived. Snowshoe running is like rowing, where the focus on form, technique, and rhythm is part of the pleasure rather than a source of disdain.

Snowshoe running is also all about reading the snowpack. Not all snow is the same, and finding the right snow can make a world of difference on your runs. The best snow is hard enough that you are not sinking in too much but not too frozen for your crampons to catch. Deep or soft snow can slow you down quite a bit and force you to exert much more energy.

Snowpack can vary quite a bit, even on the same trail. When I’m running, I constantly scan the trail ahead of me to find the best snow. Being on constant watch for the best snow pulls one’s entire mind into the present moment. I have found this helps me get into that “runner’s flow” much faster and makes it easier to enjoy my daily efforts.

Because the type of snow you are running on has such a dramatic effect on your overall time, you will find that you don’t need to pay as close attention to your watch. You can run the same trail ten times and get ten very different times. Because of this, you have to rely on perceived effort instead.

While this may sound scary to some, this is another great joy of the discipline. I find that instead of chasing some set training pace, I spend more of the snowshoe run listening to my body. I’m still competitive, and my workouts are still hard.

However, I find that without being able to gauge my efforts as effectively with a watch, I don’t find myself pushing myself harder than on any given day. Instead, I allow my body and the snow to set the pace. Because of this, I have found a much healthier relationship and a greater appreciation for my daily runs.

While I came to this sport as a means of staying in shape, I found snowshoe running to be a distinct and enjoyable form of running in its own right.

What about you? Have you tried to run on snowshoes? What has been your experience, and what tips do you have for snowshoe running? Please share your thoughts in the comments below.

Read Next:
Choosing Running and Racing Snowshoes Starts Here
Top 10 Snowshoeing Tips for the First-Timer
Snowshoe Nationals: First-Time Perspective
10 Ways to Get Outside and Explore Your Local Backyard this Winter