So how does a scuba diver enter the cold waters of snowshoe racing? That question came from a Twin Cities athlete seeking a challenge to seriously pursue in winter. Look no further, you found it: just dive in. 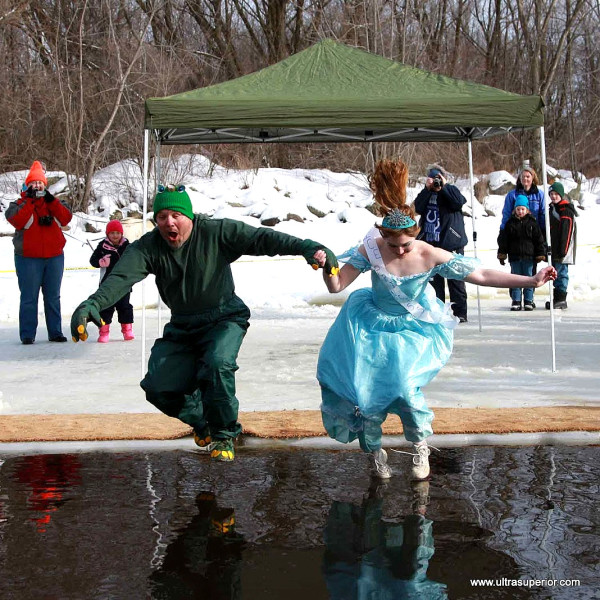 She asked good questions like “Where do I start?” Finding snowshoe races becomes as easy as searching those words.

On a more global basis, search the World Snowshoe Federation for “snowshoe races all over the world.” Snowshoe Magazine maintains an extensive list of events in racing and snowshoe racing files including articles such as “Special Olympics Team USA Snowshoers,” “Transcending the Winter Warrior with Wholistic Fitness coach Steve Ilg’s Fitness as a spiritual practice” and “Empire State Games Test Speed and Endurance.” 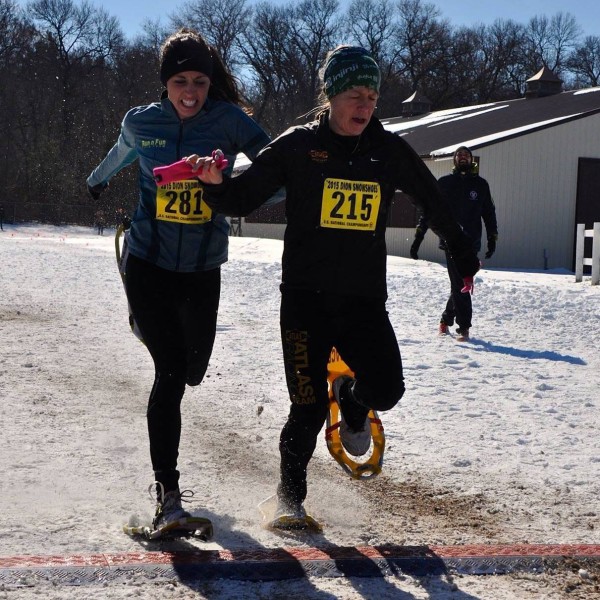 With a more local flavor seek out the snowshoe racing series throughout the country. A partial list includes: In the northeast the Granite State Snowshoe Series presented by DION Snowshoes plus WMAC’s DION Snowshoe Racing Series.

In the mid-central U.S.A. join The Braveheart Snowshoe Racing Series featured on Cutemoose.net, while in the Rockies beat a path to Beaver Creek’s Snowshoe Race Series.

Locally, there are many more series to consider such as Madison Wisconsin’s Snowshoe Scurry Race Series, which just introduced Fat Tire Bike Racing. These races are also a part of The Braveheart Snowshoe Racing Series. Enter the series or just search out the individual races listed as part of them. 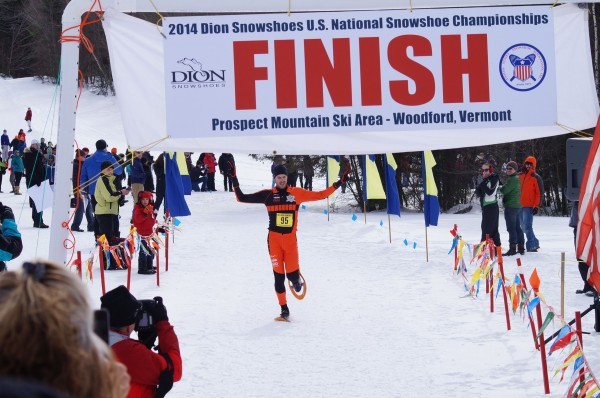 Most events offer 5 km and 10 km distances while an expanding number include the popular tests of half-marathon and even marathon layouts for one’s snowshoe racing pleasure and pain.

Then go get the equipment. Surprising for the small outlay compared to, say, scuba diving as many get it wrong from the get-go. I did, so I know about that. The sport has grown dramatically since I laced up a pair of heavy woodies back… well, put it this way: I raced Grandma’s Marathon, Duluth, Minnesota in its sixth outing, the year after Dick Beardsley set the 2:09:37 record lasting until the 38th edition. Then Kenya’s Dominic Ondora erased 31 seconds from the original mark. 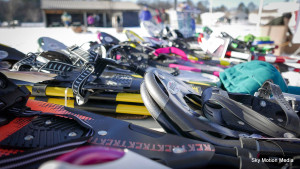 Lots of snowshoes at the national championships (Eau Claire 2015)

Chris J Dunn wrote in “Racing 101” on the Granite State Racing Series home, “Snowshoe racing isn’t a gear-intensive sport but does require thoughtful consideration of the most important element… snowshoes.  Although each manufacturer touts their patented bindings, cleats, and deck-shape, the single most important consideration when selecting a racing snowshoe is size.” He humorously points out, “The US Snowshoe Association has set the minimum surface area for racing snowshoes at 120 square inches, but unless you’ve got a degree in engineering it’s next to impossible to tell if you’ve got a ‘legal’ pair of ‘shoes.  Instead, most racers choose a snowshoe based on its length.  The basic principle here is ‘smaller is lighter and lighter is faster.'”

Snowshoe Magazine displays pages of information for most of those supplying snowshoes whether for recreation, racing or both. Those companies will offer qualified equipment, but many competitors choose to race larger equipment. I know. I see them all the time as they pass me. As Dunn points out–for racing, size matters. 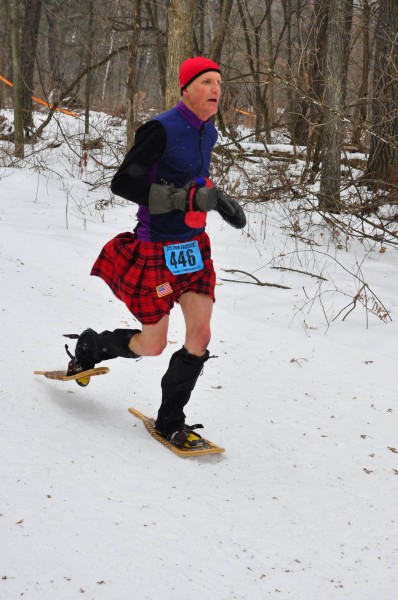 Don’t be cavalier with the idea of recreational snowshoeing. Snowshoeing just by definition of wearing those appliances on feet increases the effort by about 50 percent more than just running on snow-free terrain. Andrew Nugara in his book Snowshoeing in the Canadian Rockies points out, “… the term ‘recreational snowshoeing’ covers everything that doesn’t need use of a rope, either for glacier travel or for belayed climbing. The term ‘recreational’ here does not imply any particular level of ease or safety.” He further explains snowshoeing the Crown of the Continent, Mount Lineham, is “quite difficult and strenuous and puts you directly on or very close to avalanche slopes. Don’t get lulled into a false sense of security because you are a ‘recreational snowshoer.'”

My inquirer asked about training and snowshoeing with groups. Now this is where real fun, camaraderie and friendships prosper. Local snowshoe stores and race directors will know those groups and when to meet. For example, Jim McDonell, the RD of the Braveheart Snowshoe Series, hosts a couple of those weekly during the snow season.

Training follows many of the hallmarks of running, but since snowshoe trails lay off-road as do events, hill work needs emphasis. Marathon Olympian Ron Daws (1968) pointed out the value of that particular technique as a student of legendary Arthur Lydiard. In other words, embrace pain as fun and misery as your friend.

State parks (use link to find all parks in your state) and local conservatories like the Richard T. Anderson Conservatory, Eden Prairie, Minnesota, near where my scuba diver lives, provide excellent trails to cover with snowshoes. Many ski resorts provide terrain specifically for or accommodating to those whom prefer making way with snowshoes. 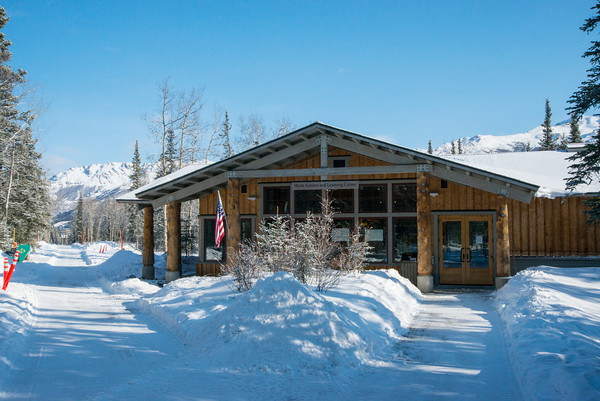 Denali National Park Welcome Center: six million acres to snowshoe in Alaska. When done with all six million, kindly let me know . . . I want to write an article about you.

The opportunity exists to join the United States Snowshoe Association, a very welcoming and critical asset to the sport. Visit their Facebook page along with the World Snowshoe Federation page. Include Snowshoe Magazine’s Facebook in your wanderings. Give them all a “Like” if you wish. Then lay plans for a dream winter trip to snowshoe competitive events in Italy on two consecutive weekends this February, 2016, plus visit Milan, Verona and Venice. Read about it here.

So, to go snowshoe racing buy racing snowshoes, practice and train, socialize, follow snowshoe information sources, and be sure to say hello as you pass me. I enjoy taking credit for your happiness.