From racing regional United States Snowshoe Association (USSSA) qualifiers to the national championships, a constant is Bob Durband on the course, happily trudging trails. This weekend marked a particular notable event in his life.

No, he didn’t win a handsome position plaque or honor of any type. What he did win, though, occurred 25 years ago when a St. Jude coronary heart valve saved his life and put him here on the starting line; not looking up at it. “It’s a marvelous day,” he kept saying. “It’s fun to be out here racing….” 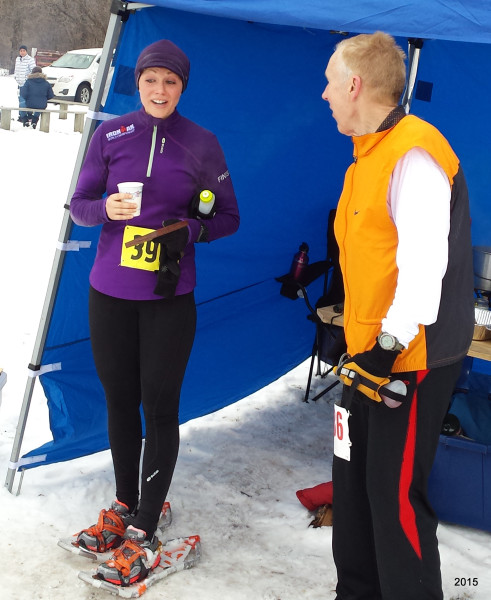 Affable Suzie Fox explains her fun at the inaugural Winterrific Half, standing just outside the finish-line tent.

The fifth year of the Winterrific Snowshoe Races found two new distances book-ending the popular USSSA Qualifier and Minnesota State Championship 10km. The 5km provides a fast distance for the élite or a “test it” distance for new snowshoers. The Half-Marathon replaces past year’s 30km. The Half is the hot distance in snowshoeing and road running. The USSSA National Championships, February 27–March 1, 2015, Eau Claire, Wisconsin, features for the first time the Redfeather Half-Marathon, a new championship for the organization. 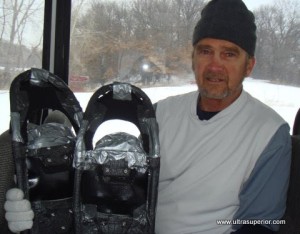 Riding a bus with Bob in 2009 for Cindy Brochman’s last snowshoe race at the Snowshoe Shuffle.

The Wall Street Journal featured a report in October, 2014, “The Half-Marathon Achieves Its Personal Best” stating the distance now “counts more than three times as many annual finishers as the 26.2-mile marathon.”

The popularity quadrupled over the past 15 years, and Winteriffic is the first to have one in the region on snow. The Jeff Winter City of Lakes Half Marathon, historically run as a 25 km, celebrated its first year at this distance last summer. Two great races, one winter, one summer, both half-marathons. Participate in both. 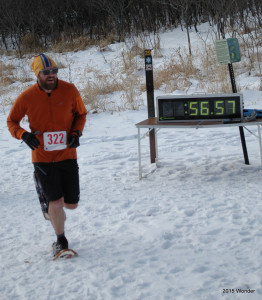 The Winterrific hot-half attracted top athletes in the area such as overall winner, Ironman Triathlete Suzie Fox, touring the two laps for a clear win in 2:08:06. “This was my first snowshoe race, so I had no idea what to expect.  The conditions were great, the second loop raced much tougher than the first after all the racers had passed through the snow once.”

Additionally, the sun and above-freezing temperatures, while nice for the athletes, ate into the snow cover. Fox continued, “I carried my hydration because I didn’t think there was going to be anyone waiting around on the cold, snowy trails to hand me a cup of water, but there were three aid stations on each loop with energetic volunteers passing out any nutrition one could need. 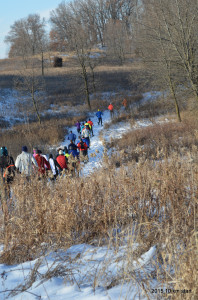 There is no better winter workout than snowshoeing; what a blast! I highly recommend this race for next January, come on out and play in the snow at Murphy-Hanrehan Park.” No stranger to this park, she won the women’s class of the 2012 Surf-the-Murph 25 km trail race. Fox plans another Wisconsin Ironman next summer (in 2014 a sizzling second in her division, 9th female, 136th overall) and may once again grace Hawaii’s famous Ironman with her enthusiasm.

“Everyone at Winterrific was so friendly and encouraging. The race directors and volunteers were the kindest people; they prepared homemade chili, soup, and bars for all participants to enjoy.” She plans to compete in the 2015 Dion Snowshoes U.S. National Snowshoe Championships in Eau Claire.

Paul Schaefer (2:12:10) edged Chuck Fritz by one tick for silver overall, but first and second in the class. Fritz, from Clive, Iowa, left with his wife and two daughters for the Mall of America post-race before heading to Duluth for Sunday’s Boulder Lake Snowshoe Qualifier.

Luke Nelson crossed with a 2:15:44, ahead of Scott Wagner by a dime. Steve Greseth snuck in before Reed while Lea Wells finished the group in a respectable 2:55. The Half distance looks like a terrific move by race directors Colleen and Mike Millonig. 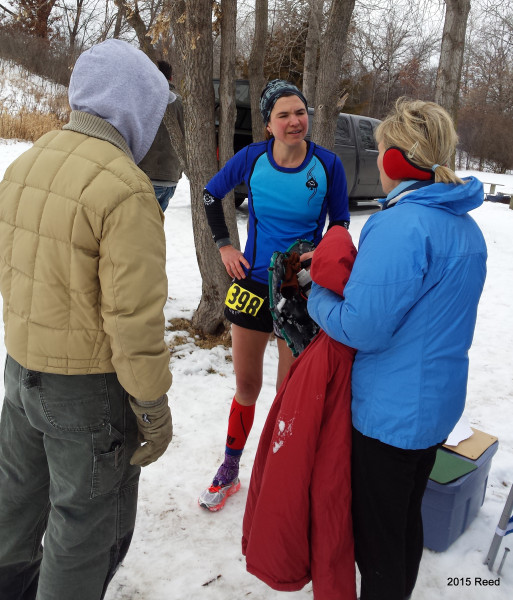 Bronze medalist in the Half, Robyn Reed asks Mike and Colleen Milloning why they’re bundled up so . . . .

Capturing Minnesota’s State Snowshoe Champion for 2015, Bill Wonder (55:57) edged a blazing Braveheart, Jim McDonell, by just 22 seconds at the finish. Eau Claire’s Nathan Jackson chased in a cool 56:56, scouting this layout for ideas at the nationals, for one of the most dramatic state races to date. McDonell led entering the turns of the distance, but Wonder was a blizzard following his trail, passing for the win.

McDonell offered this intriguing play-by-play account: “During the race I passed Nathan (Jackson), then Bill (Wonder) passed me,  I passed Bill back, and then he finally passed me in the last half-mile. Bill saved my bacon when I started to go the wrong way at the Lake Loop, too, so he definitely deserves the win. 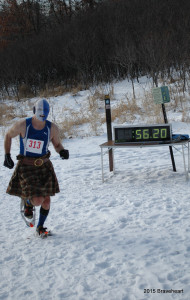 Nicole Finstad won the Women’s Minnesota State Snowshoe Championship for 2015 with a hot 59:27, good enough for a top five finish, too. Kelly Wonder took a second overall while Mikala Shremshrock nailed the bronze.

Hot after that top five, though, came Ryan Albu, the 2014 winner, and race leader until the sneaky turn at the lake loop also caught him and Mike Brose going the wrong way. The little sign set off the trail with directions looks even smaller at the speed the front-runners tour the course. A Garmin estimate showed Albu at a 10 km time that would have challenged today’s leaders. He handles that extra distance well, finishing the Surf-The-Murph last Fall in third for the overall bronze 25 km event.

Brose returned to snowshoe racing after a lengthy layoff in racing, period, tending to a nagging injury that doesn’t want to respond. His 1:01:40 for probably eight miles after following Albu offers a glimpse at his potential speed.

Brad “Don’t rib me” Canham didn’t breathe for the distance, thus he had no pain from a nasty rib injury, yet finished in a fast 1:10:20, while Mike Grund crossed in just under 1:10.

Paulette Odenthall in 1:24 (a 50 km finisher at Surf-The-Murph), Mary Donnelly’s 1:34 and Pam Ogden’s 1:43 represent some of the best of the rest for these veterans of Winteriffic. 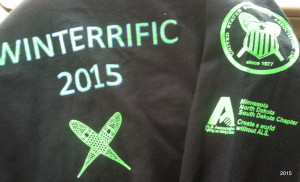 A staple of the Winteriffic Races: sharp long-sleeve shirts, no doubt designed by Colleen Millonig . . . .

The fast 5 km, with its cross-country finish joining the regular trail about 25 yards before the finish line, saw Garrett Williams win the inaugural overall honors in a quick 26:56 while Samuel Kessler pressed with his 27:37. Rebecca Sauber took the women’s win and third overall with the last time under 30, a 28:25.

Lonie Sauber crossed in 30:59 with Rich Lachowski pushing from a couple of minutes later. 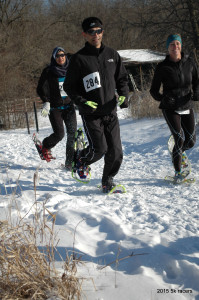 Two senior trail pros, Donny Clark and Maynard Lagace, met racers with youthful enthusiasm at the finish line. They accosted another senior 10 km finisher by surrounding him with arm lifts steps from the clock; efforts to disentangle them proved useless.

Winterrific’s goal is to raise money for ALS; the more who race, the bigger the check. This year the donation climbed to $500. If everyone returns and brings another snowshoer in 2016, the contribution to help cure the disease will exceed $1,000 . . . just saying . . . .

Send your note to Phillip@ultrasuperior.com