Spending a few months in Idaho took me from hot weather in September to snow in December. 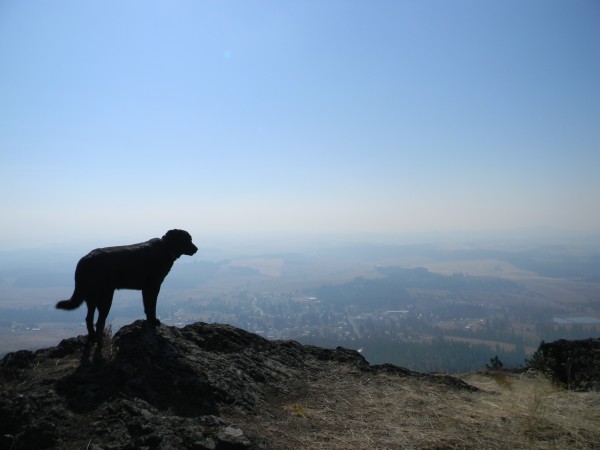 Jake gazing down on Deary Idaho through thick smoke.

The Idaho Panhandle was hot, dry and smoky from the relentless forest fires that had been plaguing the state all summer. Fires burned  in Western Montana and Eastern Washington State adding smoke to the sky as well; while a few were human error, most were started by lightning.

The local people I met told me they hadn’t seen rain in months, and although I was enjoying the heat, I understood.

Nearby Boulder Creek was a welcome relief from the heat and I spent many afternoons hiking and enjoying the scenery on the trail.

In late September I decided to go for a hike up Potato Hill dubbed (Spud Hill) by locals, in the town of Deary.  The mountain is an ancient volcano with an elevation of just over 1,200 feet; it is made up of volcanic rock, but has not been active for millions of years.

The trailhead is at the north end of Main St. and begins ascending the mountain immediately. The trail is mainly dirt and is shaded from the hot sun most of the way. 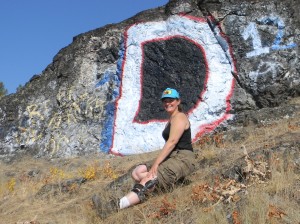 There is a tower along the trail, which is about a third of the way up the trail. Here you can take one of two trails. If you stay on the main trail past the tower, it will make a long cut away from the mountain before turning back. Or, you can turn and hike the shorter but much steeper trail that cuts up behind the tower; either way the two meet and cut up the back of the mountain to the top.

With my dog Jake by my side and extra water in my backpack we started up the trail. It was dry and dusty due to the intense heat and lack of rain over the summer. Forest fires burning miles away filled the air with smoke, and the higher I climbed the thicker the smoke became. 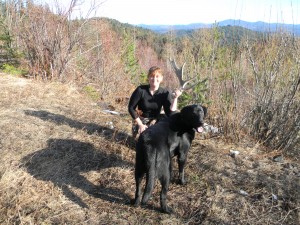 There were many different types of tracks in the dirt including: elk, deer, and coyote. During a later hike I found a well-used game trail and cut off of the main trail to have a look. It led me to a bench halfway up the front of the mountain, which looked like the perfect place for moose to be living. Sure enough, upon a closer look I found moose droppings, beds (areas where they bedded down) and tracks everywhere.Other big game in the area, which I did not see any sign of are: bears, cougars, and wolves. They are present though, and on other hikes I took with my Dad in the surrounding mountains we crossed over cougar and wolf tracks in the snow.

I reached the top in just over an hour, exhausted from the heat. I sat down on a rock bluff facing north and retrieved the water from my backpack. I found a shallow indentation in a rocky surface and filled it full of water for Jake, three times.

We then made our way around the front of the mountain to see the view of town. A large red and white “D” is painted on a rock bluff at the top of the mountain, and can be seen from town. My goal was to make it to the top and get a picture of myself sitting in front of it.

After taking a few pictures of town and the mountainous terrain on the backside of the mountain, I headed back down the trail and into the shade of the trees. Jake had enough of the heat too, and began rolling in the dirt whenever I stopped.

I drove to nearby Boulder Creek.  Jake ran straight into the water, drinking and swimming at the same time.

First Snow of the Year on Spud Hill 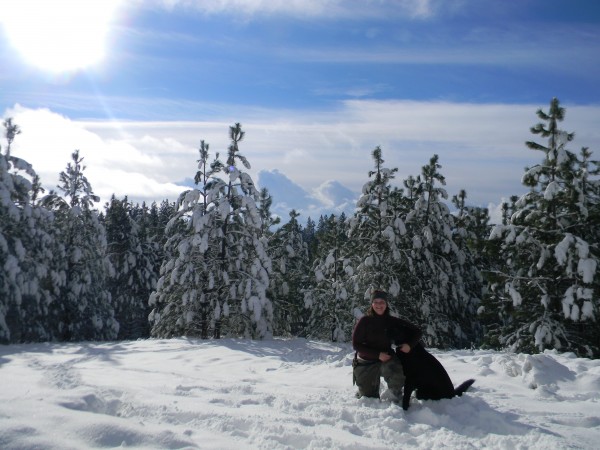 A much cooler hike up the mountain was in early December, a day after the first significant snowstorm of the season. Although it was a beautiful day with all the new snow and blue sky, I hiked only halfway up the trail.

By the time I had reached the tower; the snow was becoming deeper. My snowshoes were at the foot of the mountain in my truck, “not a good place for them.” I turned at the tower and started up the steeper of the two trails, but I only made it about halfway up before turning and heading back down.

Snow storms kept coming and it wasn’t long until I could snowshoe from the front door of my Dads house. I went snowshoeing almost every day of December, thanks to all of the storms passing through and leaving plenty of snow behind. 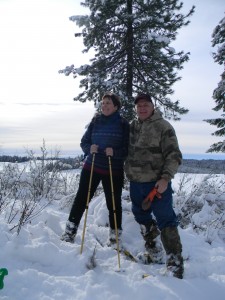 My favorite day of snowshoeing was Christmas Day. I awoke to a freshly fallen snow and clear blue skies sporting yellow beams of bliss across the morning sky.After opening our Christmas presents, we headed outside to go for an early morning snowshoe.

Leaving from the front door, we crossed the yard and headed into the field I had hiked and went snowshoeing in many times. The new snow was deep and powdery, and made the leisurely snowshoe more like a workout routine.

Dad took the lead breaking trail while Jake ran circles around him. We climbed the hill and then headed into the forest, thick with large coniferous trees. The needles that hang from some of these trees can be up to a foot long. I gather these needles into large bunches and use them to make baskets.

We had a great morning, laughing and taking pictures of each other as we struggled through the snow.

It truly was a great way to spend Christmas morning.

While I was enjoying my time in the Panhandle, I quite often stopped by the same cozy hometown restaurant for breakfast. Usually it was full of the morning crowd drinking coffee and discussing the world events, just like all other small town eateries. I loved the small town feeling, great food and friendly staff.

It was there that I met Joni, the cook and waitress most mornings. One day we started chatting while I ate breakfast. She told me about how she had saved a gosling (young Canadian goose) that someone had found in the middle of the road.

The gosling still had its Egg Tooth attached to its upper mandible when she took it in. The Egg Tooth is a sharp hook used for breaking out of its egg. It should fall off within three weeks of breaking free.

A few months later the goose was healthy and growing, but concerned that he still wasn’t flying, 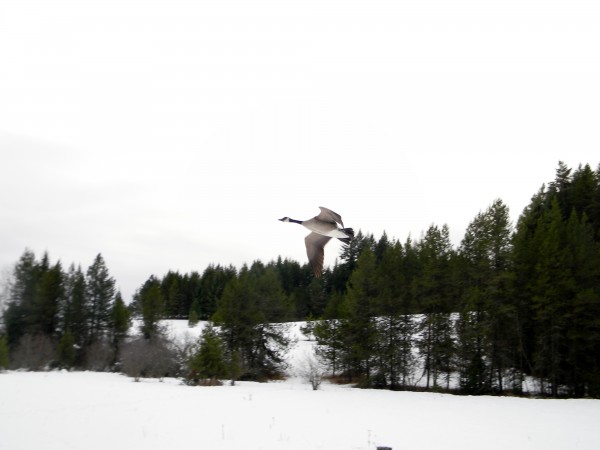 Buzzing me before landing.

Joni decided to run through her front yard flapping her arms as though they were wings. When she turned to look back, the goose flew over her head. “And the bonding began!” 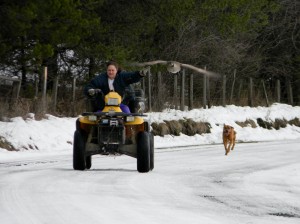 A family outing. flying, running and riding all in one.

A few days after she told me the story, I stopped by for a visit. Sure enough there in the yard was the goose she had named, Duck Duck Goose. He waddled around in the snow-covered yard as if showing off for my camera. To my surprise the goose was friendly and more than happy to let me pat him.

After introductions Joni started the four-wheeler. Duck Duck Goose perked up quickly and was ready for take-off.  When the four-wheeler began moving, he began waddling after her with wings spread wide, and then was airborne in an instant and flying alongside her.

When she began flapping her arms and jogging down the old road she lives on, he repeated the same take-off, only this time he was too fast for her. He flew past her and turned, flying across the field that runs along the road before turning back and flying over me. He landed in his yard up on the hill with the rest of his bird friends, which included: chickens and ducks.