The first decade of the annual Curly’s Record Run Snowshoe Race celebrated with snow and an engaging snowshoe run, reason enough for celebration. That there was snow for this race was a major highlight in the region, but the fact is snowshoers can have fun in all conditions, even in creating a new name: “Curly’s Global Warming Winter Snowshoe.” 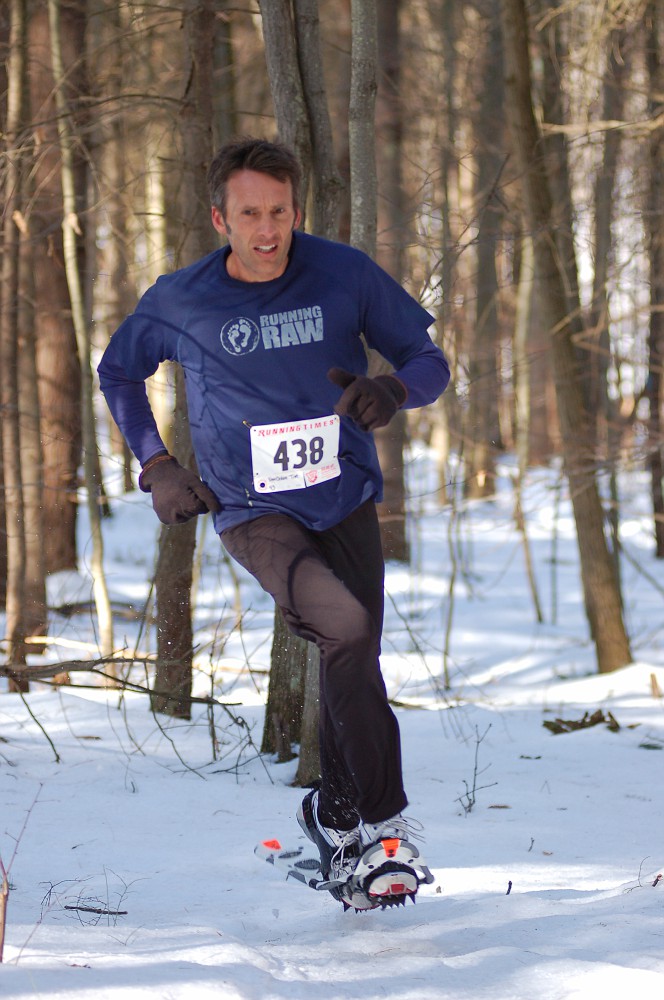 “On our 10th annual Curly’s Record Run Snowshoe, the results counted as both the Connecticut and Massachusetts State Championships,” said Beth Herder of the Beth and Brad RD team. “But because of the lack of a deep snow cover, we were unable to use the normal Curly’s Course and snowshoed on the alternate.”

“So instead of a lot of climbing and descending, the race ran on the lower snowy trails in the Pittsfield State Forest” based in Massachusetts and bordering New York. The Taconic Crest Trail rises to the top of the mountain range of the same name, a normal route for the event, but there are 30 other miles of trails from which to choose, plenty of alternates for an interesting event.

The famous Balance Rock is seen here, too, a huge 165-ton limestone boulder teetering on a base of bedrock looking every bit like a trophy to the forest. 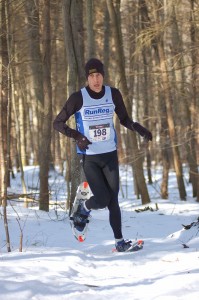 Ross Krause Dioning his way to a state Championship

The 2012 layout weaves through roughly 4.5 miles of single-track, all of it built by the Berkshire Chapter of New England Montain Bike Association. “65 snowshoers showed up to race despite the winter we are having.” (see video link below)

Tim Van Orden (43) of Bennington, VT, the 2011 USA Masters Mountain Runner of the Year, won the overall gold with a hot 32:31 (see special note at end). Postyn Smith (18), a Williams College student from Colorado, chased VanOrden but came up 10-seconds short for the silver. 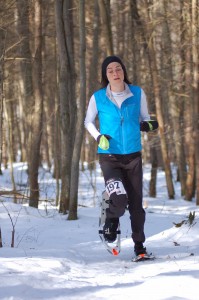 Keeping it all in the family, Ashley Krause wins the Women’s State Championship

Connecticut State Champion for the men is Patrick Fernald who is 39 in 39:39–really!–while the Constitution’s State Women’s Championship was elegantly captured by senior master, Kathleen Furlani. Furlani is an active snowshoer, participating in the Western Mass Athletic Club race series. She can be seen in and around East Windsor racing up-and-down dirt hills in the summer . . . wearing snowshoes. Why? Click on her name and read the Hartford Courant account of her training.

Other notables in the event include WMAC Hall-of-Famers Ed Alibozek, Jr, and son. Richard Busa had another fine finish.

Dion Snowshoes  provide snowshoes to entrants for the race. Denise and Bob Dion raced the course while visions of the finish line in Frisco, Colorado, the site of the 2012 USSSA National Championships starting February 24, 2012, occupied their thoughts. 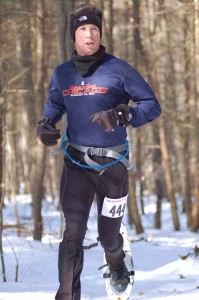 An interesting reminder from the park: “Don’t torment the black bears.” Left unsaid is the likely outcome of such harassing.

If you doubt the caution, check out The Edge, a 1997 adventure starring Anthony Hopkins and Alec Baldwin who encounter a particularly hungry omnivore.

Hammer Nutrition provided supplements, drinks and other goodies for all. 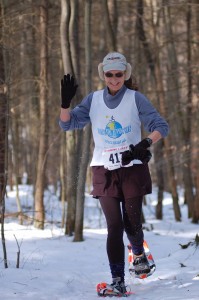 skied and participated in field and track, a true athlete.This scholarship program is generously offered to high school seniors planning to enter college in the fall. Qualifications are based on participation in high school sports, average grades (like Curly), and need.

Tim Van Orden from Vermont, a member of CMS, won 7 of the 14 WMAC DION Events he entered. He took the series title with a perfect 600 points. This is only the fourth time in the history of the series that the champion scored a perfect total. Van Orden also became the first man to win seven races in one season, topping Jim Johnson’s six wins in 2010. He also broke Johnson’s and Richard Bolt’s record of four consecutive wins.

Amy Lane of Massachusetts repeated as our Ladies Champion, winning six of the eight WMAC races she entered again! Lane runs for the INOV-8 Team. Her six wins her own record from last year with Kelli Lusk’s total from 2005 and only trails Abby Mahoney’s seven wins in 2009. Lane’s 541.44 points is the highest winning total in the history of the WMAC series, topping the previous best from Abby Mahoney in 2009 of 538.05. Amy capped off her season with another win at the Pittsfield Peaks Snowshoe Marathon.

Watch a video of the race! http://www.youtube.com/watch?v=GefCk7F5hFc

Write phillip@ultrasuperior.com and use the race name in the subject please.