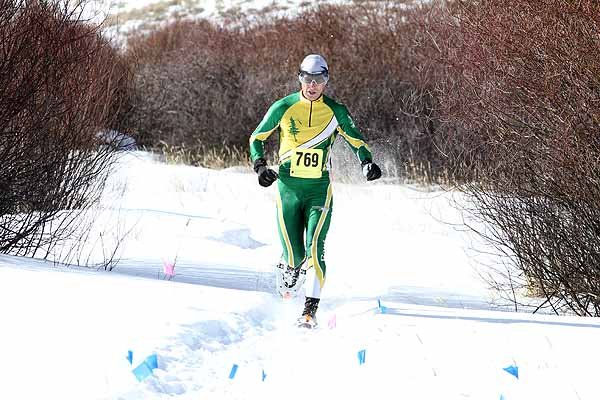 After last year’s Frisco Elk Fiasco, the US Forest Service (USFS) asked the race director of the 2012 Love Me Tender to avoid Iron Springs Open Space for the 2012 version. Where to go though? Ask and beg for the use of a Nordic Center, or maybe just run on the flats surrounding SHS multiple times. “There’s always that Highland Meadows Open Space to the south of Summit High School (site of the event),” race director Darren Brungardt said to himself.

He went running and asked a random owner of a property in the Highland Meadows area who the president of the HOA is. He got the info, went back to SHS, and started scheming on a new route. The HOA was more than happy to allow Brungardt the use of their open space, and the race was set. Highland Meadows came through for SHS, and now Brungardt had to make a new course.

He went exploring on Tuesday February 7th, his birthday. He found a nicely packed trail that went all of the way to the top of valley to the USFS boundary line. He found another really solid trail that wound through the woods. The trail popped back out into the open space, but where to go from here? Brungardt was clueless; this open space property was vast but only a few solid trails. He thought to himself, “What would my great-grandfather have done in 1937 while logging trees to the west of Loveland?”

“Gosh darn it Darren,” he shouted down the valley, “I’ve got snowshoes on; I will go make my own darn trail!” 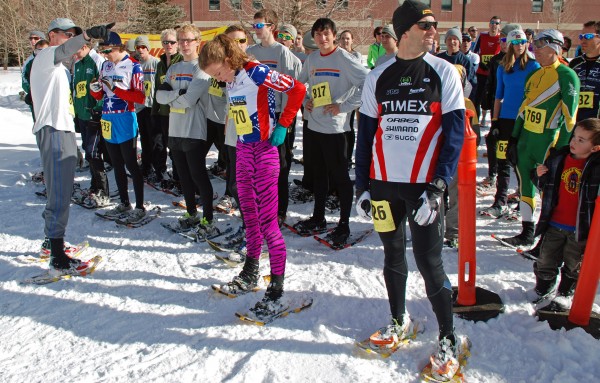 He did. Cutting a straight path to the willows below, Brungardt stomped out a perfect trail all the way back down to SHS. The trail cut through willows and sage brush, but it was a snowshoe trail, and it was going to have to work. This space is a swamp in the spring, summer and fall, but a perfect snowshoe course in the winter. He GPS mapped it the next day, and by golly it was nearly dead-on for a 5 km loop. He did it, a 5 km loop will serve as the Colorado High School Snowshoe State Championship 5 km, and the 10 km will double-run it for the USSSA qualifier. It is on!

This year’s race was a special one. Not only was going to serve as the precursor to the national meet, it was the first time the LMT had a title sponsor: PowerBar. They provided two bars, gels, drink mix, clothing giveaways, and drink mix for the runners. Peaceful Mountain, an all natural health company, provided racers with recovery cream for their weary post mace muscles. Bee Nut Free, a hypoallergenic snack company based in Summit County, provided racers with a tasty snack. B Sweet Cupcakes provided a cupcake for every racer. The SHS Girls’ Rugby Team made pots of chili too. DJ Impaulse was spinning tunes outside. The indoor race setting was set, back to the field.

Runners came and came and came. It turned out to be the biggest LMT/CO HS Snowshoe State Championship ever. Legends made their way to Frisco. Bill Perkins, a Northeastern transplant that made his name as one of the creators of Red Feather snowshoes brought himself over Fremont Pass to take on the freshly powdered course. He brought with him a new device that he invented that he is excited to unveil to the snowshoeing community this coming Nationals weekend. Adam Chase, Boulderite and Colorado’s Atlas Snowshoe Man, drove the 90 miles up the hill to take on the national preview course. 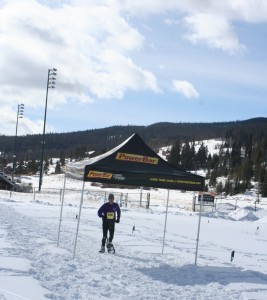 Stephen Holonitch has just trudgged down the mount on right. National racers will go up; could be a fast start.

Mitch Kasyon, now CU freshman but last year’s CO HS and National Junior Champ showed up sporting some fancy new Eastons and a national racing jersey he picked up at the Wisconsin nationals last March; Mitch chose to race the 10 km this time and challenge himself. His buddy and LMT Hall of Famer, Samantha (Sam) Lewis, donned some fancy purple and black tiger-striped tights while warming up with Atlas racers on her feet. She, too, was wearing her champion jersey from Cable.Tim Hola, the PowerBar sponsor, made his way in a sporty pair of Atlas racers too. And the biggest surprise was Bob Bolton, South Dakota’s master-élite snowshoe racer, popped out of his jeep with DIONs on his feet ready to take on the highest altitude race he had ever run.

The high school teams were big this year. Smoky Hill High School brought up some stud runners, and 2011 runner-up Kyle Ames made it known that this was his race to win this year. His teammates followed his lead and wanted to team snatch the team title out of the grips of Cheyenne Mountain High School’s hands. CMHS have been the state championship team since the event started in 2010, and they were not going to let SHHS take it easily. They came in Force: 21 team members comprised of 3 girls and 18 boys donned their D-12 Team apparel and readied themselves for the showdown. Jeff Bliven and Stan Lambros, of SHHS and CHMS respectively, deserve some sort of snowshoe award for growing this sport among the high school kids. It is blossoming, and it will be even bigger next year.

The race started quickly. Brungardt asked veteran racers Sam and Mitch to lead the runners out so no one got lost, and they quickly followed his instructions. Ames was in the mix too, and Brungardt led the runners up the first climb one-quarter of a mile in. He allowed Mitch and Ames to pass, but they missed a flag and took a zig when they should have zagged. Brungardt quickly redirected them from behind and much to his surprise his long time friend, Sam Lewis, led the boys down the hill and back out to the flat part of the course. An immense sense of pride overwhelmed Brungardt after he picked up a face-planted rookie high school runner out of the powder; then he watched from 25 yards back Sam Lewis, in her third LMT, lead the entire group in the race. He will miss her greatly as she heads northwest to run for the Beavers at Oregon State for the next four years. 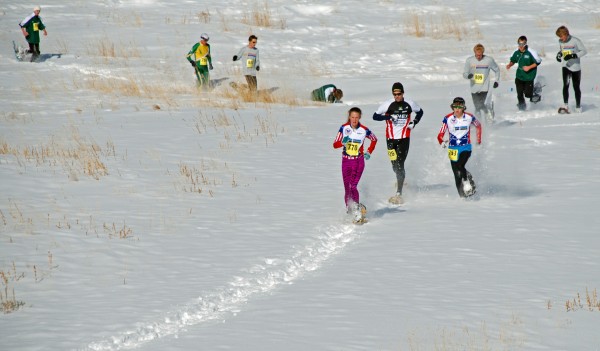 Face Plant: Been there, done that. Helps to have the RD right behind

From here the race developed quickly into a speed event. Sam was eventually passed by Mitch and Tim Hola, but held off a gritty attack by a pair of high school boys: Ames and Josh Fowler of CMHS. Bob Bolton was breathing hard behind them, and Brungardt eventually passed a string of high school racers to be situated in the rear of the leaders. He continued to check course markings, race volunteers, and tested the gel consumption at the aid stations. He was in no hurry to get back into the race, he was just happy he got the whole thing off successfully.

Racers climbed the 300 feet in elevation gain up Highlands Meadows HOA. Sam continued to push the boys up the hills, Brungardt observed her awesome tights from 200 meters back. Mitch was gonzo; he had taken a commanding lead and would not surrender it as he won his first ever 10 km race in snowshoes. Hola finished behind him for second overall, and Bolton was third. The high school race was coming down to the wire. Brungardt watched Sam and the two boys battle down the valley into the willows. He briefly lost them in thick brush, but made out Bolton’s green tights and Sammy’s purple ones for brief moments.

Once clear he really saw the race turn into a match of attrition that pitted Sam Lewis, the fastest girl in snowshoes in the nation, up against two of Colorado’s premier high school distance runners: Ames and Fowler.

It appeared to Brungardt that Ames took off and passed Lewis. Fowler quickly followed suit. It then appeared that Fowler and Ames were neck and neck. Oh how Brungardt wished he was there to watch them battle it out down the stretch! Ames was in his second year as a racer, and this was Fowler’s first time. Ames wanted it too much, and he nudged his way to an 8- second win, followed by Fowler then Lewis, 45 seconds back of Ames.

SHHS did it, they dethroned the CMHS reign of individual champions. The numbers for CMHS were too much in the end however; CMHS stormed home to win the meet by a wide margin.

If someone next to you jumps like this on the start, don’t plan on passing them

Other racers, like Lisa Mills a SHHS coach and former Olympic Trails runner, won the women’s 10 km. Brett Tomlinson, Snowy Peaks Principal in Frisco, won the Best Dressed Elvis Award. Griffin Elementary’s Gina Kelble, a two-year pro of the LMT and a mere 11 years old, qualified for Nationals and looks forward to competing in the Junior B category for the first time.

Racers loved the course so much that they encouraged Brungardt to have it be the National Race course. He thought it over with Mark Elmore, USSSA Sports Director, and with much anticipation the two men decided to make it so, only in reverse (That smacks of a devious Elmore idea; another twist, another challenge in finalizing a world-class layout. ED) . The two are looking forward to the race weekend, February 24-26, as SHS hosts the “Big Show,” and Colorado’s first-ever bid for the snowshoe nationals.

Come one, come all, and behold the beauty of Summit County from this awesome course.

2nd, 4th, Last Photos: courtesy Jim Lewis (Why does that last name seem so familiar in this article?)

Comments, write phillip@ultrasuperior.com and include article title in the subject line, please. Will see you at Frisco! On the trail, look for me trudging up in the rear with the gear as is the Captain’s preference in Kubrick’s movie Full Metal Jacket.