Faber Snowshoes deserve a large round of applause for an innovative re-invention of the snowshoe. The company’s S-series is simply a pleasure to use. It’s a sliding snowshoe that shows the evolution towards skis that’s going to appeal to many people. 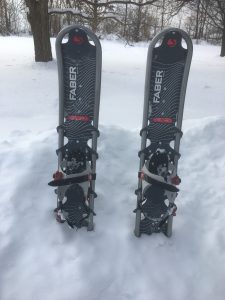 The concept is superficially similar to the Marquette Backcountry Ski series, which I had the chance to try out a few years ago. However, as Michael Faber told me during our discussions about the model, Marquette’s concept was to make a ski more like a snowshoe. Faber has taken its legendary snowshoe expertise and turned it toward building a snowshoe that moves a bit like a cross-country ski, and that’s a huge difference. If you come from a snowshoeing background, chances are good you will find this preferable to the Marquettes.

Although I do a bit of cross-country skiing, snowshoeing had always been my first love when it comes to winter sports. I’m just not coordinated enough to manage skis properly, and my thrashing around on them leaves me quickly winded and tired. Increasingly, though, following a couple of surgeries and medical problems that have affected my hips and pelvis, snowshoeing has become a bit more difficult for me.

I am also difficult to size for snowshoes, as my build is peculiar. I am short and heavy, with even more disproportionately-short legs. My weight requires bigger snowshoes for floatation, which puts added strain on my hips. I’ve spent the last 2.5 months trying out a pair of the S-series, and I’ve been delighted with them because they solve most of those problems.

The S-line are quite narrow for a snowshoe, lessening the demands on my hips. They offer great flotation in powdery, fluffy snow. And once I caught on to the proper semi-gliding stride that requires virtually no lifting, I was even more pleased with how (relatively) effortless they seemed. The lack of lifting, unlike a regular snowshoe, is one of the defining features of the S-line. The motion is not quite a cross-country ski glide but is more of a distant cousin. While researching the S-line, I watched several videos, including one of a man who appeared to be in his 50s or 60s, dashing through the snow and apparently having a grand time. I’m not quite that good on them yet.

One of the most innovative features of the S-line shoes is removable plastic skins. There are nine different combinations possible, from no skins at all to full grip skins on the front and rear of the snowshoes. The skins help add grip when necessary, or to glide and slide when wanted. They are an awesome addition to the S-line, although they do make for a little more work. I’ve tried all the possible combinations, and most often stick with the medium-grip skins, which seem ideal for most conditions.

Another of the videos I watched shows a man using the S-line skis and changing the skins on the go in the field without removing them. I don’t have anywhere near the dexterity and agility to do that, but it would be a helpful skill to master. The S-line shoes also have wings on the mainframe to provide extra grip beyond the skins, and that’s a welcome addition.

I have only minor criticisms of the S-line shoes. The first is the toe-cap on the harnesses, which needs to be enlarged somewhat. If the boots you are using with them have enough of a rocker toe/sole, it’s possible for your toe to pop right over the top of the caps, and that will create quite a problem in deep snow. Otherwise, the ratcheting harness is very simple to use and exceptionally adjustable.

The only other difficulty I encountered came in side-slippage on harder-packed snow. It’s been an extremely variable winter here in Southern Ontario, ranging from two meters of fluffy snow over Christmas to hard, icy snow that’s managed to survive four thaws so far.

Ordinarily, the S-line shoes are extremely stable and comfortable, but several times on hard-pack they slid sideways unexpectedly. That makes me a little dubious as to how they would perform on icier slopes, but no snowshoe works perfectly in every condition. My wife also tried the S-line out on several occasions, and absolutely loved them. Two of her three favourite models of snowshoes (the North Cliff being the other) have been made by Faber. I’m probably going to have to resign myself to having access to these shoes only on a part-time basis.

So, should anyone who likes snowshoes try the S-line? Definitely… and you might find yourself stripping down your snowshoe collection afterwards.