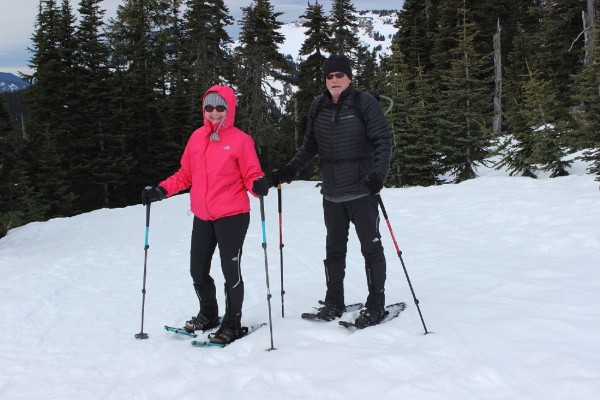 Olympic National Park in Washington is one of the gems of the Pacific Northwest. In addition to great snowshoeing, it is also one of only three national parks to offer ski lift services. There are 58 national parks throughout the U.S., and the National Park Service celebrates its centennial in 2016.

Averaging 400 inches of snow annually at an elevation of 5,242 feet, Hurricane Ridge is Olympic National Park’s alpine playground in winter featuring snowshoeing, cross-country skiing, tubing, and downhill skiing. Located 17 miles south of Port Angeles, Hurricane Ridge is open just three days a week, Friday through Sunday, and Monday holidays from mid-December through the end of March. That truncated schedule is not a deterrent to visitors who can drive from sea level to ski (snowshoe) level in less than 20 minutes from Port Angeles.

Hurricane Ridge Road ends at the visitor center, where you can rent snowshoes, buy food and drinks, and relax in the warming area. And whether inside or outside the visitor center, you’ll be able to appreciate the panoramic views of the Olympic Mountain Range. Those same views are also available at various locations while snowshoeing. 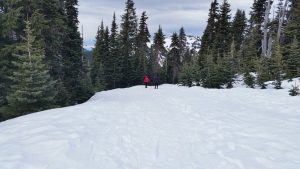 Lots of first-time snowshoers, or those with children, will enjoy the meadows just above the visitor center. This area offers gentle, easy terrain for everyone, and the views are still great! However, because the meadows are exposed to the sun and wind, they can be icy or wind packed. A note about Hurricane Ridge: It got its name for a reason! The winds can howl through here, and change dramatically in a short amount of time.

For those who have never tried snowshoeing, you can sign up for the “Snowshoe with a Ranger” program. Join a park ranger at Hurricane Ridge to experience the wonders of winter on snowshoes. Instructions and snowshoes are provided for the cost of $7 for adults and $3 for kids 6-15 years old. The route is easy to moderate and begins at 2 p.m. at the visitor center. 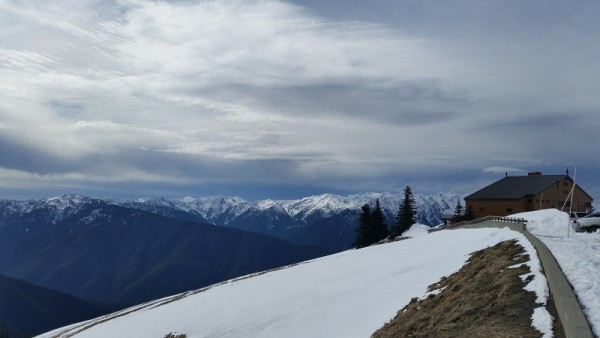 Hurricane Hill Road is a little more challenging and begins just outside the visitor center. This 1.5-mile stretch first descends steeply and then follows the rolling, moderate ridgeline along the unplowed Hurricane Hill Road. Much of this ridgetop trail is sheltered by a subalpine forest, making it a good choice in windy, inclement weather or when there is elevated avalanche hazard. Throughout, you’ll have nice views of the valleys below. At 1.5 miles the road comes to an end in a broad meadow. This makes a good turnaround point for beginners. 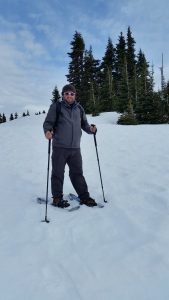 Continuing on, you’ll travel another mile-and-a-half while the route climbs another 700 feet to the eventual summit of Hurricane Hill, which rests at 5,757 feet of elevation. From the summit, take in 360-degree views of the Olympic Mountain Range, Puget Sound, Mount Baker to the north, Glacier Peak, and the Strait of Juan de Fuca.

A quick note about cell phones: If you have roaming turned on, you may incur international charges as Canadian cell towers can easily pick up your roaming signal. My carrier, AT&T, alerted me of that “option” as I was snowshoeing, and taking photos of Vancouver Island.

French restaurant – Walking into C’est Si Bon is like stumbling into a European castle with trimmed gardens bursting with pastel flowers. The French cuisine is to die for. Owned and operated by Norbert and Michéle Juhasz for more than 30 years, C’est Si Bon is like a little French oasis in the middle of the Olympic Peninsula. It’s located on Hwy. 101 in Port Angeles. Michéle has been making gastronomical delights most all of her life, starting out as a private chef for Hollywood stars before moving to the Northwest and founding C’est Si Bon with Norbert.

Visit a winery – One of the original 15 wineries in Washington State (there are nearly 900 today), Olympic Cellars celebrates a heritage of award-winning, hand-crafted wines. Operating out of a 125-year-old historic barn, Olympic Cellars offers samples on its century-old hand-crafted tasting bar; a 100-year-old bell rings in the harvest every fall. All nestled in the foothills of the Olympic Mountains, Olympic Cellars is located on Hwy. 101 in Port Angeles.

Hotels and B&Bs – In the towns of Sequim and Port Angeles, you’ll find decent accommodations, like the Holiday Inn Express and Quality Inn & Suites, to name a few. There are also several quaint and charming B&Bs. The Five SeaSuns in Port Angeles opened in 1996. The only historic bed and breakfast located in the heart of Port Angeles, the Five SeaSuns will transport you back to the simple elegance of the 1920s when the building was constructed. 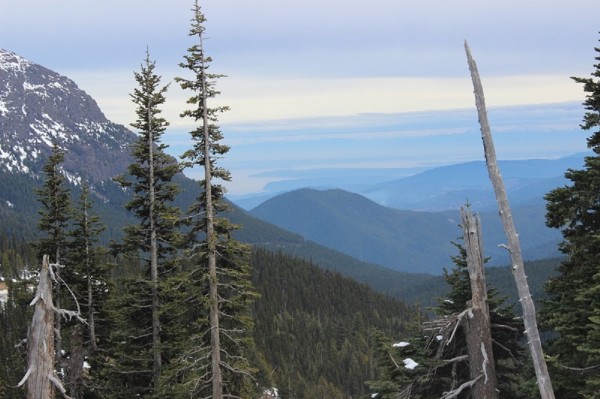 View of Canada from Hurricane Hill.

Last year, Fodor’s Travel Guide selected Colette’s Bed and Breakfast a “Top Choice” for the Olympic Peninsula, describing it as, “A contemporary mansion curving around 10 acres of gorgeous waterfront property, this B&B offers space, service, and luxury equaled by no other property in the area.”

The George Washington Inn is regarded as the finest B&B on the Olympic Peninsula. Built as a replica of George Washington’s mansion, it sits majestically along the Strait of Juan de Fuca with a panorama of the Olympic Mountains. Located in the sunniest spot in Western Washington with easy access to the Olympic National Park and beaches, it has five large rooms with king beds and spa baths for an unforgettable experience as a romantic getaway.

More information about Olympic National Park and Washington’s Olympic Peninsula can be found at Hurricane Ridge or Port Angeles Regional Chamber of Commerce.