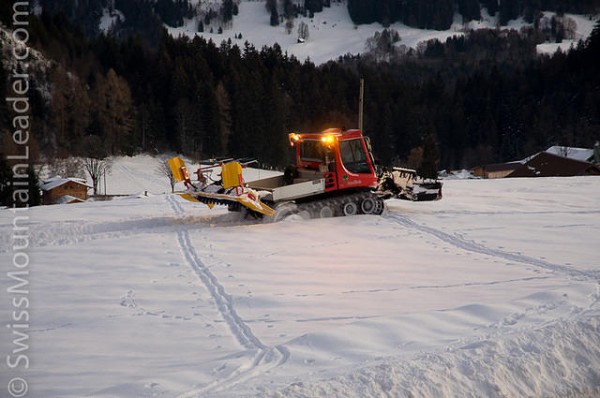 When I’m out guiding groups on snowshoes we often end up talking about snow and how it varies around the mountain. With that in mind I snapped these photos from the balcony of our chalet – in Leysin, Switzerland – around Christmas and a couple days ago.

We’re looking at the meadows where the cross-country track runs below our chalet. In the winter this is all natural snow but it is prepared by machine each night and these photos are of the machine running past the chalet one evening at Christmas. If you’ve not seen one of these machines before, known as piste bashers, then it’s basically a tracked vehicle with a milling cutter and excavator blade at the front with a heavy rubber plate at the rear.

This machine has an extra attachment to add tracks for classic style cross-country skiing, which on this photo have been placed on either side with an area in the middle for skate-style cross-country skiing. We’re pretty lucky here, the track goes right by our door and I’ve usually stamped out a short 10m track of our own to get onto the main trail. In fact, we’re doubly lucky, our cross-country trails are free to use, which is nice.

The rubber plate is bit that gives snow the characteristic ripples or corrugations on the surface. Skiers often assume these ripples are a by-product of the piste preparation but in fact they serve an important purpose. Rather than a flat, smooth surface there’s now a series of small bumps and the surface area of the piste is greater. This means the cold night air cools more snow than if it were flat… and the snow lasts longer.

Of course, the sheer weight of the machine compresses snow which forms much stronger bonds between each individual snow or ice crystal; as a rough rule you can reckon that reducing a snowflake by 10 times will increase the strength of the bonds it forms by about 100 times. The stronger those bonds the more energy it takes to break them–simply put the sun has to pour more heat into the surface to melt it. However, the more solid and hard-packed the surface the more moisture and air are prevented from getting to the ground. This can have an impact on the local environment.

These are images taken a few days ago. You can see the grass coming green again and the little white, or occasionally purple, specks are crocuses. What you can also see is where the track was. What you see is that the grass doesn’t quite recover as quickly and you can clearly see where the piste preparation has taken place as the track is still there.

This is caused by that snow being much denser than the natural fallen snow and not letting air, moisture and even light down to the ground.

You might make out here that there’s been some “muck” spreading. To bring a bit of life back to the grass, we’ll soon see a lush meadow there and the cows will be back.

All of which is quite interesting. It’s telling us there’s limits to how long we can run ski seasons on pasture ground. If we kept working the snow it would smother the meadow and there would be no grazing for the cows or sheep in the summer.

There’s an even bigger impact when snow cannons run as the snow they make is already more dense and more bonded than natural snow. We don’t have snow cannons on the cross-country runs here, but we do have them on the lower ski runs like many ski stations. The two main functions of snow canons are base building in autumn where we get strips of canon snow on a bare mountainside and topping snow levels up to extend the ski season on lower runs.

There are some other bad impacts from snow canons that I should mention. Visitors often assume that the overall effect is fairly neutral. They guess that the rain or snow that falls in the higher elevations fills the reservoirs, and fueling the canons is about the same as if it made the way down the mountain naturally. That’s not really the case and a side effect of snow cannons is dry streams and a loss of water to parts of the mid-mountain environment. And when rain does fall on top of the man-made snow, then it doesn’t reach the ground as well. So, while snow canons are really useful, we need to use them in a more clever and sensitive way.

Which brings me back to one of things about snow we discuss when we’re out snowshoeing: We don’t run snow canons late in the season no matter how cold it is because it kills the pasture. It’s important to get the cows out to pasture so they can produce the cheese for those fondues that skiers enjoy in the winter.

Ian is a UK Mountain Leader and an International Mountain Leader (IML). He runs SwissMountainLeader and in winter he's a snowshoe guide in the Swiss Alps and runs trips from Chalet L'Epicea his own B&B in Leysin