You may have heard the term “Yooper” before, but what exactly does it mean? The Associated Press caption, dated May 19, 2014, reads, “Da Yoopers added to the Merriam-Webster dictionary celebrating residents of Michigan’s Upper Peninsula.” Yes, in April of 2014, Merriam-Webster added: “Yooper – noun: a native or resident of the Upper Peninsula of Michigan – used as a nickname” to their dictionary.

On the Da Yoopers official website, they asked, “What da heck is a Yooper?” The response was that people who live in the Upper Peninsula or the U.P. are called Yoopers and are proud of it. To find Yooperland, look north of the Mackinac Bridge (also pronounced “Mackinaw,” a 5-mile long suspension bridge) that connects the Upper Peninsula to the Lower Peninsula of Michigan, crossing over the Straits of Mackinac. 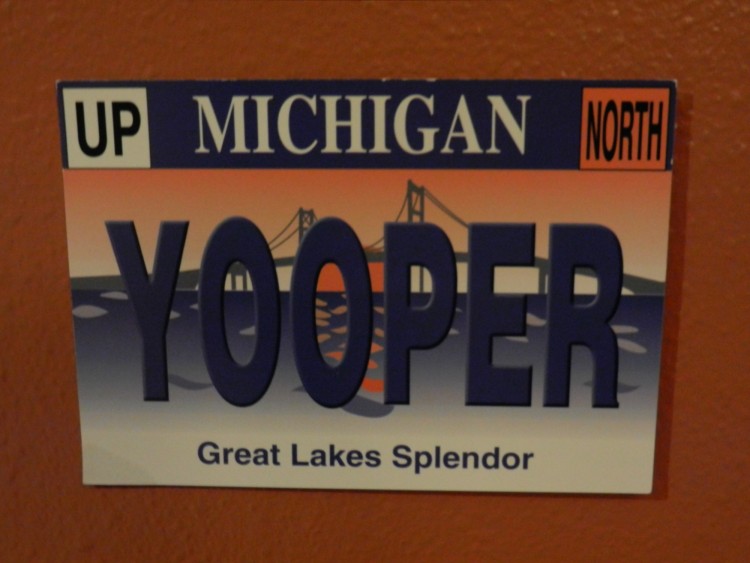 Snowshoe History in the U.P of Michigan

If you go back to the 1800s and before, you will find the Ojibwa tribes of the Great Lakes area (of which I’m a descendant) using snowshoes. The Ojibwa hunters used the snowshoe with a pointed tail and a slightly turned-up pointed nose so that they could slice through the snow-covered brush on their hunt. Coincidentally, today we call those “Ojibwa snowshoes.”

Explorers, trappers, and woodsman of that era also used snowshoes to work their way through the deep Upper Peninsula snow. Later in history, foresters, farmers, and other outdoor workers have used snowshoes too.

In 1954, Clarence Iverson began making traditional snowshoes and created the Iverson Snowshoe Company in Shingleton, located on the border of the Hiawatha National Forest. Iverson used Michigan white ash and rawhide to make his snowshoes. The company exists today and manufactures over a dozen styles of wood-frame snowshoes with rawhide, neoprene, or nylon webbing.

And then began the start and growth of snowshoeing recreation that takes us from around 1980 to the present, where the popularity of snowshoeing continues to grow. In fact, 2020 was a record year for snowshoeing, with sales doubling to an estimated 34 million dollar industry. Today, many Yoopers are using both traditional and modern snowshoes for recreation and sport.

Read More: The Future of Traditional Snowshoes: We Value Our 6,000 Year Tradition 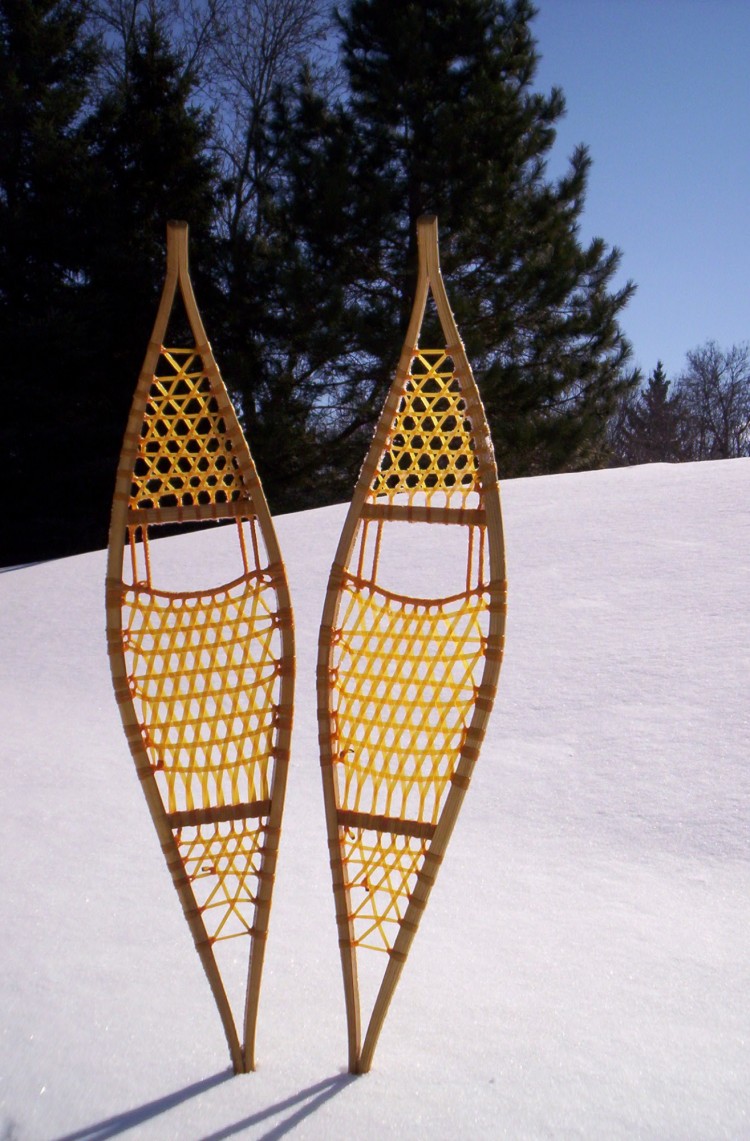 There are many snowshoe trails available in Michigan’s U.P. The areas below are just the tip of the iceberg when talking snowshoe trails in Yooperland. So, let’s explore them!

Specific to the forest is a secluded snowshoe trail located off Federal Highway 13 called Bruno’s Run. Providing a 9-mile (14.5 km) loop, the trail passes through a forest, over rolling hills, and past several lakes. Thus, this trail provides a daylong challenge for the snowshoer. Or, if you prefer, you can snowshoe segments of the trail to experience specific sites or for a shorter trip.

In addition to Bruno’s Run, over a dozen other trail areas in the Hiawatha National Forest are ideal for snowshoeing. 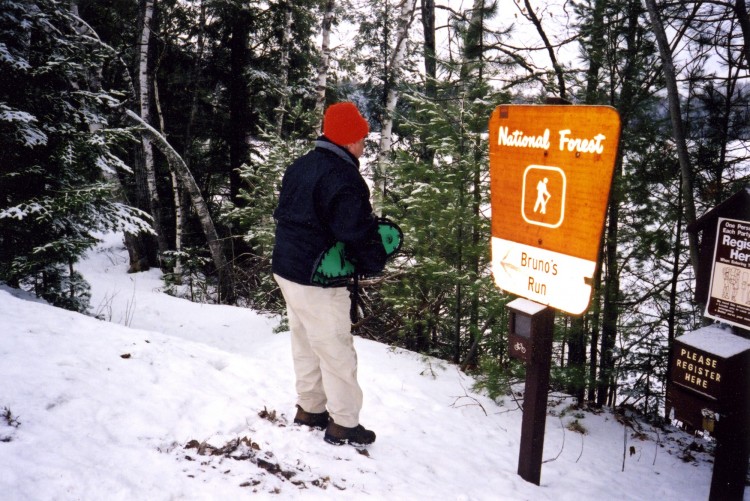 The author has a winter hiking outing on Bruno’s Run in the U.P. Photo: Jim Joque.

Also, in the eastern part of the U.P in Michigan are several designated trails and loop options for snowshoeing in Tahquamenon Falls State Park. The park spans almost 50,000 acres and over 13 miles (21 km).

The Upper and Lower Falls hiking trails provide many miles to explore. For a shorter outing, try the 0.5-mile (0.8 km) Nature Trail, or for a day outing, try the 5.2-mile (8.3 km) Clark Lake Loop. Either way, take the opportunity to see and hear the well-known Tahquamenon Falls, including Upper Falls, one of the largest falls in the eastern U.S., with an almost 50 feet (15 m) drop.

To the west and along Lake Superior is the picturesque Porcupine Mountains Wilderness State Park. The park includes 60,000 acres of an old-growth conifer and hardwood forest, including virgin pine and hemlock.

You can snowshoe 4.3 miles (6.9 km) up the Escarpment Trail for a panoramic view of the 300-acre Lake of the Clouds. Or, explore any of the other two dozen scenic trails that touch along the Carp River and Lake Superior’s shore. 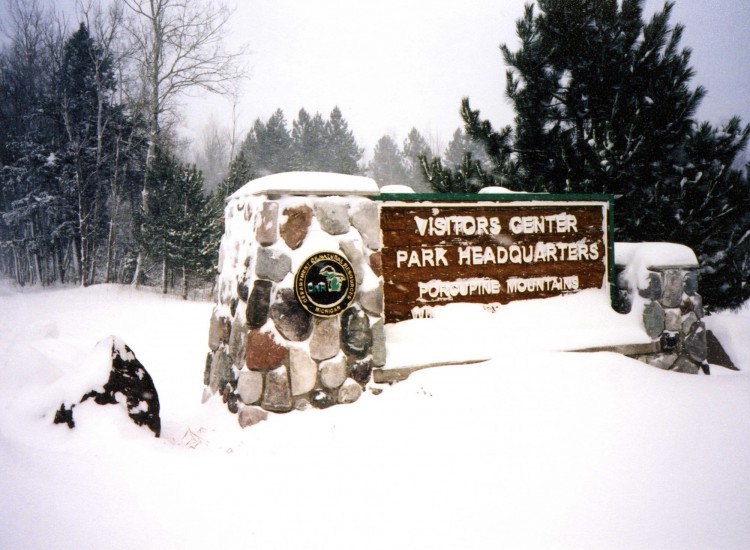 Snow abounds at the entrance to the visitor center in the Porcupine Mountains. Photo: Jim Joque

Further south in the western half of Michigan’s U.P. is the 18,327-acre Sylvania Wilderness & Recreation Area set in the Ottawa National Forest near Watersmeet. Over 26 miles of non-groomed trails for snowshoeing connect to 34 glacial lakes and meanders through an old-growth forest.

Or, for a quick jaunt, try the 0.4-mile (0.6 km) Interpretative Trail at the Ottawa National Forest Visitor Center. You can even rent a pair of snowshoes at the center for free! 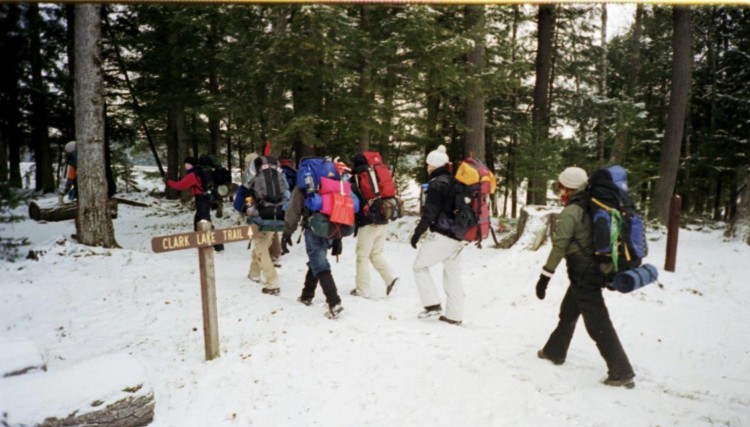 Winter backpacking in Sylvania is always a pleasure but also a challenge. Photo: Jim Joque

Highly popular is the ABR (Active Backwoods Retreats) in Ironwood, Michigan. Although daily passes are required, there is a mix of 10 km of non-groomed trails to snowshoe. On 1100 acres, scenic terrain along the Montreal River Valley combined with bluffs and ridges make for an exciting hike. ABR is also known for its cross-country skiing and skijor trails.

In addition to the plethora of recreational trails for snowshoers, there are also snowshoe racing events!

For example, the Noquemanon Snowshoe Races take place on the Noquamenon Trail near Marquette. The events currently include 5K and 10K. In past years, they also offered a challenging 15K. In addition, the Noquemanon Trail Network hosts a large ski marathon, ski races, and fat bike events for other winter enthusiasts.

The Yooperbeiner Snowshoe Race/Tour offers competitors a 5 km or 10 km race and a kids race. Though it was canceled in 2021, this fun even usually takes place along the Wolverine Ski Trails near Ironwood.

On the other side of the U.P. near Paradise, Michigan, the Tahquamenon Falls 5K and 10K snowshoe racing events typically occur in the scenic Tahquamenon Falls State Park. Unfortunately, due to the pandemic, the most recent race occurred in 2019. 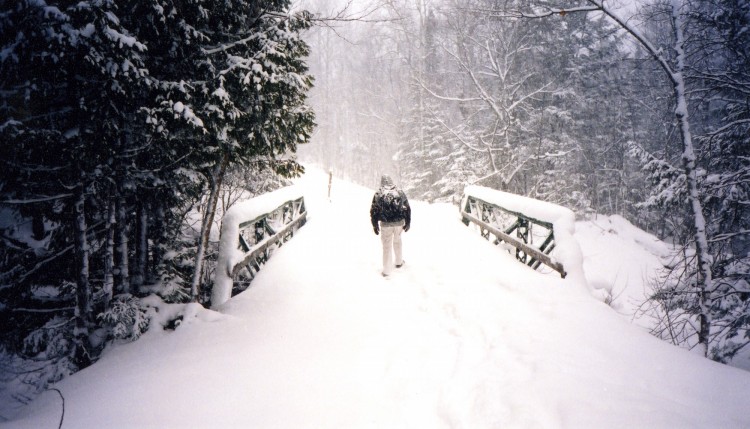 Snowshoe like a Yooper in the U.P of Michigan

Filmed in 2000, Jeff Daniel’s movie Escanaba in da Moonlight was a spoof on U.P. people and customs. Daniel’s character was Reuben Soady, the only one in his family who was a “buckles Yooper.” The story revolves around Reuben’s time with his father, brother, and friend at the Soady deer camp involving an attempt to end his ill fate as a failed hunter. Like his father, Albert (played by the late Harve Presnell) said, “Dat year camp was as tense as a moose’s butt durin’ fly season.” The remainder of this humorous story mimics an exaggerated Yooper dialect and stereotypes Yooper behaviors. The film obviously distorts the definition of a Yooper.

However, Albert Soady’s last words in the movie captured the fine essence of a Yooper when he said, “See, it’s like dis. When I’m sittin’ down to the Sunday supper table, surrounded by Soadys, facin’ all dat food we hunted and gathered ourselves….I’m in heaven. And, if ya wanna go to heaven, it’s north a da bridge.”

Have you gone snowshoeing or completed any snowshoe races in the U.P of Michigan? What other stories do you have about the Yoopers of the U.P? Please share your thoughts with us in the comments below.