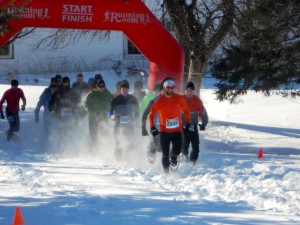 The Friday before the third race in the Dion Eastern Ontario Snowshoe Running Series, Ontario received more than 30 cm of snow in less than 24 hours–quickly making the Westbrook Snowshoe Race easily the hardest race of the series to date.

The race, held on Saturday February 9, had a mix of beginners and a few seasoned racers. The winter storm had some effect on the quantity of racers but all were treated to a crisp, sunny day and a course that we will not soon forget. 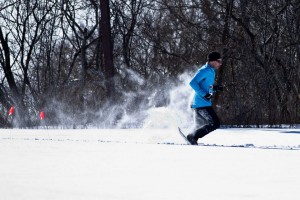 Derrick Spafford and Marco Smits decided that, after the heavy snow fall, they would have to modify the original course; setting a lollipop course so that, at the very least, the participants would have some packed running. The pair did their best the day before (during the storm!) and the morning of the race to keep the course well-marked and moderately packed.

The race itself was a study in determination. I can really only speak for myself but running up front had taking a great deal of effort and I jockeyed for position with second and third place much of the middle 3 km. After we had made our way around the loop and back onto the freshly packed trail to the finishing line, I managed to pass Joe Turner and Corey Turnbull and pull slightly ahead.

In the final 1 km I couldn’t help but look back to see Joe slowly trying to reel me in, but lucky for me the race was only 6 km and not 7. I managed to take the win a meer 20 seconds ahead of Joe in a time of 38:43. Corey Turnbull finished strong for third place overall in a time of 39:38. Gilles Parisien was the top masters, and fourth overall, with a time of 41:12. 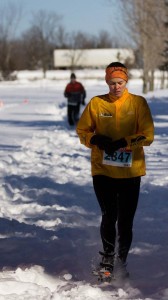 I am relieved to have won the race and enjoyed talking to some of the newer snowshoers. Once again I got a pair of the famous Grandma Rosie’s Socks (hand-made by Derrick Spafford’s mother) and ate the hearty chili made by the wonderful cooks at the Westbrook Golf Course. It was a beautiful day shared in competition and that was the real reward.

Hopefully next year we have as much snow as we did this year, but maybe not get it all at the same time the day before.