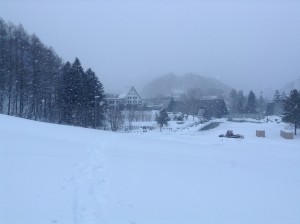 The icy two-lane road toward Otaki is surrounded by woods with an occasional deer browsing on brush poking above the snow level. Countless street signs announced waterfalls, park lands, and many other natural attractions. We passed by mushroom farms, log homes that could have been in Montana, and, oddly, in the middle of nowhere—a ten-meter high dinosaur statue. While passing these sights, I realized that our two-night itinerary for Otaki was much too short. 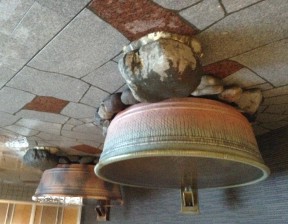 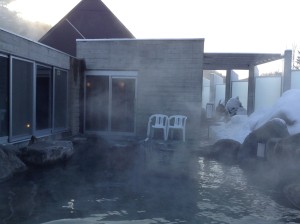 Our accommodation was Horo Horo Sanso, a spacious Japanese hotel on the edge of a valley, whose clear running river has rust colored iron deposits on its bed. Minerals from riverside hot springs flow into nearby streams and then the river. Our hotel had its own hot springs facility, too, an immense pyramidal structure over one hundred meters in length. Soaking in its ten or so indoor and outdoor baths, each one with a different design, is a wonderful après-snowshoe delight. Rooms, including a luxurious dinner and breakfast, are about fifty US dollars per person.

Upon arrival at Horo Horo in the late afternoon, we enquired as to locations for a pre-dinner snowshoe jaunt, and the clerk pointed out numerous locations on a local map. With too many choices and only had a few hours before dark, we just sauntered out the front doors, donned snowshoes, and explored.

A bright red Japanese shrine gate caught our attention, so we wandered over and was surprised to learn that the artistic wooden shrine building is dedicated to dogs. A sign informed us that the area is believed to be a power spot for dogs. 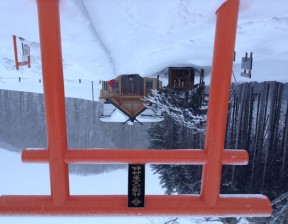 Shrine at Power Spot for Dogs 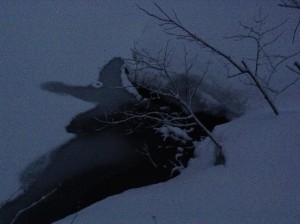 The next morning after a long soak in hot springs, we enjoyed walking more around the mountain near the hotel. The beautiful views lit a fire in us to explore Otaki further. Our next trip was to see the nearby “Petit Niagara” that our hotel clerk had suggested earlier. We followed his directions to the start of a cross country skiing course that was immaculately groomed. Confused as to where to go from there, we asked a skier where the waterfall was. She kindly insisted on guiding us as close as the cross country course went in that direction. She skied for a couple of kilometers while we kept pace on the edge the trail, which was about eighteen kilometers in length. Otaki Town provides free skis and trail use to all visitors. 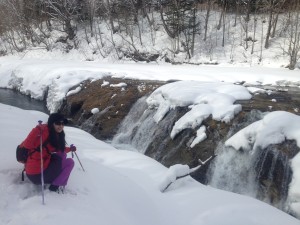 Eventually, she pointed toward the river, and she skied away while we walked between trees on a gently sloping path to the mysterious small Niagara Falls. And they did look like a miniaturized version of the more famous waterfalls, except there were no other visitors, protective handrails, parking spaces, buildings, or unnatural noises. We heard only the splashing of almost frozen water. Icicles and rime frost had formed where the flow was not too strong. The iridescent curves of ice, snow, and creative forces of water mesmerized us.

On the morning of our departure, we pulled over at the nearby Morappu Campground on the banks of Lake Shikotsu to snowshoe and picnic. Three meters or more of snow piled on the side of the parking lot obscured the lake from view. Surmounting the edge of the snow wall, a large blue lake rimmed by high white alpine mountains glimmered. Along the edges, standing up to their waists, a few fishermen were flicking long fishing rods outward. The thick fishing line of one man swayed backward in the blue sky and then flew like a lazy arrow forward into the clear lake. I trekked on powdery snow along the lake edge until I came to an old wooden pier covered with a meter of snow. Walking precariously on the pier, I looked down into the depths and saw round rocks of many blue and brown hues. Due to the astounding clarity of the water, I could not discern how deep it was. 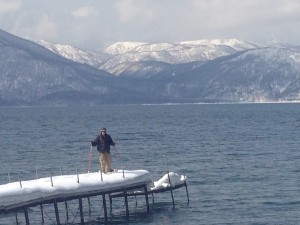 We trekked diagonally up an incline that curved with the shape of the lake and found in the snow copious fresh deer paths, so fresh that I could smell the ammonia-like odor of yellow snow and see chocolate-brown droppings left by at least one deer. One path led to an oval depression at the base of a wind-protected side of a tree. Deer had slept there.

Other animal signs were obvious, too, especially woodpecker homes, more than I had ever seen before. Large mushrooms grew from the base of one tree and above it were several entrances to burrows or nests.

My wife and I peered at a lake vista that was encircled by steep, forested mountains. All white peaks looked down upon us. We brushed the snow off a nearby fallen tree, used it as a bench, and devoured a lunch of croissants, cheese, mixed nuts, bananas, and crisp air. 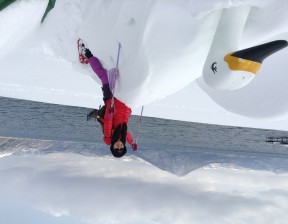 After lunch, we headed directly back toward our car, but we were distracted by a gaggle of swan boats, waiting out the winter. Their comical heads and necks peeked out from the snow as if they were real swans that had snuggled down together during a snowstorm. My wife walked up one on her snowshoes and posed for a photograph. In the photograph, both the swan boat and my wife are smiling by the side of a shimmering alpine lake. When I look at that photograph and others that we took in Otaki Town, I feel a strong urge to revisit where we had been and to explore the other locations that we had no time for. Otaki is one of those rare places where connections to the land are quickly felt.