No matter the span, no matter the race: Whether Tuscobia’s 150, 75 or 35-mile options, running, biking, skiing or snowshoeing like I, time remained on the snow in Northern Wisconsin traipsing those abandoned rail trails where the mind would reverberate, “Hey, you; stop this, drop out. It’s okay, it won’t matter. You’ll feel so much better.” Then add a few personal touches like, “You can watch the football game,” “You’ve got so much to do,” or “The kids are waiting for you at home and …” 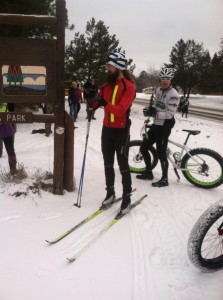 Runners, XC skiers, snow bikes and some snowshoers made up the methods entrants fought to finish their distance (CLICK photos to enlarge; then hit the ‘back’ button at top of your computer to return to the article)

In the reaches of that same mind rests the armor to kick-it, get those escapist thoughts out of one’s head relegating them to the “later” file. This is a compilation of ones I’ve used over the years from others and a few I’ve created. At Tuscobia, I used them all… multiple times.

You should practice saying them out loud. It’s okay; on the trails no one will hear you. Forests don’t give up their secrets; trees don’t talk. If they did massive amounts of bark would have warped off in this race with some of the expletives I shouted out when by myself fighting to finish, nobody near, spicing up my defenses, words I didn’t even know I knew. So here they are, the top ten statements an athlete can employ to battle the mind and finish the distance:

This is only a bad patch; you’ll feel better later, stay at it. Expect them, and when they come, recognize bad patches for what they are: major bumps in your race that can derail one faster than saying “Okay” in Night Ranger’s song “Sister Christian.” You will be at the aid station, quitting the race, and long gone when the realization occurs, I could have made it, I feel better now. Why did I stop? The more aid stations, the more opportunities to quit; be careful aid doesn’t become another way of saying, “All right! A chance to quit!” Tuscobia is marked with few distant aid stations. Make friends with misery as Colonel Kurtz describes in Apocalypse Now. “You must make a friend of horror. Horror and moral terror are your friends. If they are not, then they are enemies to be feared. They are truly enemies.” Come on pain, come on misery, I love you; keep motivating me, you two. 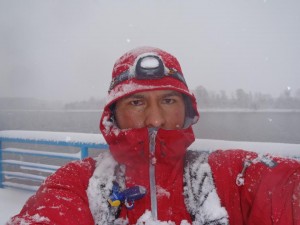 Quitting doesn’t respect the course. Sure, there are legitimate reasons to drop, but I would hazard the vast majority are because of the pain inflicted by the challenge, the reach that is just short of fulfillment, the fingers letting go of the rock’s edge as mentally one tumbles down the north face of desire.

More self-talk:You’re a pansy, there’s no other way to say it; admit it. Give up just like they said you would in high school; another failure, another brick in the wall if Pink Floyd were to be singing it. So, ultra distance person, go ahead, scream this out; see what happens. Watch your will, your fortitude jack up as lips purse and drive continues, all the while…

Making continual forward progress. One more step to the finish, you’re closer. I won’t disclose who this is that told me he wouldn’t stop moving forward to the goal when relieving himself, those were seconds not to be wasted; those were seconds when one just might decide to stop and give up. 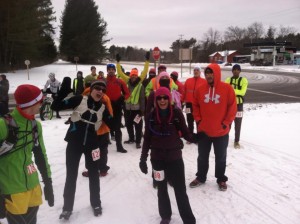 Get your finish, earn it, it’s yours to take, no one else’s. Imagine how it’s going to be once you’re there. See yourself all bubbly and joyful waltzing up to the finish, the crowds cheering. Forget the reality there will probably be only the handlers and that’s it, your bubbly will be the fizzle at the lips when you’re now trying to talk after struggling to make those last miles in. I tried to say to Mia at the Tuscobia finish line, somewhere near midnight, 11 degrees, something about getting a photo. Instead it came out like Kubrick’s “The Shining,” when Nicholson’s Jack Torrance was mumbling as he froze in the wintry maze, “Danny” sounding more like “Danyyaaa.” I’m surprised Mia just didn’t ship me off to the funny farm right then and there. Answering her question about getting something to drink, the sounds that came out would have gotten me arrested if it were the police, as if I had closed the bar. 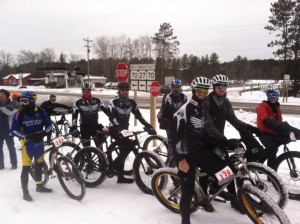 Why didn’t I think of that? Riding a bike. Maybe because they cost $3k-$6k while snowshoes are a few hundred $? Fun watching them pedal by. L to R, Dmitro Voinorovich, then the 5 Title Town Flyers of Marcus Steele, Andy Wegner, Butch Piontek, Kelly Skinkis and Justin Piontek; then in racing red South Dakota’s Tina-Joe Stiller.

Those few moments of feeling better when the pressure of the race is lifted by dropping comes with a cost; pain that won’t repair. All one has to do is call on the cell Helen Lavin, co-race director with fiancée Chris Scotch who is racing the 150-mile on foot out on the course, and tell her where you’re at, please send someone. Her cell number is written on the runner’s number. Instantly your mood will improve, though one may need to disguise it. “I’ll be over by the tree at mile-post 64 on the highway. Yeah, I’m okay, but this ache over here, I better not chance it.” Now I’ve seen truly brave racers drag serious injuries for miles and miles not about to stop until reasoned heads sit them down and give them the gospel that, “You’re done; you’ve spilt enough blood on our dirt for one night.” Get your finish, get your award whether a plaque, shirt or a 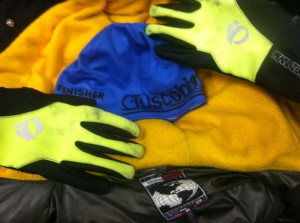 Finishing the race, one will find it difficult to take off their special Tuscobia finisher’s beanie

Beanie like Tuscobia’s. Otherwise every time you see one the ache will reappear, a gift from the devils of the trail that will leave you spinning in the long rope of the wind.

This is one of the top ones: quitting will feel good for a few minutes, but the hurt will last a lifetime. I remember vividly every ultra distance finish I have. Like a movie produced in hell, though, I can recall those I failed like the last second that just passed. One must realize, say, another eight or eighteen hours of this misery, and you’ll be done. Give up now and you’ll have that misery-squared for the remainder of life. Failing to finish gives you an award alright: a miserable memorial smacking your confidence like a tombstone every time you even think about going out to play on the trails. The memory will haunt like the wicked witch flying in the Sonoran desert along side the car of Laura Dern as Nicholas Cage drives them out of the state in David Lynch’s “Wild at Heart.” 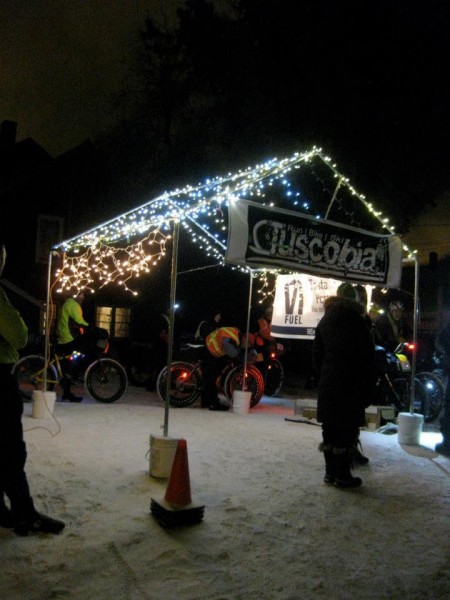 Start/Finish line. This is the start of the 150m bike race. (photo courtesy FB Wild Knits)

Lastly, just go ahead and stop; everybody knows you will. You’ve failed before, why should you start changing things now. Train more next time, you made numerous mistakes already in this race—you went out way too fast, your feet are cold inside those snowshoes—it won’t matter. No one expects you to finish, why should they? Oh, sure you finished (fill in the blank here), but that was easier than this. “This is crazy, it’s beyond my ability. I never was cut out for this. Who cares about a reputation; nobody’ll remember a thing about me, I’m insignificant.” Get a grip! Master of trails, Donald Clark, spoke true words on my first 50-mile trail finish on the Superior trails, “We want you to finish.” Everyone involved is on your side; they’re happiest when you’re crossing the finish, breaking tape. Scream it out, “The heck with this, I’m finishing this race mistakes and all. Get outta my way, Quitter, get outta my way.”

Here’s a bonus that just may be the clincher, the famous No. 9 fanning out around you like an ultra perfume. Take it from Metallica whose idea of hard rock is now mainstream, but the title of this one song gives life to those where a little tip scores a finish. Use their song from their 1991 Black Album “Nothing Else Matters.” Nothing is as important as the finish, clear your mind and set this singular purpose. Nothing else matters could just be the real deal allowing one to escape the doom of obligations. Adapting one of their lyrics, sever the mental calendar clean of any binding ties standing in the way of your finish. At any time when a random thought fills the head offering you an excuse to quit, scream out loud or in your head, “Nothing else matters; nothing.”

The mental pain in an endurance episode will remind one, in graphic ways at times, that you are alive. There are friends I have who are now gone, having never ever considered such crazy thoughts as these ultra-distances, who would now give anything they had in life just to be able to be right here on the frozen tundra bouncing along like me with only my Energizer Ultimate headlight, nicknamed “Tinker Bell” as my friend (the light bounces around out in front like Peter Pan’s Tinker Bell; see? getting wacky on the trail). There are friends who are hobbled or hurt in some way that doesn’t allow them the choice just to consider being this wacky on cold trails on a random weekend night. “Sad But True,” sang Metallica. We’re a very lucky, fortunate bunch. 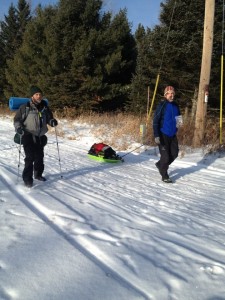 Co-RD Chris Scotch (R) and Nathan Jackson demonstrate 2 ways to carry the required load with 3 hours to go before finishing. The sled is most popular (photo courtesy FB Helen Lavin)

Will these ten guarantee you a finish? Not every time, but they can surely improve your odds. Meld them in your own voice, change them as you may, but utilize them. In this sport of distance, tiny improvements can tip a finish or award your way. The trick is not giving up, a sentence that seems so lame in the comfort and warmth inside, but whose meaning is the respect you earned within, a feeling that makes those life challenges, say in business, seem more like just another mile to finish.