All points lead to the new North Central Region qualifier, the Treehaven Tromp with mileage about 200 miles or more from major population destinations like Rockford, west of Chicago, Minneapolis, Milwaukee and Madison. The 1400-acre park is a natural resource and education center owned and operated by the University of Wisconsin-Stevens Point. 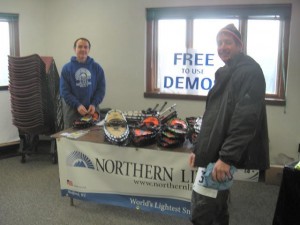 Some enjoyed the park so much they actually shoed an extra one-and-a-half kilometer though not intentionally. And not only was there no extra cost to go longer, those who toured the extra off-course terrain received a $10 certificate as a token respecting the race and recognizing the effort by the racers.

Jim McDonell who heads up the Braveheart Snowshoe Race Series in the region responded, “I told people we got more race for our dollars.” The major awards were laser-printed slices of birch while age-class winners received a paper souvenir certificate.

John Huesinkveld, race director, put in the effort to make his race go off well; “He had consulted me numerous times in the last six months,” recalled McDonell. “It is always hard unless you have several runners try the course first to give feedback.” 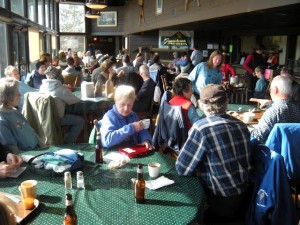 Friday night, McDonell gave a slide presentation at the center on his bike trip around Lake Superior with Joe Pettorini.

McDonell added, “The course was very pretty with a mix of single-track and open areas with some good hills thrown in. One big loop for the 10 km competition; that is always nice.” The temperatures ranged toward zero at the start.

The 10 km course was marked with green flags beyond the intersections and red flags to stop, it is the wrong direction. The 5 km loop was marked in blue.

Lisa Trainor, overall women’s champion completing her fifth race of the Braveheart Snowshoe Schedule noted, “The course for the 10 km was awesome. I loved its challenge, the single-track and the beauty of the course. The water stops were placed perfectly. I can tell you that this was one of my best snowshoe experiences.” 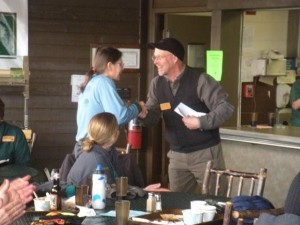 Lisa Trainor finishes her fifth Braveheart Race of the season, capping it off with a win

These classes of racers in the hotbed of Wisconsin snowshoe racing take the competition seriously. One can’t fault them for that; in fact, it’s an admirable trait. This is one race to be at in 2013 so a race for all of the marbles can be run, and we’ll see who wins.

This year Jeffrey Quednow was awarded the win, Kris Borchardt and Mike Quednow credited with the silver and bronze placements respectively.

In the companion 5 km, look at this: Bonnie Nutt won overall while Julin Dodd scooted across the line for a women’s one-two finish. Russ Blennert managed to keep it from a one-two-three as he led Patty Thiede by two seconds and captured first male to boot.

Wrote phillip@ultrasuperior.com  and please include the article’s title in the subject line.