I knew I’d made a grave mistake by about midnight. Outfitted in a Parks Canada oTENTik tent (a cross between a cabin and a tent, complete with a raised floor) during an unseasonably warm February, I found myself atop my sleeping bag with the window wide open at my head, sweating profusely. My fear of becoming cold during my first night in Mauricie National Park outweighed my reasoning for just how warm one can get, even while winter camping. By the middle of the night when I awoke out of my half slumber, my body was yearning for the cold. Lesson to be learned here — don’t put too many logs on the fire. oTENTik’s, beyond having everything you could ever need while camping, keep you cozy and very warm. 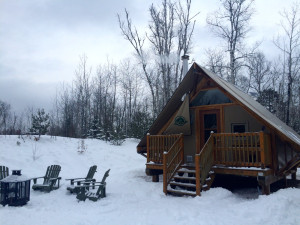 Funny enough, the heat would become a running theme for my time spent in the park. As a prairie girl used to pretty extreme cold, I had been conscious to pack light, bringing along several layers (I may or may not have had experience in overheating during winter activities). Though unlike home this year, Mauricie had a good amount of snow painting a welcoming winter scene. However as I’d learn, the daytime plus temperatures would consistently require layers of clothing to be peeled off.

During the summer months, the park offers 14 hiking trails and by winter, 8 of those are still available. A huge draw for cross country skiers with 80 kms marked and groomed trails for classic and freestyle cross-country skiing, the park also has a number of trails specially prepped for ski skating. 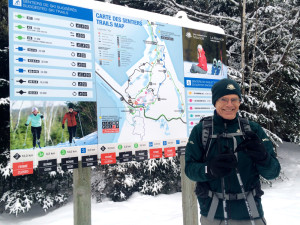 Hovering between 0 and 3 degrees the first day in, me, along with a group of other journalists and a guide, took on a groomed 5 km beginner cross-country ski trail. A newbie (read: first timer), it took me awhile to get the monotonous motion right. Here’s the thing: I try hard. As a former high-level athlete, I like to be good at new activities and sports off the hop. But boy, I had my work cut out for me.

This beginner trail, which perhaps should have been a more peaceful activity (at one point it took as alongside a lovely flowing river which I barely glanced at because I had to concentrate so hard), had me working and challenging myself the entire time.

A few hills along the way even had me questioning my ability not to get hurt. With my teeth clenched and my form tight, I sped down them like an arrow toward a target, all the while hoping I didn’t crash and burn. Lucky for me, I made it. I fell a few times at first, but once I trusted my body a bit more, it got a whole lot easier. By the time our group had circled back I finally gotten the hang of it, though admittedly I was drenched and my body fatigued. I’m not going to lie, I felt accomplished, even if it was just a beginner trail. 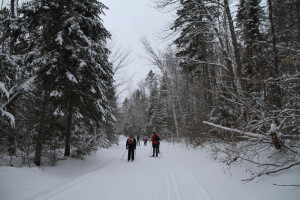 Legs akin to a sailor’s, I hobbled out of my fastened skis immediately ditching my light jacket, marveling at just how spent I was. No time for me to recoup however, as up next was the chance to try fat biking.

Though I had fat biked a few times before, I couldn’t resist the appeal of biking through a forested trail no matter how tired I was. I soon learned that perhaps it wasn’t the best choice. Mere meters down the thin, heavily wooded and very softly padded trail, the first of multiple falls occurred. I wasn’t the only one to crash at the first curve (or the second). Several other large dents in the snow complete with bike imprints, said otherwise. The hardest thing about fat biking when the snow is that soft is getting started again. Thrilled by the challenge of making it work, I kept on. My face flush and legs trembling, I got up and attempted to get going again and again. This cycle of utter hilarity ensued for another 20 minutes or so until I finally threw in the towel. I knew I needed my legs for the next day of this very packed winter adventure.

By the time I woke up on day two, boiling hot from my sweaty oTENTik stay, I was ready to dive head first into a snow bank. I donned a layer less than the day before, as we’d be out for at least 4-5 hours. The agenda for the morning was a 2-3 hour alpine hike with snow shoeing and tagging, and it had me raring to go. 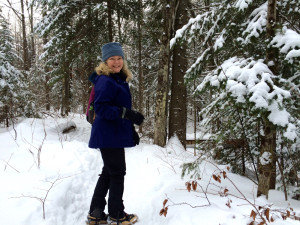 Another new to me activity, snow tagging can be thought of as mixing snowshoeing with art. It consists of working together with a small team (2-5 people) equipped with compasses, a drawing, and using snowshoes as tools for snow art creations done on a frozen lake bed.

By following a pre-determined pattern, teams use snowshoe footprints based on following compass points to create the design. They dutifully follow one another for a number of steps and back again. The activity usually takes about an hour or two depending on the size of the group and the actual design.

The self-guided activity is booked through Parks Canada and reservations are required. (Snowshoe rentals are also available for rent – $12). Conditions on the lake must be opportune in order for the outing to occur. Our group was fortunate that day. Not only was there fresh snow fall on the lake, we were led by staff from Parks Canada who walked us through the activity, allowing me to breathe a huge sigh of relief. I’ve never considered myself an expert compass reader. But before that could happen, the hike to Lac Solitaire had to occur.

Nearly a straight incline for the first 2 km, the demanding hike had me ridiculously hot once again. I was literally wishing for shorts. Equipped with crampons in order to navigate slick inclines, it was a beautiful, yet overcast day for the 5.5 km hike. The loops at Lac Solitaire offer three trails, all which lead hikers to the lake (also 8.3 and 13.1 km trails).

Enjoying the sounds of birds flitting in and around the conifers and hardwoods surrounding us, I enjoyed each short descent as we neared in on the lake; my legs never quit reminding me of the hardships they’d endured the day prior. Before arriving at Lac Solitaire, we took in two vantage points along the way, allowing for quick breaks. The first stop provided a sprawling view of St. Maurice River, and the second gave us a bird’s eye view of Lac Solitaire below, the space we would be snow tagging on. 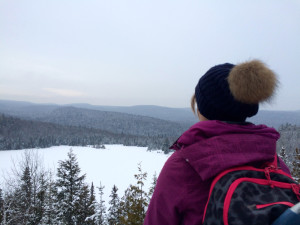 Using ropes tied into the side of the hill we descended with trepidation, as it was easily an equally steep decline to the frozen lakebed. Once on flat ground, we traded in our crampons for snowshoes and received a quick run down on how to snow tag before making our way out to a more open area of the ice. 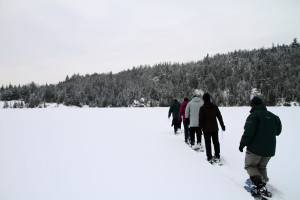 Split in two groups, we headed out to start working on our design, a spider and spider web. My group was responsible for the web. Easily daunted by the compass and fearful I’ll be the one to mess up the design; I quickly learned it’s really quite a straightforward process (once you learn how to properly hold/read a compass). 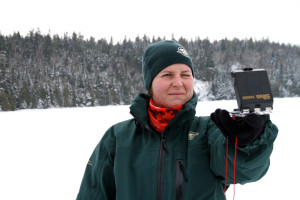 We started by creating the vertical lines of the web at varying degrees; taking 40 or so steps forward, then carefully turning around and following our steps back. We took turns leading and following until all the lines were completed. 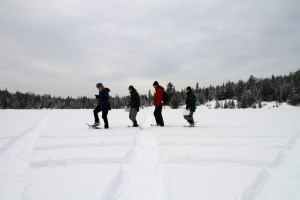 A more liberal and organic approach was taken with the horizontal curves, as our confidence level slightly rose throughout the activity. Our team made pretty quick work of the web, even adding in a few caught flies via snow angel designs, into our piece of snow art.

The other team who completed the spider portion joined us and eager to see our hard work in completion, we headed back up the hill to the second vantage point to take a look. The ascent back to the look out felt slightly better after being able to stretch our legs on the lake snowshoeing. Glaring down at our large-scale design we made, briefly brought out my inner snow Picasso, and it made me sure of one thing – it won’t be the last time I give snow tagging a go. 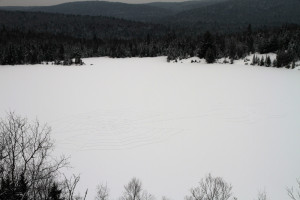 Other can’t miss activities in the Mauricie region:

Sacacomie Hotel overlooks 42 kms of shoreline and is an absolute must visit destination if you are in the Mauricie region. Not only is it a lovely and rustic hotel nestled in the heart of a forest offering beautiful views, it comes complete with an onsite ecologically efficient indoor/outdoor spa, an ice bar, an incredible restaurant chock full of local bounty and European delicacies, and a whole host of packages and activities that can be booked from the hotel. A few of these include:

• Learn to drift and master ice driving in a Porsche Boxster on a frozen lake circuit with Ice Driving Canada. 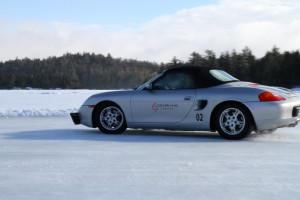 • Mush your own team of sled dogs through forest trails and across Sacacomie lake. 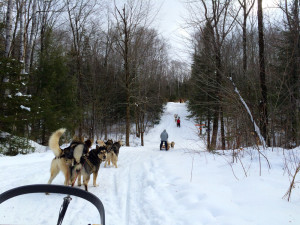 Get your mush on!
Photo Jenn Smith Nelson

• Get outfitted from head to toe, hop on a Bombardier snowmobile and zip through the breathtaking winter scenery found in the Mauricie forest. 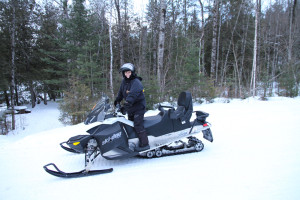 • Woodsman Hike with a local guide and trapper learning about flora and fauna (and enjoy storytelling at its finest), and finish with sipping a glass of Caribou and devouring trout cooked over an open wood fire. 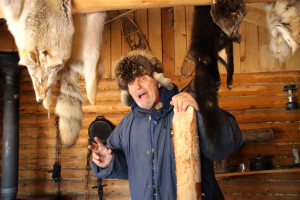 Skate in an enchanted forest (1 hour and 10 minute drive from Sacacomie)
• Before you head home, skate a loop or two in the completely charming enchanted forest, The Domaine de la Forêt Perdue, where 12 km of icy trails await. 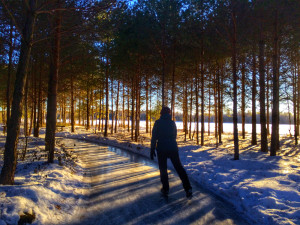