The land of sushi and sumo is not the first place that comes to mind when you think of snow, yet this mountainous Asian country gets buried in the white stuff every year. Last winter (05/06) saw record breaking snow storms in west Japan, unknown for 25 years, derailing trains and delaying planes, but putting a big smile on the faces of winter sports fans across the nation.

As in the rest of the Northern Hemisphere, Japan’s winter season runs from December to March, when much of the country is under a white blanket. Honshu, the main island, lies directly in the path of cold Siberian air streams, which collect moisture as they sweep over the Sea of Japan. When these hit Japan’s mountain ranges, they release their almighty load all in a big way. The result: a country that receives one of the highest snowfalls in the world.

As a keen snowboarder, I had previously only used snowshoes as a means to excess backcountry terrain, but finding myself living in Ono, Fukui, a place that received more snow in 24 hours than my native England does in 24 years, I was keen to make use of the winter wonderland that surrounded me.

Pick up any ski or snowboard magazine and read an article about Japan and the one thing they all shout about is the huge volume of snow, or yuki (as it is know in the native tounge) that Japan receives. Well, I lived and breathed Japanese snow for two years and can confirm that the Nippon does indeed received incredible, unbelievable and unforgettable amounts of the white stuff. 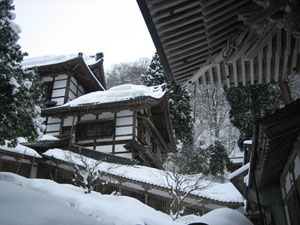 During my time in Japan, I witnessed buried cars, submerged trees and thunder snow storms that raged for eight days straight. Sheets of snow, falling so thick and fast, that you couldn’t help inhaling flakes. Huge snow banks that dwarfed cars and such great volumes of yuki that houses were crushed under its very weight. The locals said it was like a winter of old, and it’s certainly likely to remain the heaviest winter I’ll ever have the pleasure of being part of.

The beauty of all this snow is that with a pair of snowshoes, you are free to roam land, which is off limits outside of the winter months. You see, although much of the rural Japan’s landscape is green, it’s green with rice paddies, which though beautiful when ripe and lush – are strictly of a ‘look but don’t touch’ nature. Japanese rich farmers would not take kindly to hikers bushwhacking through their precious crop.

But when the snow arrives, suddenly miles and miles of ground is opened up to snowshoers. I took full advantage of this, and upon finishing work at the local junior high school, I would often grab my snowshoes and trek across the beautiful rice paddy landscape, around ancient wooden shrines and temples, and up into the densely wooded mountains.

One of my favourite places for snow shoeing was down by the Kuzuryu River. It was a place very fond to me, and I visited in all seasons. In summer, I would dive under the surface of the cool clear water to momentarily escape the heavy humid air above. In autumn I would camp by its side, watch the fireflies’ throbbing glow in the trees and drink nihonshu (rice wine) with friends by a crackling campfire, and in spring I would go for hanami (flower viewing) of the bright sakura (cherry blossoms) that edged the banks.

So, it was with great pleasure that I witnessed this beautiful area in its winter outfit. First trekking over the snow covered paddies that belonged to the quaint village nearby, we would enter the thick bamboo grove that hid the river from view before emerging on the white banks, the rocks and pebbles adorned with soft pillows on snow.

The first time you see a bamboo tree covered in snow, there is almost a short circuit in the brain. To the uneducated Westerner, these two things just don’t seem to belong together. However, Japan’s distinct seasonal climate is such that the hot humid summers support these lush tropical plants, which are then buried in the heavy winter snow.

Surprisingly, in the area I lived at least, I saw very few other snowshoers outside of ski resort trails and backcountry ski hikes. It seem strange to me that there was so much perfect terrain on offer, yet so few people who made use of it.

However, the Japanese do have a long history of snowshoeing, and are proud of their traditional snowshoes called kanjiki, which are made from bent bamboo. Though crude, they are extremely light and manoeuvrable, as I had the pleasure of discovering during one backcountry snowboarding trip with a local climbing legend and bar owner – Yasu. 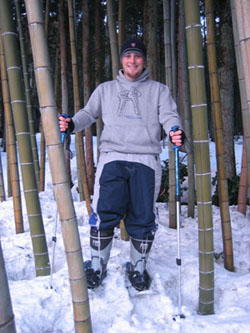 Keen to try the native snowshoes, I borrowed a pair of kanjiki from Yasu, whilst my American friend strapped into his modern, brand spanking new titanium alloys. He clicked his boots into place with precision ratchets, whilst I fastened my shoes on with an old piece of rope.

The advantages of the kanjiki quickly became apparent once we entered a tightly wooded and steep section of the hike. The western snowshoes were simply too big and bulky for the terrain, which resulted in the American taking many falls and at one point the temporary loss of a shoe. For me and our guide Yasu however, the simple kanjiki allowed us to navigate the birch and beech with ease, and we chuckled to ourselves as we sat at the top of the face, chomping on strips of breaded horse, waiting for our friends to catch us up.

It was through my many unusual snowy experiences in Japan, that I was inspired to set up SnowSphere Magazine, a publication that blends snow sports with travel and covers unusual, ‘off the beaten piste’ snow destinations, from India to Iran.

Japan is often thought of as an expensive country but this reputation is not always deserved. Snowshoes can be rented from ski resorts and cross country trails for just a few dollars a day. The cost of public transport can sting a little, but you get what you pay for: a clean, quick, efficient system and it’s worth riding the Bullet Train, which is the world’s fastest, for the experience alone! The other common misconception about Japan is that it is a crowded nation, yet in my experience, trails were never busy.

Navigating your way around streets and stations in a world of Japanese katakana and kanji may sound daunting, but most ticket machines have an English option, and signs are normally written in English too. Of course, it pays to have a Japanese phrase book with you, and the locals will appreciate any efforts you make to communicate in their own language.

Accommodation is plentiful and easy to find in cities and resort areas, with western style hotels commonplace. However, for the more adventurous, the Ryokan is the perfect way of sampling a little local culture. From around $50 per person per night, these comfortable traditional Japanese style inns come complete with straw tatami mats instead of carpets, and futons that replace beds. Take your shoes off at the sliding door, don the house slippers, and slip into a yukuta (Japanese bath robe) whilst you wander the wooden halls and take in the homely atmosphere.

You may have heard that the Japanese are a shy, reserved people, which is true to some extent. However, you will be treated with genuine kindness and hospitality, especially once you get out of the big cities to the more remote areas. As one of the most homogenous countries on the planet, foreigners are generally viewed with great curiosity, especially outside of the well worn tourist zones.

Uttering a simple “Konichiwa!” (Good Day!) or displaying your proficiency with chop sticks is often viewed with jaw dropping amazement by the locals. Though English is not widely spoken, all Japanese take six years of compulsory classes at school, so most will know a few words. Many, especially the younger generations, will be keen to test their language skills on you, as they rarely get a chance to do so on a real live foreigner, so you can often find yourself the centre of attention, which normally works in your favour. 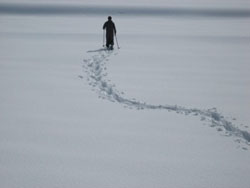 The Japanese love to drink, and the availability of beer, nihonshu (rice wine) and shouchu (a spirit made from rice or sugar cane) in vending machines in ski resorts, and even the streets is testament to this. There are plenty of bars and clubs to get friendly with the locals and once the alcohol starts flowing, the Japanese lose all trace of their stereotypical shyness, so don’t be surprised if you’re quizzed on your more private matters!

Eating out in Japan is not always for the unadventurous, as many of the things making it onto your plate might not be considered fit for consumption in America! Crunching through deep fried whole crabs (including shell and legs), black bear curry, and strong smelling fermented soy beans called natto are amongst the more bizarre culinary offerings, yet there is more to great Japanese food than sushi.

Katsudon, a fried pork cutlet in a tasty barbeque type sauce, okonomiyaki, a healthy omelette style dish, and nabae, a stew containing fish, meat, tofu, mushrooms and vegetables that you cook yourself at the table, are not only delicious and filling, they’re also cheap, with a set meal costing less than $10.

A visit to Japan is not complete without a dip in one of the hundreds of indoor and outdoor communal hot springs known as onsen. With so much geothermal activity, onsen are everywhere and many ski resorts and hotels have them on site. This is the perfect way to relax those aching muscles after a day on your snowshoes. These are almost all single sex affairs as it is onsen law to bathe in your birthday suit. The standard procedure is to shower down first, grab a small ‘modesty towel’ and then take a dip in the tub.

A smooth entry into the steaming waters is what you’re aiming for, the fewer ripples created, the better. Guys, don’t be alarmed by wandering eyes, they’re just checking to see whether the rumours about western men is true!

For those that have a tattoo, a word of warning: in Japan, ink under the skin is generally frowned upon by the older generation. This is because until recently tattoos were the trade mark of Japan’s infamous Mafia, the Yakuza. Many onsens, gyms, and swimming pools do not allow those with tattoos to enter, and some even display signs to this effect.

Aside from the snowshoeing, Japan has much to offer the visitor, from magnificent ancient temples, to the neon bustle of the cities complete with karaoke bars and love hotels. Even the humble supermarket with its octopus tentacles, pig intestines and unidentifiable vegetables, becomes a tourist attraction for the wide eyed westerner, so it’s worth taking a few days off from the snowshoes to lap up a little eastern promise.

So, if you want to snowshoe somewhere off the beaten trail, see a country which is wildly different from the west, which offers some beautiful scenery and most importantly, visit a country that sells beer from vending machines, why not combine your snowshoeing with some sumo and sushi next season?

Sam Baldwin lived in Ono, Fukui, Japan for two years, and is the editor of SnowSphere Ski and Snowboard Magazine (www.snowsphere.com), an online publication that blends travel with snow sports. 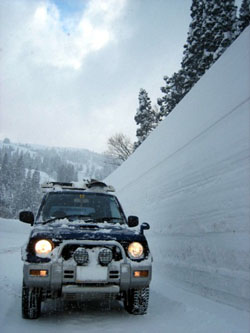