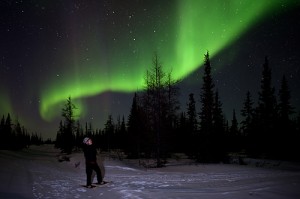 “Oh, it was wild and weird and wan, and ever in camp o’nights
We would watch and watch the silver dance of the mystic Northern Lights.
And soft they danced from the Polar sky and swept in primrose haze;
And swift they pranced with their silver feet, and pierced with a blinding blaze.”
– Robert Service, excerpt from “The Ballad of the Northern Lights”

Robert Service, Jack London, Farley Mowat … as a child, I was transfixed by the vivid writings of these great chroniclers of the North. Their tall tales of a harsh yet mystical land made me yearn to explore Canada’s north and experience its wonder for myself. Fast forward many years and imagine my excitement as I find myself on a plane to Churchill, Manitoba, intent on finally getting to snowshoe beneath those captivating northern lights, the mysterious Aurora Borealis!

There are just seven people on my flight from Winnipeg to Churchill … seven! Admittedly, this is the quiet season, but still, I begin to wonder what I have gotten myself into. I glimpse out the plane window to a vast wilderness of lakes and rivers with scarcely a sign of human habitation. Has Robert Service, the bard of the North, lied to me? Will I feel the magic of the land, the people, and the wildlife of Churchill? Will I watch the silver dance of the northern lights? Or will I simply be lonely and cold?

I’m met at the airport by long-time Churchill residents Mike and Doreen Macri, owners of Sea North Tours. Mike and Doreen are clearly passionate about the sub-Arctic and possess an intimate knowledge of the land, wildlife, and local history. Sea North Tours is equipped to offer visitors a range of experiences in all seasons, from floe ice tours to bird watching to kayaking and even snorkeling with beluga whales. And of course … snowshoeing. 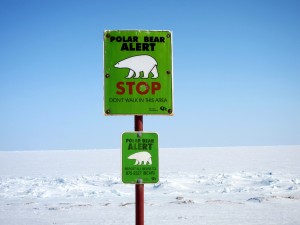 An initial stroll through town reveals an interesting glimpse of life in a remote northern community. Churchill, population approximately 1000, is located on the western shore of Hudson Bay at the mouth of the Churchill River. The resident polar bears have created a significant tourist industry during the fall months when they are on land waiting for the sea ice to freeze. I see rows of tundra buggies parked in town, those clever vehicles that allow human visitors to safely view the bears each season.

The Town Centre Complex houses healthcare, library, and other community services under one roof while the Northern is Churchill’s largest store, stocking everything from food (slight sticker shock!) to furniture to ATV’s. As I walk around town, an impressive range of artisan shops compete for my attention. Best of all, I soon find myself losing my heart to the open and friendly people of Churchill. I wander into a restaurant for lunch and someone I just met joins me to share her stories and enthusiasm for the area. I phone the airport to confirm flight times and the phone is answered by a friendly employee rather than a recording. 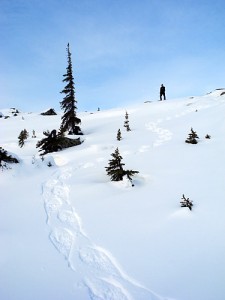 Mike, Doreen and I travel west across the frozen Churchill River. As we leave town, I carefully negotiate the bumpy ice hummocks close to the shores of the river. Farther out where the ice is smoother, I relax and take in the magnificent white landscape stretching to the horizon in every direction. I’m excited to catch my first glimpse of Hudson Bay to the north, while a low ridge greets us on the far side of the Churchill River. I take in the big uninterrupted sky overhead and the stunted trees that struggle to exist in this cold environment.

The town becomes a small speck as we travel farther away from the settled area. Mike and Doreen have built a rustic cabin on the Churchill West Peninsula that would be the envy of any wilderness lover. Set in boreal forest and with a second story glassed-in sunroom, this is the base from which we will set out on our snowshoe excursions.

Mike has been snowshoeing this area for 40 years, favouring traditional wooden snowshoes which are well suited to the flat terrain here. He was initiated to snowshoeing by a childhood friend, an Inuit boy. The two boys set rabbit snares together, running from one snare to another on their snowshoes.

As we strap on our own snowshoes, Mike coaches me about polar bear safety. Although most of the bears are out on the sea ice this time of year, the possibility of a bear encounter always exists. In fact Mike discovered the tracks of a mother and cub just one week ago. My safety briefing includes instructions on the use of bear spray and an explanation of what I should do if I encounter a polar bear. I will not be snowshoeing on my own, but will always be accompanied by Mike who carries bear spray and a rifle to scare bears. Like all of the buildings in and around Churchill, the cabin is fortified against trespassing polar bears with multiple locks and metal bands crisscrossing doors and windows. 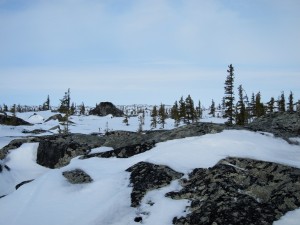 It takes just a few minutes to get used to the long tail and slightly upturned tip of the traditional snowshoes, which do indeed work beautifully in this environment. We travel through a silent, snowy landscape that transitions from one ecosystem to another. Starting in boreal forest, we soon move to taiga which is characterized by lower, less dense trees. Tundra is completely treeless, as is the barren precambrian rocky ridge we climb onto for expansive views of our frozen surroundings. Finally, we snowshoe onto the sea ice for our fifth ecosystem. 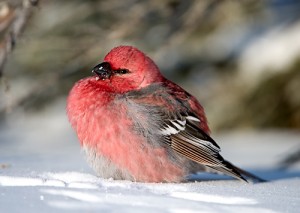 Churchill’s weather is mercifully warm, but as dusk approaches I find myself glancing nervously at the cloudy skies and wondering if the northern lights will make an appearance. I’m overnighting at Mike and Doreen’s cabin where the darkness will make viewing of the Aurora Borealis optimal.

I have always been intrigued by the northern lights, a natural light display that shows itself mainly in regions of high latitude. I admit to being much more fascinated with the legends surrounding the lights than the science. One Inuit group believes the Aurora Borealis appears when departed souls play ball with a walrus skull. Another legend has the lights marking an entranceway for spirits to pass into heaven. In ancient Finland and Russia the lights were thought to be the spirits of murdered warriors continuing to battle one another in the afterworld. I wonder how I might will these lights to appear and weave their magic for me tonight. I desperately want to catch a glimpse of what entranced Robert Service in his famous ballad.

The three of us make a pact to check the skies often during the night. I turn in early and, after all of the fresh air and activity, I quickly drift off to sleep. But, at barely 10:30pm, Mike awakens me. There is a touch of colour in the sky. That’s all he has to say, and Doreen and I are immediately layering on warm clothes and grabbing snowshoes. 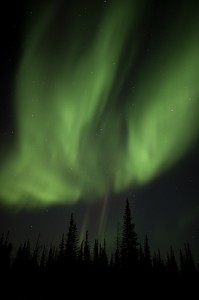 The next morning, I awaken, hardly daring to believe the show the northern lights put on for me last night was real and not a wild dream. The shared smiles on Mike and Doreen’s faces as I stumble to breakfast confirms that it truly happened, and that I have achieved my goal of seeing the Aurora Borealis in all its glory.

Incredibly, there is still another surprise to reveal itself to me before I have to return to more southern climes. As we snowmobile away from the cabin, we detour far out onto the sea ice. Inspired by last night’s success, my next mission looms before me: to set foot on Nunavut, Canada’s newest northern territory. I have never been to Nunavut before but have learned that once you venture into Hudson Bay beyond the low tide mark, you have entered the jurisdiction of Nunavut. 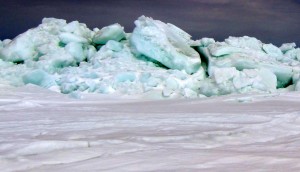 As we progress farther onto Hudson Bay, I watch for the spot where the fast ice meets the floe ice. During my time here, I have learned that fast ice is frozen to the coast, while floe ice moves around in the waters of Hudson Bay. Where the two meet, huge icy boulders twist and heave upwards to form a ridge. Like a child on a jungle gym, I climb around on this icy playground a bit as I enjoy my time in Nunavut, before reluctantly pointing the snowmobile back toward the small pocket of civilization that is Churchill.

Over the course of just a few days, I have explored the natural environment, snowshoed under the magnificent Aurora Borealis, gained an appreciation for Churchill’s cultural and artistic heritage, met some of the friendliest people imaginable, and made a quick detour to Nunavut. I believe that Robert Service had it right … the North is truly a captivating place on all counts. Snowshoers, take note: this is one destination you don’t want to miss! 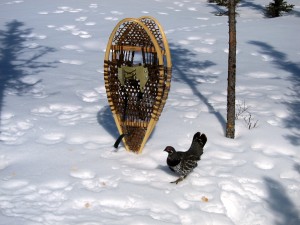 I flew from Winnipeg, Manitoba to Churchill on a Calm Air flight with a flying time of slightly under 3 hours. If overnighting in Winnipeg, the Four Points Sheraton is a convenient and comfortable choice right at the airport. Since I travel with carry-on luggage only, I was checked into my room within 10 minutes of walking off the plane.

In Churchill, I travelled with Sea North Tours, which is operated by Mike and Doreen Macri. Mike and Doreen are kind and knowledgeable hosts who offer a variety of adventures including the opportunity to customize your own itinerary. Mike is also a professional photographer. For a sneak peak at some of the sights you can expect to see, check out Macri Photo & Design.

If venturing beyond the town centre, travel with a local guide who is versed in polar bear safety. A winter trip to Churchill is crowd-free and does indeed feel like a secret that few have discovered. March and April are optimal months for snowshoeing and northern light viewing. Warm clothes and boots are absolutely essential.

I stayed at the comfortable Tundra Inn in Churchill. Gypsy’s Restaurant has friendly staff and delicious homemade meals. Try the pasta primavera.

Parks Canada has a visitor centre and offices in the historic railway station with displays featuring both natural and cultural articles distinct to this area. The large polar bear skin is especially jarring. Mike Iwanowsky, Manager of Visitor Experience, is enthusiastic about the incredible potential for visitor experiences in Churchill and the surrounding area. From summer canoe trips in nearby Wapusk National Park to expanded snowshoe offerings, Mike’s job is to explore possibilities and determine how Parks Canada can work with Churchill’s private operators to offer a wider range of visitor opportunities. Watch this space!

The Travel Manitoba, website has information to help plan all aspects of a trip to Churchill or other Manitoba destinations.

The source of the Aurora Borealis legends is Up Here magazine’s April/May 2011 edition. Up here is an excellent publication that features Canada’s north.