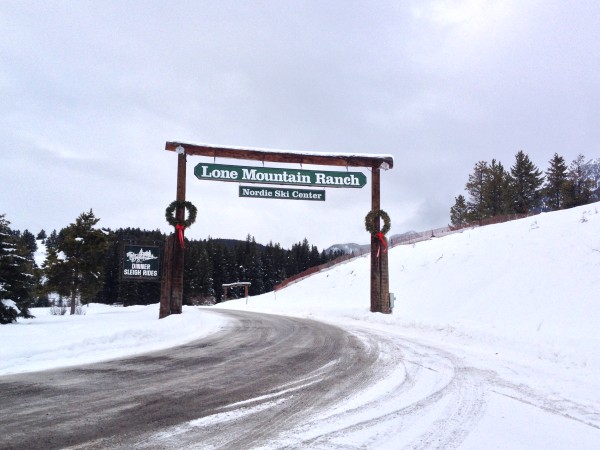 I fell in love with LMR (Lone Mountain Ranch) the first time I saw it. Nestled into a valley in Big Sky, Montana, the ranch somehow manages to be cozy while rambling up the valley and into the mountains. Historic cabins are tucked into the trees and along a little creek. From the well- appointed outdoor shop, 35 km of packed snowshoe trails and 85 km of professionally groomed cross-country trails wind up mountains, along creeks, and around meadows.

My husband, Henry, two boys (seven- and eight-years-old) and I checked into the Blue Spruce cabin in January. Situated with a bunk bed, queen bed, full bath, and wood-burning stove with one of the best views from a toilet I’ve seen in awhile. Blue Spruce was our home for three days. We put our snowshoes and skis on the front porch while listening to the plinking of a little creek. 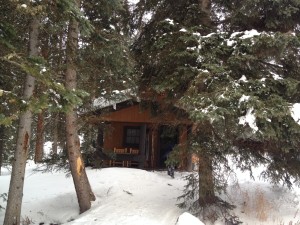 LMR celebrated its 100th birthday in 2015. Previous to Big Sky becoming “Big Sky,” LMR was a homestead. Before snowshoers, skiers, and sleigh riders took over, The Clarence Lytle family worked cattle and horses, and cut hay. Over the decades, the ranch changed hands several times, most recently in 2013 when Makar Properties bought LMR out of a bank holding.

Paul Robertson, general manager of Lone Mountain Ranch, told me they were slowly updating the 100-year-old ranch while maintaining the historic character. It is the historic aspect, along with modern conveniences and luxuries, which make LMR such a special place. All the snow and trees don’t hurt, either.

In the 1950s, LMR was a dude ranch, operating in the summer only. City slickers rode horses and packed into alpine lakes and nearby Yellowstone National Park. Meals were served family style in the dining room, now called the B-K (pronounced B bar K). Today, families play board games around the fire in the B-K. While summer in Montana is fleeting and gorgeous, those early visitors missed out on the magical wonder that is winter at LMR. 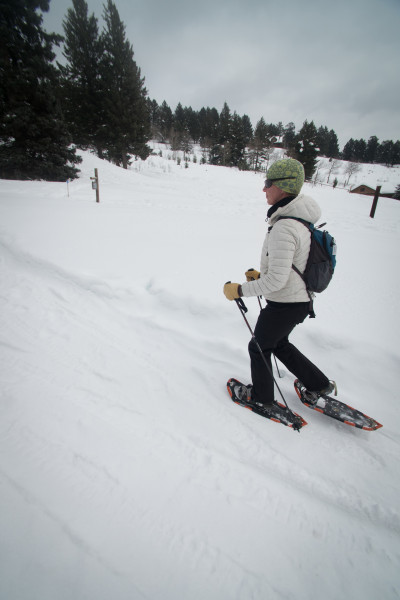 I decided to leave my family to the sledding hill and Scrabble in the B-K, and tromp up the Yellow Mountain Trail. The snowshoe trail left just steps from our cabin and follows North Fork Creek before turning northeast and uphill. The well-signed and well-packed trail made it easy to wander around in the woods without worrying about getting lost.

I listened to chickadees and ravens and followed tracks in the snow. Earlier, Denise Wade, LMR’s director of guest operations told me, “It’s always fun to see tracks,” and she was right. I conjured up stories about the squirrels, foxes, and snowshoe hares that left their mark on the hillside. Lichen dripped off the trees overhead, as did globs of snow perilously holding onto pine and Douglas fir needles.

As the trail looped around the lower flanks of Yellow Mountain, I caught views of Lone Mountain, for which the ranch was officially named in 1954, and Big Sky Resort. I could barely see the alpine skiers zig-zagging and bombing down what is billed as the “biggest skiing in America.” I’m sure they had a blast, but I loved the quiet and solitude of a snowshoe walk among tracks in lightly falling snow.

I’m not the only one who likes s 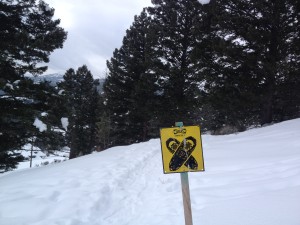 nowshoeing at LMR. Wade said, “On busy days, we’ll rent out of all of our 50 pairs of snowshoes.” Wade said most of the people that stay on the ranch both snowshoe and cross-country ski, they want to try everything.

That evening we hung out in the saloon playing Skipbo, devouring appetizers, and sipping cocktails and root beer. When the very long game ended, we ordered dinner from the dining room menu. It was bison for Henry, trout for me, risotto for Anders, and mac-and-cheese for Finn. We were all blown away by how good the food was. Executive Chef Nick Steen was named one of “The Ten Best Chefs in the Northwest” by The Culture Trip and his food was featured in Zagat’s “8 Reasons to Visit Yellowstone Right Now,” so he knows how to make an outstanding meal.

Like most people, we wanted to try everything the ranch had to offer. The next morning we took the shuttle van up 2,000 feet in elevation to the upper ski trails. The Nordic tracks are impeccably groomed for both skate skiing and diagonal stride.

We set out on the Boomerang Trail through the trees and quickly turned a corner with a full-on view of Lone Mountain. The ragged peak covered in snow jut into the sky well above its neighboring mountains. The trail was heading rapidly downhill, and the kids were out of sight, so we kept our gazing short and attempted to catch up with our speed-demon sons.

It was a quick ski down, and before we knew it we were back at Blue Spruce. We filled our bellies with cheese, crackers, and fruit before Henry and I opted to leave the boys to their books and snowshoe on our own. 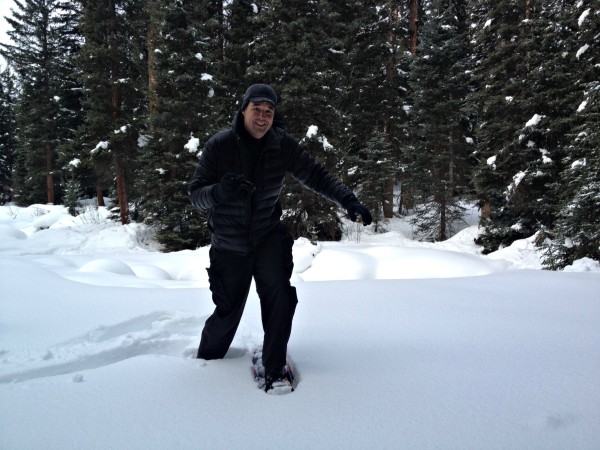 Passing the horse corral, we nuzzled and pet the huge draft horses that pull guests to dinner in the North Fork Cabin. The sleigh ride dinner is one of the highlights of a visit to LMR, or for some, the only reason. Anders and I snuggled under blankets on the sleigh ride a few years ago and ate an amazing dinner, but for this visit our only horse interaction was along the corral fence.

Henry and I continued on the Creekside Trail (2.0 km), eponymously named for North Fork Creek, which pulsed and gurgled near the trail. The creek was covered in snow mounds and ice, with moving water peeking through in between. There were moose tracks everywhere, although we didn’t see any of the big ungulates. The setting was perfect for chatting about the future and celebrating our family time at the ranch. We cut over to Bullwinkles Trail (4.0 km) and saw even more moose tracks in the dense woods. They don’t call it Bullwinkles for nothing.

That evening we sat in th 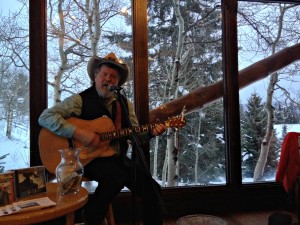 e saloon; wine and beer for the adults, more root beer for the kids. Chickadees danced around the feeders in the aspens trees outside the big windows and Bruce Anfinson sang cowboy and folk songs that made us glad we lived in Montana.

The songs, the cabin and the saloon with its wagon wheel chandeliers and wood stump barstools, made me nostalgic for a time I’ve never lived in. After a few days at LMR, a couple glasses of wine, and songs about old wood skis, I felt like I never needed to leave the ranch, let alone, Montana.