Ithaca is a magical place, located in New York state in the Finger Lakes at the end of Cayuga Lake. Ithaca’s nickname is the “home of gorges” due to the dozens of easy-to-access beautiful gorges formed by the last ice age some 10,000 years ago. Those same glaciers formed the Finger Lakes, beautiful narrow and very deep bodies of water that are home to numerous recreational activities, including snowshoeing. Ithaca is also the home of the Ivy League college of Cornell (one of the snowiest in the U.S.). 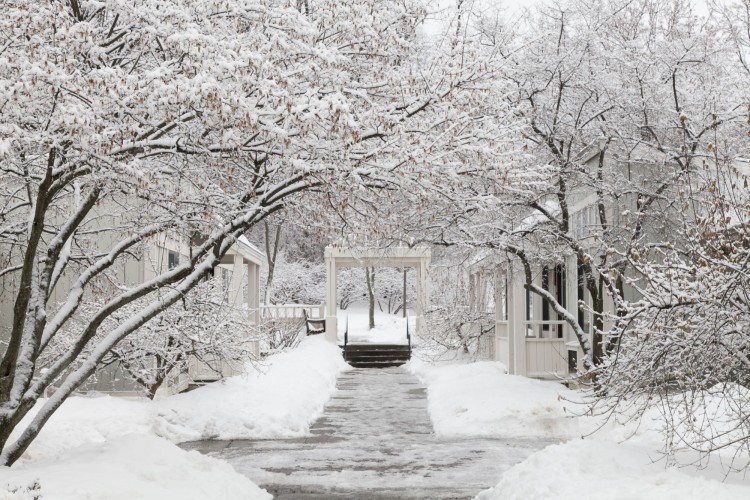 The Perfect Climate For Snowshoeing

The climate of Ithaca, NY, and surrounding areas are often ideal for snowshoeing.  Ithaca averages around 63 inches (160 cm) of snow annually.

With elevations exceeding 2000 ft (610 m) in some places, Hammond Hill gets much more snowfall, though. The snowfall levels here are similar to those of nearby ski resorts like Greek Peak. Here, 122 inches (310 cm) falls annually, providing that perfect opportunity for winter recreation. That extra elevation also extends the snow season well into March most years. In fact, some locals say, “it may be dandelion time in downtown Ithaca, but there is still good snowshoeing on Hammond Hill.”

“The Finger Lakes Region is located in the path of many of the large-scale winter storms that track across the Northeast. It is also close enough to the East Coast to feel the effects of some of those big Nor’easters that dump snow across New England. The area is also close to Lake Ontario, one of the 5 Great Lakes, which sends a few rounds of lake-effect snow across the Finger Lakes Region each winter. Winters also exhibit extended periods of cold, but typically not too frigid, weather partly due to the moderating effects of the two largest Finger Lakes, Cayuga and Seneca.  Finally, it’s colder by nature at higher elevations. So, places like Hammond Hill and Highland County Forest stay cold enough to keep that beautiful ‘white gold’ around for day upon day of winter recreation.”

Although there are many places for snowshoeing and winter recreation near Ithaca, NY, I will highlight two: Hammond Hill State Forest and Highland National Forest. 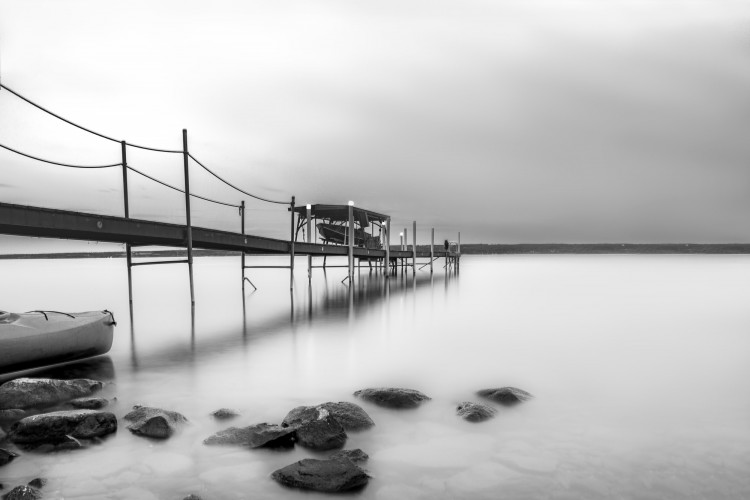 Ithaca is near multiple lakefronts, including Cayuga Lake, which contributes to the ideal climate for snowshoeing. Photo: Ramon Clausell via Shutterstock

Hammond Hill State Forest is a conveniently located New York State Dept of Environmental Conservation (NYSDEC) property in the towns of Caroline and Dryden, about 10 miles east of Ithaca. As noted, the park sits at an elevation of nearing 2000 ft in some locations and covers 3,618 acres with 16 miles of trails.

The trails are used year-round and are perfect for cross–country skiing and snowshoeing in the winter. The NYSDEC and Cayuga Nordic Ski Club maintain the trails with additional help from The Friends of Hammond Hill State Forest, the Town of Dryden, and the Ski Patrol.

The trails are identified by colors. Shorter trails feature gentle slopes and are easier to maneuver, while intermediate and advanced trails are longer and have steeper slopes. The trails are as follows:

For more information related to Hammond Hill, including a trail map, visit the NYSDEC website.

The Super Frosty Loomis is an annual 5k/10k snowshoe hosted by the Finger Lakes Running Club at Hammond Hill during Super Bowl Weekend in February every year. Because the trails are well marked and used for a wide variety of outdoor activities and sports like snowshoeing and cross–country skiing, they are packed down nicely for the snowshoe racers. 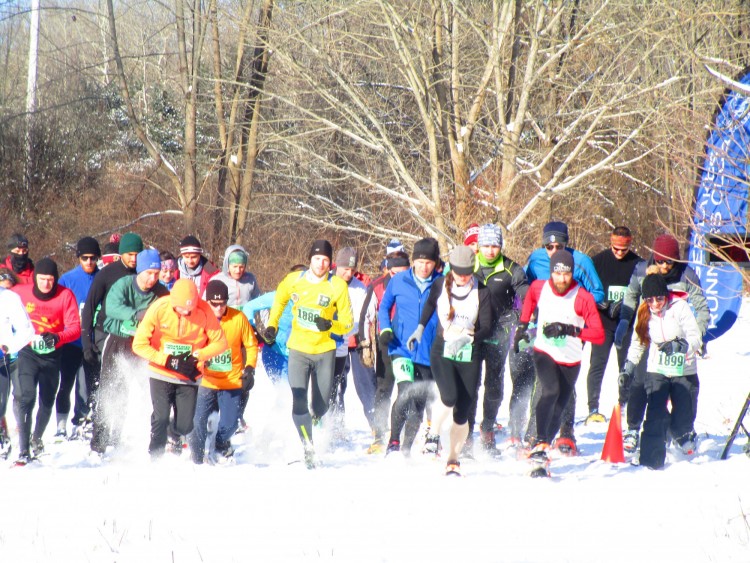 Highland County Forest is about a 1-hour drive northeast of Ithaca, located in the town of Fabius. The property encompasses 2,759 acres at an elevation of a little over 1,400 feet (427 m). Its location is more favorable for heavier snow events off Lake Ontario. Also, the average snowfall is in the range of 120 inches (305 cm) annually.

The Highland County Forest has 20 miles (32 km) of groomed trails used year-round, including cross–country skiing and snowshoeing in winter. The Onondaga County Parks Department maintains it with help from the Highland Nordic Ski Patrol.

The forest has an elevation change of about 400 feet (122 m).  Plus, the trail systems range from easy to difficult, giving all experience levels of winter sports from beginners to experts a fun challenge.

The five snowshoe trails include:

All the trails start at the Skyline Lodge (see area map), where you pay a small fee before setting out. For trail conditions, check out the Onondaga County Parks website.

The 2010 PowerSox U.S. National Snowshoe Championship races took place at Highland County Forest on the first weekend in March. After qualifying, athletes participated in several 5k and 10k events. However, there was also a “citizens race,” which you did not have to qualify for. I put my snowshoes on and set out on that grueling 10k race. But, it was worth every bit of sweat and energy because I got to say I participated in the U.S. Nationals. 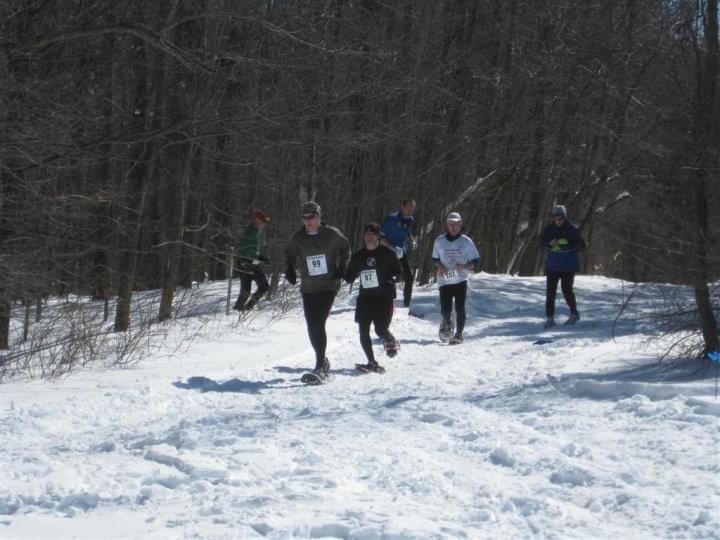 The 2010 Nationals course was tough! The author is #87 in this photo. Photo: Adam Niziol

The wonderful climate of Ithaca, NY, and the Finger Lakes region brings the fun and enjoyment of snowshoeing and winter recreation right to your doorstep every year.

No matter the trail, I look forward each season to get the “shoes” out and watch that all-important forecast for snow!

Thank you to Nigel Dyson – Hudson, Tom Niziol, Eric Sambolec, Boris Dzikovski, and Mike Niziol for their insights and contributions to this article.

Would you go snowshoeing at Hammond Hill or the Highland County Forest near Ithaca, NY? What are some of your favorite places to snowshoe near Ithaca? Please share with us in the comments below.