Over many years of snowshoeing, I humbly learned lots of lessons through experience. A few years ago while on a short adventure out west, I learned that snow and snowshoeing is different there than in the Great Lakes region of the Midwest where I live…and that I should not venture into unfamiliar territory assuming it is the same. Snowshoeing in deep mountain snow is unlike snowshoeing on flat Wisconsin trails.

On a past visit to Colorado, I planned to do a little solo snowshoeing in the Rocky Mountain National Park. I drove up to Bear Lake (elevation 9,475 feet), located not far from Estes Park. When I arrived, I found many people snowshoeing on the frozen lake. Others were on trails that partially surrounded the lake and that traversed through the mountain forests. This winter wonderland offered spectacular views of the lake from high ridges, of open snow-covered meadows and of woodlands backed by white-topped mountains.

Following an enjoyable trek on and around the lake, I decided to snowshoe on a single-track trail high above the lake and explore the area. I came to an off-trail spot that overlooked Bear Lake. It provided a magnificent panorama of the surroundings. So, I decided to get a closer look and broke trail onto the untraveled snowfield.

When I came to a halt, I became curious about the depth of snow where I stood. I expanded my collapsible hiking staff as far as it would go and slowly pushed it down until it hit ground….or possibly until it hit rock. I was surprised when I realized I was standing on neck-deep powder snow. It then dawned on me that if I fell over into this deep snow, I may not be able to get up and could suffocate. At that point I nearly freaked-out. Rather, I collected my composure, took a deep breath, slowly turned around and got my butt back on the snow-packed trail.

This Midwesterner that snowshoed so many years in the flatlands of Wisconsin, with rolling hills and occasional high bluffs, was not prepared for the powder snow-covered mountains out west. 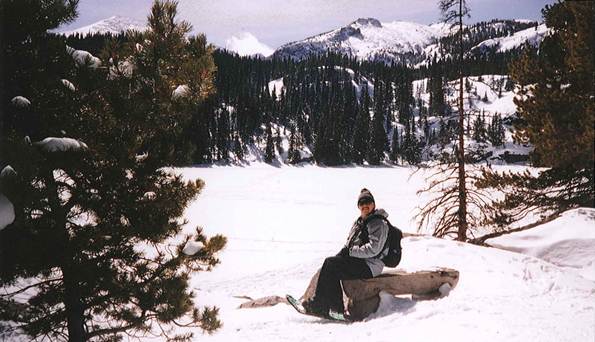 Snowshoeing at Bear Lake in the Rocky Mountain National Park in Colorado.

Why the difference in snow out west?  Naturally, high in the mountains there is often a lot of snow. A report from Current Results: Research News and Science Facts, points out that the most snow to fall in a 24-hour period was recorded on April 14, 1921 at Silver Lake Colorado…. elevation 10,200 feet. The snowfall measured 75.8 inches. That is over 6 feet of snow. Reportedly, snow kept falling after 24 hours, and the next day a total of 95 inches of snow fell from the 32.5 hour blizzard, setting yet another record for the deepest accumulation from one continuous snowfall.  I do not believe my hiking staff would stretch far enough to measure snow depth when standing atop that snow pile.

Reportedly, the snowiest region in the country on the average is in the Cascade Mountains of Washington State. And Current Results reported that Mount Baker downhill ski area has the world’s record for the most snow in a single year (1998-1999), at 1,140 inches (95 feet). These are however unusual totals for mountains. But nevertheless, vast amounts of snow rest in mountainous areas compared to hills of the Midwest.

Also, snow conditions tend to be different in the western U.S. compared to the Midwest. According to the National Snow and Ice Data Center, atmospheric condition affect how snow crystals form and what happens to them as they fall to the ground. Once snow is on the ground, the snowpack may assume different qualities depending on local temperature changes, winds that blow snow, and the length of time snow has been on the ground. Mountains have major climatic variables that impact snow.

In Gene Prater’s “Snowshoeing: From Novice to Master” (Edited by Dave Felkley), he wrote, “Snow is at all times sensitive to an infinite variety of modifying conditions. The only predictable thing about it is that it will be different higher up, around the corner, or over the ridge. Temperature and wind are the determining factors.”  Snow conditions will vary greatly in the mountains depending on elevation. At higher elevations, the temperature is colder, dropping about 3 degrees Fahrenheit for each added thousand feet of elevation, according to Prater. Cold temperatures are associated with powder snow; thus much powder lies high in the mountains.

Crusted snow conditions on the other hand are a result of changing temperatures and sunshine, where warming and thawing melts snow surfaces and nighttime cold temperatures freeze it. The wind packs and firms up snow, making snowshoe travel easier than in the deep fluffy powder. North sides of mountains do not firm up as quickly, and deep powder snow may remain in those areas longer, as well as in some of the forested areas. Those mountainous areas are hazardous for avalanches.

Home in the Midwest

We too have powder snow in the Midwest, especially when it is very cold in some of our most northern areas. We just do not have very high elevations. The highest elevation in Wisconsin is Timm’s Hill at 1,939 feet. And, I have not heard of an avalanche occurring on Timm’s Hill. But snow is often packed and firm in many areas as a result of climate conditions impacting varying terrain. For example, snow in large open areas such as along lakes tends to be wind-packed and better for snowshoeing.

By comparison, the Great Lakes region of the Midwest also has far less snowfall than in the western mountains. I live on the Eau Pleine Reservoir in Wisconsin, and this is where I often snowshoe. In looking at NOAA’s National Climatic Data Center information for the Eau Pleine Reservoir, the seasonal maximum snowfall reported over a 13-year period was in 2000 with 62.4 inches. Although, another report showed the greatest seasonal Wisconsin snowfall total on record was in Hurley, Wisconsin with 301.8 inches in 1996-1997.That is not much snow compared to over 1,000 inches on a western mountain around that time. 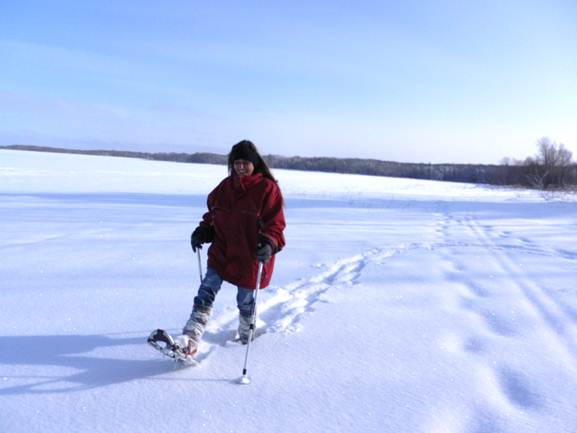 Snowshoeing along the Big Eau Pleine Reservoir in the flatlands of Wisconsin.

Heading in the opposite direction ….eastwardly, I found snowshoeing in the hills of New England to be similar to the Midwest. However, I assume snow in the eastern mountains is somewhat similar to the mountainous areas out west. I backpacked in the White Mountains of New Hampshire one summer. But I have not experienced the mountain snow there. Mount Washington is the highest peak in the northeast with an elevation of 6,288 feet. Although not as high as many of the peaks out west, Mount Washington is known for its heavy snows, frequent icing and exceedingly high winds. The highest wind gust recorded was 231 mph in 1934, according to The Mount Washington Observatory.

At that time Vermont had a good amount of snow, seemingly more snow on the average than what I was accustomed to snowshoeing on back home. The experience was exhilarating and enjoyable. I especially appreciated a hike at dusk on trails that meandered through a scenic forest. When coming to an overlook, I could see snow-covered rolling hills for great distances, giving me a sense of being in a Currier and Ives winter scene painting.

NOAA’s National Climatic Data Center reported the seasonal maximum snowfall over a 9-year period in Morrisville, Vermont (not far from Stowe), to be 155.5 inches in 1971.That is over twice as much snow as the maximum snow reported on the Eau Pleine Reservoir back home. In looking at more recent reports however, they too had some years with as little snowfall as we had in Wisconsin. 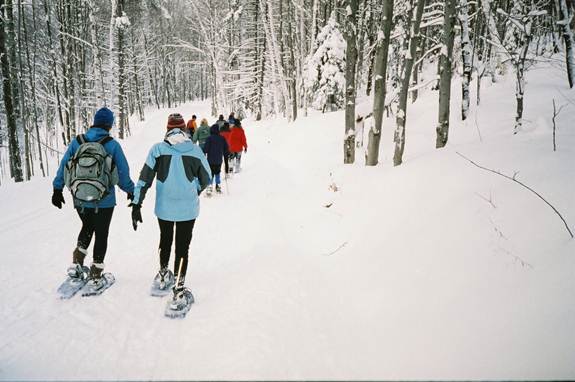 Snowshoeing in the hills of Stowe Vermont.

Be it in the east, the west or Midwest, most people that snowshoe tend to have one pair of snowshoes.  I have six pair. My wife argues, “Why do you need six pair of snowshoes when you only have two feet?” Contrary to her comment, I do have varying uses for them. I primarily use my Northern Lites Backcountry shoes for most outings. However, I have a slightly larger pair of Tubbs and two larger pair of tradition wood-frame snowshoes I wear occasionally depending on snow depth and conditions.

When snow is deep and powdery, I sink down further than on packed snow. A slightly larger snowshoe is better since I need more deck surface in order to provide greater floatation. I then use the larger snowshoes to accommodate the difference in snow conditions.

For those who prefer having one pair of snowshoes, I recommend selecting the shoe that fits your needs relative to snow conditions and the intended recreation use for most of your snowshoeing outings. Reference the snowshoe company size and fitting charts for the best size for you. If you do plan to snowshoe in other snow conditions and for other uses, you may want to invest in a second pair. If planning to snowshoe in deep powder on occasion, get a slightly larger pair. If planning to run or race on packed trails, get a smaller pair.

And, should you have opportunity to travel, consider bringing your snowshoes along and try snowshoeing in different parts of the country. When doing so, research the new area and make yourself aware of any potential dangers….something I failed to do on that Colorado trip. Gene Prater once wrote, “If there is any question about safe conditions – DON’T GO! Try another route, or use your poles to check the conditions. If your poles easily poke through, so will you.”  Have safe travels, safe snowshoeing, and enjoy the differences.