Basketball, volleyball, football or kickball, you name it and it can be played in the snow on snowshoes. All you need is a little creativity and modification to the rules. The bases were loaded and a large orange beach ball was being rolled on a beaten-down path of snow toward the player. It was kicked high in the air. The outfielder tried to catch the fly-ball but fumbled, and in came most of the runners for a streak of homeruns for the team.

When it was my turn, I kicked the ball toward left-field to give me an advantage of making it to first base. I kept my snowshoe low to the ground as I pounded the advancing object. The player covering third-base stopped my ball and came running toward me. I dove belly-down sliding toward first-base as she threw the ball directly at me. She missed and I was “Safe!” It was a thrill sliding into base on a blank of snow at my age. After all, I’m old enough to be a grandpa to many of these kids.

Hiking on trails or highly competitive racing is the first that comes to mind when thinking of snowshoeing. But when introduced to playing a variety of games on snowshoes, kids and adults alike find a whole new dimension to the sport that is both fun and exciting.

Many favorite traditional childhood games can be played on snowshoe. For example, “follow the leader” is a simple traditional game to play with a group of children. I add a little fun to the game by having kids identify an animal and demonstrate how that animal would walk. The first child leads the group over hill and dale, walking as the animal walks. All others mimic that particular stride. After a couple minutes, the child drops to the back of the line and the next one takes the lead with a new animal walk. I continue until everyone has a chance to lead and come up with a creative fun stride. My intention is to use the game as a warm up exercise and a chance for beginners to walk on their snowshoes in moderately varying terrain.

“Hide and seek” is a fun game of tag, as children hide and then chase each other on snowshoes. As a child, I always enjoyed playing “Red light, green light, I hope to see the ghost tonight.” I modified this for my children’s snowshoe classes and substituted the word “ghost” with “abominable snowman.” The kids love it! The child who is “it” closes their eyes and counts to 25. The other kids hide behind trees, in shrubs and snow banks. After saying “Red light, green light I hope to see the abominable snowman tonight,” the child who is “it” leaves home base and goes out to look for the others. The object is for the all the other kids to run to home base and avoid getting tagged by the seeker.

Another fun tag game I recall from my early childhood is one we use to call “pie.” Later in life, I heard it called “trail tag” and “snow maze.” It takes quite a bit of preparation for the game. In a large yard or field, create a maze in the snow with a shovel or by making trails with your snowshoes. Have the maze twist and turn with intersections and dead ends. The person who is “it” counts to 10 while others scatter, staying only on the trails of the maze. The object is for that person to chase after others on the trail until they tag someone. The tagged person then becomes “it,” and the game continues. Snow maze is also a fun game for adults. 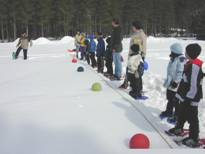 Most ball games can be adapted for playing on snowshoes. In kickball, I use hula-hoops for bases and a very large colorful beach ball. The game has similar rules as baseball, in that the object is to run the bases after a kick, trying to reach home plate. Rules of foul balls, strikes, fly balls and tagging with the ball all apply. With some modifications, you can also play softball in the snow. Spray paint your softball orange or red, since in snow a white ball will easily be lost.

Volleyball is a challenge on snowshoes. However, I warn the teams that they should not jump high on their snowshoes, as the shoes could rotate and cause injury.

A Day at the Races
Organized Olympic-style racing games can be great fun for a neighborhood or school event. Set up a cross-country trail through a neighborhood park and run a distance race. Make a straight track for sprint racing or a circular track for longer distance running. You could also add in the passing of a stick between team members for a marathon relay race.

I purchased four plastic sleds and use them in both my children and college snowshoe classes. I break groups into four teams of three for sled pulling competitions. To set boundaries, I place a 50-foot rope across the snowfield about 100 feet away as a finish line and mark the ends with orange cones. One person rides on the sled while two others pull the load toward the finish line. At the sound of a whistle, students will hoot and holler as they stampeded toward the finish line in pursuit of a win. 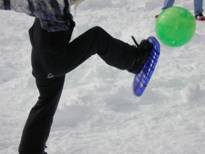 Creating Your Own Games

With a vivid imagination and a few inexpensive props and toys, you can create your own games on snowshoes. I purchased different color and size balls at a discount store and created kick and throw ball games for my classes. One particular game involves teams made up of three players competing in a relay ball-kicking game. At the sound of a whistle, the first person on each team kicks their ball toward a 50-yard finish line. Once the ball comes to a dead stop, the second player runs out on the playing field and kicks the ball again, followed by the third team member in succession. The team whose ball crosses the finish line first is the winner.

I dug into a holiday storage box and found a large bag filled with plastic colored Easter eggs and baskets. With teams of three or four players, I place a basket for each team at a starting line. A dozen eggs are laid out about six feet apart heading straight out from the baskets. At the sound of a whistle, the first team member runs out to the furthest egg, picks it up, and brings it back to place in the basket. Once the egg is in the basket, the next team member runs to the next egg, and this pattern continued until the last egg is placed in the basket. The team finishing first wins the game. Both kids and college students find this competition fun and challenging.

Games can be an integral part of neighborhood, school, community, nature center or church snowshoeing events. For example, I coordinate and co-teach a “Kids and Parent Snowshoeing Weekend” program at Treehaven, an outdoors facility that is an extension of the University of Wisconsin-Stevens Point. In addition to snowshoe instruction, hiking and a relaxing campfire in the evening, we spend a lot of time playing games on snowshoes. Parents and their Children are able to take the game ideas home and make playing on snowshoes a part of their family and neighborhood activities.

Although having fun seems to be the primary objective to playing games on snowshoes, there are other benefits. Children and adults enhance camaraderie, gain teamwork skills, experience the thrill of competition, and engage in aerobic exercise. They also put their snowshoeing skills to use. Games give opportunity to learn and use basic snowshoeing techniques such as breaking trail, developing a stride, utilizing traction devices, turning around, getting up, traversing, ascending and descending. Sometimes the skills come naturally as they play. I first instruct my students on basic snowshoe techniques as a prerequisite to games.

With a little creativity, you can make up your own games and expand your repertoire to include a long list of activities to play on snowshoes. Be it with your children or an organized group of kids and adults, games can make snowshoeing exciting. Like Mom says, “Go outside and play!” So in winter let’s do just that with games on snowshoes. 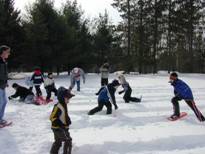