Rio’s 2016 Olympic Games and the surrounding media blitz rival other Games’ sites. Read the history evolving from these global festivities, athletes, and competitions that live in a type of infamy bubbling up every four years in the dominant summer Games. 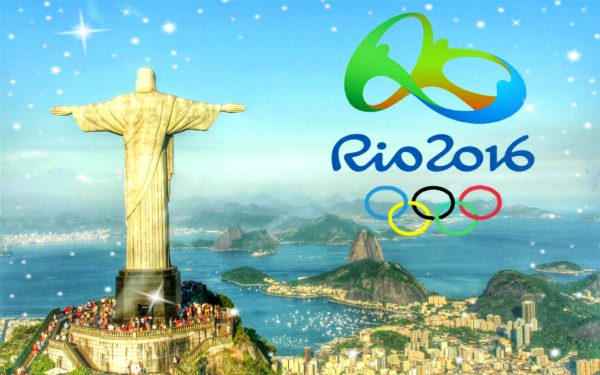 Thrills of the work in research emerge when volumes like Rick Broadbent’s astounding “Endurance: The Extraordinary Life and Times of Emil Zátopek” arrive on the desk. In this case, I initially discovered then borrowed the book from the Hennepin County Libraries serving the Minneapolis metro.

Flipping pages open first to the index and then starting to read through the book, learn of  Zátopek’s enormous achievements and life in the Czech world while also discovering helpful tidbits and interesting insights on competition, communism and compassion. I’ve highlighted a few out of the book’s 303 pages [two just to list his world records and Olympic Medals], so perhaps you may benefit, too. Get the book for much, much more. 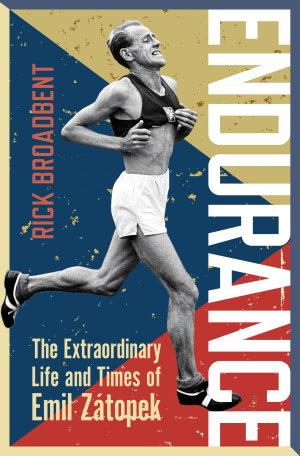 Zátopek ran with two halves of his body. The lower half barely touched the ground in his economical strides; the upper displayed a three-ring circus of painful grimaces, flailing arms and a spasmodic, bobbing head. His freaky style seemed enough to throw off any competitor running near him.

The 1948 London Olympics, the first after World War II, debuted a new feature: a color version of the official Olympic film. Uncovering that fact on page 85, I went about the process of locating a copy “XIV Olympiad: The Glory of Sport” that Broadbent referenced. Founder of the Olympic Committee, Baron De Coubertin’s most famous quote opens the movie:

The most important thing in the Olympic Games is not winning but taking part; the essential thing in life is not conquering but fighting well.

Of course styles of the time are a hoot now, more than 60 years later, though they led the world to a new progressive look plus a baby boom in the post-war environment. View the 1hr 34min film Here.

A topic of perseverance popular in today’s running and snowshoeing finds its history emanating from Zátopek: making a friend of misery in an endurance race. Prior to the September 1951, 20000-meter race, he ate a large meal, a shocker today but not uncommon for the time. Broadbent quotes him revealing “Then I felt a pain in my side… I cursed the substantial meal I had only three hours earlier.” [pg 160] The stitches continue to tighten “so intense that it was like white noise, so searing that he could not tell if it was there at all; and then he was out the other side, beyond pain and into a new comfort zone”  [italics mine]. In other words, he made peace with his agony, utilizing the pain to fuel his drive to setting a world record in that very run. 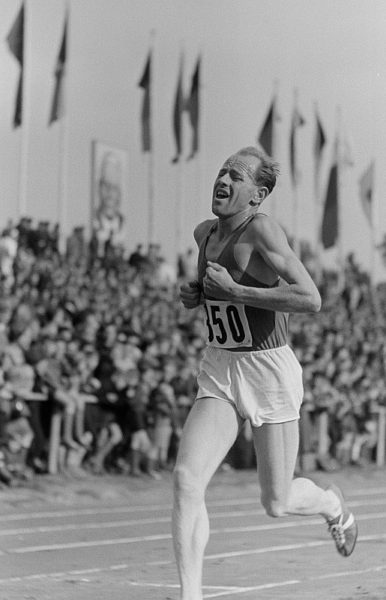 Most of us aren’t in the business of driving world records, but race to win the event, a class medal or perhaps the satisfaction of achieving a finish. The mind can very well make it tough on the runner, particularly like I experienced in the first mile of  the 2012 Tuscobia Winter Ultra event. The misery chorus crooned “quit, quit, quit,” then slammed this unnecessary slight home: “you dimwit.” Spending a day battling that requires hardcore determination and stamina, particularly in the drive to finish. Finding mental ammo to overcome the demon negativity means finding a friend in one’s bitter pain just as Zátopek rejoiced, “I felt no tiredness, at that moment… just like an automaton I ran lap after lap…”

The author addresses this subject again just three pages later, this time with nemesis Gordon Pirie racing Zátopek in a 10,000-meter event. “[Walter] Hesketh went to pieces and dropped out… in the heat of Yugoslavia. Pirie kept going, finding that zone of pain and consequence that he so loved and hated. His senses swirled.” [pg 163] 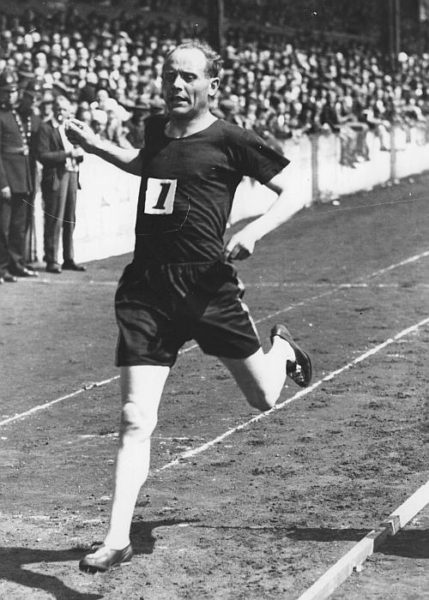 Paavo Nurmi, aka The Flying Finn, won the 1500m and 5000m gold medals in Paris’ 1924 Olympics, but the rest-of-the-story is: there was less than an hour between the two races.

Covering the intrigue of Olympic Games, Broadbent recounts a number of early challenges and consequences to Olympians, even one of the most famous, Paavo Nurmi, the infamous Finnish distance runner. Holding multiple records and Olympic medals in the 1920’s, he nevertheless suffered a ban from the 1932 Games “due to his expense account” [pg 165] that seemed to show the council his status as a professional versus an amateur athlete. Tell that to the USA NBA basketball stars today who won two earlier Olympics. Even with some stars staying away from Rio’s mosquitoes, NBA professionals are favored to win yet again. Their salaries added together exceed the entire budget of the 1932 Games many times over, but times changed particularly with the advent of live television coverage and the bid prices for the broadcast rights.

Prepping for the 1952 Olympics with the Russians back in the Games after a long absence, Zátopek headed for the mountains. There he trained “by wading through chest-high snow, to the amusement of onlookers.” [pg 168]

This caught me by surprise because at his six feet in height, snow would be at least five feet in-depth. Just moving would be difficult, much less driving forward. 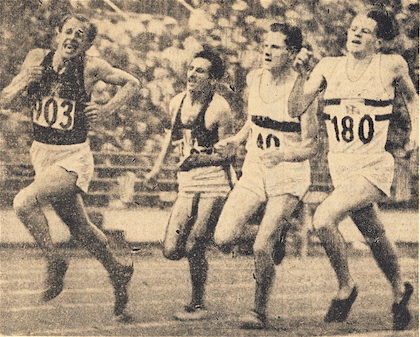 Zátopek (L) surges forward in the last turn of the 1952 Olympic 10000 meter, outlasting Alain Mimoun, Herbert Schade, and No. 180 Christopher Chataway, losing the lead and then falling.

The punch line is this: he won the three distance gold medals at Helsinki that year: the 5,000 meter, 10,000 meter and the marathon, his first try at that distance. This extraordinary accomplishment established an incredible mark not yet equaled. With the modern specialization required just to make the Olympic teams in track and field, equaling his mark falls into the “unlikely” category.

Minnesotan Ron Daws used one technique in training that Zátopek favored when Daws unexpectedly qualified for the U.S. marathon team for the 1968 Mexico Olympics: wearing heavy clothing to acclimate and simulate the heat in a summer race. “(Zátopek) put on two tracksuits to force himself to sweat” though in this case, he wanted to purge a fever out of his body “believing that he would drip away the illness.” [pg 169] Further, the Czech used hypoventilation training where he held his breath or reduced the frequency of breathing while running. Often he used trees as his goal to pass before allowing himself to breathe gain. Gulp!

Zátopek demonstrates the use of mental tricks to gain an advantage in a race. One of many examples, stepping up to a competitor just before a race start, he would proclaim that runner the favorite, which put an enormous mental load on one’s shoulders with such a remark from the famous racer. There is no time to shake it off. The gun fires, the damage done.  As the author describes the technique, “Kill or be killed.” (pg 180)

A communist, as one discovers, Zátopek’s twisted life emerges. His remarks that friend Milan Švajgr, a 5000-meter competitor of his, would defect back to his homeland if allowed to attend the 1952 Helsinki Olympics, kept Švajgr out of the Games. (pg 170-173) Was it truly that or perhaps one way to beat a competitor is to keep them out of the race?

Standing his ground against the communist regime, he flatly refused to board the plane to those same Olympics if Stanislav Jungwirth, whose postman father faced accusations of delivering anti-state mail, could not go. This defiant demonstration put Zátopek in danger as authority wasn’t used to being shown up in any way or form. Yet, they finally yielded. The history of the Olympics because of Zátopek’s trifecta in 1952 would never be the same.

Historic tidbits of enormous value and fun find their way into the story. A favorite comes from a 5000-meter race, which Zátopek won. Further back in the field, popular English racer Christopher Chataway, after a fall when in the foursome for the lead, resumed racing to only have teammate Gordon Pirie pass him at the finish. The English press turned on Pirie with a vengeance. Remarks labeling “him a bad sport for passing Chataway” dominated their view. Pirie, completely beside himself on the assertion, lashed out at reporters like many would like to do in major sporting events: “I was so furious that I flung my kit into the corner of a room and decided to give up running. How could men who could not run 100 yards have the effrontery to talk such damaging nonsense? [Italics mine].” (pg 193) Remarkably, Chataway became the one who convinced Pirie not to quit. 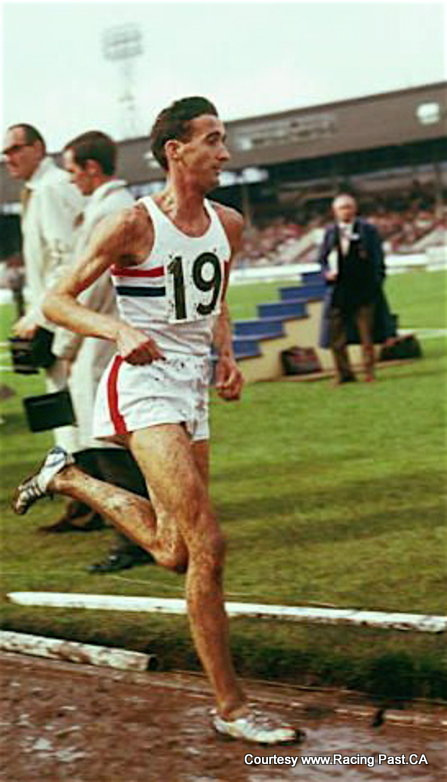 As a teen, Gordon Pirie was mesmerized by Zátopek’s heroics. He set several world record marks.

Will the two-hour barrier in the marathon ever be broken? Zátopek won his gold in 1952 with the time of 2:23:03. The runner who broke the four-minute-mile dam, Sir Roger Bannister, opening the era of three-minute miles like a flood 62 years ago, thinks so. The author provides a compelling account of how that mile mark occurred along with the controversy surrounding it: was Bannister’s race a real race or just filled with rabbits to spur his pace? Broadbent astutely states, “Sport is about getting there first, both as a race winner and pioneer.” (pg 224)

The marathon mark Bannister opines to fall is the RIO 2016 Games, adding a whole new level of excitement for that race. (pg 215)

Like every Olympics it seems, controversy surrounds Brazil’s 2016 Games, but the competitions will occur regardless. The book provides even more incentive to watch them with the understanding of the enormous history created over the years. The devastation of failure hangs around for those not on the podium, or not satisfied with just a podium finish, with no way to make the four-year time until the next Games click any quicker.

If ever an athlete needs an incentive to finish a race or endurance test, read the account of Great Britain’s Jim Peters about to win the 1954 Commonwealth Games marathon. Leading by more than 15 minutes, far ahead of the others, a gold medal beckoning with the finish line in sight, he suddenly fights crippling heat-demons. He raced without consuming water or other liquids, unknowingly almost killing himself. “There were reports of women crying and people vomiting at the awful spectacle.” (pg 227) The Province published this article on the frightening scene. 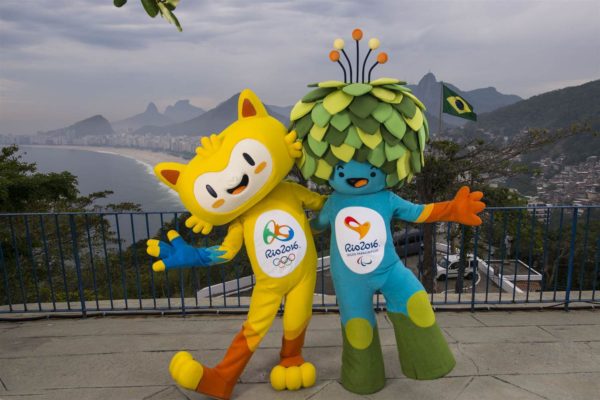 The mascots of the 2016 RIO Olympic and Paralympic Games

Broadbent best summarizes Zátopek’s public appeal when discussing his world records versus Bannister’s mark, and the differences of fame both received. He writes, “Zátopek showed he could run on his own at even pace or win titles by surging throughout. He was the running everyman. [italics mine].”

I read through a great number of books, all of which are helpful in my ongoing research. Endurance: The Extraordinary Life and Times of Emil Zátopek rates as quite special. Everyman and everywoman with an interest in athletics and sports… consider this volume.