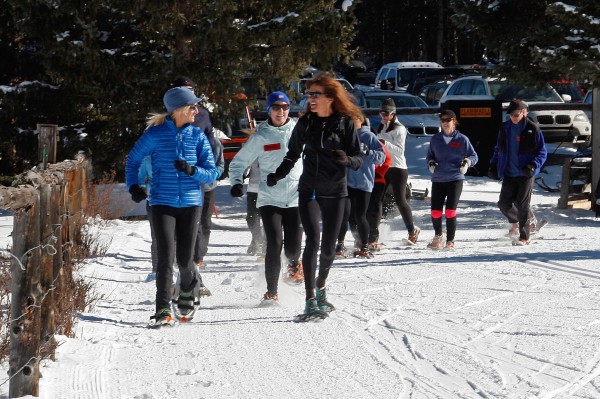 Laurie Lambert and Ceal Walker had raced against each other numerous times, but it wasn’t until they traveled together to the 2010 World Championship Invitational in Vancouver that they really got to know one another. “I am not even sure how it initially came about,” Lambert says. “We were thrown together with the notion of being travel buddies, probably because we are both ‘misfits’ from non-snowshoe racing states: Texas and Florida.” The duo has continued to travel together since, most recently to Italy for the Ciaspolada.

In December 2011, when Lambert taught a snowshoeing racing clinic in Red River, New Mexico (hosted by Enchanted Forest Cross Country Ski & Snowshoe Area), Walker flew up from her home in Florida to take part and help out. Both women plan to compete in USSSA Nationals in Frisco, Colorado on February 24-26. In addition, Lambert is also behind Enchanted Forest’s upcoming Second Annual Low O2 Snowshoe Challenge on Sunday, Jan. 29 (a regional qualifier snowshoe race for the USSSA Nationals). In the meantime, they share their thoughts about their burgeoning sport:

But first, tell us about yourself:

LAMBERT: I have two spectacular sons, Noah (17) and Bridger (14), and a spectacular husband, Brian. I try to weave in being an artist and musician along with being an athlete –not always an easy balance with home schooling, but I will it to happen.

WALKER: I have two daughters, Lex (20) and Kara (12). I am an artist and teach art at the high school level. I am the head coach for cross country and track at Cocoa Beach High School – my girls’ team just finished third in the state, boys were fourth! I love sports and the outdoors; I surf, paddleboard, bike, hike, snowboard, and run. In my previous running life, I was the Florida State Champion in 300-meter hurdles in high school, then ran for the University of Florida, and later Team Adidas.

How did you get into snowshoeing?

LAMBERT: We all had snowshoes just to get to and from our Red River cabin since it isn’t accessible by vehicle for five or six months of the year. My own snowshoes were strictly utilitarian – big, bulky things. I’d use them to hike or just to get myself out to the County Road. Then, I’d unstrap my snowshoes, stash them behind a tree, put on running shoes, and take off. But when the paved road was too icy or hadn’t been plowed, I felt cut off from running.  I had a treadmill at the time, but I craved running outdoors. That’s when I had the idea to try my kid’s tiny snowshoes and see if they’d work to snowshoe run. At the time, I had no idea there was already a growing sport of snowshoe-running and that specific snowshoes were being made for such.  It was a much smaller sport back then, barely getting started.  I felt like I’d stumbled onto a whole new frontier.

WALKER: I’d read in a magazine that there were snowshoes you could run in, and I thought I’d like to try. In 2002, we took a family trip to Steamboat Springs, which, coincidently, was hosting a snowshoe race. I signed up for the 5K and was surprised when I finished first! A few years later, we were in Utah, where I ran another race and finished third.  The race director informed me I had qualified for the national race in Vermont. I was surprised to learn that there was a whole snowshoe association and a national race every year. At nationals, I won my age group, met a lot of great people and realized that this was something I wanted to do on an ongoing basis every year. Snowshoe running is just a different type of competition – it is much harder than any other type of racing, and that makes it more appealing to me. It is exhilarating to be out running on beautiful trails in the snow. 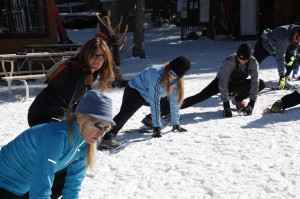 LAMBERT: Anybody who can walk can snowshoe, but if we’re talking about snowshoe running, then aerobic capacity is paramount.  The enjoyment factor skyrockets when your body already knows the movements and the breathing.

WALKER: Snowshoe running is definitely a strength and endurance sport. It entails a lot more leg lift and leg strength because you are running on a lot of varied terrain. I found that times when I was running fast on the roads didn’t always translate to the snow, so adding strength training really helped.

I am at a little disadvantage because I live at six feet above sea level in a very flat area of Florida. The only hill training that I can incorporate is in the form of a bridge or parking garage! I train wearing snowshoes on the soft sand on the beach, usually early in the morning before it gets too hot. I get some funny stares and double takes!

What advice do you have for first-time snowshoe runners?

LAMBERT: Snowshoe running is more difficult than road running or trail running, particularly if it involves deep powder. Start very slowly, and find your rhythm.  There’s a powerful tendency to start out at your normal running pace, but you can’t expect your running times to translate to snowshoeing. You’ll be at least a minute per mile slower running on snowshoes – often two or three minutes slower, depending on the conditions.

WALKER: Test a variety of snowshoes to get the best feel for you; it’s like trying out running shoes – one variety might feel better than another. Also, you’ll realize that snowshoeing takes a little more effort than just going for a regular street or trail run. Your pace per mile will usually be at least two to three minutes slower than on the roads. You may have to run/walk at first to get used to the bit of extra effort. Dress appropriately; you will heat up after about 10 minutes, so don’t over dress.  Usually a good pair of running tights, a heavy base-layer top, hat and gloves will be sufficient. Regular running shoes or trail runners with wool socks should be enough. Try to run with good form, paying attention to proper arm swing.

What’s one piece of gear you can’t live without?

LAMBERT: My Kahtoola MicroSpikes.  You thought I was going to say a pair of snowshoes, didn’t you?!

WALKER: In Florida, I can’t do without my INOV8 gator socks. They are a gaiter built into a sock. They are the only things that keep the sand out of my shoes while training on the beach. 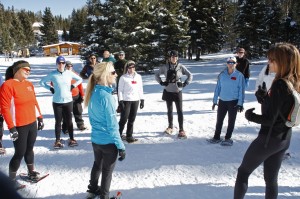 Walker and Lambert discuss how to tackle a hill on snowshoes. Photo by Ellen Miller-Goins

What’s been the highlight of your snowshoe career thus far?

LAMBERT: Our World Cup in ’07 was on the Dachstein Glacier in Austria. Just getting up to the glacier was like something out of an old James Bond movie. I got a bronze medal there, so that was definitely a career highlight. In 2010, the World Cup was alongside the Winter Olympics in Vancouver. We shared the same mountain with the Olympic events and although our sport is not yet an Olympic sport (we’re working on that!), they treated us as though it was. That was incredible.

However, if you really want to know what the absolute highlight has been, I have to honestly say that it has been the people. Cheesy, but true. I have met my tribe through this sport.

WALKER: One of my biggest highlights was finishing in the top-10 at Nationals when it was held in Minnesota, and also finishing 17 out of 7,500 at the Ciaspolada. I always wonder how much better I could be if I could train at altitude in snow! The real big highlight has been the experiences of competing on some beautiful and very challenging courses like Mount Hood, The Screaming Snowman in Eldora, Colorado outside of Boulder, and the Nationals at Snowbasin, Utah. All of the courses are diverse and beautiful.

The biggest highlight has been meeting a lot of wonderful like-minded people.