Aren’t you chomping on the bit to qualify for the 2020 National Snowshoe Championships?

The 2020 national event will be held February 28-March 1 in the famous town of Leadville, Colorado, which is the home of the epic Leadville Trail 100. It will be here before you can say, “Go!” 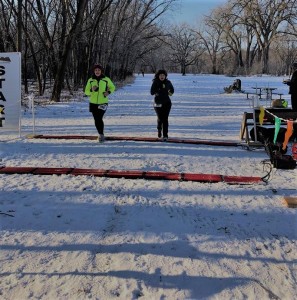 Minnesota hosts the only two qualifiers left in 2019 for the 2020 DION Snowshoes United States Snowshoe Association  Championships. Check out these two 2019 races to get you ready to rock for nationals.

In 2020, there are many other qualifiers—28 with all their data logged in at the USSSA site. Races are held from West Virginia to Alaska, from Saranac, New York, to Phillips, Wisconsin, and Albuquerque, New Mexico, to Sandpoint, Idaho. There are plenty of choices after the new year.

But, go ahead, get in the groove, and qualify early. Join the 200+ trail runners who ran for qualifying on Saturday, November 16, at the inaugural Ritter Farm Trail Runs. 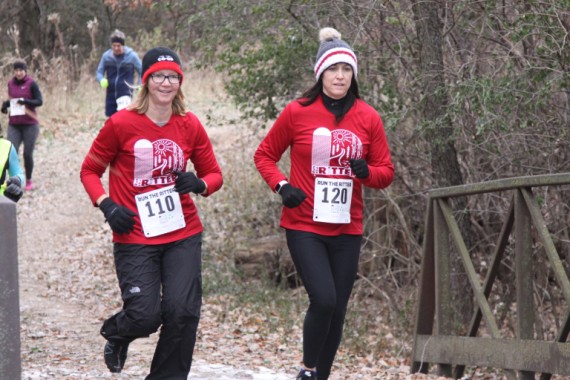 Crossing the bridge near the archery range on the Ritter Farm Race Trails (Yes, there were no arrows this day.) Photo courtesy of Jeff Larson

There, Mason Sullivan, a 14-year-old star, zipped the hilly five miles in 33.14. Plus, Roxanne Ready gave Master runners something to crow about, winning the overall women’s class. The race is a looped course, and some chose to run two or three laps.

There’s no other way to put this, so here it is: Dan Laplante scorched the three loops event with 6:48 miles. Kerrie Rubadue won the women’s class by four minutes. So much fun had by all! 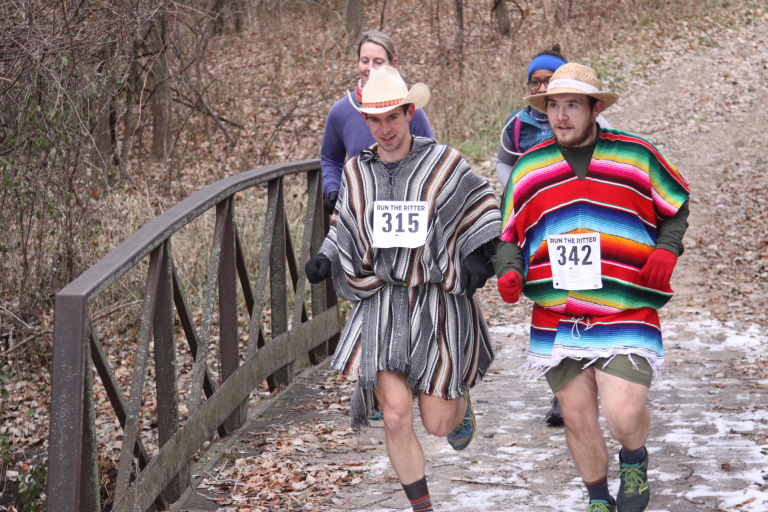 On Sunday, December 8, 2019, the Mendota Trail Run and Snowshoe 5K in St. Paul, MN, will serve as qualifiers for the US National Snowshoe Championships. 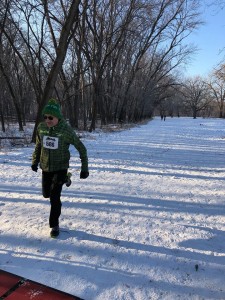 The Man in Green streaks to a 2018 Mendota 5K finish

Many runners in the event will add a second qualifying race to their list, with some racing their first. However, either the trail run or snowshoe 5k qualifies you for the national championship events, and maybe the opportunity to earn it the old-fashioned way by wearing snowshoes.

The Mendota Trail Run and Snowshoe 5K, now in its second year, are a Mountain Goat Running event. Both Mendota races provide funds to help maintain the Ft. Snelling State Park trails. How timely, too, as the park received devastating floods from last season’s heavy snows and rain. Race Director Sam Rush carries years of experience, so the race itself goes smoothly. 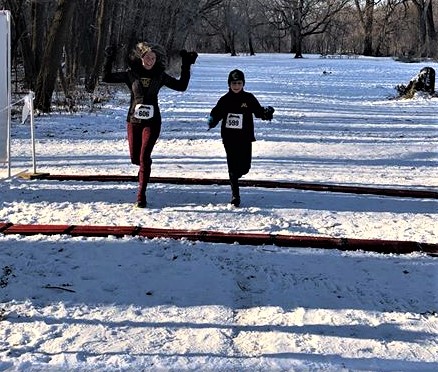 The after-race festivities continue at Lucky’s 13 Pub that serves a grand breakfast with a drink voucher, too. 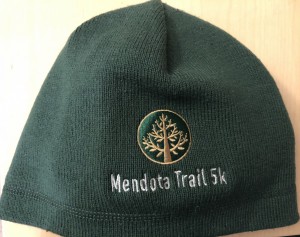 As RD Sam Rush calls it, “A sweet beanie!” and it’s warm, too, with an inner liner.

After finishing, take your swag (including this sweet beanie) and wear it proudly at Lucky’s. Plus, you can wear it at all three days at the DION USSSA National Snowshoe Championships on February 28-March 1, 2020, in Leadville, Colorado.

Don’t miss this chance to race a national qualifier before Christmas and close out the calendar year in style.