Sitting here in Switzerland in the summer, the winter seems a long time ago. It’s more than 30 degrees Celsius (that’s 86 degrees Fahrenheit if you’re in North America) and it’s only 9 a.m. So, a great way to cool down is to look back at some trips around Switzerland and let the snowy landscapes cool the room.

I once made a comment on a Nordic skiing online forum about following a raquette track on skis for a short while.  I got a confused reply telling me that raquette was French-Canadian for snowshoes, which the writer didn’t think were used much outside North America. It turns out that raquettes is just a French word and one used here in the French speaking part of Switzerland. About 20 percent of the country would call snowshoes “la raquette à neige” (French).  About 65 percent would say “Schneeschuhe” (German), while some 7 percent call them “racchette da neve” (Italian). I have no idea what the Romansh-speaking Swiss would say, and Google can’t help me.

When going snowshoeing in Switzerland, the country can be divided into regions. We have the Swiss Plateau, which is around 30 percent of the country and between 400 and 700 meters (1,300-2,300 feet) high.  Snow is scarce in this area.  Although, it’s possible to make the occasional trip, it’s better to look at higher ranges.

The best known area is the Alps, of course: With a high point of 4810m (15,782 ft.) on Mont Blanc (France) and 82 peaks more than 4,000m (13,123 ft.) high. This is a 1,100 km (700 mile) long range of mountains taking in Austria and Slovenia in the east, and crossing Italy, Switzerland, Liechtenstein, Germany and France in the west. There are 48 of the 4,000m peaks here in Switzerland, including some of the most famous summits like the Matterhorn and the Jungfrau.

Often overlooked are the Jura Mountains. The highest point in this range is only 1,720m (5,640 ft.), with most peaks not rising more than 1,500m (4,921 ft.). In fact, due to current geological activity, those peaks are still rising. The range runs along the French-Swiss border with some lower foothills just inside Germany in the north.

On the Swiss side of the Jura there are large towns like La Chaux-de-Fonds, Le Locle, and Sainte-Croix. Actually, these are only large by Swiss standards and are famed locally as the birthplaces of the watch-making industries.  Sainte-Croix is particularly known for musical boxes. What the people living in these towns know is just how cold it can get during the winter. The village of La Brévine earned the nickname “Little Siberia” in January 1987 when it recorded a temperature of -41.8 degree Celsius (-43 degree Fahrenheit).  This is still the coldest ever recorded in Switzerland.

Pictures will tell a better story about the terrain.  I’ve picked out four trips that are local to my house on the plateau, or also known as my mountain chalet. 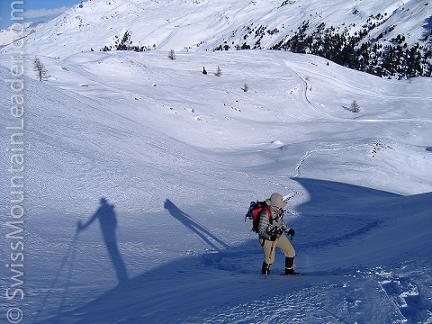 The Swiss Alps range is so big that it can be divided into 20 different ranges.  It then gets confusing, so the Alps are separated into two groups of ranges: the Western Alps and the Eastern Alps. I have a chalet in the village of Zinal in the Val d’Anniviers – located in the Western Alps in a range of peaks known as the Pennine Alps. The Pennine Alps is home to all the big alpine peaks.  Here you will find 41 of the 82 4,000m peaks, comfortably overshadowing all the other alpine ranges.

This is where you come to go high – traveling in the big mountains and glaciers of the Alps. One of the most interesting trips from Zinal is to visit one of the local glaciers. It’s an easy trip up from the end of the village.  It first crosses the small Nordic skiing area, past the old copper mines, and then a direct route to the glacier itself.

Once you get to the glacier you’re in for a surprise. The movement of this glacier has carved out large ice caves at the snout and you can walk right in underneath the tons of ancient ice.

This is an interesting trip, but it’s in the high mountains.  You’re crossing areas of some danger where there’s frequent avalanche activity in the winter and rock slides in the spring (as the mountains begin to warm up). It’s important that you’re equipped for this sort of travel and have the skills to interpret the changing conditions. If you’re in any doubt, local mountain guides or mountain leaders make regular journeys to see the caves.  You can join them either in a group or as an individual. 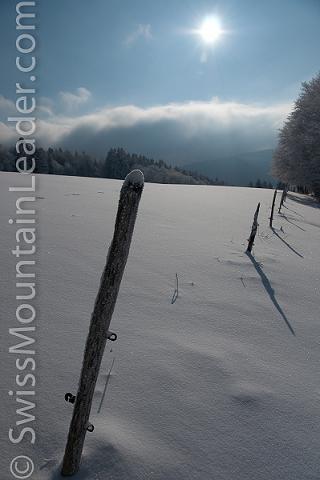