USSSA two-time National Champion, Eric Hartmark, loves his hometown race the Boulder Lake Dion Snowshoe National Championship Qualifier. Even though he doesn’t have to qualify—the current and past USSSA champions win exemptions; Hartmark is both—still, he races it. Why not? A beautiful course cut in deep northern woods, frozen lakes gazing at winter’s sky, rock-and-roll thundering thru big speakers stirring the heart and enthusiasm . . . plus he wins it every time. 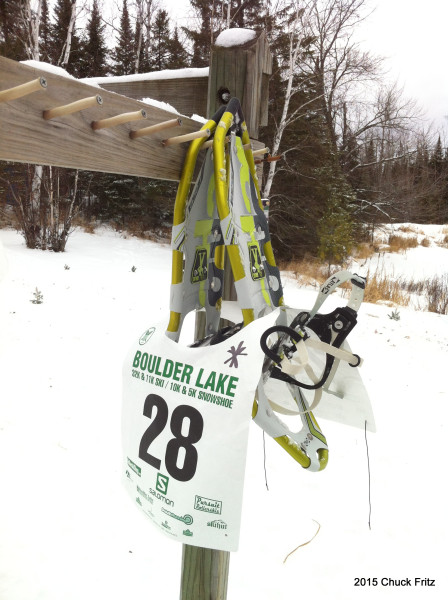 Well, not quite. In 2011 Kelly Mortenson, St Paul’s affable and very able racer beat him. The Frost Gods found themselves so shook over the local hero losing out, they failed to make enough snow in 2012; the race cancelled that year, like many in the region, to the dismay of snowshoers everywhere. The next year Hartmark went on a tear, winning 2013, 2014 and, yes, 2015’s just completed edition.

He said, “Boulder Lake was where I ran my first ever snowshoe race and have tried to make it back there each year since, missing it only once since the World Championships were the same week, and I was out of the country.  They put on a great event at the Boulder Lake Snowshoe stomp.  There is usually a large turnout of people excited and ready to race on snowshoes and skis, no matter what the weather dictates.  This year’s race was the warmest I can remember, as far as the times I have participated.  So, it was nice not to have that extreme, bitter January cold for the race this time.  It was quite windy in the open areas, but once we were back in the woods, it wasn’t even noticeable.

The race started out quickly with Kelly Mortenson running hard on my heels for the first half mile.  We both quickly noticed that the first 800-1,000 meters of the race was not groomed at all.  That was definitely a different aspect to the race as that section is usually groomed beautifully.  On the first downhill of the race, we met up with a new trail that was freshly groomed for the next mile-and-a-half.  Although it was groomed, the snow wasn’t packed nearly as hard as it was last year, leaving the track a bit slower.  There ended up being several soft spots in the groomed trail, where racers unexpectedly found their snowshoes punching through and dropping down a little deeper than they anticipated.  I tripped and stumbled for several feet over one of the soft spots, but was able to maintain my balance and stay on my feet. 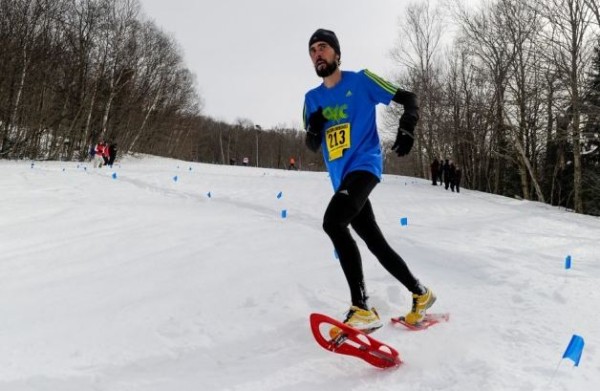 The second half of the loop was a bit challenging to me as the course was supposed to turn to single track.  I quickly realized that there was actually no track at all, as the single track hadn’t been stomped down prior to the race.  It was definitely an added challenge and felt like I was in an orienteering adventure.  I found myself scanning the trees trying to find the small blue ribbons used to designate the course, making me feel like I was wandering aimlessly from time to time.  During some sections, these ribbons were few and far between; I ended up going the wrong way five times during the first loop.  So, I had to backtrack several times, each time thinking I would run headfirst into Kelly coming from the other direction.  I was hoping that no one behind me would follow my tracks that went the wrong way and end up getting lost in the woods.

There was only one time where I actually thought I might be completely lost, but kept running and eventually recognized parts of the course from last year.  The ribbons in that section were missing as there was a giant gap between them.  I think if I hadn’t run that section of the course last year, I would have been out there for a longer time.  I spoke with Kelly after the race and he said that the single track was great!  He said ‘It was easy, all I had to do was follow your snowshoe tracks!’  There were even a couple of added obstacles in the race, as we had to navigate our way over two downed trees across the course.  By the time I ran the second loop, the single track was packed down and much easier to follow.  I didn’t make one wrong turn on that loop.  After the race I was a bit disappointed to see that my snowshoes broke in two different places, so it looks like I’m going to have to find some new ones to wear before Worlds in ten days!”

Mortenson and Nick Nygaard, Duluth Running Company‘s assistant manager and trainer, chased the former champion on the 10km layout, the second year of this full distance. There are two 5km loops and about half-and-half groomed and single-track. Hartmark’s 50:41 put a minute-and-three-quarters on the dynamic duo giving chase while crossing the finish (almost) together. Nygaard in his first snowshoe race recalled chasing Mortenson for the most exciting finish of the day; he learned, “Don’t wear shorts next race! I didn’t expect two things: to be that soaking wet from the snow spray and to have my thighs that sore. From the gun, Kelly went out hard with Eric, but I was able to catch Kelly by about  six km. After closing the gap, we ran stride-for-stride until the finish line with Kelly getting a nice sprinter-esque lean to grab second place with myself in third. We chatted afterward and watched some of the other finishers come in; can’t say I saw anyone finish without a smile. It was a heck of a time out there!” 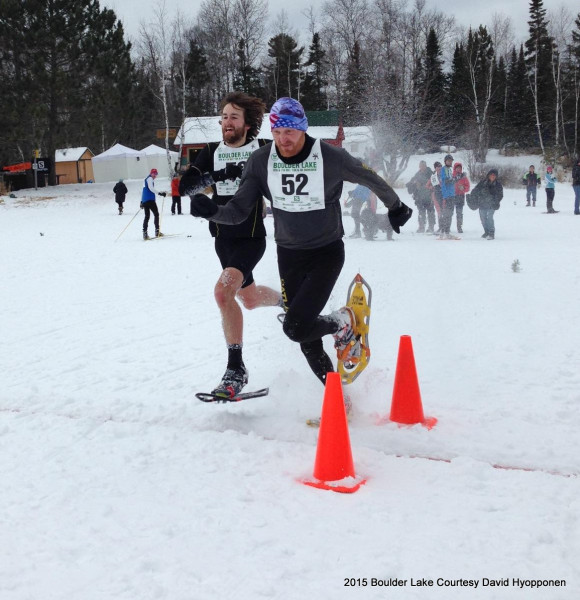 The clock timed them to the exact tenth of a second, a rarity, in the most exciting finish of the day: 52:26.7. Note the ski crowd paying attention to this snowshoe finish!

Dohm explained, “Boulder was my first snowshoe race ever, and it was a great experience. The Run N Fun race team had five people including myself that traveled up for the race, and all of us even managed to qualify for the snowshoe national championships. The race itself was very challenging and was much harder than I had imagined.”

The women’s field found Heather Meyers-Wimer of Hudson, WI.,  grabbing the win and tenth overall in 1:11:03. Promising to be a factor at the Eau Claire championships, she finished last Fall’s TC 10 Mile 21st in class, and 150 overall, a tall accomplishment for that race. Margot Branigan and Emily Renner, both of St. Paul, followed for silver and bronze. Branigan just missed the women’s podium at 2014’s inaugural City of Lakes Half-Marathon, won by Olympian Lisa Uhl, in a tough field. Her Run N Fun team, though, won the Women’s Open for that race. Renner completed the tough, hilly Afton Trail Ultra, July 5, 2014, the hottest day in Minnesota’s winter, with a silver in the women’s class, 29th overall, in 5:06.

But it wasn’t easy. Lindsey Molstad of Duluth pressured Renner, finishing only four seconds back. Molstad claimed an age-class plaque at the 2014 Snowshoe Shuffle in Minneapolis along with racing at the steep Wild Duluth events along with the Superior Spring Trail Races. 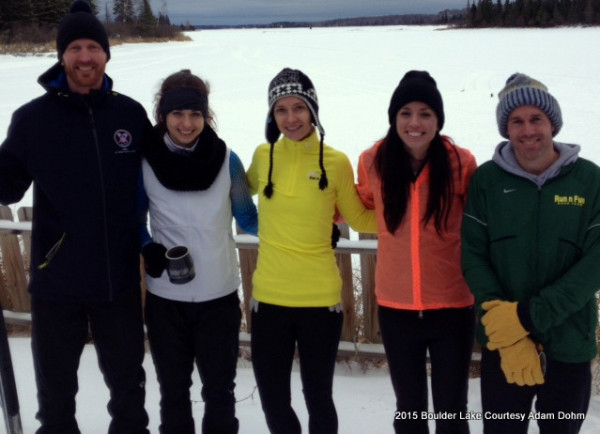 How would you like to ride back to the Twin Cities in this group’s car? From Left, Mortenson (2nd), Renner (3rd), Meyers-Wimer (Winner), Branigan (2nd), Dohm (4th).

Duluth’s Todd Maddox crossed seconds later followed by Joe Winch of Hibbing for an exciting series of race finishes. Maddox raced the Whistle Stop Marathon last Fall with a 7:45 pace for the popular half-marathon. Winch, with three Western States buckles to his name and at least one of those the silver variety, indicating a finish under 24-hours, remains one of ultra distance’s most prolific souls. He is closing in on 200 ultras excluding more than 60 “regular” marathons. Still, this was his first snowshoe race. He said, ” I have a pair of Good Thunder snowshoes won in a race drawing years ago. I learned about the race a couple of weeks before, and when I saw that it was a qualifier for the US Championships, also a reasonable distance from where I live, decided to add ‘snowshoe racer’ to my curriculum vitae. Running in snowshoes is a workout, that’s for sure!

Tania Riske from the 2015 USSSA National’s home, Eau Claire, completed the course in 1:18:34. A tough marathoner, she also runs the 10km in about 45 minutes. She showed her prowess at snowshoeing at the 2014 Athens, Wisconsin, Udder Snowshoe Race, posting an overall win for the women’s class.

Tim Zbikowski turned a tough 1:20, capturing third in class. Zbikowski and Carol Klitzke (see below) publish Cutemoose.net, providing important details on Upper Midwest snowshoeing along with the Braveheart Snowshoe Series, one of the largest in the country.

Racing his second qualifier of the weekend, Chuck Fritz drove up from the Winterrific in the southern part of the Twin Cities, via the Mall of America. His family made a weekend of it, traveling with him from their home in Clive, Iowa. He raced their half-marathon in 2:12, completing Boulder Lake’s 10km a few ticks over 1:23. Continuing to tune-up for Eau Claire’s national championship, Fritz will race the Phillips Flurry next and maybe at Noquemanon, too. 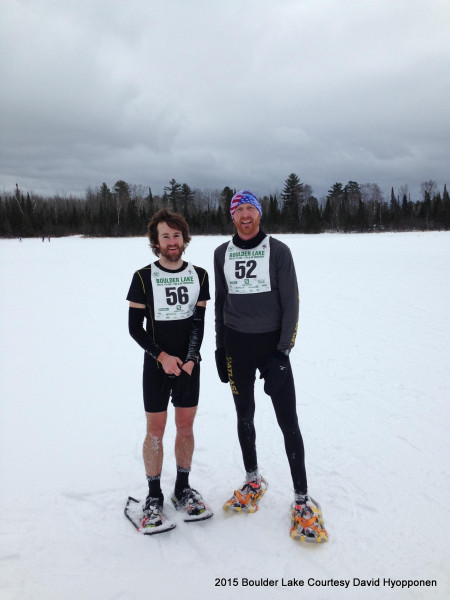 After their epic battle: Nygaard and Mortenson

The 5km found an all-female field. Liz Nelson, Duluth, took the win in 44:30 with Brooke Maddox followed in about five minutes for silver. National USSSA Competitor and medalist, Carol Klitzke, finished out the podium.

Nationally ranked Ed “Records” Rousseau turned in a terrific performance at Boulder, one of his favorite races. Rousseau earned an induction into the Minnesota Running Legends and the Upper Michigan Road Runners Club Hall of Fame. He owns 14 National Masters Running Championships, 14 US Masters Running Records along with completing all 31 Twin Cities Marathons, all 23 FANS 24-hour Races and, in his spare time, finished fifth in his age group for the Masters World Championship Marathon. Oh, yes, he is fast on snowshoes, too.