Snowshoeing in Southern California could be likened to surfing in Siberia. It’s possible: Russia’s Far East has miles of coastline and Southern California has mountain towns with four full seasons of weather. In fact, consider the following scenario: a quiet valley at 7,000 feet, peaks and ridgelines soar 3,000 feet higher, 300+ days of sunshine, enough weather to deliver on average 64 inches of the white-stuff every winter, a lively snowshoe scene, and a fair amount of laid-back locals. Add in that downtown Los Angeles is only 150 miles away.

Sound far-fetched? It did to me when I first moved to California from my hometown in upstate New York. Because I pined for winter every December I visited the small communities that lined the San Bernardino Range, including Big Bear Lake. And in 2002, when my long weekends away from city life in LA no longer sustained me, I decided full time residency was a better option and moved. My obsession with snowshoeing quickly followed.

I find myself mid-morning driving a lonesome stretch of road that borders Big Bear Lake’s north shore. Empty lakefront homes dot the shoreline and I don’t pass a single car on my way to Fawnskin, an even smaller community across the lake from Big Bear. I find a pullout on Grout Bay that provides easy access to Gray’s Peak trail. It’s an unseasonable 53 degrees and I strip down to a tank-top. I side step a medium-sized snow bank to stand on a plank of snow that extends away from the road and up into the forest. I’m careful to access the trail at a point where I can avoid a habitat closure for Big Bear’s wintering eagle population. 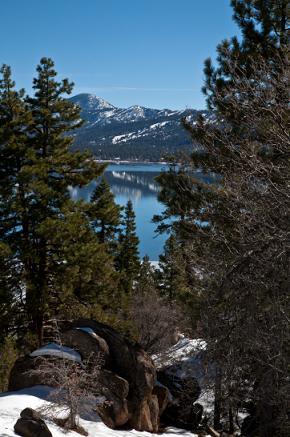 A single puffy cloud hangs high over the lake as I climb. The trail is easy to find because it is stomped flat by snowshoers who’ve passed before me. I follow their tracks, continuing to ascend as they switch west then east before crossing a side hill and leveling out. Mostly in the trees, the trail delivers occasional views of Grout Bay below me. In the distance is Big Bear Solar Observatory and Sugarloaf Mountain, which stand sentinel at 9,938 feet on the Big Bear valley’s southeast end.

The snow is wet and heavy and air temps feel like a day at the beach when there is a steady off-shore breeze. It cools my exposed skin and I kick it up a notch. I like the extra effort. While there is plenty of evidence that other snowshoers have tread before me, I enjoy my time alone in the forest. I talk to no one except the older couple that stopped to ask for directions to Los Angeles before I left my car. I secretly hope not to meet anyone else on today’s adventure.

Lost in my breathing I don’t notice the end of the packed trail until I am upon it. From here I break trail. I’m happy to do my time stomping for others. I’ve enjoyed the fruits of their labor and now take my turn. I bike Gray’s Peak trail regularly during warmer months and know its general route. My familiarity with it is confirmed by the slight depression the trail makes in the snow but pay closer attention to my efforts. 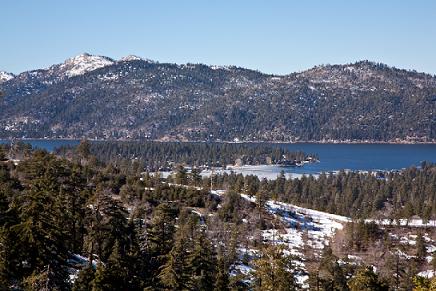 With my pace slower, I notice that I am crisscrossing the faded paw prints of a large animal. I wonder if it is a black bear, temporarily awakened from its slumber, or the sign of a mountain lion residing in the area. I like that a snowy landscape delivers insight to the daily lives of forest creatures but I’m alone, not terribly tall and decide to keep an eye on my surroundings. While I’ve encountered bears in our forests on numerous occasions, I’d rather keep my mountain lion encounters to zero.

An unburied boulder offers a lofty view of where I’ve come from. Not bothering to remove my snowshoes, I carefully climb on top, cringing at the scraping of the metal teeth below my boots. I take a picture, grab a drink of water and climb down. It’s here that I lose the trail entirely. Rather than backtrack, I decide to pursue a steeper pitch and more direct approach to reach Gray’s Peak. At the summit I enjoy stellar views of the Lake, a look at Bear Mountain and Snow Summit’s groomed slopes and a nice resting spot before I head downhill. In the silence of the summit, I grow to like snowshoeing a little more.

While skiing and snowboarding have dominated Big Bear’s winter recreation scene since the 50s, the last four years here have seen an increase in interest for the sport of snowshoeing. Perhaps in part because the Valley’s plethora of biking and hiking trails transform easily for snowshoeing, and perhaps because every February Big Bear hosts a race named “Snowshoe the Bear.” This translates to: You don’t always have to go it alone or opt to bring a friend along for company. There are now plenty of organized snowshoes in Big Bear. 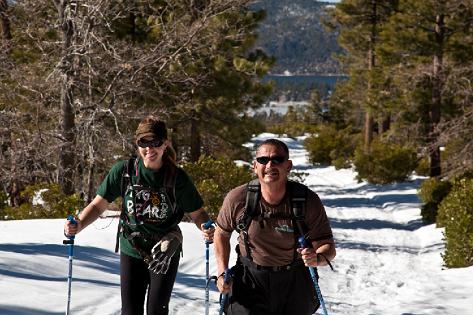 In fact, once a week I find myself in the company of other race enthusiasts. Mountain Fitness, a local gym owned by adventure athletes Ted and Heather Devito, offer weekly training sessions divided into readying yourself for either the 5k or 10k, or introducing the sport to newbies. There’s also a monthly full-moon snowshoe organized and led by Paul Romero and Karen Lundgren, local adventure racers best known for their May 2010 summit of Mount Everest with Paul’s 15-year-old son, Jordan. Paul and Karen make it fun, competitive and a good excuse to drink hot toddies mid-week.

I join Mountain Fitness trainer Toni Gerlette and four others on a Tuesday afternoon jaunt. We follow the 10k route as it climbs Forest Service Road 2N08 away from the Big Bear’s village shops towards the Valley’s southern ridgeline. The beginning of the course quickly gains elevation before mellowing to an easier cross-country trek west. We stop for breaks along the way and talk about life in our mountain town. I walk with Ray for awhile. He admits he never dreamed of snowshoeing while he was growing up in an unincorporated area of Los Angeles’ San Gabriel Valley. Now he’s a regular on these weekly Mountain Fitness hikes.

On our way down we cross paths with Adam Williams, winner of last year’s 10k. He’s running but stops to say hello. His conversation is reduced to easy, single-syllable words before snowshoeing off, gaining speed as he rounds a corner. As we reach the trailhead we pass another group of snowshoers. They are first-timers. Initially awkward, they rapidly gain skill as they push higher.

I say good-bye and hurry to my car, hoping to reach the bank before it closes. The sun has lowered in the horizon and the Lake’s earlier icy surface has changed to open water. Standing at the back of my Subaru, I release my snowshoe straps and free my feet. A peloton of cyclists – perhaps taking similar advantage of our warm day – cruises by reminding me I still reside in Southern California. 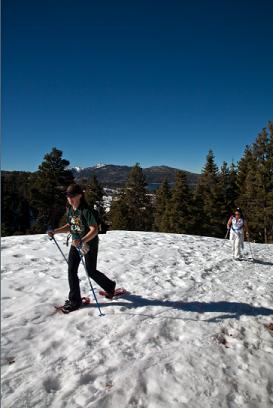 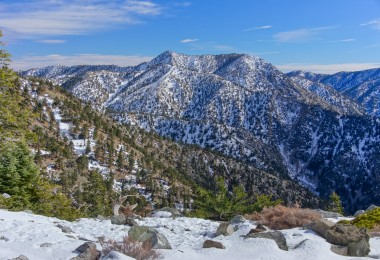 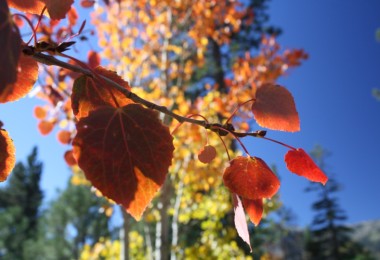 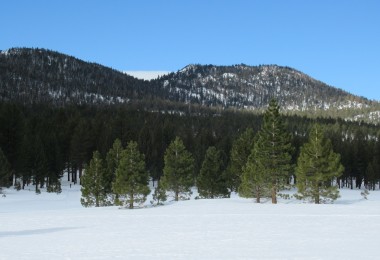 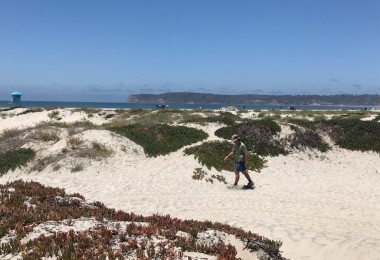