You never need to wander too far in Devon to find a secluded lane or two. Seasons and locations don’t really matter, there’s something soothing about a country lane. Just you, the wildlife, the scenery. And the scenery takes a lot of beating. Imagine an autumn afternoon. Leaves are starting to turn russet, yellow and deep red. The temperature has chilled some, and the extra layer of clothing is appreciated.

There’s still enough bright sunshine. Sufficient to keep spirits up as you set out on an afternoon’s wander. So, where will you go? Well, here’s two suggestions: Iron Mine Lane and Lake Lane in west Devon. Two perfectly good starting points. Neither is beyond the bounds. Both have gradients, but neither is too steep. And they run virtually one into the other. But be aware of the main road towards Burrator that splits them. 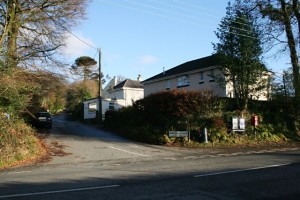 Hiking boots and warm clothing at the ready, I-Pod suitably armed – how about some Andrea Bocelli – here we go. Both lanes are easily walked in an afternoon, so no need to rush. If mixed woodland and wild hedgerows are your preference, you’ll find plenty here. Take binoculars and a camera too, as you never know what might appear in the distance. And there are plenty of photo opportunities.

The great thing about both lanes is their lack of traffic. Sure, you may meet the odd tractor or someone on horseback, but nothing major. Iron Mine Lane, however, does have private houses so expect the odd car or two.

Despite this brush with civilization, both lanes make you feel at one with nature. Not surprising as Iron Mine Lane is on Dartmoor’s edge. Up near the top end, where a narrow track splits to the left, you get a real idea of how wild and beautiful this part of west Devon can be.

Head further down and you’re into well established woodland and limestone walls so inherent to the district. A little further and your only clue to all things bovine is a single cattle grid. There is, however, a path and gate to its right. As you proceed, the lane becomes a little more residential until you arrive at the road to Burrator and Meavy – a national cycle route. To the right is a delightful fenced wood. Well worth exploring.

Lake Lane is narrower – so be aware of any possible traffic – but nonetheless possesses the same feeling of being at one with nature. After passing a number of houses, you’ll find a few gates on the left which give a wonderful panoramic view of the moors. Up till now, it’s been mainly downhill, but a little further on, after a few gentle twists and turns, the lane starts to climb.

To the left, you’ll pass a farm and a short distance later is a private driveway that doubles back. Here, you will be rewarded with a spectacular view of Dartmoor’s rolling hills and surrounding moorland. A great place to catch your breath and take in the scenery.

A few hundred yards away is what’s left of a bridge, the remnants of the former Plymouth – Dartmoor railway line. A short distance further and to the right you’ll see a view of the distant tors that Devon is so well known for. You’re now on the home stretch downhill towards the main road to Yelverton.

And that’s the great thing about this part of Devon. You’re never too far from civilization. It doesn’t intrude, it just exists quietly in the background. And within a few short miles you can forget all about it and just absorb the beautiful surroundings. For more details about touring Devon, go to www.visitdevon.co.uk.