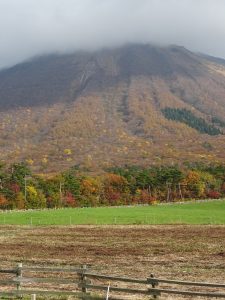 A vertical cliff on Mt. Mitoku grasps Japan’s “most dangerous national monument,” which is how government tourism officials describe a wooden temple whose actual name is Nageiredo. Built without nails, Nageiredo balances on roughly hewn timber stilts on the edge of a cave in the middle of a craggy precipice. No one knows who constructed this unique cultural artifact and how they built it 1,300 years ago. A local legend explains that a monk with mystical powers threw the temple onto the mountainside. Mere humans cannot get closer than approximately fifty meters. Nageiredo exists for the sole use of mountain gods. 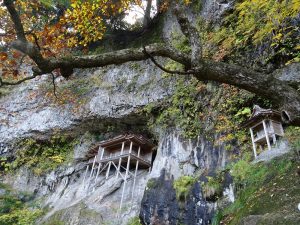 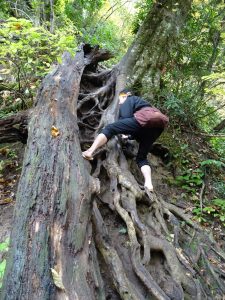 You need not be a godlike hiker to visit it, but out-of-shape or acrophobic travelers should think twice before attempting to approach Nageiredo. Scaling the steep trail often requires grasping winding tree roots, long metal chains, and jutting rocks. The earthen path is slippery in many places. Occasionally, climbers have broken bones or died after slipping off trails—but the climb is worth the risk. You’ll pass through the same invigorating mountainous forest habitat that monks and pilgrims have been traveling since the year 706 when Priest En No Gyoja founded Mt. Mitoku as a Shugen-do religious site. Both Mt. Daisen and Mt. Mitoku became active centers of Shugen-do in Western Japan.

Sometimes simplistically described as a “mountain religion,” Shugen-do uniquely combines Buddhism, Shintoism, local folk beliefs and nature worship. Shugen-do priests since the first millennium have embraced ascetic practices. Many rejected materialism and lived austerely in the mountains. Meditating under waterfalls during winter was common—some ascetic Buddhists today still do. Others, living on what they gathered in nature, meditated in caves. Shugen-do priests were also formidable warriors who protected their mountains, valleys, streams, waterfalls, and other sacred spots from opposing religious factions as well as the ravages of industry.

To embark on a pursuit of spiritual purity or to just enjoy the incredible vistas and nature of Mt. Mitoku, begin your trek at Sanbutsuji Temple, located an hour drive from tiny Tottori Airport. Temple priest Yoneda Ryojun, who also guides (Japanese language only), visitors up the mountain, explains that focusing on nature is like experiencing Zen, and all life springs from nature. He advised visitors to go to the mountain to show appreciation and give thanks. Each step to Nageiredo, he adds, is a step toward purification. He invites climbers to chant “Sange, sange” (Repent, repent!) “Rokkon shojo” (Purify the six senses!) as they move up the mountain. The six senses refer to the tongue, nose, eyes, ears, body, and mind. 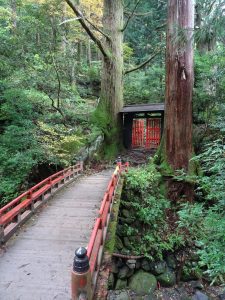 Before heading up the trail, a gatekeeper at the entrance will inspect your shoe soles. Climbing alone, without proper footgear, and in inclement weather are all forbidden. For seven hundred yen (about six US dollars), you can purchase sandals of woven straw, which one hiker swore gripped the path more firmly than modern hiking boots.

You do not need a guide, but without one, you will miss the stories that weave history and the forest trail you walk, bordered with carved stone religious statues covered with years of green moss, weather-stained wooden temples, and native ferns, shrubs, flowers, and trees, into a tapestry of culture and nature.

A guide will teach the proper way to swing a wooden beam into the side of a person-sized bell suspended along the path by thick crossbeams. The sonorous vibrations inform the mountain gods that you are approaching—striking the bell is great fun. How monks carried a two-ton bell to one of the high mountain temples along the route is an unfathomable mystery. 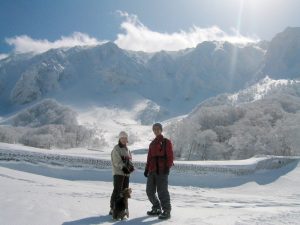 The trail ends at the vertiginous 90-degree bluff where Nageiredo Temple is impossibly perched, like a swallow nest on a cliff. If allowed, only expert rock climbers could enter this national treasure of Japan. Take a rest, look around at the scenery of undulating mountains and valleys, and snap some pics before carefully descending.

After exploring Mt. Mitoku, try the Tottori après workout activity of soaking aching muscles in a steamy hot spring and then restore your energy with succulent crab and other seafood from the blue depths of the nearby sea and with mouthwatering yellow pears, brown shitake, and colorful produce from local farms and fields.

The nearby hot spring town called Misasa Onsen includes enchanting cobblestone lanes, retro-style street lights, and artistic shops and galleries. This 800-year-old town waits between Mt. Mitoku and Mt. Daisen. Misasa Onsen is a great place to let your hair down—Japanese style. Both men and women can enjoy river viewing and bathing nude inside of a highly visible outdoor rock-lined bath next to the town`s central bridge. After climbing in the footsteps of ascetic monks, you might want to experience other aspects of Japanese culture—the hedonistic practices of luxuriating in thermal mineral water and stuffing oneself with gourmet meals. If you are shy, bathe in a beautiful hotel. 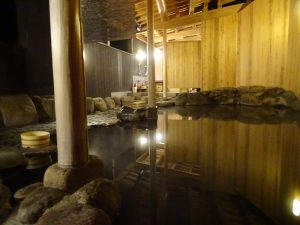 Ryokan Ohashi, one of the most famous and elegant ryokan, a Japanese inn, in Misasa, is a nationally registered cultural property. Master artisans used timber from neighboring forests. Townspeople have built or renovated luxurious ryokan alongside Misasa’s gently splashing river.

The whispers of water tumbling over rocks, and the romantic calls of night birds and frogs slip between the panes of glass that separate guests in their warm rooms from the night air. Don a loose Japanese yukata (a light gown) and walk through the luxurious hotel to the baths. During the day, men are asked to bathe in one bathing area while the other is for women. At night, the designations change so that men and women can enjoy both areas during their stay. A steamy indoor room with rocky baths is one bathing section. The other has indoor baths and an outdoor bath made of aromatic cypress. Both facilities are spacious and luxurious. While you are bathing, hotel staff will lay traditional soft Japanese futons on the floor of your room.

After bathing, feast on the gourmet art of Ryokan Ohashi’s top chef, who has received some of Japan’s highest awards for Japanese cuisine. Choose to enjoy your meal in your spacious room or to dine in private grand and elegant banquet rooms. The menu is mouthwatering. The presentation is creative. For instance, waitstaff briefly extinguish the lights before carrying illuminated bowls of fresh crab to your table. In the dark, the glowing bowls symbolize fishing boats drifting at night on black seas. The lighting, though, is soon restored so you can savor a seemingly endless selection of exquisite Japanese dishes with your eyes and mouth. 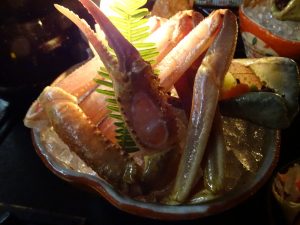 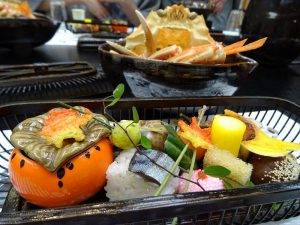 After a deep sleep, a morning bath, and a sumptuous breakfast, you must face difficult choices: walk along the river, take more leisurely baths, drop into art galleries, or eat more local dishes.You could also go hiking or snowshoeing with guide Richard Pierce in the nearby fields, hills, and mountains.

Less than two hours away by car, Mt. Daisen presents another fantastic option. Viewed from the south, Mt. Daisen looks like a sibling of Mt. Fuji. In winter, gently ascending slopes soar from an almost round base to the 5,672-feet-high crown of pure white snow. In autumn expect a kaleidoscope of fall colors. Every season decorates Mt. Daisen differently. 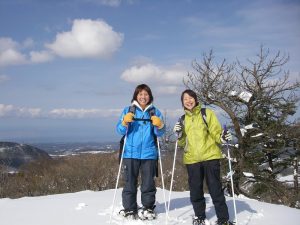 Like Mt. Mitoku, Mt. Daisen’s history and culture include nature protection, regional cuisine, warrior monks, and fascinating spiritual beliefs. For more than a thousand years, religious rules, which even applied to the emperor of Japan, forbid going to the peak of Mt. Daisen. Villagers, monks, and other locals feared a demon that guarded the mountain. Stories said it would tear intruders apart with its sharp beak. The demon served gods that lived in the crown of the mountain.

Until the late 1800s, just four Shinto priests a year were allowed to climb to Mt.Daisen`s peak, but this was permitted only for a religious ceremony named Oyama No Mohitori. Carrying wooden buckets on their back, the priests trekked toward the summit, where at a sacred pond they collected medicinal herbs and filled the buckets with water. They carried the holy water downhill to Ogamiyama Jinja, an ancient shrine built for worshipping Mt. Daisen. Shinto priests today continue the water collecting ceremony every July 15. 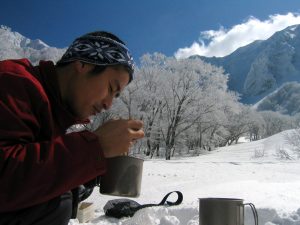 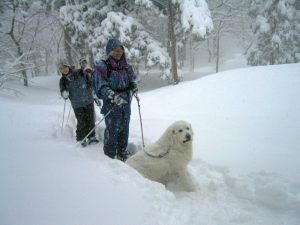 When Mt. Daisen was a thriving center of Buddhism, temple priests held great power. Their followers built over 100 Buddhist temples. Thousands of warrior monks resided in and around Daisen Town. However, in the late 1800s, many Buddhist temples across Japan were burned during a period of government persecution of Buddhism.

Around the same time, a Japanese newspaper company sent an expedition to Daisen’s summit. The mysterious forests, filled with wild animals and imagined mythical beasts, scared off all but two climbers. Today, though, hiking and snowshoeing trails connect the scraggly rocky peaks of volcanic Mt. Daisen with Daisen Town and small hamlets. Perhaps, the mountain demon moved away.

Just 100 residents live in Daisen Town today. The small number of remaining shrines and temples are invaluable cultural treasures in the middle of alpine meadows, waterfalls and rivers that you can drink from, and almost certainly the most abundant natural beech and cedar forests in Western Japan. 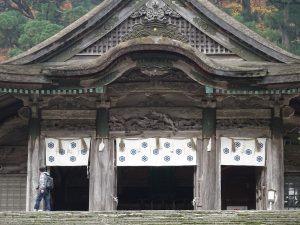 If interested in Zen Buddhism, book a room at a four-hundred-year-old temple inn, Sanrakuso Inn, for basic accommodation, a unique cultural experience, and one of the best locations for hikers. Sixteenth-generation Zen monk Goken Shimizu and his wife serves shojin ryori. That is Japanese for simple meatless Buddhist dishes, like the ones that mountain pilgrims and monks have been traditionally eating for many centuries. The ingredients include mountain mushrooms, herbs, and local vegetables, Wake early to join the six a.m. meditation session. Sanrakuso Inn is within minutes from hiking trails, Daisen Temple, and Ogamiyama Shrine. When snow piles up on the trails, guests can borrow snowshoes, and the monk might even take you on a snowshoe trip around Daisen Temple and Ogamiyama Shrine.

Walk along sacred Sainokawara, a river of clean rainwater, spring water, and melted snow that sparkles and slides down Mt. Daisen to the sea. Long ago, Sainokawara was known as the river that separated earth and heaven. To protect the spirits of recently departed children who were in limbo between heaven and earth, parents built triangular cairns with riverbank stones. Even today, you might discover a just-built riverside rock cairn with a child’s doll or toy left at the apex. 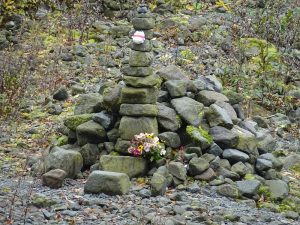 Winter drops layers of fluffy white snow on the dark brown thatched roofs of centuries-old weather-worn wooden temples and shrines. Trails curve around snow-bent birch trees in woods so silent that you can hear snowflakes brushing your jacket. You might think that the mountain is like a vast open chapel.You can feel why people worshipped Mt. Daisen.

Considering it’s small population, Daisen Town has several impressive snowshoeing guides and winter sports facilities. Mr. Kuruma is recommended because of his encyclopedic knowledge of local flora and fauna. Ask for him at the Daisen Information Center (81 0859-52-2502). The name of largest outdoor sports company in the area is Mori-no-Kuni, which translates as Kingdom of the Forest. Mori-no-Kuni offers many tours, including snowshoe tours.

Mt. Daisen is included within the much larger Daisen-Oki National Park, which has ski resorts, campsites, horse riding facilities, bicycle trails and much more for outdoor sports enthusiasts. Many regions of Japan offer the same opportunities for sports, but only remote Tottori prefecture provides these activities in the midst of such a rich physical environment and cultural heritage.

To experience the mountains of Tottori, book a flight to Japan! 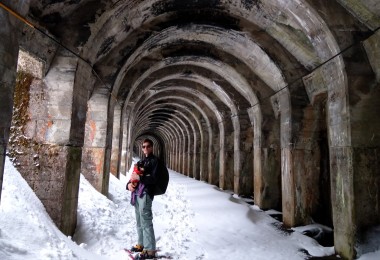