Switzerland. You possibly couldn’t find a more diverse climate or landscape in such a relatively small area. Despite this, its ski resorts attract tourists in droves for the dramatic alpine scenery, après-ski and numerous lakes. One of its better known, Lake Geneva, is just 30 minutes west of Leysin. This beautiful resort is home for Ian Spare, a member of the British Association of International Mountain Leaders (BAIML), and his partner Julie.

In such idyllic surroundings, my first question had to be was it this that attracted them to such a peaceful part of Switzerland? 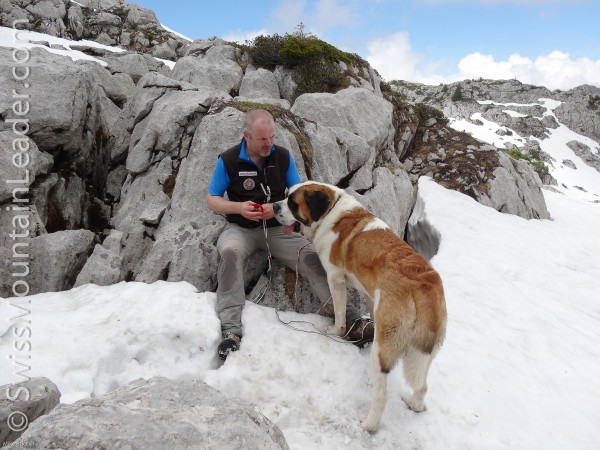 “We’ve lived in Switzerland for quite a few years. We’d had a house near Fribourg and a mountain chalet in Zinal in the Val d’Anniviers. About four years ago we decided to move to a single base and were looking for a good location. I knew the late mountain guide, Roger Payne, who was based in Leysin and he’d spoken about how great the location was with its easy access, good transport links and good quality of life. So it was on our shortlist. There’s a mountain railway from the valley and it’s under two hours from Geneva Airport and about the same from pretty much any city in Switzerland.”

“When we saw a B&B for sale it looked like an ideal base. By coincidence I’d ﬁrst visited Leysin many years before when I’d worked in Germany, and we’d come here for an ofﬁce ski trip. Later I’d been here for avalanche safety training with Roger and his wife, Julie-Ann Clyma. But, I knew the area pretty well. I’ve climbed, skied, biked and snowshoed around here for years.”

“Even so, it’s surprised me. The ﬁrst few weeks I was just stunned by the views we get over to the Dents du Midi and across to the glaciers. But that’s normal. My neighbour was born here and still stops mid-sentence to admire a sunset.”

“It’s a year round place, we’ve some international schools and their presence keeps the village vibrant in a way that other alpine villages often aren’t. I can go out for dinner mid-week in October, and still have the choice of 10 or 15 restaurants. The shops are still open and I can even go and see a ﬁlm.”

With its roots in the Middle Ages and part of the Swiss Heritage Site, Leysin has a lot of local history attached. Was this part of its appeal?

“Thomas Malthus, the British political economist, noted back in 1789 that the inhabitants had a long life expectancy compared to elsewhere in Europe, which he explained by the climate and isolation. The original inhabitants had ﬂed the Roman occupation and Leysin wasn’t an easy place to get to then, so the Romans hadn’t pursued them.”

“After Malthus had put Leysin on the map, it started to get visits from people with TB and lung complaints. When Dr. August Rollier arrived with his sunshine cure it turned into an industry. This was back before the mountain train. The patients would take four or five hours in winter to get here from the valley on horse-drawn sledges. It’s a wide sunny valley, quite unusual in the alps, so we get a lot of sunlight and now people on holiday can try their own ‘light and air’ cure.”

“As an International Mountain Leader I’m fascinated by the history of region and the culture. And of course the clients and groups I work with are just as interested, so they look to you for that insight. It’s Switzerland though, mostly it’s all about the cheese.”

It’s always interesting to know a person’s background, no matter their present occupation. Before becoming an International Mountain Leader, what were Ian’s roots?

“I’ve been a hiker, climber and skier for all my life. I’m from the Peak District in the UK and back when I left college I was a climbing instructor for a spell. I always intended to return to that, so when I got repetitive strain injury from too many years in an ofﬁce using a keyboard, it seemed natural to return to that. To become an International Mountain Leader obviously requires some technical skills. But it’s mostly about having enthusiasm for being in the mountains and having experience, so it was a natural fit.”

Leysin attracts hikers from around the world. With such a huge culture mix, I asked him if there were any particular characters he had met who stand out.

“We get some interesting people passing through, particularly at the B&B. We’ve had an older Swiss gentleman here who was originally here when he had TB as a small child, at the age of four or five. He’d had to spend a year here, seeing his parents only once or twice. I get clients from places where they never see snow.”

Ian’s work as an IML takes him to France. Did he find a big contrast in culture between the two countries when it comes to hiking and snowshoeing?

“In the high mountains the border is just a line on a map so it’s not a big deal. I go to Chamonix a lot and you can’t fail to be impressed by the mountains. It’s a mecca to the world’s climbers and mountaineers for good reason. But, after travelling in mountains all over the world after a while, it’s the similarities that I see. The way of life, the agriculture especially is quite similar all over the alps, and each valley is as different as the next, regardless of where the border is.”

With such a relaxed atmosphere for hiking, have there been any times when you’ve needed to go to anyone’s aid in the hills?

“When you’re working you’re quite visible normally. We’ve a recognised badge so people see it and ask for help. So I see a few minor mishaps and quite a few lost people of course.”

“A couple of years ago, I was out with a private client in early season in some awkward terrain with a lot of ﬁssures in the limestone. We call it ‘lapiaz’ in the local dialect. There was still a lot of snow, and some of it covered some of these holes, so it was challenging and needed a bit of care. We met a couple of Dutch guys who’d run into trouble when a snow bridge collapsed and one of the group had fallen into the deep hole underneath. My client and I arrived just at the right time and, seeing my badge, they turned to us for help. I was working in difﬁcult terrain so I’d a variety of gear in my bag to do a rescue: ropes, slings, carabiners and so on. So, I was able to drop into the hole, rig a rope, improvise a hoist and we pulled the victim out.”

“The punchline? The victim was an 18-month-old St. Bernard dog belonging to a local farm who’d followed the hikers. He’d never have got out on his own and at 80-100 kg, I doubt anyone would have got him out without a rope and some skills in vertical rescue. Funnily enough, I go to L’hospice du Grand-St-Bernard on an overnight snowshoe trip all the time and visit the kennels, so it’s the only dog I know the age and weight of at a glance. And, of course, the St. Bernard dog is supposed to be the one doing the rescue.”

With their own B&B – Chalet L’Epicea – in Leysin, I suggested that running that and taking people out on hikes must be quite a juggling act. Did the couple ever find time to unwind?

“Actually, I think that would be impossible. The B&B is largely run by my partner, Julie. I do make the jam using the soft fruit this region is renowned for, but the day-to-day operation is all Julie. In the summer I like to get on my mountain bike, and in the winter I’ll go and ski. Right now, it’s spring and I’ll be enjoying some ski touring on spring snow. So, I suppose I just do more of the same.”

“There’s a lot to do in the area though. The lake is close by, and each year there’s the international music festival at Montreux. So, right now, I’m looking forward to seeing what the line-up will be this year.”

Most forms of work have challenge and variety. There can’t be that many that include “stunning scenery” in the job description. But this is where both Ian and his partner are fortunate.

For further details on Ian’s work go to www.swissmountainleader.com. For more information about mountain leader training, go to www.baiml.org and for more details about Ian and Julie’s chalet in this beautiful part of Switzerland, visit www.epicea.ch.