Jan. 17 – I hiked into Chilkoot Lake with a friend. The snow had a crusted surface this morning, which made it easy to walk on, so we did not need snowshoes.

The lake has a small opening near the mouth of the river the rest is under the cover of thick ice. We continued passed the opening, into the campground for a quick look, and started back out the trail. Jan. 24 – Climbing up Mt. Ripinsky Race Trail I encountered several icy areas that I had to maneuver around on the steep slope. I continued up to the halfway mark before deciding all of the ice made it unsafe to keep going.When I started back down I went around the same ice I had just climbed pass. I am not sure how I did it, but I got off the trail. I think I became over-confident and didn’t pay enough attention to my whereabouts. I soon found myself climbing down a steep section. It began to get steeper and I came to a rocky bluff. I sat down in my snow pants and slid, as I held on to tree limbs and roots, lowering myself inch by grueling inch around the bluff.

When I reached the bottom, I saw two huge, dark caves that ran back into the rock. Of course, my brain immediately thought of bears in hibernation. I called Jake to me and slid passed the two gaping holes without looking in.

Finally! I reached the bottom thirty minutes later, but where was the dirt road that the trail brings me to? I remembered what my Dad told me when I was a kid. Keep going down and eventually you will find a road or creek to follow out of the trees. I knew the general layout of the area and eventually I walked out onto the road, only 20 yards from where I parked my truck.

March 3 –  I took a trip out the Haines Highway to fish for Dolly Varden, it turned out to be one of my many picturesque trips. The snowcapped mountains and Chilkat River glistened in the sun with a backdrop of blue sky, making it a perfect day to be in the outdoors.

A week of sunshine and temperatures warm enough for a lite sweatshirt brought out many anglers to try their luck. Not only was the river full of Dollys, the Steelhead were running too.

At 20-mile, I pulled the truck into a plowed area and from there we walked up the road a couple hundred yards and then crawled carefully down a steep bank full of thorn bushes and deadfall. After reaching the river flat, we walked on ice and snow until we reached the river.

Halfway across, we looked back and watched a moose as it cautiously stepped into the willows for cover. Upon reaching the other side, I stood there on the edge of the river preparing my fishing rod with a lure. I felt blessed to be standing in the middle of some of the most beautiful country I have ever laid eyes on.

I turned to cast my line and looking up I could see three Trumpeter Swans flying low and directly at me. I quickly placed my pole on the rocks and reached for my camera. I stood up just as they flew over and snapped the only picture I had enough time to take. With all of the open water this winter, the swans seem to be out in abundance enjoying the mild weather too.

After fishing in the same spot for over an hour and not catching anything, we picked up the tackle and began walking down river to a deep hole where I saw others fishing days before.

As we got closer there was a big brown heap lying on the ice at the edge of a pool. At first, I thought it was a stump, and then it popped its head up for a look and quickly slithered into the water. It was a river otter enjoying the warm sun too. We continued fishing for a while and keeping watch, with such a warm day he would surely be back out. Thirty minutes later, the otter came back up for a second look.This time he crawled onto the opposite bank and rested in the snow where he could watch us. I quickly sat down on the rocks and steadied my camera for a couple of long shots. The otter graciously rested in the snow and provided me with a few pictures of its sleek, slender body as it lie there in the snow. A Bald Eagle flying over the river.

My dog (Jake) had a good day too, although each time we moved to a new spot to fish, he would jump in the water for a swim. 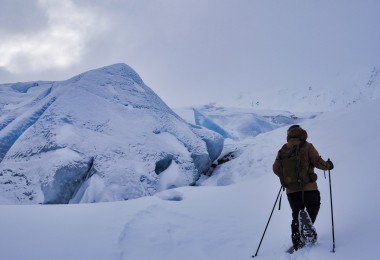