50 seemed to be the magic number for the 2008 Fairbanks Snowshoe Classic. It was 50 degrees warmer than last years race, 18 F degrees above zero this year, a virtual heat wave in Alaska . . . and the 10KM runner-up in the men’s race celebrated a fiftieth birthday! And took him some hardware as a present, too. Although there were not 50 racers, the group that showed had enough enthusiasm for a hundred.

For the third year in a row, the only Alaska USSSA qualifier was held on a two lap course traversing the trails at the University of Alaska – Fairbanks. The event is one of the five Finnish Line Snowshoe Series that dictates the snowshoe racing season in the region. Three out of the five races on that schedule were run when temps were minus 20 and below. Today’s race, at a cozy +18 F, led Race Director Chad Carroll (see picture) to quip, “I guess that when the temperatures rise above zero, Fairbanks snowshoers are out enjoying other outdoor activities” as his group thinned from recent years. Hardy bunch, these Alaskans . . . 18 above zero is too HOT to snowshoe race.

Chad, the gold medalist in his age category at the 2007 National Championships, described the race like this: “The lead pack of 4 men — myself, Kevin Brinegar, Zach Ginn and Roger Sayre — led the race from the start (Kevin was the bronze medalist in the same age category as Chad at the 2007 Nationals). 16 year-old Zach Ginn, racing in the 5K, took the lead at 1K and opened up a 5 meter lead as the trail left the groomed ski trails and entered the single track. 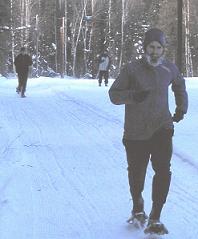 Kevin and I slowly reeled Zach in by 2K and then passed him at 2.5K. After a 400 meter section of ungroomed trail, I opened up a 20 meter lead on Kevin but he closed the gap on a downhill section. On a steep uphill at 4K, I dropped Kevin for good but didn’t realize at the time that 50 year-old Roger Sayre (picture) was moving up. At 6K I heard footsteps behind me and on a hairpin turn I saw that Roger was chasing me down. I had to really push the last 4K to hold him off.

Roger ran even 5K splits to finish only 13 seconds behind me. Roger’s runner-up finish and first place in his age group in all 5 races put him on top of the Finnish Line Snowshoe Series. I won 4 out of the 5 races in the series, but I finished 2nd to Kevin in one race which dropped me to 2nd overall in the series. High school runner Zach Ginn (coached by Kevin and I) won his age group in the 4 races he participated in to finish 3 in the series.”

Fairbanks needs a fund raiser to get Zach financed so he can make the Junior National Championship races and compete to be on the National Junior Team, along with Coach Kevin and Coach Chad who could also race in the Senior Nationals and bring home more hardware to Alaska. 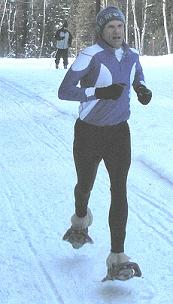 The Race Director further described that “On the women’s side there wasn’t as much action since only 2 women participated in the 10K. 31 year-old Liz Anderson had to push hard in the early stages of the race to get ahead of 52 year-old Jane Lanford (picture), but she went on to win by nearly 4 minutes. Liz’s victory gave her the overall series title for the 2nd year in a row, while Jane’s runner-up finish put her in 2nd place in the series and a winner of the highly coveted Atlas Snowshoes awarded to the top 2 men and women in the series 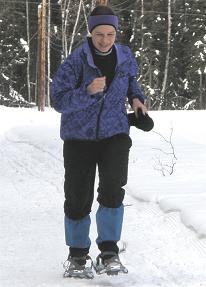