Pure-white craggy peaks penetrated clouds and rose above them. Soon after getting off the final lift at Happo One Ski Resort, I was standing on a mountain that had been the main venue for the Winter Olympic Games held in Hakuba Village, Nagano Prefecture, Japan, in 1998. The clarity and calmness of the moment belied the challenging trekking conditions I would soon encounter. 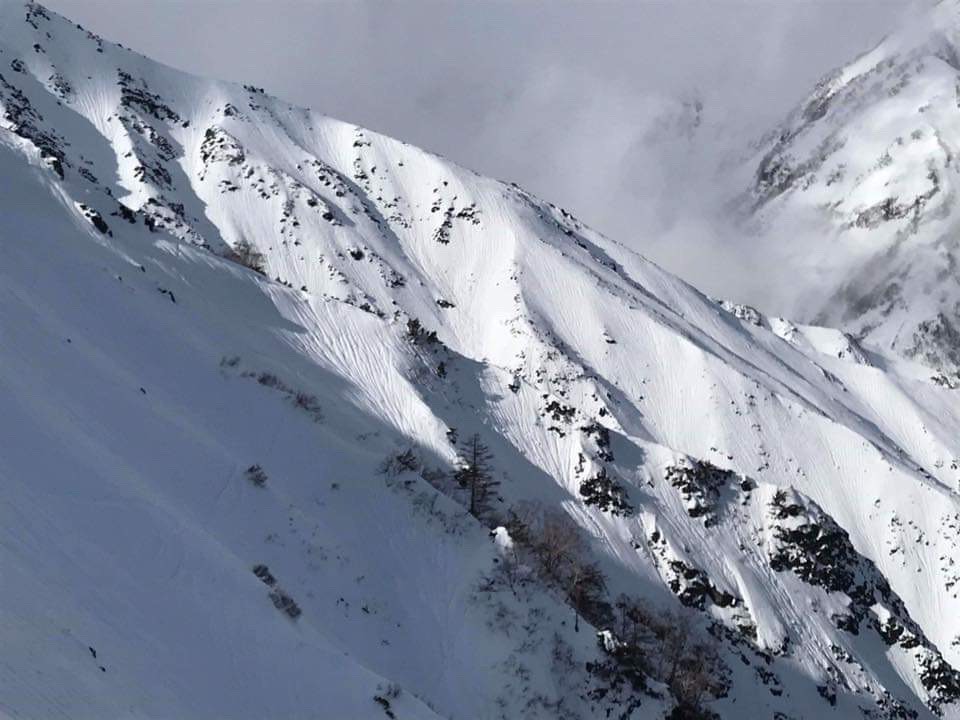 With the sun shining, visibility stretching for miles, and night approaching, my wife, my two friends, and I brought our bags to the simple mountain lodge (elevation 1850 m or 6069 ft) near Happo One Ski Resort’s highest lift station. We asked about the conditions and routes and then headed outside of the ski resort. Here, posted signs informed us of avalanche risks and that we would be responsible for paying for rescue operations. 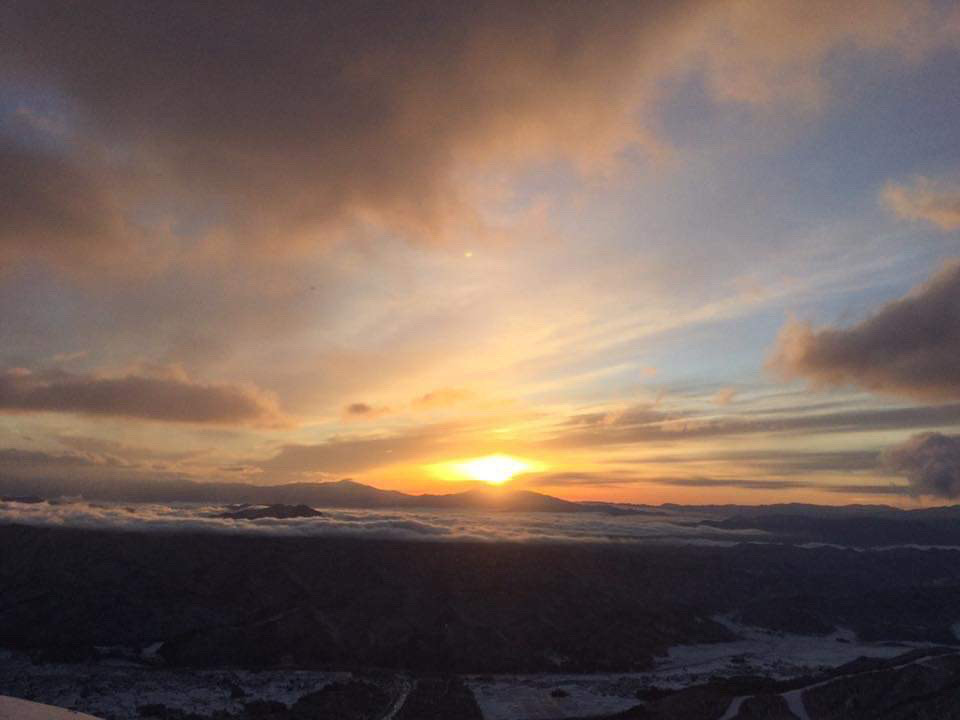 Some of the links in this article may contain affiliate links. When you make a purchase using these links, part of the proceeds go to Snowshoe Mag. These proceeds help us pay for site maintenance and article contributions. Additionally, as an Amazon Associate, we earn from qualifying purchases. Please see our disclosure for more details.

Way above us, the tiny tip of a rock cairn stood out above the pristine white slope that was a ridge flowing upwards. Our goal was the cairn above, which was a landmark along the Happo Ridge Route to Mt. Karamatsu, a 2695 m (8842 ft) peak in the Alps near Hakuba, Japan.

I took my gloves off to take photographs as the -10°C (14°F) temperature and steely winds turned my fingers into frozen sticks. But the beauty of the Alpine environment compelled me to take pictures despite the pain. So, I slapped my hands together and followed my wife. 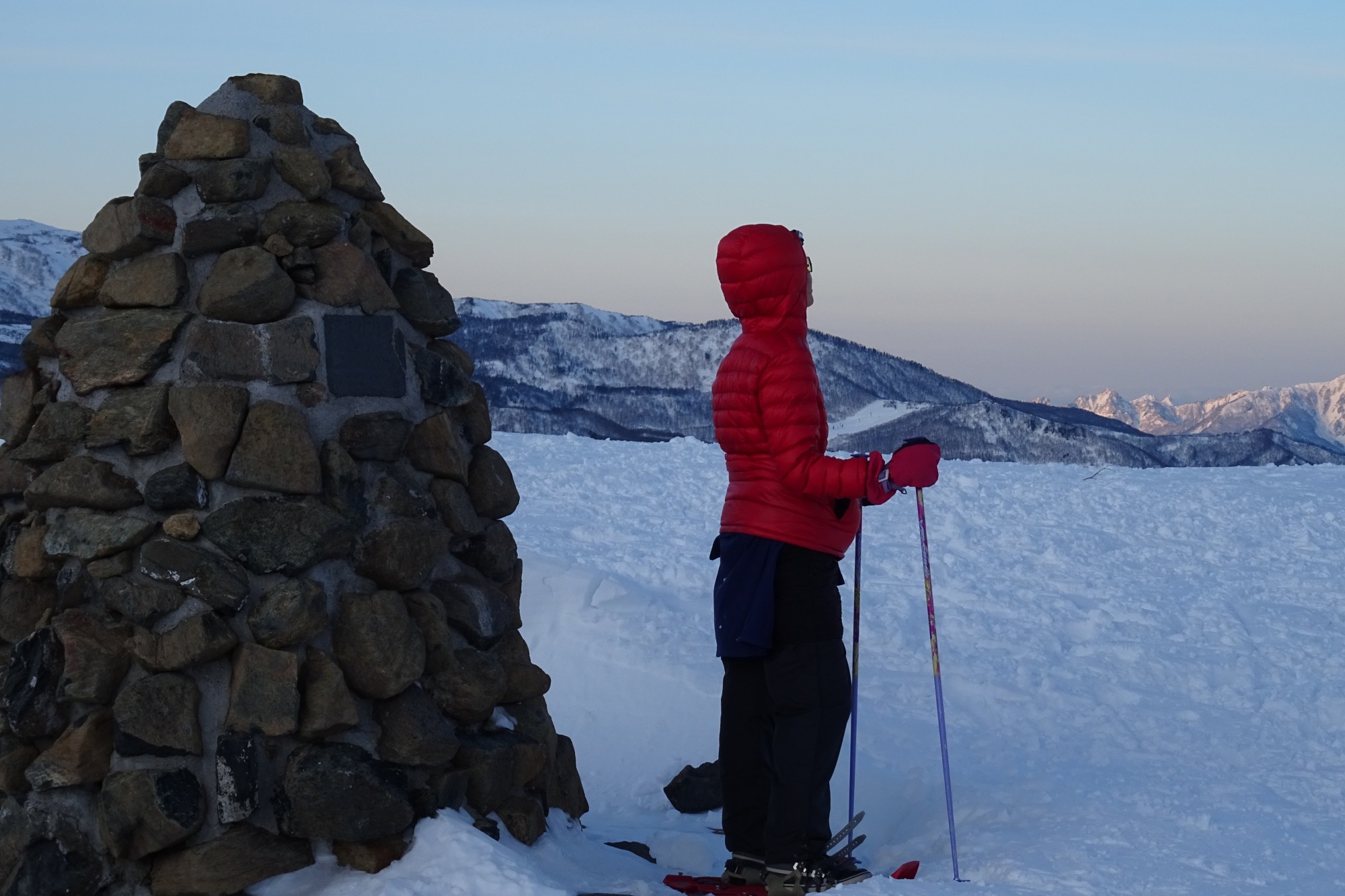 Pausing at the first cairn

The ridge grew steeper and steeper. My two friends, less experienced trekkers, decided to turn back. My wife and I continued. Faster than expected, we reached our goal at an elevation of 1,974 m (6746 ft). The cairn that from a distance appeared tiny was at least four meters (twelve feet) high.

We were on the top of Mt. Happo, but the trail continued onward. From that cairn, we saw others forming a line ascending the ridge. The cairns create a route that keeps winter mountain climbers from falling off the sides of cliffs or straying into possible avalanche zones.

Furthermore, one cairn held a metal plaque. Someone, whose son had perished in those mountains, built the cairn to serve as a monument for his child and to protect others.

Above the clouds Photo by Wakana Oshima

Calculating the distance to the next two cairns and the time remaining before sunset, we decided to walk toward the second cairn. Strong winds had sculpted hard ice and snow into a moonlike texture. The only sound we heard was the crunch of snowshoes breaking through the icy crust.

The sun was close to setting over the highest peaks when we decided to pause. Light shone through a gap in two mountains onto a solitary figure coming toward us. With crampons (like these Kahtoola K 10 Hiking Crampons), an ice ax, and other professional gear, he was equipped adequately for the environment.

Waving a gloved hand in greeting, I marveled at the skills and the bravery that it takes to hike alone in such conditions. Letting him descend in solitude, we followed his trail back to the lodge.

Read More: Why To Use Snowshoes For Your Next Mountaineering Adventure 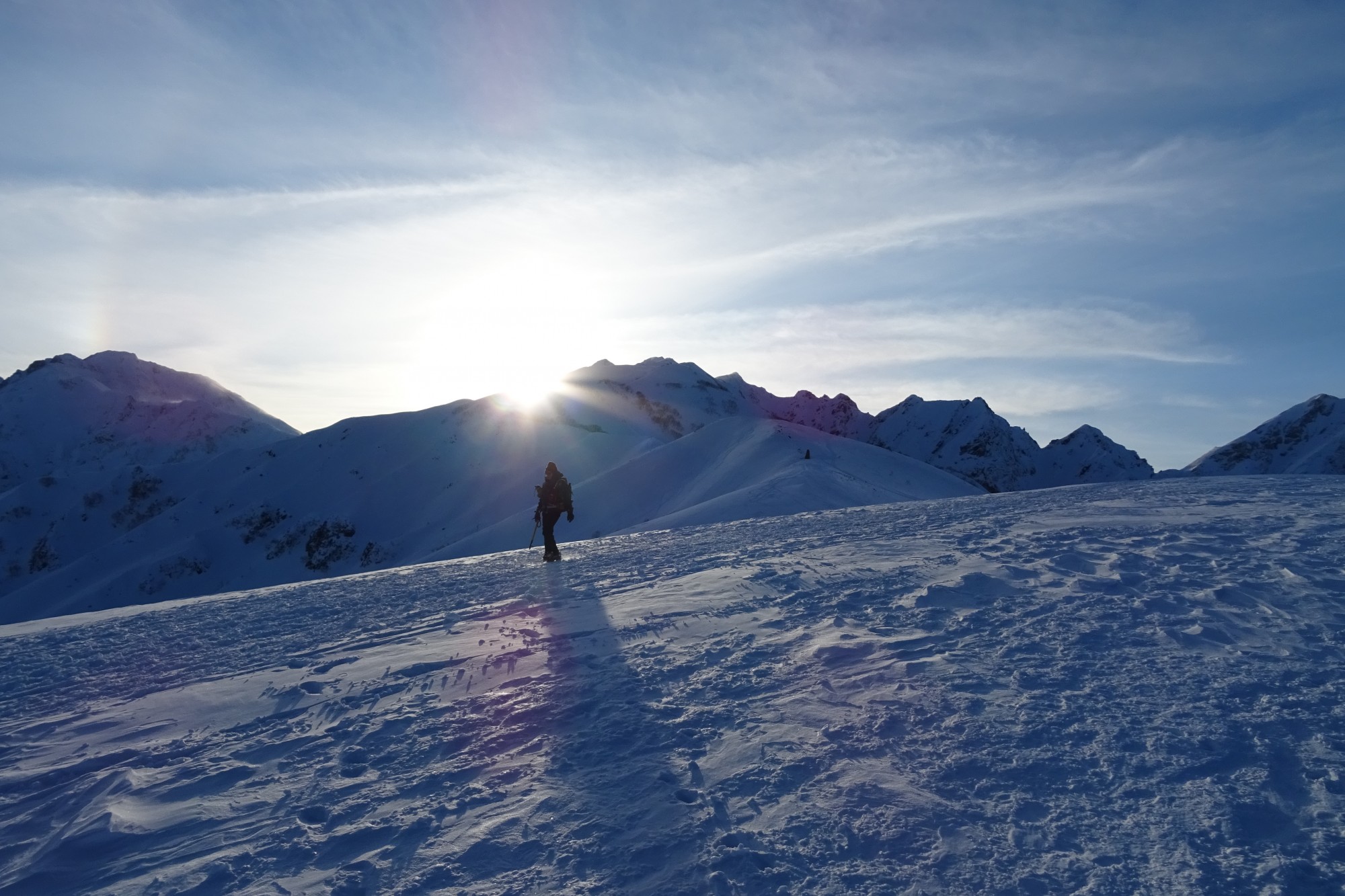 Accommodation For The Night: Happoike Sanso

The ski lift had long ceased operating for the day when we approached our top-of-the ski-area accommodation, Happoike Sanso. In the day, the mountain hut serves lunch to skiers and other day guests, but in the evening, only snowshoers, backcountry skiers, and other mountain lovers spend the night.

Guests commonly share rooms on busy days. But visiting on a weekday, my wife and I were the only occupants in our room. When fully occupied, guests sleep next to each other on futons upon tatami (mats made of woven straw), and everyone shares toilets. Two same-sex communal Japanese style baths are available. Be prepared for public nudity in the bathing rooms; it is a Japanese custom. The friendly staff prepares hearty and healthy Japanese meals for guests who sit together at long tables. 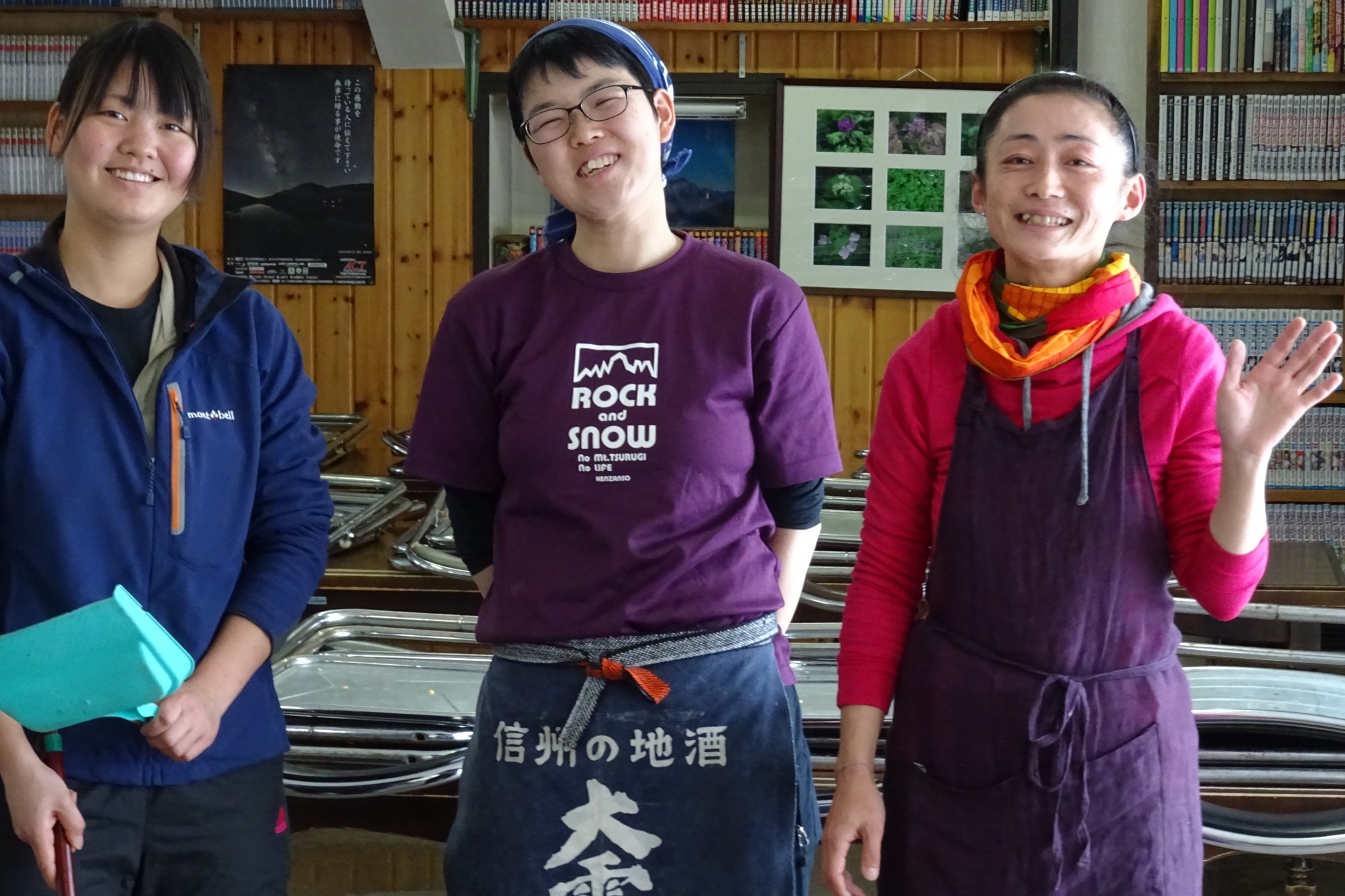 We paid 12,000 yen each for three meals. Some might think that this was too much for such a simple lodge. However, considering the incredibly remote location—helicopters drop off supplies—the fantastic views, the considerate staff, I was satisfied. Rates differ depending upon the number of requested meals.

My wife is a vegetarian, and the cooks thoughtfully cooked more vegetable dishes than usual for the dinner buffet. That night, the American, Japanese, and Chinese guests shared stories of mountain climbing near Happo One and Hakuba, in other areas within Japan, and around the world. The dining room includes a library of Japanese manga, books about nature, and texts on mountain climbing. In the morning, we ate a traditional style Japanese breakfast of rice, seaweed, fish, vegetables, and miso soup.

Morning came with strong winds and heavy snow. The lodge staff advised us to walk on the center of the ridge trail. We ascended again, and visibility continued to decrease. Thus, we followed the footsteps of other hikers. Without those tracks, I would not have continued. My two friends soon felt uncomfortable and went downhill. 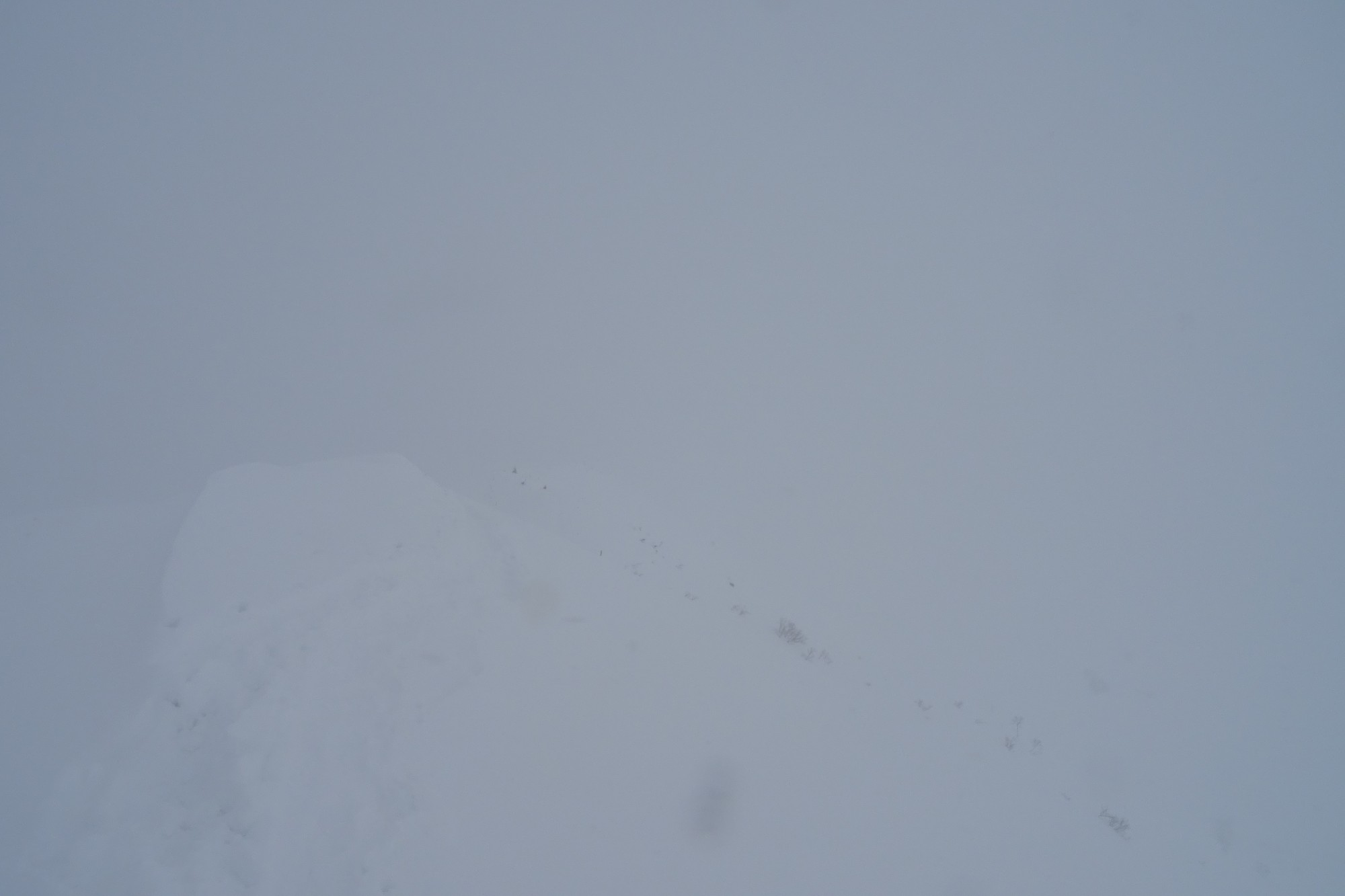 However, my wife and I continued. The white sky and white snow were indistinguishable, but visibility slightly increased as we passed the first cairn. Through the falling snow, the shapes of two hikers became visible, and we caught up to them at the next cairn. They were experienced snowshoers with top-notch gear.

Then, after the third cairn, we saw tops of poles sticking out of the snow. The poles indicated trails. If the skies had been clear, we would have seen Happo Pond. Though the scenery was not picturesque, I loved the intensity of the experience. 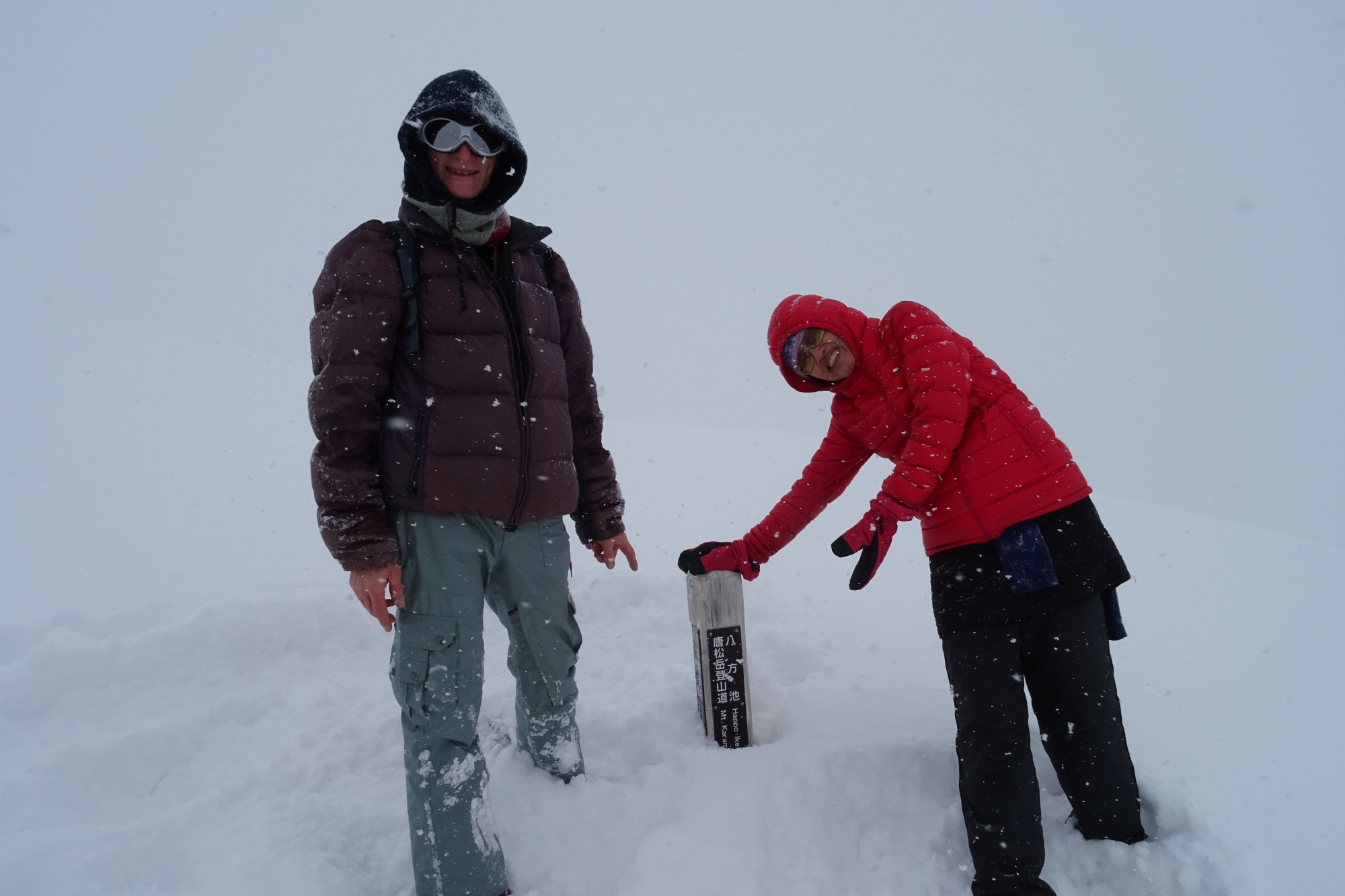 As the ridge we were traveling narrowed, an ancient stone-carved statue of Jizo, appeared in the snow. A Jizo is a Buddhist divinity that protects travelers and children.

Despite the promise of divine protection, my wife suggested that we turn back soon after passing the Jizo. The powdery snow was slippery, and the ridge had narrowed. My wife was justifiably concerned, but our new companions continued onward. 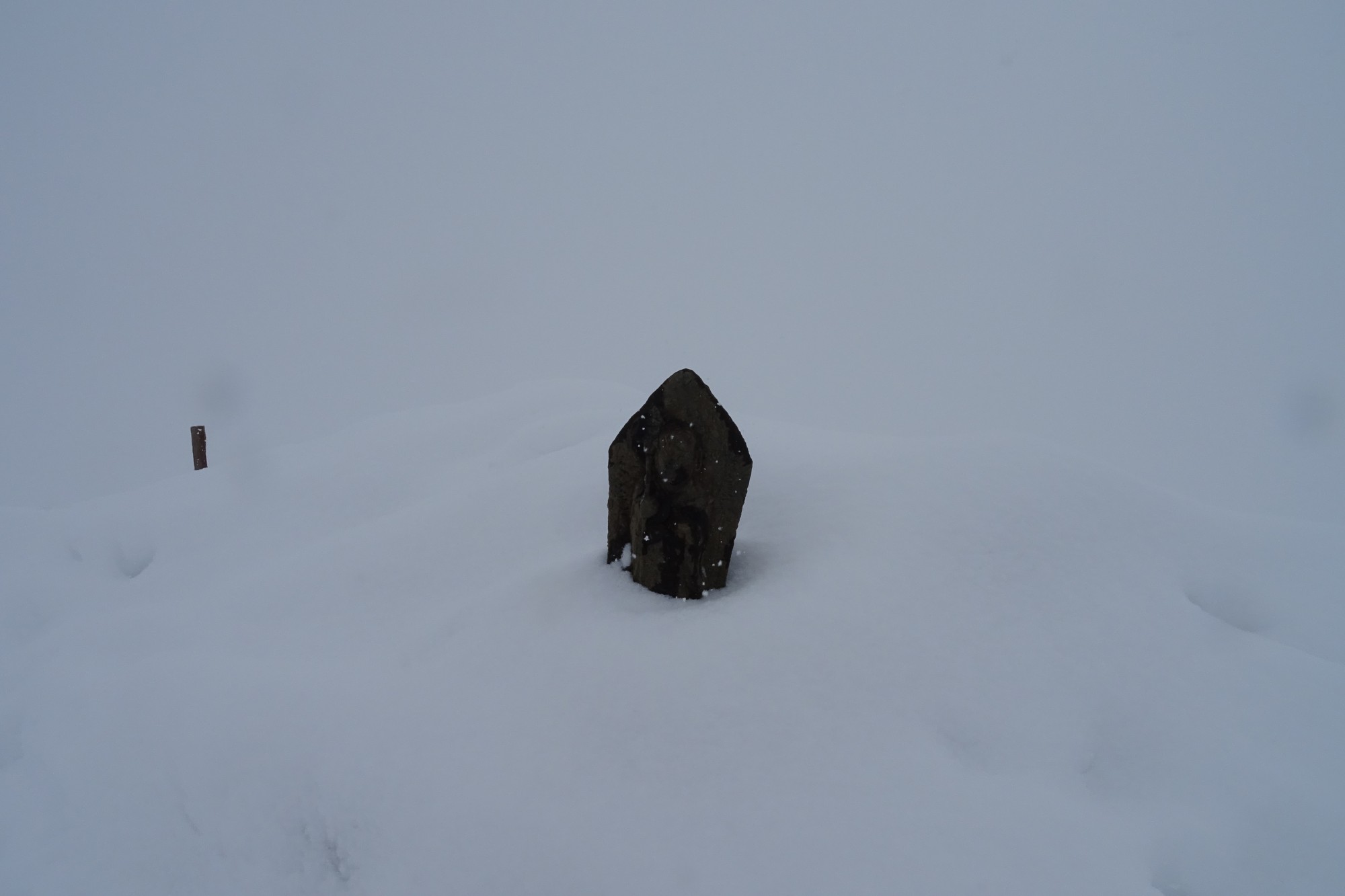 Jizo in the snow

Retracing our steps, I saw through a wall of snowflakes the vague shape of a man appearing to fall. Worrying that he was injured, I rushed forward. But I could not find him. Then, I noticed a trail slipping like a snake down a mindboggling steep slope. I briefly saw in the whiteness a solo backcountry snowboarder moving through spindly leafless trees. He was one more fantastic mountain athlete.

We rejoined our friends for a hot lunch at the lodge, and they were thrilled we had returned. We did not explore all the area’s trails, but all of us had enjoyed snowshoeing on a gorgeous mountain to the fullest extent of our skills and comfort levels.

With that in mind, both of these snowshoeing hikes are intermediate-advanced treks on the Happo Ridge Route. So, please be prepared with these day accessories if you attempt these outings, especially in these conditions. Also, as we did, be sure to speak to mountain hut staff for trail and safety recommendations.

Getting to Hakuba from Tokyo, Japan

Regarding getting to Hakuba, you have several options.

Finally, a more expensive option is boarding a bullet train that travels on the Hokuriku Line from Tokyo Station to Nagano Station, where you switch to a local bus that takes ninety minutes to Hakuba. For bullet train information, click here. Also, local buses within Hakuba take guests to the Happo One Ski Area and a few others within Hakuba.

What snowshoe routes have you taken within Japan, specifically Hakuba and Mt. Happo? Let us know in the comments below!