Bases were loaded. One more kick into the outfield and their team could gain some home runs. Excitement mounted as a young woman slammed a large beach-ball with her snowshoe, landing it beyond 2nd base and into centerfield. Two players came in for two runs, and the third played it safe by staying on 3rd base. The kicker made it to 1st base safely. What a game!

Kickball and other ball games on snowshoes were an integral part of college snowshoe classes and seminars that I taught for many years. A co-instructor and I would hand out cards with pictures of animals on them in order to randomly select teams for games. Teams included eagles, bears, owls and wolves. Since we often had up to 24 students participating, two teams of six would compete in snowshoe games with me, while the other two teams would play games with the co-instructor. We then switched teams so that everybody would play all the games. 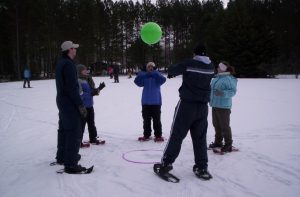 A game of moon-ball to warm things up

A good warm up ball game on snowshoes is moon-ball. Two teams compete by standing in two separate circles around a hula-hoop in the snow. Team members cannot step on or in the hoop, but they can be anywhere outside the hoop while maintaining a circle. One person holds the ball to start the challenge. When the whistle blows, the ball is released in the air for other members to keep it in motion.

The object of the game is to keep the ball in the air and in motion by passing it back and forth to team members for as long as possible. Rules include tapping the ball to keep it airborne, no holding the ball, and no touching the ball twice in a row. The first team to drop the ball loses that round. Several rounds are played to see which team scores the most wins. A game of moon-ball gets the adrenaline moving as well as the blood flowing, providing lots of thrills and fun for team members before competing in more popular ball games like kickball and volleyball. 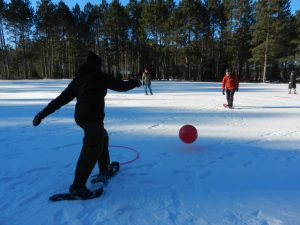 Kickball on snowshoes, using a beach ball and hula-hoops for bases

Most ball games need to be modified in order to accommodate both snow and participants wearing snowshoes. In the game of kickball, a good sized beach ball is used as well as hula-hoops for bases. I suggest bringing two or three balls, since a beach ball can deflate if hit too hard in very cold weather. The ball field is created by stamping down snow between bases, as well as from the pitcher’s mound to home base. Then it’s….play ball! Rules for the game are similar to baseball and can easily be found online. 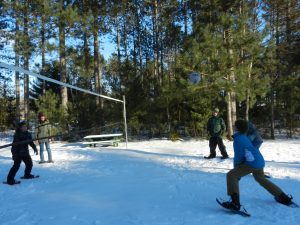 Play volleyball on snowshoes for a fast-paced challenge

Volleyball is another game that is fun and challenging when played on snowshoes. Needed is a volleyball net and volleyball. We were always fortunate to have an official outdoor net in place and ready for use from our university. Follow volleyball rules for serving and scoring. On one occasion, we were short a person for one of the teams. Not having played volleyball for many years, I decided to put on my snowshoes and join in the game. I took many nose-dives in the snow, but held my own. Not bad for an old guy.

I used a unique modification of rules when playing basketball on snowshoes. Rather than dribbling a ball when moving about the court, the ball carrier would have to continually bounce the ball slightly upward in their hands…dribbling the ball up rather than down. That motion seemed difficult at first. But once into the game, team members got used to it quickly. The game moved rapidly and points mounted as teams competed in a very different style of basketball.

The game field for kickball can be used for baseball or softball, using hula-hoops for bases. An orange or red baseball or softball works great, especially for finding the ball when it falls into the snow. The only other equipment needed is a baseball bat. Baseball gloves are optional for softball, but recommended for baseball. When our students played softball on snowshoes, they discovered that almost any game can be modified to play in the snow and on snowshoes. 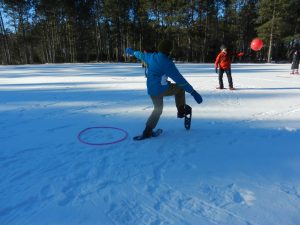 Caution when kicking too high in kickball!

Use snowshoes to play other ball games too! Get creative by developing your own modifications to such sports as touch football, soccer, dodgeball and tetherball. Set up plastic bowling pins and use an inflatable rubber ball to try your hand at bowling on flattened snow. Or modify using wood pegs and a volleyball. Be sure to brush up on how to keep score in bowling.

What about croquet? Use 6 or 8-inch inflated rubber balls of varying color, small 18 to 24-inch hula hoops or bent metal coat hangers for croquet wickets, two wooden stakes and actual croquet mallets. Set up the game according to croquet rules and start hitting away. What about golf in the snow and on snowshoes? I’ll let you create the necessary modifications. What would you use to substitute a golf ball? Or if using an actual golf ball, what color should it be? What clubs do you use? And, what about holes? See if you can play golf in the snow.

For physically demanding ball games, be sure to keep safety in mind. Players can be injured with snowshoes, if someone is kicked or stepped on. And falling on hardened snow or ice can result in injury as well. For example when playing kickball, lifting a snowshoe too high when kicking can result in the tail catching in snow and landing the player on the ground. Alert players of potential hazards when playing games on snowshoes.

In the good old summer time 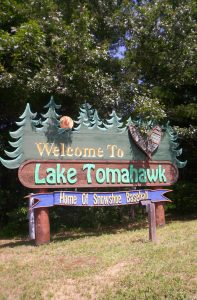 A rare and unique example of playing ball games on snowshoes that ultimately became a popular annual tradition since 1961, takes place in the good old summer time in Lake Tomahawk, Wisconsin. It is hard to believe, but the Snowhawks, a team of local players, compete in baseball on snowshoes against other community teams every Monday night beginning the end of June through the end of August. Games begin at 7:30 P.M.

The small town of Lake Tomahawk (population 1,043 in 2010) take pride in their summer sport, as their town sign reads, “Welcome to Lake Tomahawk, Home of Snowshoe Baseball.” Snowshoe Park is the setting for these festive weekly events. Ball players wear traditional wood-framed, modified bearpaw snowshoes, and they do not wear baseball gloves. The ball is yellow. And they play ball on woodchips rather than snow. 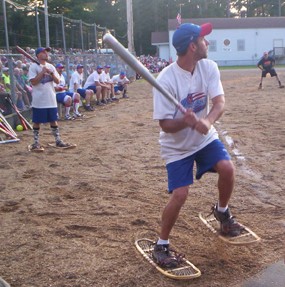 The games have no admission cost. However, a butterfly net is passed during the game for donations and the proceeds go to various charitable projects within their community. You can purchase soft drinks, brats, hamburgers, cheeseburgers, hot dogs, and popcorn at a concession stand, sponsored by local service clubs. A large assortment of homemade pie slices are also available. I sampled apple and pecan pie during my visit.

The games are always exciting. I enjoyed watching the Snowhawks pull an entertaining gag when they pitched a grapefruit in lieu of the ball. As the fruit splattered against the opposing team’s bat, all the Snowhawks in the field fell to the ground on their buttocks simultaneously. The crowd went wild with laughter! And in the seventh inning stretch, the announcers led the crowd in singing “Take me out to the ballgame.” What a hoot! And what fun! 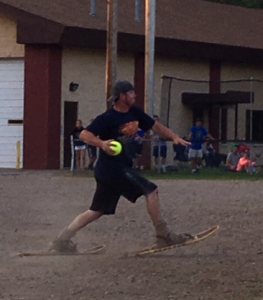 The opponent picks up a grounder and sends it to first base. Photo by Lisa Kuczmarski

Whether bases are loaded in a college class playing softball on snow in snowshoes, or in a summer baseball game at Lake Tomahawk on woodchips in snowshoes, the thrill and excitement flourishes. For any group planning snowshoeing activities, such as a school, club, church, scouting or community recreation program, consider playing a ball game. Game activities teach recreation skills, enhance creativity, help build team camaraderie, and provide healthy physical activity for kids and adults. When the bases are loaded, you can feel your adrenaline moving and the blood start flowing!