Good friends, great weather, spectacular scenery and smooth roads. These were the ingredients of a recent cycling weekend at Acadia National Park.

Acadia National Park is one of 58 national parks in the U.S. located on Mount Desert Island along Maine’s rugged Atlantic coast. It is one of the smallest national parks at 49,000 acres but still sees over two million visitors per year so it can get quite crowded, especially during the summer months. Our trip was in mid-June, well before the summer rush. 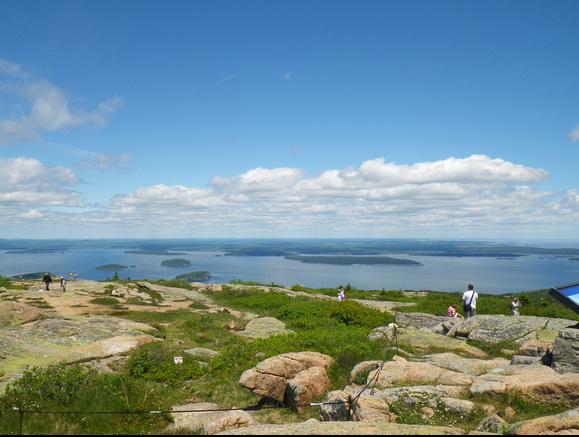 After a big breakfast and a couple of gallons of coffee, we cycled from our cottage at Hulls Cove just at the northeastern edge of the park. After a short climb we were on the Park Loop Road. The Park Loop Road is a 27 mile road around the eastern side of the park and as a cyclist I can’t say enough good about it. It was some of the best asphalt I have ever ridden. I don’t think I once dodged a pothole or even felt a seam in the road.

The speed limit is 35 miles per hour in most places, less in others, so cars are not zipping by you. But maybe the nicest part was that the first 13.5 miles was two lanes in one direction so we basically had the entire inside lane to ourselves. While I doubt this would be the case in the middle of the busy season it was great to be able to ride side by side with no concerns of getting hit.

There is no question that cycling here is hilly but every climb was rewarded with a stunning view. Our first climb was about 15 minutes into the ride and looked out over the town of Bar Harbor and the many small islands of Frenchman Bay and over to Schoodic Peninsula. And for every uphill we had to struggle through there was a downhill and I have to say it was a lot of fun cranking it out on some of these long, winding descents.

At the small community of Seal Harbor we left the Loop Road and continued along the coast to Northeast Harbor. This whole stretch of road was just one great ocean view followed by another with a nice beach, aptly named Sand Beach, about half way along. 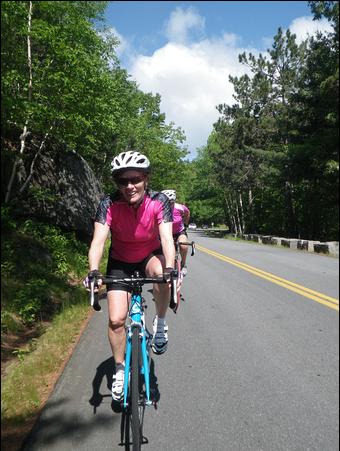 At Northeast Harbor we stopped for lunch. Since it was before the official start of tourist season not all of the restaurants were open but we were still able to find a great take out for fish and chips. Northeast Harbor is more of a fancy yacht harbor than a working lobster boat one and some of the yachts moored here are absolutely stunning.

After lunch we turned north on Sargent Drive and followed the eastern side of Somes Sound. Somes Sound is a narrow inlet that cuts about six miles deep into Mount Desert Island. Geologists refer to Somes Sound as a fjard which, to probably oversimplify, is similar to a fjord but smaller. The coast here is a lot tamer than along the Atlantic itself but whatever term is used to describe it; it’s still a very impressive bay to cycle along.

At the end of Sargent Road we joined Route 233 and headed back across Mount Desert Island to our cabin to shower up for a drive into the town of Bar Harbor. Bar Harbor is the largest town on Mount Desert Island with a population of about 5,200 people. It is undoubtedly a tourist town and even before the official start of the tourist season it was difficult to find a place to park. Having said that, it is still a great place to have dinner or maybe pick up a souvenir in one of the unique shops.

We enjoyed cycling the Loop Road so much that the next day we cancelled our plans to cycle the west side of the island in order to cycle the entire Loop Road and add the challenge of summiting Cadillac Mountain. Having a little familiarity with the route, I think I liked it even better the second time. That is right until we started to climb Cadillac Mountain. A 3.5 mile ride to reach the summit at 1,530 feet was, to me, a challenge.

Clearly it isn’t to everybody as I didn’t have the wind to answer the guy who said “good work guys” as he breezed by us. But the climb was worth every ounce of sweat. The panoramic view from the summit is truly stunning. There are not a lot of places on the north east coast where you can see 100 miles in any direction. 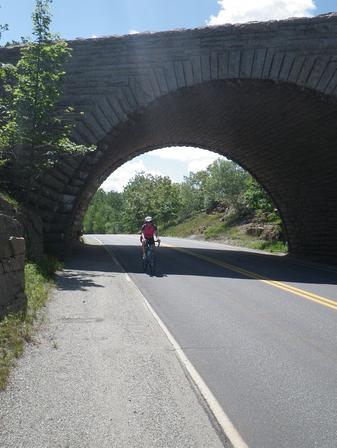 The top portion of Cadillac Mountain is barren. With no trees on the side of the road I could see all the way down to the ocean which made the descent very uncomfortable for me to say the least. Add to this that concrete blocks were used in place of guard rails and I couldn’t help thinking that if my brakes failed on one of the switchbacks I would fall a long way. But we made it down without incident and from there it was an easy ride to the cabin to pack up and head home. In the two days we cycled a little over 70 miles covering a variety of terrain from wooded roads, through fishing villages, past lakes and wetlands and along the rugged coast.

Maybe the best litmus test of a good trip is that you can’t wait to return and that is how I feel about Acadia National Park. There is the whole western side of the island we didn’t get a chance to explore. There is also a ferry from Northeast Harbor that goes out to the Cranberry Isles a little over two miles offshore. They are small and it wouldn’t take long to cycle them but they look very intriguing on the map. And I certainly wouldn’t be averse to doing the Loop Road again.

However Acadia is well known for a wide variety of outdoor sports so maybe next time I won’t bring my road bike but some other toys. For hikers there are over 120 miles of trails ranging from easy walks to strenuous hikes. Hikers can pick from a wide choice of terrains; along the ocean, through woods or, for the more energetic, up Cadillac Mountain. The National Geographic Topographic map is a great resource for hikers. It lists all the trails complete with their length and difficulty level.

Sea kayakers have what seems to be an endless choice of paddling routes. With numerous islands a short way offshore to explore and Somes Sound cutting through the middle of Mount Desert Island it would be  almost impossible to get bored kayaking here. The topo map mentioned above is a great resource for kayakers also.

One of the more unique aspects of Acadia is the series of hard packed gravel carriage roads that are ideal for wide tire cyclists. With 45 miles of carriage roads travel throughout the entire park is quite easy and very popular. Since cars are banned on the carriage roads, this is an excellent way for young families to explore the park. 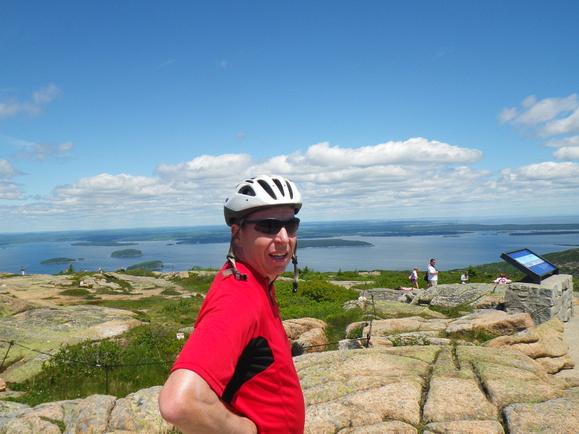 Rock climbers can get into the action at Acadia with some dramatic routes right on the sea. Climbing with the ocean right below you must be pretty cool. Instruction and information about rock climbing can be obtained from Acadia Mountain Guides and Atlantic Climbing School, both located in Bar Harbor. There is also a climber’s guidebook for the area available for sale locally.

And Acadia is not just a destination for summer. Once the snow flies the carriage roads and another 40 miles of unplowed roads are available for cross country skiing and snowshoeing. I can imagine that the woods of Acadia must be a very pretty place when they are covered in snow.

There is no question I will return to Acadia National Park. The only question is how long can I stay and which outdoor equipment I will bring.

Doug Scott is a full time Community College instructor in Saint John, New Brunswick on Canada's east coast. When he's not in the class he can usually be found outside on his snowshoes, on his bike or in his kayak.