Oh, for the lack of an inch. A fluffy snow accumulation arriving Friday just missed the depth necessary to snowshoe these relentless switchback trails at the Murphy-Hanrehan State Park in Savage, Minn. Race Directors Mike and Colleen Millonig told me, “With the rock and roots, snowshoes would be torn apart.” So it was a shoe-on-snow race with a mix of grippers and screw-shoes to grasp the slick, off-camber trails one finds here, particularly when looking down from steep hills. 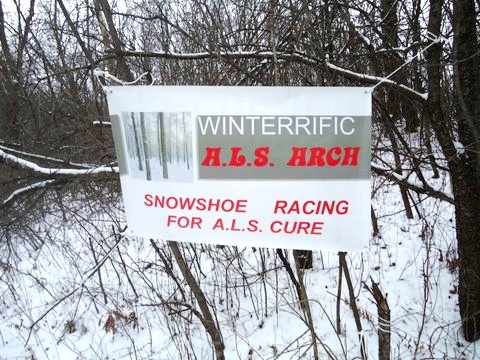 Sign in the woods alerts racers to the “Winteriffic ALS Arch”

The third edition of the new age Winteriffic, revitalized after years of incubation by the Millonigs, celebrates the life of the event’s creator, Buster Whitmer, who founded this event in 1986 when snowshoe racing wasn’t considered as cool as it is today. Additionally, starting in 2012 this USSSA qualifier was upgraded and awarded by the USSSA its designation as Minnesota’s Senior State Snowshoe Championship. 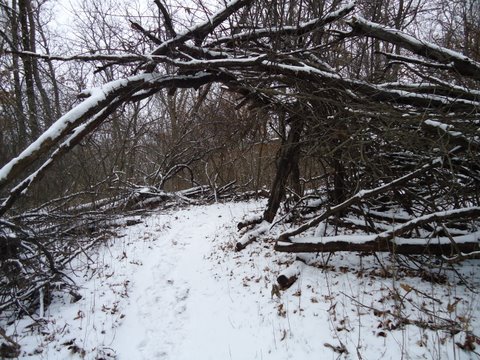 The First Minnesota Senior State Snowshoe Champion, Kyle Donovan, 26, repeated his dominating performance here in 2011 to capture the title going away. This Kinni Track Clubber’s 37:10 with trail shoes on snow compared with his previous year’s victorious 49:54 on sugar snow in the exposed areas run with snowshoes.

Donovan said, “The course was in good condition considering the snow we received. I wore cross-country spikes to get better traction, but the snow clumped on the bottom a little . . . the added traction was nice, though. The single-track course has a lot of turns which made for a lot speed changes, but it was still a lot of fun. Minnesota Snowshoe State Champion and two-time Winterrific snowshoe six-mile champion is a pretty good day.”

Donna Okroy, 54, Beldenville, Wisc. captured the first Women’s Minnesota Senior State Snowshoe Champion title with a 58:56 finish in her first go at the Winteriffic, bringing plenty of joy to senior masters women everywhere. Okroy is active in snowshoeing and trail running, participating in events such as Whitetail Ridge qualifier in Wisconsin and the Big Woods Trail half-marathon in Southern Minnesota. 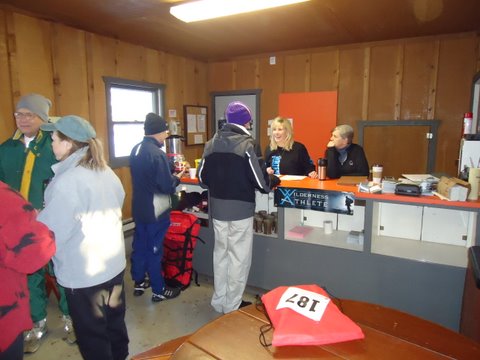 Tri-athlete Micah Turman won the silver for the men’s state championship, five-minutes behind Donovan while Daniel Tian’s bronze finish was 71 seconds later. Tian edged “Braveheart” Jim McDonnel racing in his full Scottish regalia and white/blue face paint. Jim’s ability to add sizzle to a race with his costume, to say nothing about his racing ability, puts to shame many (like me) who race in dull colors.

Emi Yasaka, Mpls, won the 10-Mile loop outright with her 1:27:25, leading the second overall, Molly Moilanen, by seven minutes. Lisa Trainor almost made it a three-woman sweep of the top spots but was edged by Dennis McGraw by 12 seconds. Paul Schaefer (second in the ’11 20-mile snowshoe) and Steve Greseth rounded out the men’s field top-three.

Yasaka, a Senior Designer at Best Buy, Inc, is fresh off her NYC Marathon finish. “I train on trails once or twice a week, but I mostly run on roads the other days. I prefer to race on wider cross-country courses, but I am starting to enjoy these single, winding switchbacks like Winterrific.” Yasaka frequents local trails at Hyland State Park, Theodore Wirth and other trails in the area.

“I race more on roads between spring and fall, but I plan on running more trail races this year. One of my favorite races from the last year was the Wild Duluth 50 km. It didn’t go too well; I got lost twice on the course. My goal this year is to run a good solid 50 km race–and not get lost!”

Mark Brose displayed his distance training capturing the 20-mile, two-loop switchback tracks’ win going away. As an active athlete–he races 2-3 times monthly–Brose led off the line and extended his finish to lead by 12 1/2 minutes over Justin Bakken for a 2:40 time. Bakken leads the WEDALI Adventure Racing Team who were the 2010 US Adventure Racing Champions. Becky George won third overall in a strong 2:53:12 followed by Joseph Adtendahl, the 2011 overall winner. Maria Barton won second woman finisher.

Brose won the inaugural 2011 King Boreas Snowshoe Race, a part of the St Paul Winter Carnival along with racing many of the qualifiers like the Snowshoe Shuffle and other snowshoe races in the region. In the Winteriffic, Brose snowshoed the 10-mile 2011 version, finishing third after a great battle with Dennis Wallich and his fourth spot crossing.

Brose told me afterward, “I really enjoy running at Murphy-Hanrehan. I’ve run several trail races in the park, and it’s one of the great local parks for sure. It’s fun to get a chance to run the mountain bike course as part of Winterrific. It’s a great snowshoe course. The winding hilly single-track makes for a challenging and engaging race. I guess it suits me. I am excited to win the 20 this year.”

These 10-mile loops are the best example of switchbacks in the region. Other racers can be above you going an opposite way, giving hope that one is catching them, only to find that the lower trail has to meander six more minutes to just get to that spot. Brose described it from a leaders perspective: “The switchbacks allow you to keep an eye on your competition!” 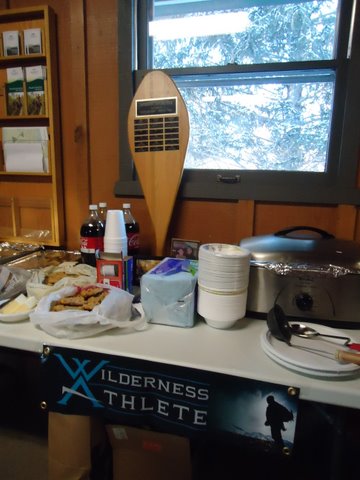 The race starts as Millonig draws a line in the snow with his boot, then a tour of the open field of dreams ensues before entering the woods. The map of the course looks somewhat like Mother Nature laughing hysterically at the thought of someone marking trails here . . . the squiggly path goes everywhere. The course, though, is easy to follow not only because of the efforts of the organizers but also the posts every quarter-mile or so. The race starts at post 50 and ends at 90, so a competitor can keep up with the distance; at 60, for example, approximately 2.5 miles have been covered, and so on.

Two Wilderness Athlete aid-stations served up WA’s Hydrate and Recovery along with their peanut butter crunch performance bars (laid on top of cooking, covered soup to keep them from freezing) while supplying hot chicken soup and trailmix. Cola and water iced rapidly in the -7 temperature start.

Brose noted, “The weather was beautiful. It was cold enough to prevent overheating and the sunshine just made it a gorgeous day for running. The one challenge I ran into was the nozzle on my hand-held freezing, and then eventually the screw top freezing.”

The second aid station was moved to post 78, about 3/8 mile further along, a key improvement as the new location is the end of a long woods segment and marks the beginning of a new field section. Also, clearing this station means a snowshoer is entering a quicker terrain to the finish.

Bob Rusch had a shocking surprise as he again finished the 20-mile distance; his entry was drawn as the winner of the Wilderness Athlete Backpack, a $300 item. As he was still on the course when the drawing was made, his finish was the first time organizers could share the win with him.

Maria Barton, Treasurer for the Upper Midwest Trail Runners, raced the 20-mile distance while husband, Doug, chose the state championship distance. Maria told me she was needing the mileage as she would be racing a trail ultra “in warmer climes” soon.

Barb Van Skike, 20-year race director of the retired Northwoods Snowshoe Marathon and 10 km Qualifier, was with her daughter as both helped in the meeting hall of the park.

A sentiment heard often was expressed by 20-mile champion Brose: “Mike and Colleen Millonig do an awesome job with this race. They are the friendliest people and seem to be having a lot of fun. The course was easy to follow, and the post race food was tasty like the great chili!”

Men’s State Champion Donovan said, “I can’t thank the race volunteers and race directors Colleen and Mike Millonig enough for putting on this great event and getting sponsors who want to promote snowshoeing and trail running.”

Winteriffic donates its proceeds to the ALS Association in memory of Whitmore. In addition to Wilderness Athlete Performance Products, Summit Snowshoes sponsors this race.