It is not pumpkins on Halloween and pumpkin pie on Thanksgiving, though that is not bad. The carved pumpkin gives a new clarity of T.S Eliot’s famed “The Hollow Man” by the time turkey days roll around. “We are the Hollow man. We are the stuffed man.”

How about some of the best — defined here as great names — trail races of the year providing not only a spirited time but also holiday appropriate shirts and gear. Is this your favorite race, the one in Palmer Lake Colorado called the “Halloween Creepy Crawlers” 5 km for the YMCA?

You could have raced six hours at the Canadian Horror Hill Run now in its 17th year giving one the feeling there’s some tough work involved, and you’ve been on a similar hill before. A great idea at this event is if you raise twice the amount of the registration fees in pledges, your entry fee is waived.

Terrific for the runner, terrific for the fund raising mission of the Optimist Club sponsors, and also provides a steady, growing list of contributors many of whom just might become interested enough in the cause to keep at it going forward.

Then contemplate the Haw Ridge Trail Run, not sounding too scary on the surface, but who’s to know what resides on Haw Ridge? One also wants to answer the question, what happened to “Hee.”

Part of the Montrail trail series, this gathering happens to be in Oak Ridge Tennessee near my hometown of Knoxville where I grew up on the two lane Oak Ridge Highway, a paved trail connecting the two. Maybe Haw Ridge is where “the bomb” was thought up.

Considered some of the best singletrack around them parts, perhaps a visit to its “Hill of Truth” will give an answer. If you have ever spent more time on a farm than just buying a bushel basket of produce at a roadside stand, you will know at the top of Haw Ridge, go left. 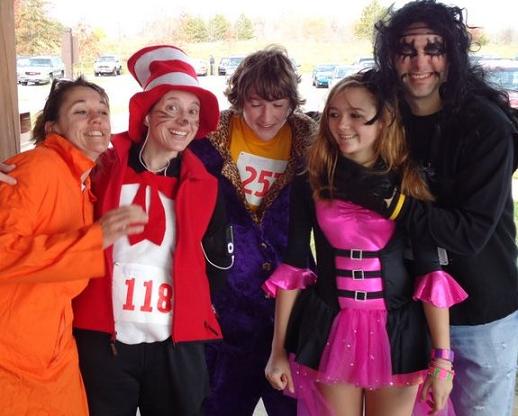 Then there’s the Haunted Chase in Charlottesville, Virginia, and in nearby Clifton a nice fall event, The Backyard Burn, whose ten mile race must have toasted the website as it wasn’t available.

I raced in Adventure Sport’s Great Pumpkin Chase, Lake Elmo, Minnesota featuring separate 10 km and 5 km courses and times, so the more enthusiastic goblins can run both in their famous “Double up” option. Interestingly exactly 19 women and 19 men opted in for this fun on a beautiful fall day northeast of St. Paul. The times of the two are added together, and you have a whole new set of results.

Paul Donnelly, Minneapolis, won the combo over Anthony Peter by taking the 10 km win while Anthony zipped the 5 km. Halloween spirits caused Anthony to take a spooky wrong turn at the four mile marker, costing him minutes back to where he was. He lamented, “That happens.”

Laura Oliver won the combo by leading the 5 km and the 10 km at the finish. Second in both was White Bear Lake’s Kelly Ramacier, more than twice Laura’s senior. Laura and Paul train at the Hyland Park Reserve across the Twin Cities in Bloomington. A popular series of trails there are laid out in one of the season’s early ultras, the 50 km Trail Mix. Trail and road racing augments an active schedule of Nordic and cross-country skiing for them. 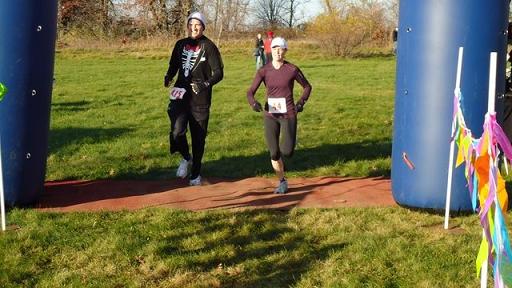 Jeanne LaBore, Minneapolis, as the day’s most senior female racer, showed no slack as she completed the combo, too. A neat white long-sleeved shirt festively adorned with a bright, lit, smiling pumpkin and fall leaves was the perfect way to wear Halloween appropriate attire and look good all at the same time.

So, plan to race a Thanksgiving Day or weekend event this year, and you might just get your wardrobe for the Holiday, too. Check out the Gobbler Gallop Trail Run in Saginaw, Michigan, or the Nitro Turkey and Little Turkeys Race trail run in Pinole, California, the unubiquitous Turkey Trot in Topanga Canyon, California, and about 100 other spots having the same name throughout the USA including Turkey Lane’s Turkey Trot.

Then in Alabama is the Pilgrim Chase, and finally getting a head start on everyone else is the Greater Pittsburgh’s Road Running Club’s G-U-T-B-U-S-T-E-R run on the weekend prior to Thanksgiving so the gut can recover in time to wolf down that turkey. The club invites everyone, even new road racers to join in their events, though I would think the name alone puts a dent in newbies’ desire. You’ll find me at the Dash and Dine Thanksgiving 5 Km, Chisago City Minnesota, as in “I’ve gotta run, it’s time to eat.”

The best place to race on Thanksgiving is the seventh annual Copper Gobbler Snowshoe Race at Copper Mountain Resort, Colorado, where you can tune up the snowshoes for those upcoming USSSA snowshoe qualifiers . . . and get in the first snowshoe race of the new season.

Now, that’s something to be really thankful for, too. 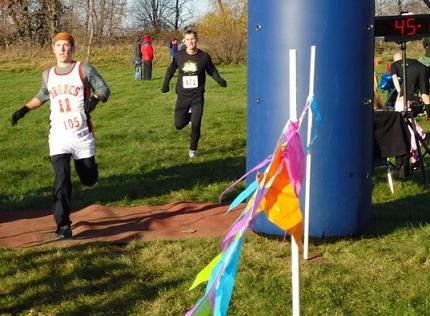