As if humping up and down these mountains with black new-moon light wasn’t challenging enough, an on-and-off again predicted rain slammed the course and created fog limiting vision to inches. Arriving at midnight with a sudden cold, the additional challenge created finishers with fortitude worthy of Gitchee Gumee. New idea . . . How about bulbs on runner’s legs acting as fog lights?

The Superior Hiking Trails, paralleling Lake Superior with the jagged Sawtooth mountains have this unique quality: when the skies even think of rain, the dirt becomes mud just to get a head start. Add a downpour and the paths become creeks, up one side of a climb and down the other. Yet the hardy Sawtooth endurance athletes pull through with amazing performances. Their attitudes prove Superior Trail Races (fall and spring) are attracting tough performers whose finish focus, epic in the microcosm, are worthy of their national stage.

Brian Peterson, Minneapolis, won his first 100, and a beauty at that, in 22:39, the third best time ever for the Sawtooth. Paced by a recuperating Joe Ziegenfus, both members of an elite training group running out of the Twin Cities, Brian was pressed to 61 miles, the Crosby-Manitou aid station, by Andy “Wild Bill” Holak who never fails to create his own brand of excitement on this, his home 100 course.

From that point on, the 2010 Sawtooth was Brian’s to win barring any sudden surprise; none came to this new challenger for Sawtooth supremacy. “He’s got it,” Ziegenfus told Larry Pederson on the pending finish,  who with wife wife Colleen directs this annual weekend. 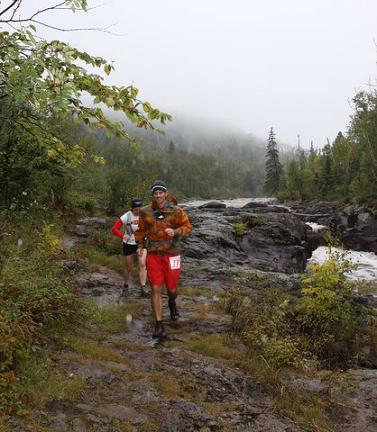 As a 26-year old ultrathoner, Brian has the capacity to become the go-to dominant ultra trail racer for as long as he chooses. Or until Joe’s ankle repairs itself from an injury caused by a more normal sport? Once Brian learned the magic of big bulk training miles on dirt, he has zoomed to the top.

Adam Cassedy, 30, from West Virginia, a member of the West Virginia Mountain Trail Runners, logged a 23:48 in his first Sawtooth. As a Doctor of Optometry, perhaps he has a new idea for night fog-vision glasses that could be a break-through here.

Sheryl Wheeler, 47, New York, stayed within reach of leader, Val LaRosa, 34, Minneapolis, (see photo) throughout the event, though the gap widened from the Tettegouche aid station (mile 34). Finally at Oberg, the final aid station, she passed a fading Val and won with 27:42. Val had zipped through the aid stations but “I ran out of gas” coming into Oberg. “I had nothing left for her.” Wheeler won Massanutten earlier this year.

Christopher Rubesch, 24, Duluth, won the Superior Trail 50 mile with a 9:09 clock, knocking 23 minutes off “The Duke” Rembleski’s 2009 result for this point-to-point 50. Brian Peterson won the new layout’s inagural in 2008 in a little more than ten hours, and finished 2009 just behind Rembleski with a 9:48. With better trail conditions, the first eight-hour finish should occur in 2011.

John Horns, 48, Edina, took second in only his first adventure at this distance with a 9:17 finish. Horns has been a dominant force in the Moose Mountain Marathon — winning half of them over the last six years — run in conjunction with the 50 and 100. Running with Peterson and Ziegenfuss among others in the group at the ‘normal’ trails of the Hyland Park Reserve, Bloomington, in their weekly outing proves that practice with talent creates more performance, not necessarily time on the Superior Trails. Riding with Horns on the bus to the start, he told me of his Alpine skiing experience and his daughter’s competitive role in that sport.

Womens Superior Trail 50 mile winner, Arika Hage, 34, Lakeville, toughed out the course in 13:04, followed by Tammy Hunter, 47, Wisconsin, five minutes later, both well off the course record, hampered by the challenging conditions. Then Julie Hagen, 42, of Colorado crossed followed by Angie Puent, 39, LaCrosse, who has two age class wins in the 50 mile distance and Mary Gorski, 47, Milwaukee, who won her class here in 2009. Amy Carolan, 28, Stillwater, finished second in her age group, a first Superior Trail 50 mile attempt.  After a 50 km spring trail finish here, she completed her first 50 mile at the Voyageur in its annual summer ordeal. 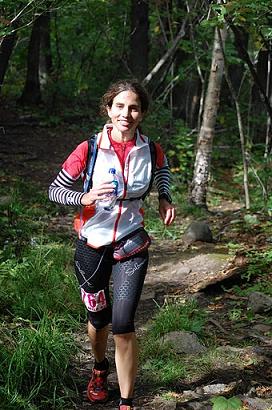 Kirk Walztoni, Eagan, slushed through Britton Peak – Oberg section and yet scored a 3:54 win for the marathon, a great time for this first time racing this event.

Rochelle Wirth, 47, Duluth, has been on a tear winning the inaugural Wild Duluth 50 km for the womens class less than a year ago, and earlier in 2010 added the Ghost Town 38.5 out of New Mexico to her wins. She took the Moose Marathon for the class in 4:29.

The stories out of the Sawtooth finishers were epic. Susan Donnelly, Tennessee, multi-year finisher and two-time winner for the class, said the rain created a thick fog. “The forecast was iffy on the rain but thank goodness I carried my jacket. When it started, it felt like temperatures dropped ten degrees out of the 50’s. It got cold.”

Molly Cochran, 35, Lakeville, was attacked by bees two years ago and fell out of the race. Although attacked by mud in 2010, she got her red Sawtooth jacket and buckle with a 32:28. “I’m glad the first 50 was uneventful for me, because the last 50 more than made up for that!”

Dale Humphrey completed his journey in the Gnarly Bandit Race Series (and Daryl Saari, Rochester), a combo series featuring 100 mile and 100 mile / 100 km mix, and his fund raising effort for the Ely Track and Field teens who were left out of the school district’s budget. One donor stepped up and pushed the total above $3,000. Donations are still needed.

Jason Husveth, 38, Marine on the St. Croix, had help from his sister, Lara Mortimer and brother-in-law, Karl, who journeyed to Sawtooth land from Maryland. “This was her third time. I gave her my finisher’s jacket in her size, of course; Pacing from mile 43 (Cty Rd #6 Aid) was very helpful. I had a nice race through Temperance (aid at 84) then lost my quads. I had to gut it in.” His finish was 34:55.

RD Larry Pederson told me the Britton Peak Aid station was jammed near the 5:00 pm cutoff as both 100 and 50-mile runners made sure they made the cut. “Dale and his family and crew got everybody out of there.” Stopping by the Oberg Aid Station late in the day, the last aid before the finish — once clearing it, one is official just by crossing the finish — many servings of their popular dish, special mashed potatoes, were dished out by Kate Havelin and others at the food table.

In the Sawtooth, if a racer drops at half way (Finland aid, 50.5) or beyond, they are official for the 50 mile as a finisher (non-award). In the 50-mile, the runner is official for the marathon if they make Cramer Road aid (26.7). 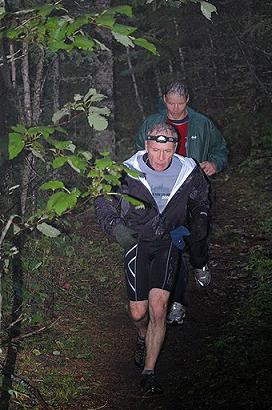 But back to Andy Holak. What happened to Andy? At the Crosby-Manitou aid, pushing Brian Peterson up to that point, staying 10-15 minutes behind, he was felled with dry heaves and stomach distress. He crawled into a camper and slept for a couple of hours, I’m told. He woke up, still didn’t feel well, and went back to sleep. It rained hard, he slept. Later waking, he felt better. He ate some things at the Barton’s buffett there, and maybe got inspiration from Maria’s little water fountain on the table.

So, did he take the ride back to the start and drop? Are you kidding? Andy? Of course not. He hit the trail, made that amazing Crosby-Manitou climb out of the river gulch — a climb that just keeps on giving as it head-fakes its end multiple times — and setting an example for all finished with a numeric prize of 32:23.

Perhaps a mantra for these trails — both spring and fall races offered gushy-goop to run on in 2010 — could be taken from an altered lyric out of Led Zepplin’s thoughts: “All I hope for, all I pray, is cool dry trails to come my way.” 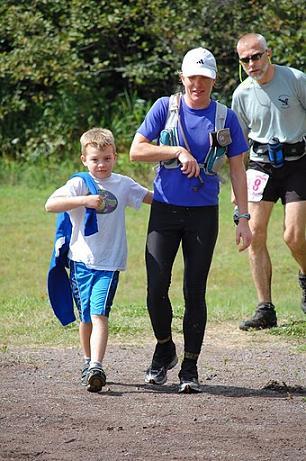