This is the third in a series of interviews with notable snowshoe personalities that we will be presenting throughout the season.

Dave Dunham lives in Bradford, MA and is a pioneer in the sport of snowshoe racing in the Northeastern United States. Dave has numerous top five finishes at the U.S. Snowshoe Running Championships, including winning in 2001. He is also a race director for three snowshoe races. Dave is a member of the La Sportiva Mountain Running Team and Central Mass Striders.

Snowshoe Magazine: What is your athletic background and how did you get into snowshoe running?

Dave Dunham: I’ve logged over 100,000 miles since I started running in December of 1978. I’ve also competed in over 1,000 races over the last thirty years and been injured over 400 times (ugh!). I’ve been fortunate to become involved with snowshoe racing during its infancy and have seen it grow quickly. I was a seven time All-American at the Univ. of Lowell (MA) and twice qualified for the Olympic trials marathon. I also set an American record for 50KM. I got into snowshoe racing after I won a pair of snowshoes for setting a course record at the Cranmore mountain hill climb. I’ve been competing ever since. I also direct three snowshoe races and look forward to the opportunity to expose others to the sport. My competitive drive comes from wanting to push my limits, be it road racing, trail racing, mountain racing or snowshoe racing.

Tell us about your very first snowshoe race.

DD: My first race was in 1999 at the Western Mass Athletic club’s (WMAC) Hawley Kiln seven-mile. I finished less than ten seconds behind the winner without knowing anything about preparing for or racing on snowshoes.  I lost my shoe four or five times during the race, I kept stopping to tighten the straps then I’d catch back up and lose the shoe again. Lesson learned, and I was hooked! By 2001, I was National Champion at the first USSSA Championship in Plattsburgh, New York.

Describe a typical training week and your key workouts.

DD: I normally run twice a day during the week, 4 miles at lunch and 8 miles in the afternoon. If I’m not racing (which isn’t very often) I do a long run on the weekend. I find that I can’t do the 20-mile runs of my youth, but I’ll max out at about 15 miles. Typically I run 80-90 miles per week for the entire year. I don’t like down time and only take days off if I’m injured. I only do speed work when I’m 100% healthy and even then I limit the distance to 2 miles. I’ve found that if I do more than that I get injured.

How much do you feel it is important to train on snowshoes to be able to race well on them?

DD: I don’t think it is important at all to train on snowshoes to race well on them. I tend to do just enough to feel comfortable on snowshoes. Some seasons I wouldn’t run on snowshoes until the day of the first race. The learning curve for SS racing is very short, after just a couple of times on snowshoes you get the hang of it.

DD: Snowshoe running/racing definitely enhances other types of running. It is a great workout with none of the pounding associated with road running. I come out of the SS season very fit. It is also a great mental toughness builder. There is nothing quite like running 15+ minutes per mile and being on the verge of collapse to get you ready for mountain racing. Both are similar in that you have to be very good at paying out your effort over the course despite the fact that you are moving slowly. You really have to be in tune with your body. 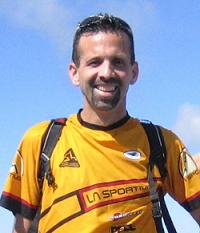 What was your most competitive snowshoe race?

DD: The USSSA qualifier in 2004 at Northfield Mountain. The field was incredibly strong. I was in decent shape and ended up in 16th place. US mountain team members (and USSSA medalists) Richard Bolt and Paul Low went 1 & 2. There was less than a minute between 2nd place and 14th place!

What, if anything, is different about snowshoe racing than other type of races, in terms of atmosphere etc.?

DD: WMAC puts on races, which are a throwback to the “good old days” of racing. There aren’t any t-shirts or goody bags, just the opportunity for runners/hikers/walkers to compete and then mingle while warming up around a big fire afterwards. Entry fees are low and courses are challenging and scenic. I also like the fact that I can descend really fast without fear, the same trails in the summer would be slow going for me as I’d be afraid of blowing out an ankle.

In what ways has the sport evolved, and where do you think it is going?

DD: There seem to be a fair amount of growth in our region. There is a new series starting up this year in New Hampshire. Not sure where it is going, but with the small venues and narrow trails, I hope it stays “small”.

As a race director and competitor, what can you tell us about the snowshoe racing scene in the North-East?

DD: There is a great deal of enthusiasm in the Northeast. The Dion Snowshoe Series races average about 100 entrants per race and we race every weekend from the end of December to mid-March. Most weekends we have two races and there are a couple of opportunities to “triple” in a weekend. There were even a couple of night races last year, which were a blast. It is a great feeling when you see a road runner take to the winter trails and finish with a smile on his/her face.

You are a real numbers person; can you share with us some of your interesting stats about snowshoe racing, running or anything else of interest about the sport?

DD: I love stats, I keep track of everything. Here are the stats for the WMAC snowshoe series (now called Dion Snowshoe Race Series). Since 1998 they have put on a total of 97 races. The most in one year was 16. The total number of runners has been 5,888 or an average of 61 runners per race. The most was 163 and the fewest was 8. There have only been 8 races with a field of over 100, but 54 races have had over 50 finishers.

What motivates you to continue running and racing over the years?

DD: I just love the challenge. I really enjoy just being out there covering ground; it sure beats being covered by ground! I can’t imagine a day without running and running without races just doesn’t compute for me. I love to go out and test myself against the course/conditions/other runners. It is life affirming. 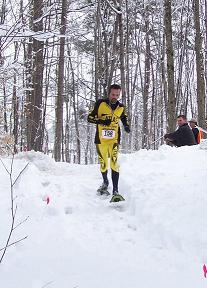 What are your goal races for the upcoming season?

DD: I’m coming off of a stress fracture (sacrum) that kept me from running for two months. I’m hoping to be in decent shape when we start racing in late December. My goal is to get to as many SS races as possible. I’d like to take a shot at winning the Dion series again this year, but I’m getting older and the competition is getting tougher. I’d also like to run most of the NH series races, I’ll have to miss one that is on the same day as my Northfield race.

Will you be running the US Championships this year? Any predictions?

DD: I hope to make it to the Champs this year, I haven’t raced them since it was held in Bolton Valley a couple of years ago. If I do go I’d like to do like I did at Bolton and run three races – the nationals, the open race, and the relay. More races = more fun! I’m also hoping to bring at least a couple of my CMS (Central Mass Striders) teammates with me.

When you’re not running, what else do you enjoy?

DD: When I’m not running, I’m injured and I don’t enjoy that at all J I enjoy some offshoots of running, I’m doing a fair amount of hiking and I’m hoping to through-hike the Long Trail (VT) next summer. I’m also on a quest to run in every town in Massachusetts. I’ve run in 315 of the 351 towns. I don’t think anyone has ever done that before.

What snowshoes do you use?

DD: I mix it up depending on the conditions at the race. I love the Atlas Dual Tracs, which are light and fast. I also use the Dion Racing shoes a fair amount of time, they are great shoes. Every once in a while I use my Tubbs’ 10k’s (the ones I won at Cranmore), I have direct mounted my running shoes onto them and like how they feel (they are very comfortable but heavier than the Atlas or Dion’s), I usually wear them in longer races.

DD: Dry roads getting to and returning from the race, deep tough snow with big uphills to slow down the faster guys, a roaring fire and a couple of Cokes after the race.

What was your most unique snowshoe experience?

DD: I don’t know if it unique but it is kind of funny. I got geared-up for a race and then went to the porta-john. Once inside I realized how difficult it was to turn around while wearing snowshoes in confined places.

DD: I like to grab a bagel and coke and get in the car and head for home.

DD: In SS racing everything takes longer. Give yourself a lot more time to get to the venue (icy roads, unplowed areas, etc). Give yourself extra time to warm-up, remember a mile in SS takes longer than a mile on the road. It also takes longer to get dressed and un-dressed. For a road race I’d warm-up 45 minutes before the race, for SS I start at least an hour before.

Thanks very much for the interview Dave and all the best in the rest or your season.

For more on Dave Dunham, check out his blog at www.ddmountainrunr.blogspot.com. 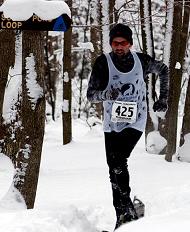