Our toddler grandson, Jack, loves to spend time in the woods behind our house here on the east coast of Canada. He also loves to get out in the snow. Our oft time, six month winter meant we were going to have to get him on his own snowshoes, or we’d be hauling him on a sled all season.

We didn’t want to invest too much money in case he wasn’t interested. So we hit up kijiji in March, 2014, just before Jack’s second birthday. The best we could come up with was a pair of plastic, Bear Paws. Snow conditions were excellent–just not for Jack who wanted nothing to do with them. So we put the paws away for what was left of the season, and hoped for the best next year. 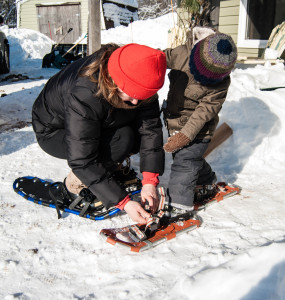 “How do you do that nana?” Always eager to learn, Jack watches me strap on his new snowshoes. Photo Credits: Laura Rose

This year was shaping up to be the winter that wasn’t, which meant we were still hiking in our boots the first week of January. One nice snowfall in the middle of the month, sunshine, and decent temperatures gave us the opportunity for our first outing. Jack was still a little reluctant, but once he saw his grandfather, uncle, and me on our shoes, he was eager to try out his big, blue bear paws. Turns out he’s a natural. With very little coaching and a hand up now and then, he was keeping up with us like a little pro. The paws are a little big, so we found another pair that work much better for him.

“Sometimes I like to snowshoe, sometimes I don’t”, this was Jack’s response to a second trip out on his new shoes. But, with a promise of trees that look like dinosaurs, we got him back on them, and headed to the woods. Once he started, he didn’t want to come home, and quickly took the lead. After four major blizzards, the trees have a permanent, heavy blanket of snow, making for ideal “snow fort” conditions. We spent some time sitting under a big spruce with its branches burdened down to the ground. It was magical. 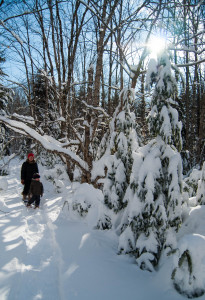 “Dinosaurs”. The evergreens have been heavy laden with snow for over a month. Photo Credit Laura Rose 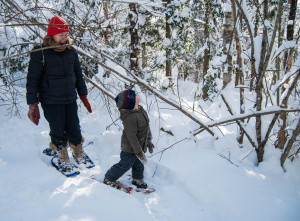 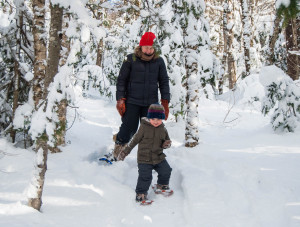 Traversing the hill without a tumble. Photo Credit: Laura Rose

Every year our local community center hosts a winter baseball tournament, and this year they added a snowshoe race to the festivities. It was open to all ages and was a timed sprint from home plate to first base–most of this year’s participants had never had a pair of snowshoes on their feet. Jack was first up, and the youngest and only child in the competition. The coordinator has a tremendous soft spot for kids meaning the rest of us didn’t stand a chance. Jack “won” his first “race” and the $25 prize money. He couldn’t stop talking about the “snowshoe man” and how he won the race. 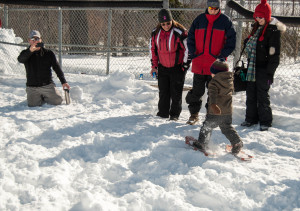 Runnin’ to win. Jack’s first race with his fans cheering him on. Photo Credit: Laura Rose

The key is to get kids out on snowshoes as young as possible and it’ll be as natural as breathing to them. Show enthusiasm for it yourself, and make it a family affair. Take time to notice your surroundings, and help them discover the beauty of nature. Let them set the pace without pushing them, and take short excursions for their little legs. I’m a firm believer in making new experiences as positive as possible, so listen to their objections and make it as fun as possible. 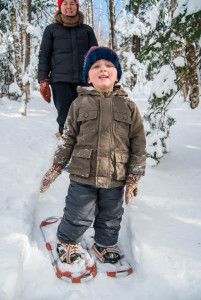 Record snowfalls have much of the maritime provinces blanketed in upwards of 350 cm–136.5 inches– of fluffy, white powder. At this rate, we’ll be buried til May–snowshoeing bliss and lots of opportunity for Jack to hone his skills. We’re planning a longer hike that includes a bonfire and a winter picnic, and we’ll probably be looking for more race opportunities for Jack. Anything to encourage life outdoors