For decades now, snowshoeing has received year-round publicity in Michigan’s Upper Peninsula, thanks to the efforts of Bishop Frederic Baraga, a Catholic priest who was dubbed the Snowshoe Priest back in the 19th Century.

Bishop Baraga didn’t simply decide to take up snowshoeing as a hobby. Instead, his devotion to spreading the word of God was the driving factor. Born in Slovenia and educated at the University of Vienna, Baraga later studied for the priesthood and eventually came to the New World in 1830.

Until his death in 1868, he traveled the length and breadth of the Great Lakes area, ministering to the people of the Ottawa and Chippewa tribes. He also ministered to the immigrants who came to the Upper Peninsula to work in the iron and copper mines. 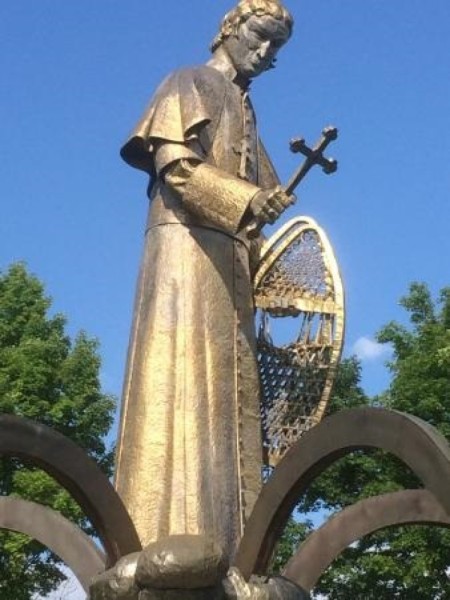 The shrine of Bishop Baraga is in L’Anse and is 35 feet tall! Photo: Rick Stedman

The Start of the Snowshoe Priest

In his diary, Baraga recounts that during summer travels around the region. He often couldn’t get anyone to attend his church services. This was due to the need of the people to work as much as they could during the good weather. As such, he discovered that if he traveled during the winter months and held services, hundreds of people of all ages would come several miles to attend.

It was his travels through hundreds of miles in northern Michigan’s harsh winters by snowshoe that earned him the affectionate title of “The Snowshoe Priest.” He continued this effort long into his 60s, and some winters recorded as much as 700 miles on snowshoes. Considering this part of Michigan averages above 300 inches of snow annually, Baraga cut trails on many of his treks.

Putting that into perspective, Bishop Baraga established missions in the northern Michigan towns of L’Anse and Sault Saint Marie. Today, if you are driving that distance, it would take about four hours to cover the 235 miles. In the 1850s, this humble man covered that distance on snowshoes and then some.

Examples of his legacy are at various locations throughout the Upper Peninsula.

In Sault Saint Marie, you can follow the stenciled snowshoe footprints on the sidewalks beginning at the Baraga House on historic Water Street. Following the path, there are four buildings you can also visit for a small admission fee, including Kemp Coal Dock Office, the Schoolcraft’s Indian Agency Office, and the Johnston House. The Snowshoe Pathway, completed in 2013, also links five historic churches in the downtown area. Just follow the stenciled path.

Baraga was consecrated Bishop of Upper Michigan in 1853. The U.P includes its adjacent islands, with Sault Saint Marie designated as the headquarters. The Baraga house was purchased for him in 1864, and the bishop affectionately referred to it as his palace. He resided there until 1866 when the diocese headquarters moved to Marquette, Mich., which was more centrally located. 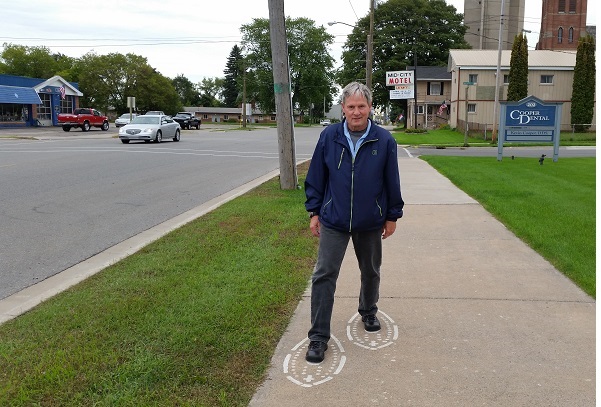 The most incredible tribute to Bishop Baraga is the Shrine of the Snowshoe Priest in L’Anse. On a stretch of US 41, between the towns of L’Anse and Baraga sits a giant copper figure that rises six stories above the Red Rocks Bluff overlooking Keweenaw Bay.

The statue of Bishop Baraga is 35 feet tall and weighs four tons. It floats on a cloud of stainless steel, supported by five laminated wood beams representing Baraga’s five major missions. With its breathtaking panoramic views, the larger-than-life shrine depicts Baraga clutching a seven-foot-high cross in one hand and a pair of snowshoes in the other hand. The snowshoes themselves measure 26 feet in length. Whether you’re religious or not, seeing this incredible structure will move you to reflect!

Throughout the Upper Peninsula of Michigan, Bishop Baraga’s legacy can be found in several locations.

The village of Baraga, Baraga Township, Baraga County, and Baraga State Park are all named in his honor. Moreover, a few years ago, Grand Rapids erected a 7.5-foot tall statue of the bishop in Cathedral Square. The statue honors his efforts in 1833 of establishing the first Catholic mission in that location.

He was the first bishop of the Roman Catholic Diocese of Sault Sainte Marie, Mich., now the Diocese of Marquette. Bishop Baraga died on Jan. 19, 1868, in Marquette and is buried there in the crypt beneath the Cathedral of Saint Peter.

For all he accomplished while ministering to many in northern Michigan, Bishop Baraga was named venerable in 2012, the first step being declared a saint by the Vatican. But regardless of the accolades, Bishop Frederic Baraga will always be remembered most fondly for his efforts as the Snowshoe Priest.

Have you visited the tributes to Bishop Baraga? Please share your experiences with us in the comments below.

Read Next: What’s a Yooper? Snowshoe History, Trails, and Races in Michigan’s U.P.